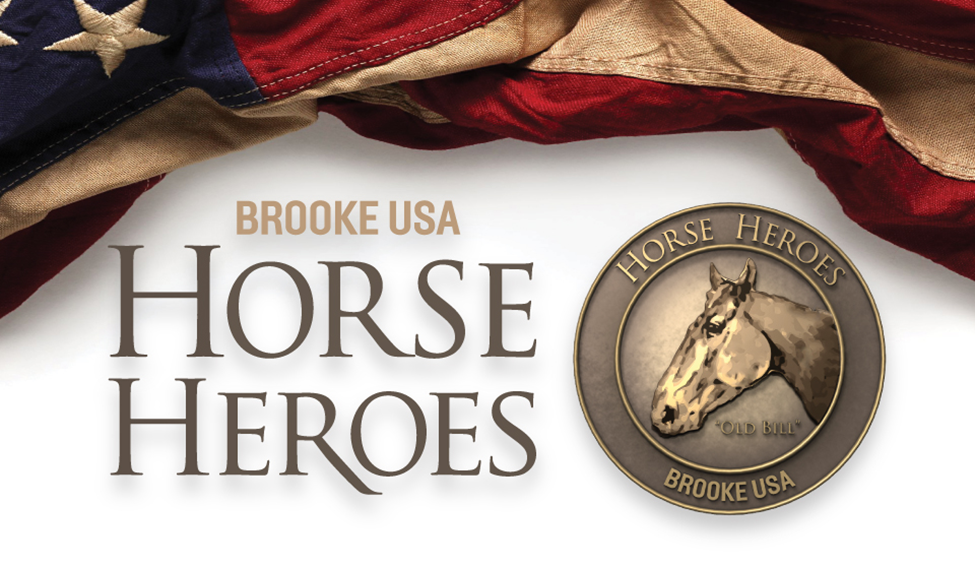 Horse Heroes: We Will Never Forget Them

Approximately one million American horses and mules served Allied forces in Europe during World War I. Many were used by the British and French armies well before the United States entered the war. 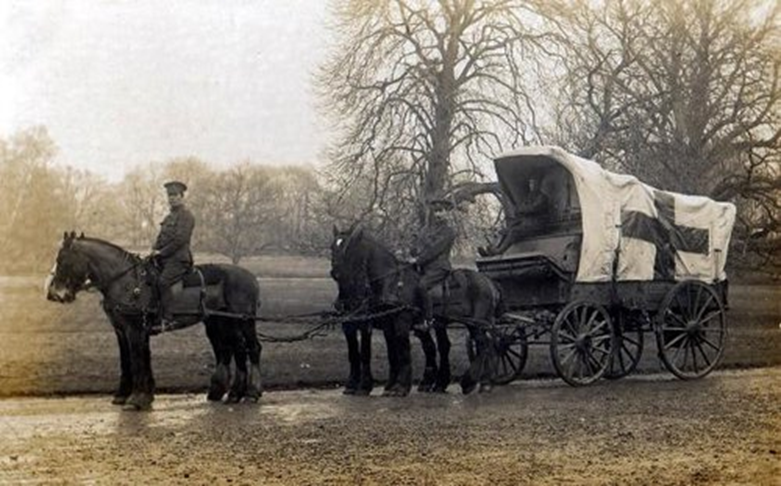 The first wave of American horses and mules arrived in France in late 1914 – only a few months after the war began in Europe. Though hard to understand today, horsepower was an essential part of every army during World War I. There was no great emotional debate as to the morality of sending them to war, though several humane organizations sent supplies and funds to assist in caring for them on the battlefield.

They pulled nearly every sort of vehicle and carried the mounted fighters of the cavalry.

These animals carried men into battle and wounded men to safety. They carried food, water, medical supplies, ammunition, gun carriages and other supplies to the front lines across difficult terrain, in brutal weather, often surrounded by dead and dying men and animals.

For these animals, the sights, sounds, and smells must have been as dreadful as they were for the men. They provided immeasurable support to the military, and only 200 came home after the war.

Where did all these animals come from? Wasn’t shipping a million horses and mules to Europe a tremendous drain on the supply of animals in the U.S?

How did they get to Europe?  Where exactly did the fighting take place, and where were our horses? 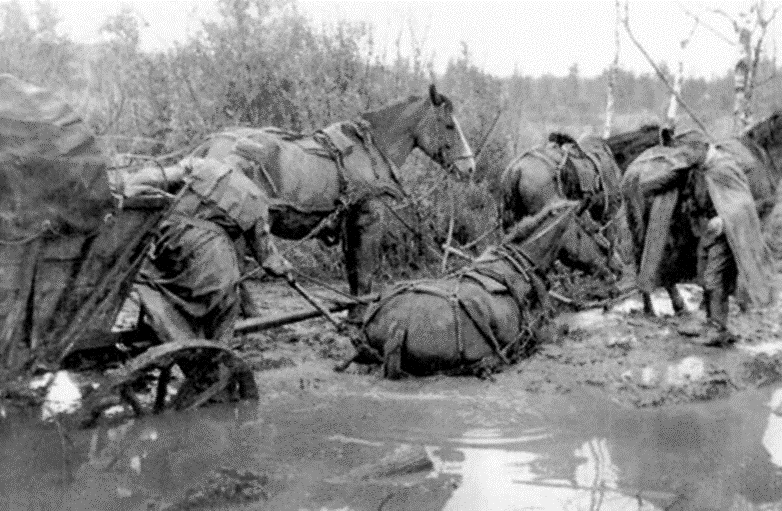 What were the conditions there? Why was there so much mud?

They did their part, in spite of being terrified and often while sick and wounded themselves, and they worked until they were annihilated by guns or poison gas, or simply died in their harnesses from exposure, disease, and sheer exhaustion. In total, eight million horses died in WW1 on all sides, including hundreds of thousands of American horse heroes.

"Quite two thirds of the horses and practically all of the mules used in the British Army in France and the other theatres of war come from the American continent...
"What we should have done had not North America's vast contribution to the world's war horse supply been a real fact, goodness knows..." – Capt. Sidney Galtrey, author, "The Horse and the War"

Who trained all these animals? Not to mention, their riders, drivers, grooms, farriers, and stable hands?

"Great as has been the success of the American gun horse, still greater, though perhaps less appreciated, have been the war qualities of the American mule...probably the most serviceable and satisfactory animal used in the war." -- Brigadier-General T.R.F. Bate 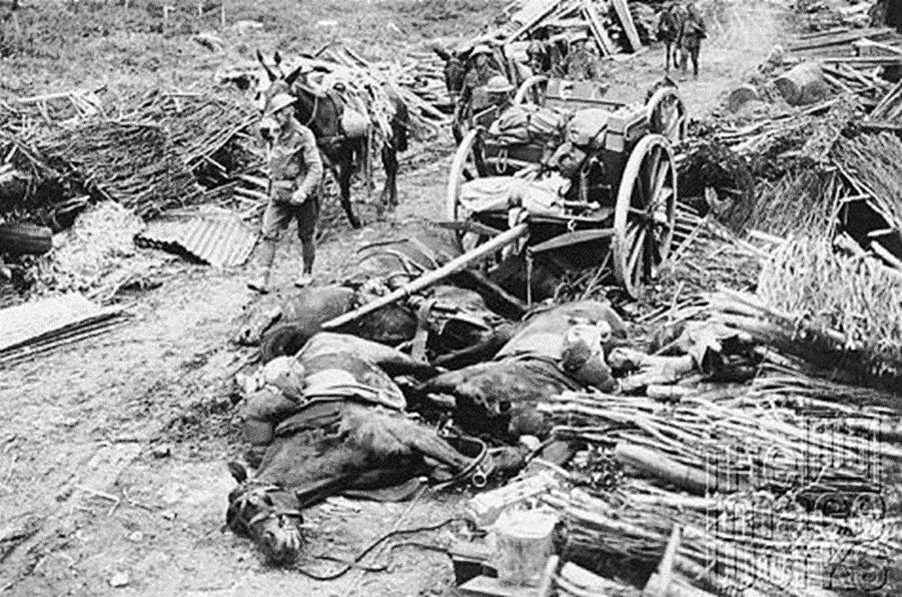 "I believe that every soldier who has to do with horse or mule has come to love them for what they are and the grand work they have done and are doing in and out of the death zones. I want the public who have had no opportunity to know to share that admiration." -- Capt. Sidney Galtrey

What about veterinary care, for wounds, poison gas, and disease?

How many were there? What happened to them and where did they go after the Armistice?

Most American horses were used by either the U.S., British, or French forces. Many spent their war in France, but if they were bought by the British Remount Service in the U.S., they might have served in Egypt or other theaters of war. Regardless, at the end of the war, there was neither funding or political will to bring the working horses home. Horses were a commodity, and just as armies today routinely abandon motor vehicles, so these armies sold off their horseflesh. Some went to slaughter, if too old, worn out, or injured to be sold as working animals. These may have been the lucky ones.

If they were sold in Europe, they might well have gone to farmers who had been using horses before the war, who understood horse care, and lived in a temperate climate where grass and other forage was readily available. In short, these horses had a reasonable chance of going into a good life after the war. 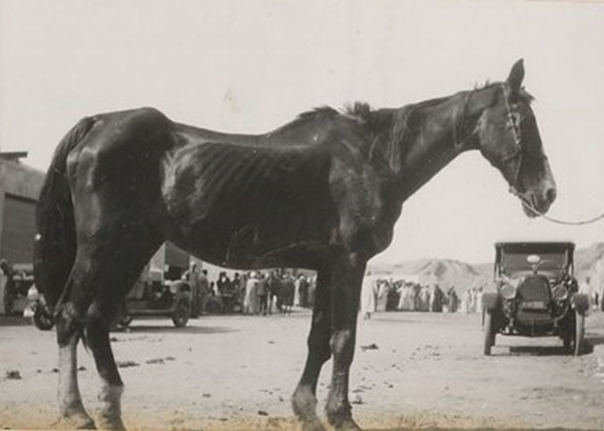 This was not true in the Middle East, where the British sold thousands of horses in Egypt. There, the hot dry climate made forage expensive. Donkeys were the usual equine draft animal. Able to survive on far less than horses, the donkeys still were usually miserably thin and often ill-treated. Except for the Arab nobility, there was no cultural tradition and little knowledge of horse care. Most of the unfortunate horses that were sold in Egypt - including, quite possibly, horses that had been purchased in the U.S. - went into lives of hard labor and utter misery.

Dorothy Brooke and the "Old Warriors"

Amazingly, some were still alive by 1933 – nearing or past age 20, which was considered old for a horse at that time, and in horrible condition – lame, emaciated, and with open sores and scars covering their bodies. It was then that they were discovered by Dorothy Brooke, the wife of British Army Major General Geoffrey Brooke, when she accompanied her husband on an assignment in Cairo.

A woman of compassion and a dedicated animal lover, Dorothy’s first impulse was to buy back these horses and send them back to England to live out their days. But she soon realized that there were far too many horses to be able to put this plan into action. A practical and resourceful woman, Dorothy soon changed her program. Unable to give the horses a better life, she decided to buy them, keep them for a few days with good food, gentle care, and love, and then give them a merciful and quick end. 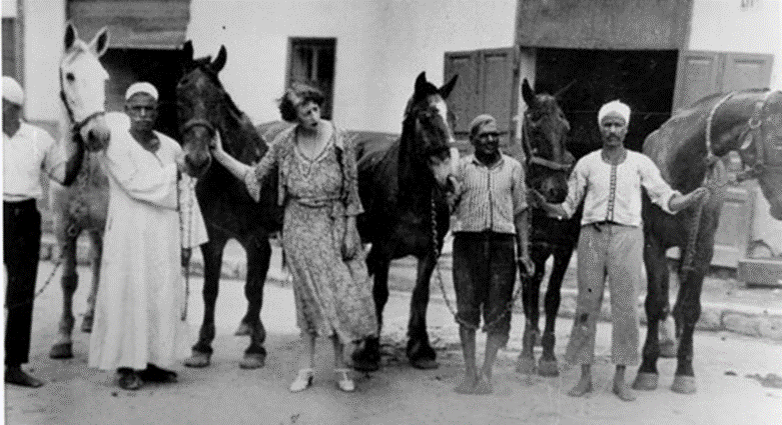 She set about buying back every old warrior that she could find in Cairo, and over the course of a few years she had rescued 5,000 war horses. Seeing that the owners would simply take the money from the old war horse and buy another animal, which would be treated just as badly, she founded the "Old War Horse Memorial Hospital" and began providing care for native Egyptian horses, mules, and donkeys.

Today, their memory is kept alive and honored by the world’s largest equine charity. Headquartered in London and known to millions of people across the globe as simply “The Brooke,” the charity Dorothy Brooke founded has brought hope to animals and their owners since 1934. Brooke's over 900 employees work hands-on with owners, governments, veterinarians, farriers, and other groups to provide practical and sustainable solutions to improve the welfare of working horses, donkeys, and mules in the world's poorest countries. In the U.S., Brooke USA is headquartered in Lexington, KY and has a satellite office in Wellington, FL.

As Dr. David Jones, Chairman Emeritus of Brooke USA has said,
"So often we forget that the lives of working horses, donkeys and mules are intertwined with the lives of us humans. It is history that shows us the responsibility we have toward their ongoing care and improved quality of life. Certainly Dorothy Brooke saw this many, many years ago."

Brooke USA is proud to serve as a partner organization of the World War I Centennial Commission. We hope this web page will help you understand the role of horses and mules in the Great War, and how their legacy still supports the world’s neediest animals today.

"Their contributions were enormous and so was their suffering; the terror that these animals must have experienced is incomprehensible. But without their loyalty and sacrifices on a massive scale, the war's outcome - and now the world - would be very different." -- (Ret) Major General Sir Evelyn Webb-Carter, Chairman, Brooke International

Dorothy Brooke was a compassionate woman, and she realized quickly that most of the abuse of these animals was due to ignorance rather than intentional cruelty. Also, she soon saw that the lives of the owners were difficult in the extreme, and that they had no resources or knowledge to provide better for their animals. From these twin realizations came her commitment to help both equines and their owners to find a better life. This value system still guides Brooke USA’s work today. 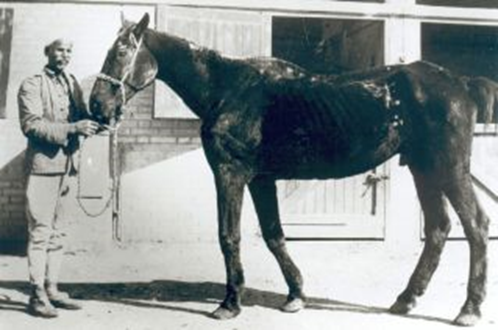 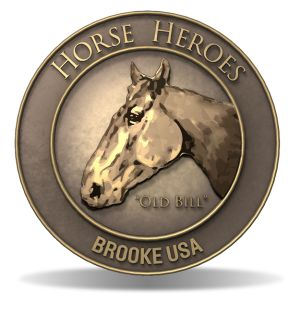 Upon meeting one of the first of her old war horses, Dorothy Brooke wrote about "Old Bill:"

"I shall never forget the shock he gave me. I stood staring at him. Heaven knows the other horses were bad enough but somehow he was different.

"Obviously he had been a good horse, once. He had been happy and well fed as other horses had never been... He had moreover served in Palestine and had suffered hardships in that campaign as few horses have endured in modern times. And then we had sold him into this."

Former war horse "Old Bill" left an indelible impression on Dorothy Brooke's heart. He became the inspiration for her work to save all that remained of his fellow war horses in Cairo. For the World War 1 Centennial Commemoration, Old Bill served as the inspiration for the Horse Heroes Medal, designed for the occasion by Brooke USA.

Today there are approximately 100 million horses, donkeys, and mules in the developing world. It is estimated that 80% of those working equines are suffering from preventable problems. Brooke USA-funded programs touch the lives of many of them annually, supporting millions of people in their human families each year.

The tragedy of WW1 gave birth to a vision, and today the Brooke family of charities, including Brooke USA, form the world's largest international equine welfare organization. Brooke USA funds help to support equine welfare programs around the world. These programs provide practical and sustainable help by teaching owners how to improve the welfare of their animals. Learn more about what Brooke USA does.