Teamsters and the Quartermaster Corps

While the cavalry was looking to France for modern ideas on horsemanship, the Quartermaster Corps continued the old ways, because harness, wagons, and other vehicles had not changed since the U.S. Civil War.

Delivering supplies, ammunition and food fell to the teamsters, that is, the drivers of supply wagons. The Manual of the Quartermaster Corps wasted few words on what teamsters were expected to know – there is a distinct sense that this was all old knowledge, that it was being set down because it needed to be in writing somewhere, but not much formal instruction should be needed by those who were given these duties. 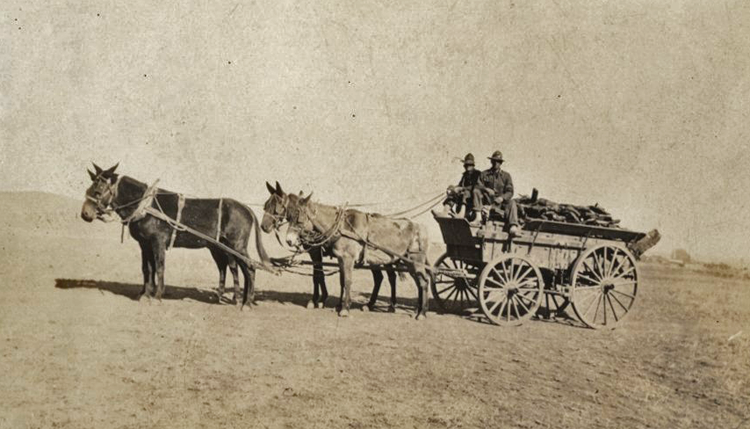 The wood hauling detail. “Teamsters must have a thorough knowledge of adjusting the harness to the animals and of driving. They should also be familiar with the methods of receiving, stowing, and securing the loads on the wagons.

“No reading matter of any character will be taken on herd to distract their attention from the care and watchfulness over the animals that they may not stray off or stampede.

“Teamsters will look over the feet of their mules every morning the first thing and every evening after unhitching, clean out the feet and see if the shoes are loose. It is a good idea to tap the shoes lightly with the knife handle or hammer; if the animals flinch there is something wrong. 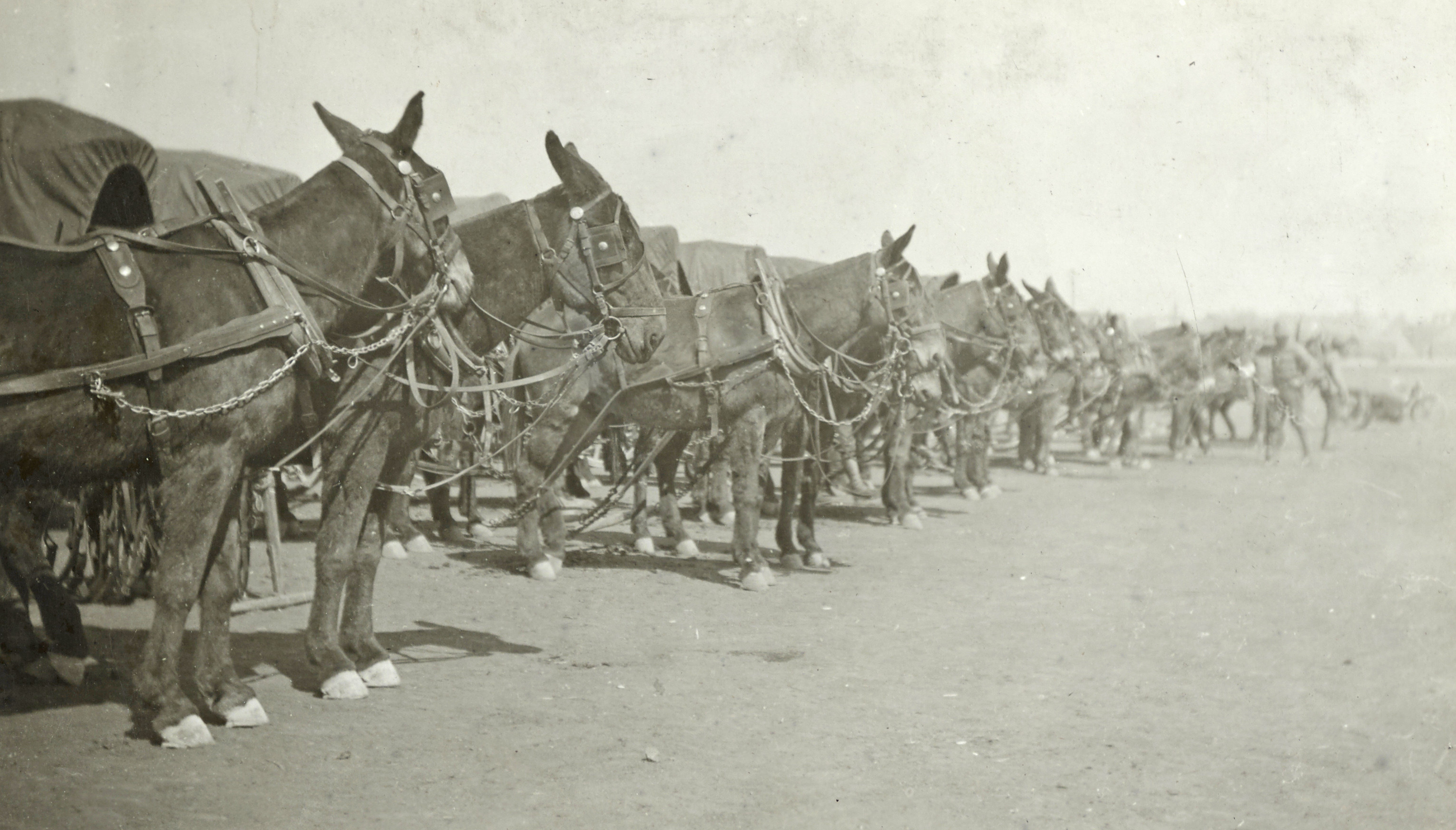 Inspection of mules and wagons at Camp Devens, Massachusetts“In pulling heavy loads or on heavy ground if there is any liability of the team stopping, the teamster should stop the animals before they get stalled. Many animals will not pull again on a load in the same place where they have met with a resistance which has impressed them as insurmountable. If the team should get stuck, it may be induced to try again by turning the tongue slightly to the right or left and then getting all off altogether.

“In starting a team with a heavy load or in any situation where it is necessary to get the united power of the animals, the reins should be hold fairly tight so that the animals may be made to feel the aid and guidance of the driver.”1 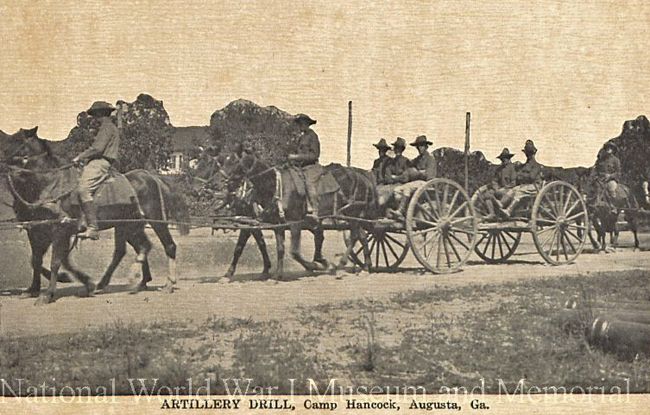 Artillery drill, Camp Hancock, Georgia, 1918.Horses pulled guns, and therefore the gun crews had to know how to care for the horses. They also had to know at least a bit about riding, because the horses were not driven by a driver sitting on the gun carriage, but rather they were ridden while in harness, one horse in each pair wearing a saddle as well as harness and that pair being guided by the rider.

A separate manual was published for pack train management, and it was recognized that this branch of the supply corps had some special expertise. Packers, also known as muleskinners, were not regarded as a sophisticated bunch, but they had skills that few others had – that is, how to handle a mule. Again, despite the special manual, there was no special training course for these men. They learned on the job, from more senior troopers. 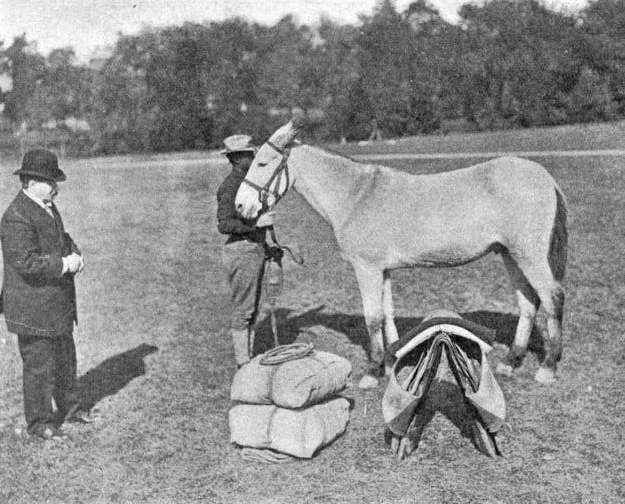 Henry Daly, Chief Packer for the Army, instructing how to pack a mule.“All pack trains should make practice marches of from 5 to 10 miles per day, when not otherwise employed, so as to keep the animals in hard muscular condition, and in order that daily examination may be made as to whether the "rigging" is properly fitted. Any defects in the "rigging" or equipment should be noted in order that steps can be taken to remedy them.

“On these practice marches the men will be instructed in their duties, both in bivouac and in camp; and the animals will be trained. 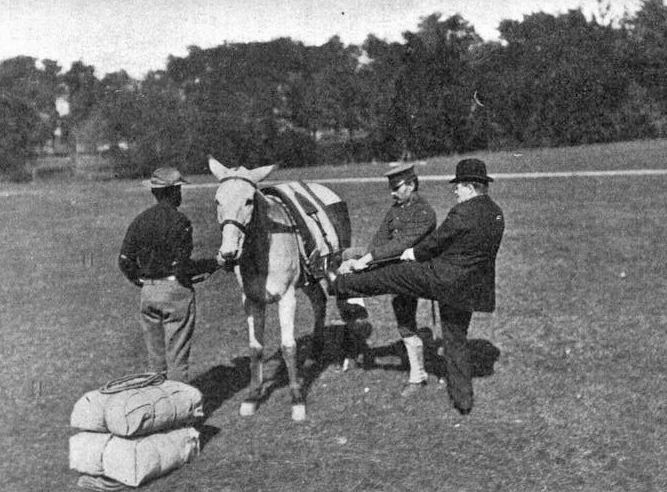 “Manual of Pack Transportation, Quartermaster Corps, 1916, contains a great deal of useful information on the subject of packing.”2

But the rules, however learned, had to be followed:

“Packers found in any way maltreating animals under their care should be subjected to rigorous disciplinary action. This rule will be rigidly complied with by all members of the pack service.”3

There were other personnel attached to the pack train, such as cargadors, who were second-in-command to the pack master. They were expected to “keep the animal’s bodies sound, and failure to do this will prove his unfitness for the position.” The cargador also did “repairs to aparejos and equipment, and was responsible for making up of all cargo, equalizing the packs, and loading animals according to their strength and condition.” 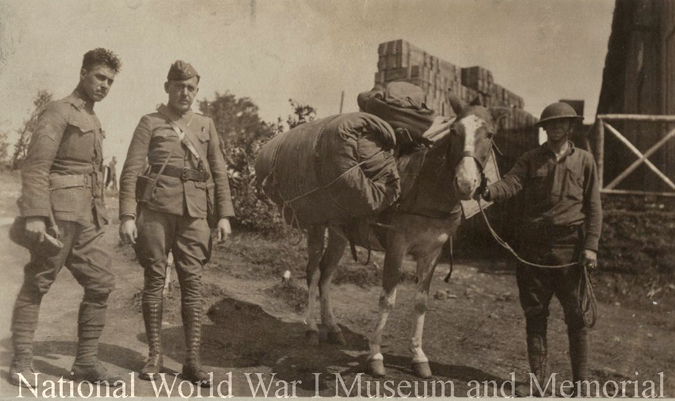 An infantry pack horse.His duties included some paperwork, such as keeping a “memorandum of all cargo received and to whom Issued, together with dates, marking and tagging packages when necessary.”

There were even mundane aspects to his job; “In bivouac he will see that all halter shanks are gathered and placed on rigging, and all blinds placed on cargo before being covered up.

"He will be responsible that all aparejos are marked with the number of the animals respective coronas, and that all coronas are kept clean.”4 (The corona is the band that goes under the mule's tail, and keeping it clean was a daily chore, but necessary because a dirty corona would chafe and rub the skin raw.) 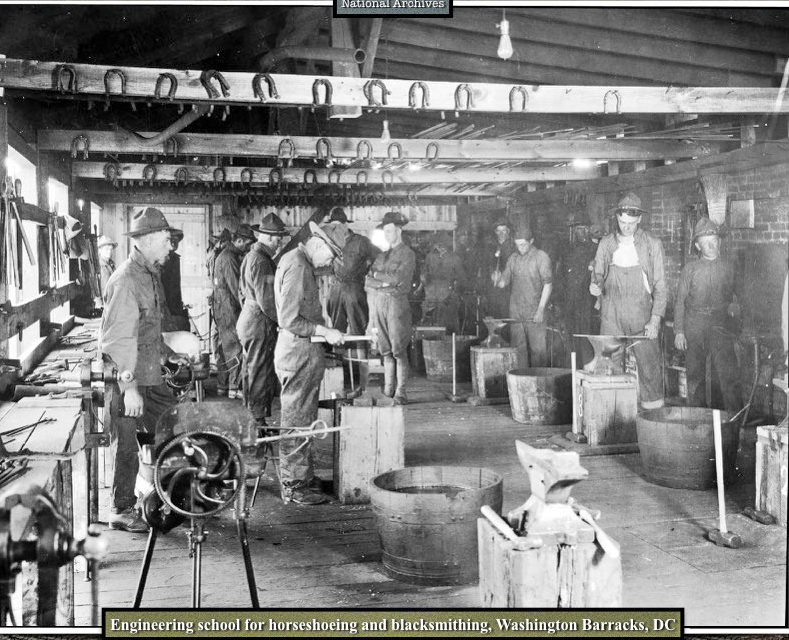 Horseshoers school, Washington, DC.Horseshoers were essential personnel for any army. They attended a four-month course that included significant practical experience as well as theory and knowledge of equine anatomy.

Horseshoers performed the services that farriers perform in the century following the war; during the war, the term “farrier” referred to a trooper trained in equine disease management, a sort of equine medic, or assistant to the veterinarian.

Horseshoers were responsible for keeping all the animals shod and trimmed, which could be an enormous job in the mud of France. For a pack train, for instance, the horseshoer must “keep on hand for field service 200 shoes properly fitted, together with the number of nails necessary, he will also be equipped with other requisites for properly shoeing the train. He will fit and shoe all animals of the train, and must have a thorough knowledge of the approved methods of fitting shoes, and of the intelligent care of the hoof.” 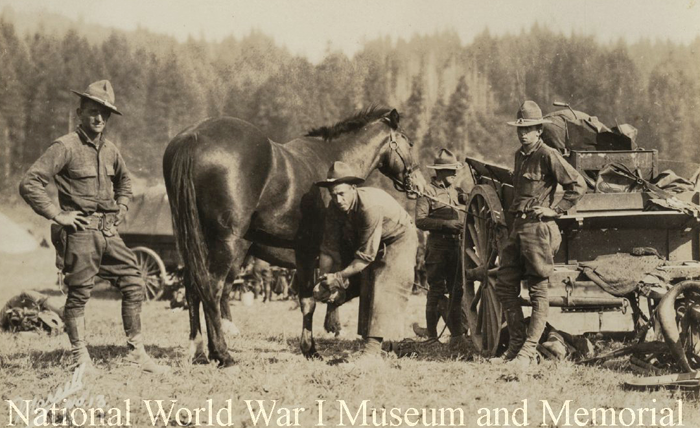 Shoeing a horse in the field. He also assisted as the train was on the move, by keeping the animals close to the bell animals, keeping correct count of the animals as they were turned loose, reporting any accident promptly to the packmaster or cargador.5

He also kept watch while the train was traveling, riding up behind and keeping watch on the feet of the animals, to anticipate what would be needed at the next halt – it was expected that some of the animals might have to be reshod. With multiple halts per day, this must have been a never-ending task. He also was responsible for picking up all shoes cast by the animals so that they could be replaced at the halt, “provided the shoes are serviceable. It will he his duty to put in additional nails should he observe that shoes on the animals are loose.”6 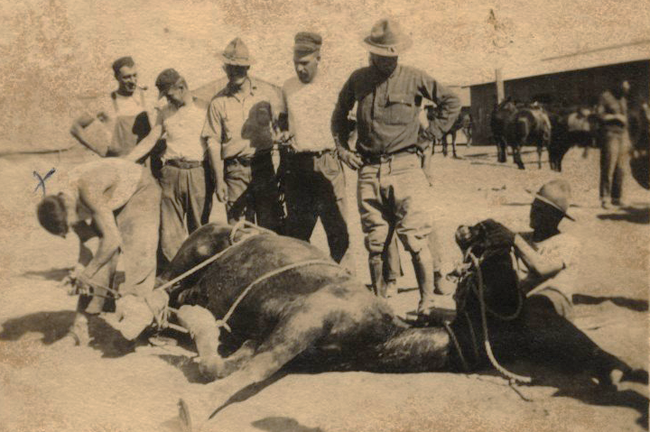 Shoeing a hard one. If early experiences with shoeing were unpleasant or frightening, a horse or mule might not be able to be shod except by being restrained. This was not considered desirable but was not reason enough to get rid of the animal.Even the pack train cook had equine duties! In addition to getting all meals ready on time, the cook was responsible for getting the animals rounded up and for heading up the pack train, leading the bell animal and setting an appropriate pace. Cooks must have been known to want to take along more mess equipment than was specifically allowed, because the regulations state that, “Carrying heavy or unnecessary utensils on the march Is prohibited.”7