The French were very concerned about American animal care because they saw it as a waste of precious war resources. But there was another reason as well. When the A.E.F. turned sick horses out into the countryside, they were setting them loose in French farm country. Quite understandably, the French feared for the health of the animals on their farms, and for their agricultural production.

Food was scarce already, and there was a legitimate fear that epidemics of animal-borne disease could seriously impact the remaining production. Some diseases, notably glanders, could also spread to humans and had over 90% fatality rates.

The French pursued their concerns through diplomatic channels, and after several inquiries were made, a joint veterinary commission was established to inspect American animal care facilities.

This was an unprecedented action and was conducted in secret. The French were very aware of the delicacy of the entire endeavor. One official memorandum noted that “the mission was to make inspections without causing friction between the two governments,” and “Officers of one army reporting critical conditions existing in another have a ticklish mission.”1

The reports from this Liaison Mission reveal how truly awful the American animal care was. Operating from May 4 – August 4, 1918, the Mission inspectors were looking at an army that had been in France for nearly a year, and in fact was only months away from the end of the war. They visited a total of twenty-three operations, all across France, including operational divisions, hospitals, training camps, remount depots, a detachment of engineers running a logging operation, and a U.S. collecting center for newly-purchased French horses. (It was the report of this last inspection that caused the French to cut off the supply of horses they were selling to the U.S.).2

The gruesome conditions that were documented showed that there was simply not a big concern about the health of animals. Conditions did vary widely from base to base, but most were poor. One of the U.S. vets on the Liaison Mission described what they observed at one camp:

“Soldiers were turning a herd of disease-harried horses from a muddy corral to a common trough, the water of which was saturated with nasty nasal discharges floating thick as moss on a stagnant pool. Among these unfortunate horses there was strangles in all its colorful variations; pneumonia and serofibrinous pleurisy; purpura hemorrhagica and pink eye; mange, glanders and cutaneous injuries; and claudications galore. The agony and morbidity among these miserable unhospitalized animals ran from 75 to 80 per cent, and there were no remedial measures in force, and obviously none were contemplated.”3 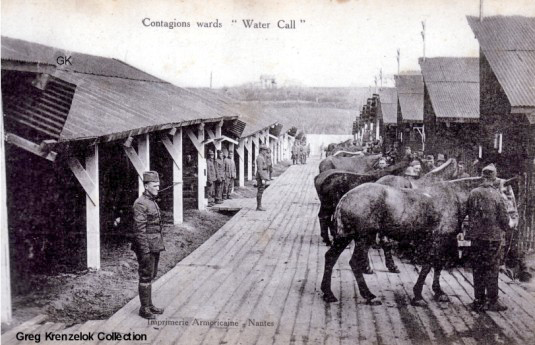 In contrast to what was observed in 1918, this water call at Veterinary Hospital 9 in 1919 shows an organized (and perhaps staged) water call for the contagion ward. From the collection of Greg Krenzelok.

They also found a general lack of respect for veterinarians because they were usually junior officers and were outranked and, thus, not consulted regarding any decisions to be made about animals. In one case, the commanding general was so apathetic about the welfare of his animals that he reassigned the personnel of the mobile veterinary unit to Military Police duty.4

Probably the worst conditions were at the advance remount depot at Bourbonne les Bains, one of only 3 depots that were entirely of American construction.5 It had been inspected earlier, in February 1918, before the U.S. had fought a single engagement, and found to be “an aggregation of torture chambers.”

Animals “were found mired in mud up to their stifles and knees. Others, by the scores, were mired to their fetlocks, swaying back and forth in vain attempts to extricate themselves. Moreover, the weather was bitterly cold and a high wind was blowing cruelly through open sheds called remount stables.”

This was in a depot over 80 miles from any dangerous activity. The Liaison Mission commented that conditions there would always be substandard because it was built on deep clay soil that held water and would always be muddy. But poor discipline among the troops and poor veterinary management also contributed to the appalling circumstances.

As a contrast to this finding, and an example of how two branches of the service viewed the same picture very differently, the Remount Service in its final Operational Report after the war, called out Bourbonne les Bains as “deserving special credit” for “overcoming the handicaps under which they began operations.”6

Noted in the report was the task of bringing in tons of crushed stone to solve the problem of muddy corrals. Perhaps by the end of the war, conditions had improved, but what had happened before remains a permanent shame to those who caused the problem by siting the depot where they did and failing to remedy the conditions sooner, causing untold and completely needless suffering.