The only medication carried by every veterinarian that was given internally was for colic, that is, digestive upset that can range from mild to fatal, depending on where in the digestive tract the problem occurs and whether the intestine has become twisted, which is always fatal if not surgically corrected – unlikely on the battlefield.

Colic medication would be given as a “drench,” that is, by tipping a leather-covered long-necked bottle into the upturned mouth of the horse and hoping that most of it was swallowed rather than running out the sides of the mouth.

Even today, the first course of action for colic is generally a sedating medication, often delivered into the mouth but sometimes injected. The cannabis of 1918 has been replaced by more modern sedatives, but the desired effect is the same, to quiet the digestive tract and hopefully allow the offending food or gas to pass through.

The list of supplies carried by veterinarians in 1918 includes many of the things still carried by vets in 2018 – the difference being that vets one hundred years later have a much, much longer list, with many medications, vaccinations, treatments, and tests not yet available during the Great War. Bearing in mind that antibiotics were many years into the future, and that most diseases had little in the way of specific treatment protocols, the list of supplies leans heavily toward cleansing, disinfectants and salves. There are no needles or suture materials, no scalpels, no numbing agents, no anti-inflammatory medicines – all of those would have been available in veterinary hospitals but not at the battlefront level.

The Army Manual for the Quartermaster Corps of 1916 devotes part of page 492 to listing the following as adequate for 100 animals for 10 days: 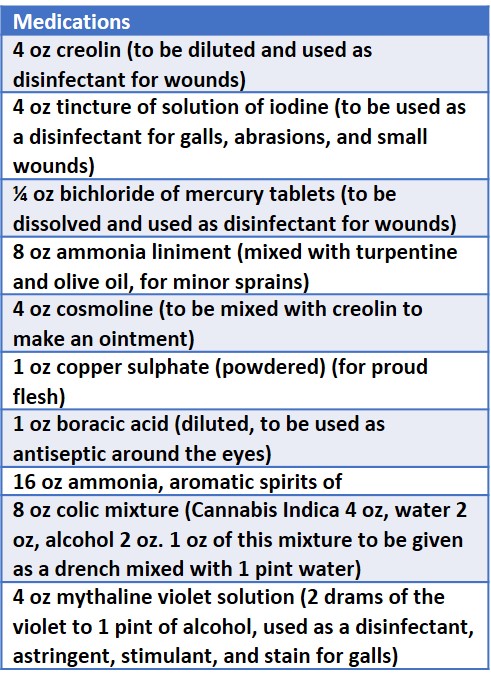 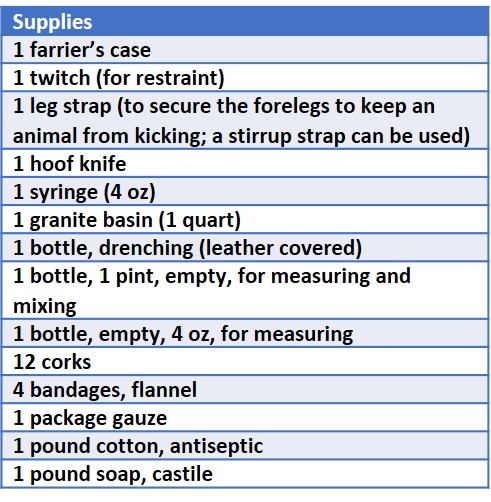