World War 1 was difficult for veterinarians. Experts on the care of animals and well trained in means to fight against disease and injury, they found themselves up against an unexpected adversary – the bureaucratic processes of the U.S. Army. 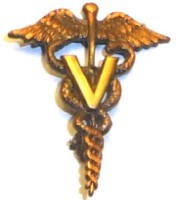 Amazingly, at the outbreak of the war the army was very unprepared to see to the health of its largest asset other than its men; that is, its animals. The direct result of this neglect was enormous suffering on the part of the animals and degraded performance on the part of the army itself. For instance, by one estimate, approximately 76% of the mule casualties in the A.E.F. occurrerd as a result of inadequate veterinary care, not as a result of battle injuries.2

Veterinarians had little say in planning for war because they were a small group of staff officers spread across many organizations, without any Army-wide standard procedures, plans, or organization. The upper echelons of the army failed to make veterinary care more efficient until near the end of the war. The advice and requests of veterinarians were routinely ignored until the Veterinary Corps was finally recognized as a medical branch of the service in the summer of 1918.3

After the war, the chief veterinarian of the A.E.F summed up his opinion:

“More horses and mules in the U.S. Army in 1918 did not mean more transportation in France for the Army but it meant more waste of animals, time of men and money. The needs of the army could never be met unless animals were returned to service by good medical care and recovery. We could not continue to have such a great loss and waste of animals due to lack of care and poor management and keep the Army going.”1

The Veterinary Corps Before World War 1

The old Veterinary Corps, as it existed at the beginning of the war, consisted of two officers for each horsed regiment and 17 officers as inspectors of animals and meats. Veterinarians had always been assigned as individuals to various units, with the result that there were few standardized procedures that were followed across the entire army. Vets had no command structure of their own, no way to rise up through their own ranks, set their own standards, or appeal for their own budgets or supplies. 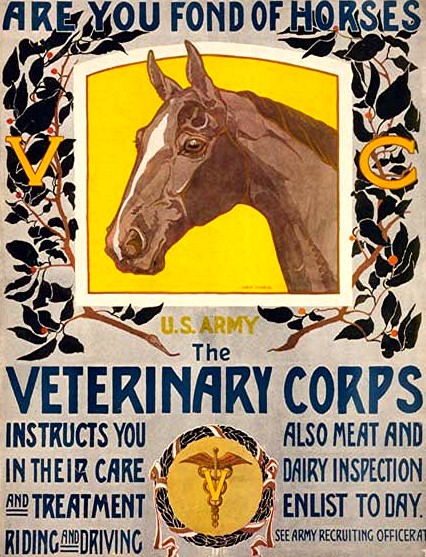 For the most part, and this became very important in France, they were trained well as individuals but had little understanding of how they fit into the larger whole of the army. Thus, they were often frustrated when their requests for supplies, medicines, or changes in care went unanswered.

If the unit to which they were assigned was led by a cavalry officer or any officer who was a horseman, things went well. If it was not, their pleas often fell on deaf ears.

In 1916 the first of several reorganization orders was issued for what would eventually be recognized as the Army Veterinary Corps. The U.S. entered the war less than a year later, and hundreds of thousands of horses and mules very suddenly needed veterinary attention.

During the war the multiple reorganizations placed veterinarians themselves back and forth from one organization to the other; at various times, they were under the command of the quartermaster (a supply organization); the remount service (a horse-mounted fighting organization) and the surgeon general (a medical organization).

Partly as a result of the war, the Veterinary Corps became a recognized command within the army. But during the war vets were passed back and forth among several commands, little able to control or even influence what happened to animals, let alone what happened to veterinarians.

Army Veterinary Training in the U.S. 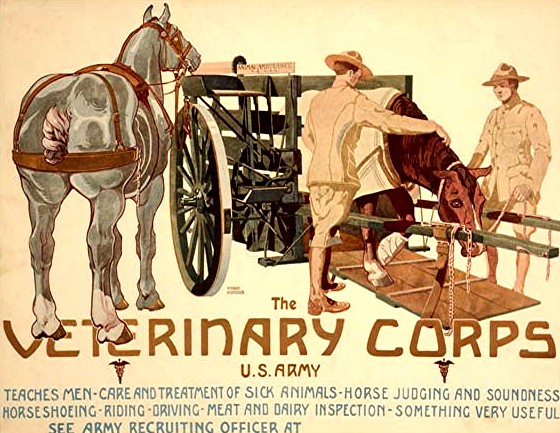 The newly-minted Veterinary Corps organized three training schools for its personnel during WW1: one for enlisted men at the Medical Officers' Training Camp, Fort Riley, Kansas; one for officers and enlisted men at Camp Greenleaf, Georgia; and one for organizing, equipping, and training veterinary units for overseas service at Camp Lee, Virginia.5

These schools did not start operating until nearly a year after war was declared, and of course ceased operations a few months later when the armistice ended the war.

The school at Fort Riley was established February 4, 1918. At that time authority had been given to allow men to enlist in the Veterinary Corps who were both younger and older than the draft age. Practically all men who enlisted west of the Mississippi River were sent to Fort Riley for training. This school was in operation from February until September 1918, and 540 men were trained, most of whom were sent to Camp Lee in Virginia for further transfer to overseas service.6

Camp Greenleaf in 1918.Camp Greenleaf was also busy: at the time the armistice was signed, about 200 enlisted men had been trained; approximately 490 officers had been graduated; 240 officers were in training, and 655 enlisted Medical Reserve Corps men (graduate veterinarians) had reported for duty, of whom 86 had been commissioned and the rest were candidates for commissions.7 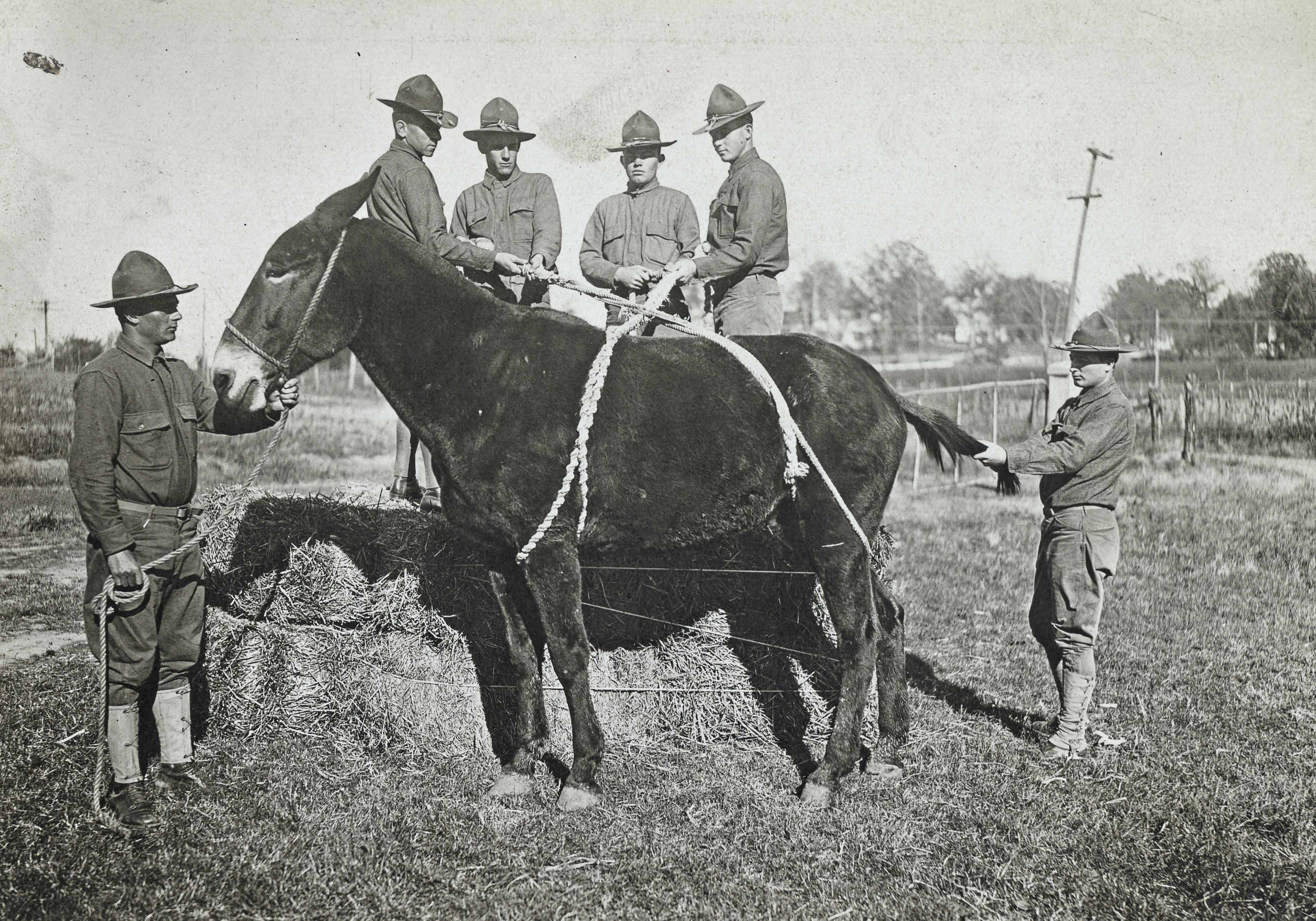 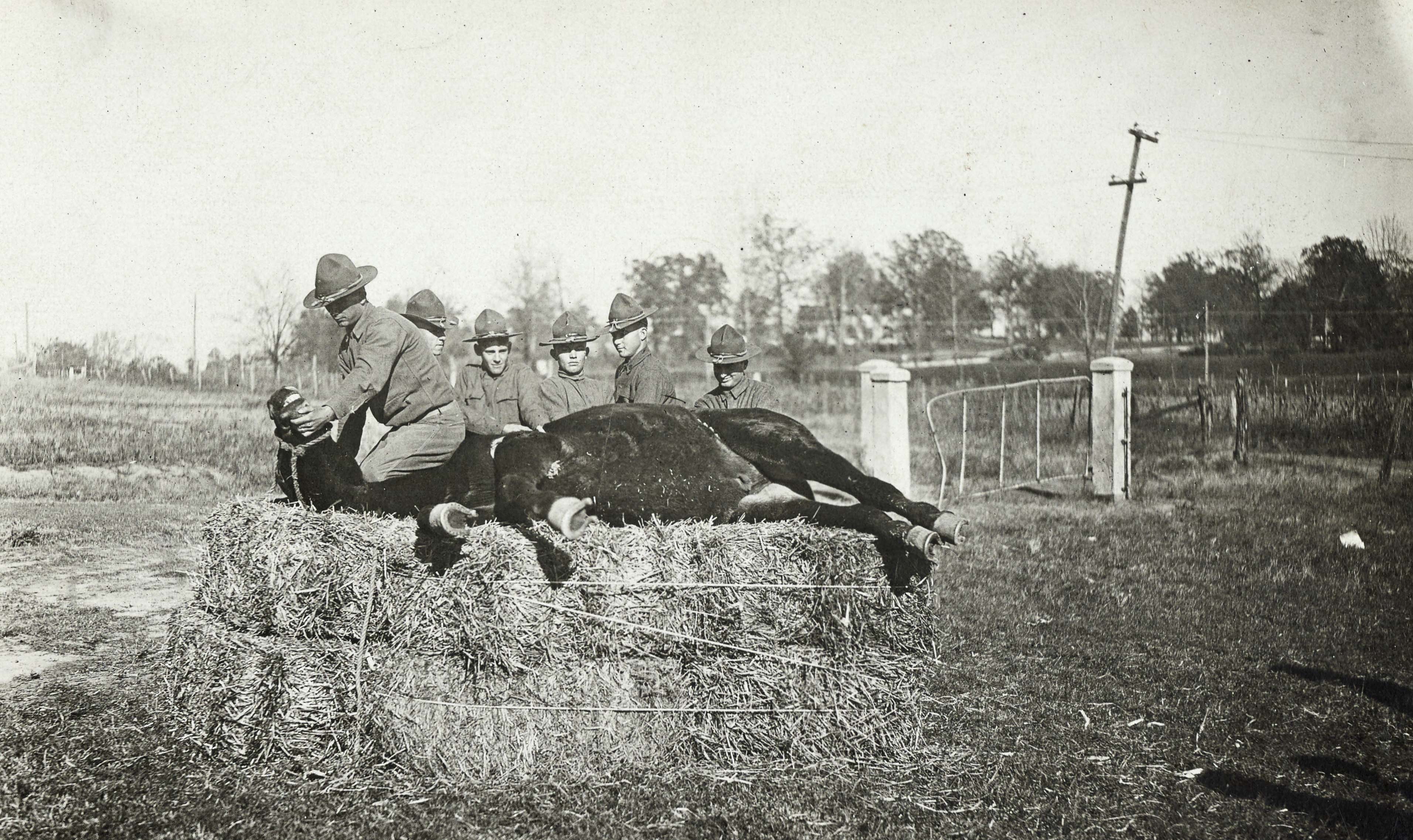 The same mule, now perhaps not quite so cooperative!

The Veterinary Corps, once organized and operating, showed a remarkable ability to meet the needs of the animals and the men they supported. But it was all a case of too little, too late.

From the beginning, the Camp Lee school was called upon to exceed its estimated capacity, and wrestled with how to staff its teaching positions with officers who could teach civilian vets about army life and regulations.

The Veterinary Corps prior to the war consisted of less than 75 officers who had seen service in fighting divisions, and none of these officers had any formal military training – they picked up all that they knew of purely military affairs as a side effect of their service. These officers would have been great instructors, but many had already been sent overseas.

Because Camp Lee was specifically tasked with preparing veterinary units for overseas duty, knowledge of military procedures was one of its primary teaching goals (after all, the veterinarians already knew how to treat sick animals – what they were lacking was any idea of how to get along in the army.)

So, non-vet instructors were brought in to teach the military side of things, with veterinary officers placed as understudies. By the time of the armistice, transition to all-veterinary officer faculty was only a short time away.9 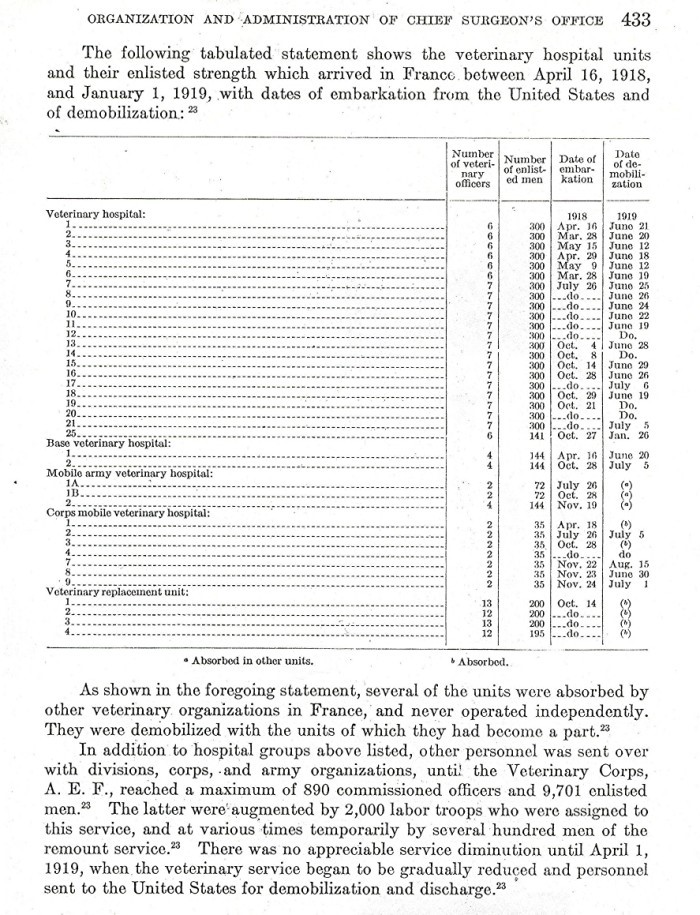 Veterinary hospitals as reported after the war.Orders to form the initial veterinary units to go to France were issued December 31, 1917, but these units did not start departing until April 1918. This was because the new Corps had no Tables of Organization – there were no actual lists of what types personnel each unit should have! The three new training camps had no idea how many men or what skill levels should be assigned or trained for each unit. Instructions had been given that the units should leave completely equipped, but there were no standard supply lists so no real idea of what “fully equipped” really meant, and in any case, supplies were slow to arrive.

Veterinary Company No. 1, mounted, at Camp Greenleaf, Georgia, November 4, 1918. From the collection of Greg Krenzelok.Eventually lists were developed, all supplies except horse ambulances were in place, and the units were authorized to proceed without the ambulances. African-American (“colored”) and white enlisted men were at first mixed in the staffing of veterinary hospitals No. 3, 4 and 5, but, reflecting the standards of the times, the departure of those hospitals was delayed while the white men (a minority) were transferred out and the units could be re-staffed with all colored troops. Finally, they were on their way to France.

A second wave of men began being shipped overseas in mid-July 1918. The recruits for this phase were obtained by a special draft and were practically all ranch men from the western part of the country, ideally qualified for duty with the veterinary units. The delay was unfortunate but undoubtedly resulted in securing men already competent at handling animals.