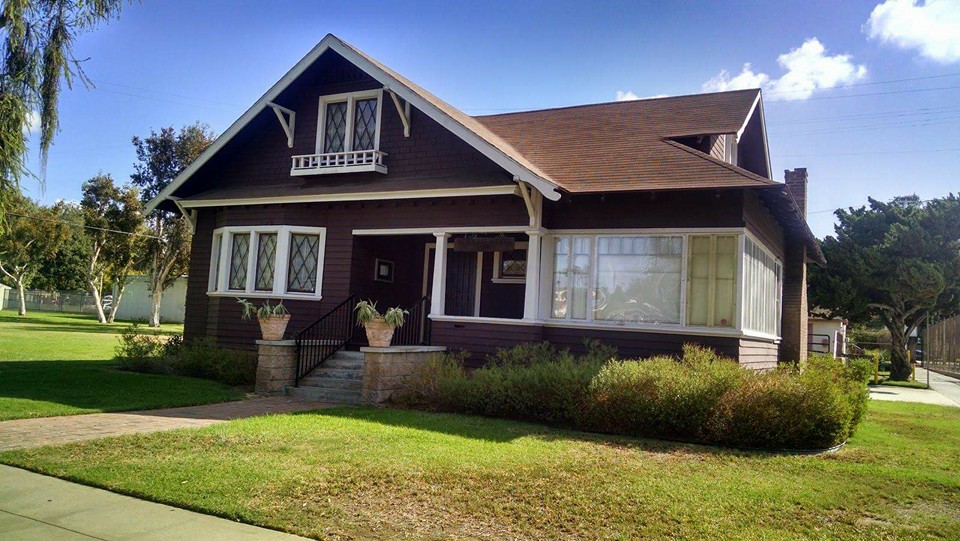 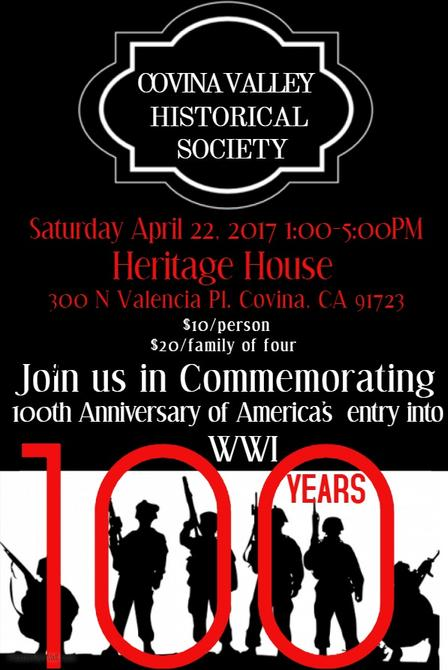 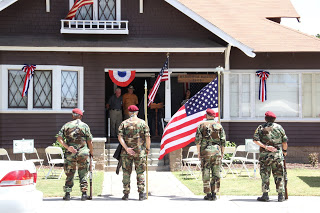 April 22, 2017 Covina Heritage House & Color GuardTo match the "outsized response by the citizens of Covina and environs, representing but a small agricultural community" during World War One, the citizens of Covina and the San Gabriel Valley made an extraordinary effort to commemorate and show support of the California WW1 Centennial Task Force in their Covina Heritage House World War 1 Commemoration and Fundraiser. On Saturday, April 22, 2017, from 1:00 until 5:00 p.m. at the Heritage House, on the west side of Covina Park, the Covina Valley Historical Society presented a comprehensive program exploring the decade of 1910 through 1919 and America’s ultimate participation in World War I. The activities provided visitors both a broad perspective of the war by investigating the battlefields in Europe, and the roll of men and women in the conflict, as well as an examination of the U.S. preparation. The California WW1 Centennial Task Force had also been invited to set up a booth to inform all of the plans and events of the U.S. WW1 Centennial Commission as well as efforts of the Task Force here in California.

The opening ceremony started promptly at 1:00 p.m., and recognized those residents of Covina who sacrificed their lives for their country with colors presented by the Valley Veterans Memorial Team with musical accompaniment provided by Covina’s own Bella Choir. During these ceremonies a proclamation presented by the City of Covina to the California WW1 Centennial Task Force was accepted by Task Force Co-Director Bill Betten. 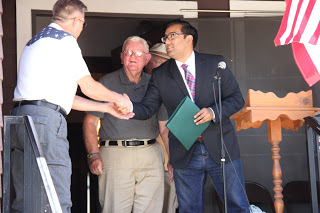 Co-Director Bill Betten shaking hands with Mayor Jorge Marquez who is about to hand Bill a proclamation from the City of Covina on the steps of the Covina Heritage House.

Educator and photographer William Sheldon gave visitors a dynamic presentation entitled, “Flanders Fields, Verdun, and The Belleau Wood—Snapshots of WWI” all collected from his twenty trips to Europe. Historic films were presented including the full-length film, “Men With Wings,” directed by William Wellman, who also directed the famous Academy Award-winning silent film, "Wings."

Exhibits featured displays of military equipment and uniforms, civilian dress, as well as how the Liberty Loan program was promoted nationally and locally supported by Covinans. Oversize front pages of newspapers from the Los Angeles Times and the Covina Argus Citizen aided in illustrating how key events were reported. Additionally, the role of women as ambulance drivers, nurses, and YMCA canteen staffers among other occupations at the front, were discussed and highlighted.

Music, literature, and art were remembered in the display of sheet music, phonograph records, live recordings, as well as period songs sung by the Bella Choir. Paintings, poetry, essays, novels, and histories were examples of the era's creativity.

To engage folks tactilely, guest of all ages had an opportunity to create hands-on crafts that reflected their own interpretation of wartime events.