As the centennial presses onward, renovation of the WW1 Monument at Los Angeles’ Victory Memorial Grove progresses. The project director, Courtland Jindra, here recaps and reports on the next phase of restoration, that of re-landscaping, and repairing the flagpole. 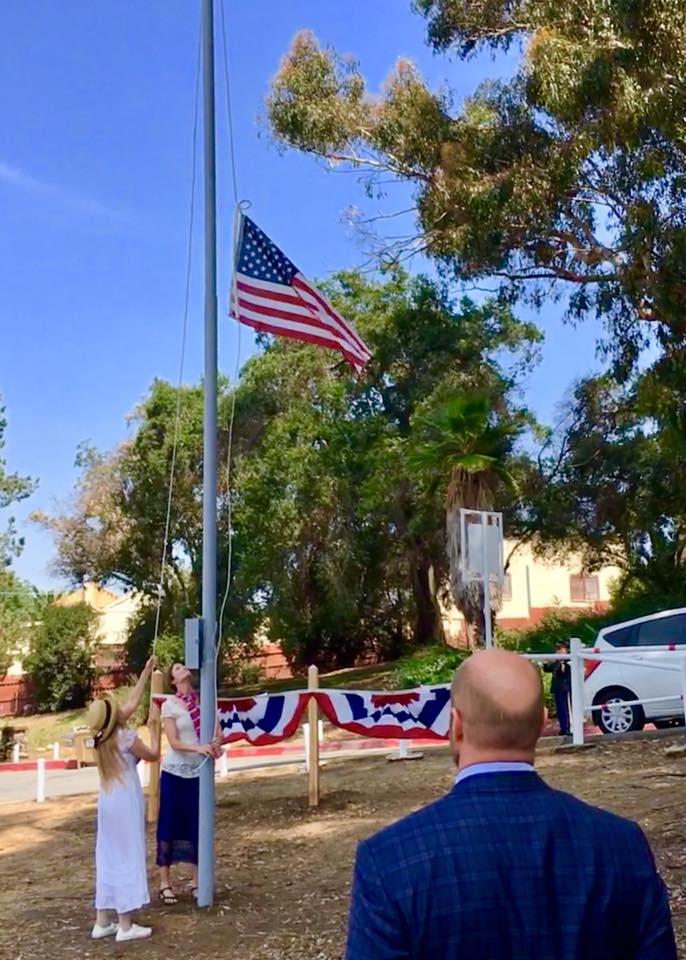 Last year I wrote two articles for the Roads to the Great War Blog on efforts to bring back Victory Memorial Grove in Los Angeles. (See http://roadstothegreatwar-ww1.blogspot.com/2017/06/the-centennial-at-grass-roots-restoring.html and http://roadstothegreatwar-ww1.blogspot.com/2017/06/the-centennial-at-grass-roots-restoring_26.html) 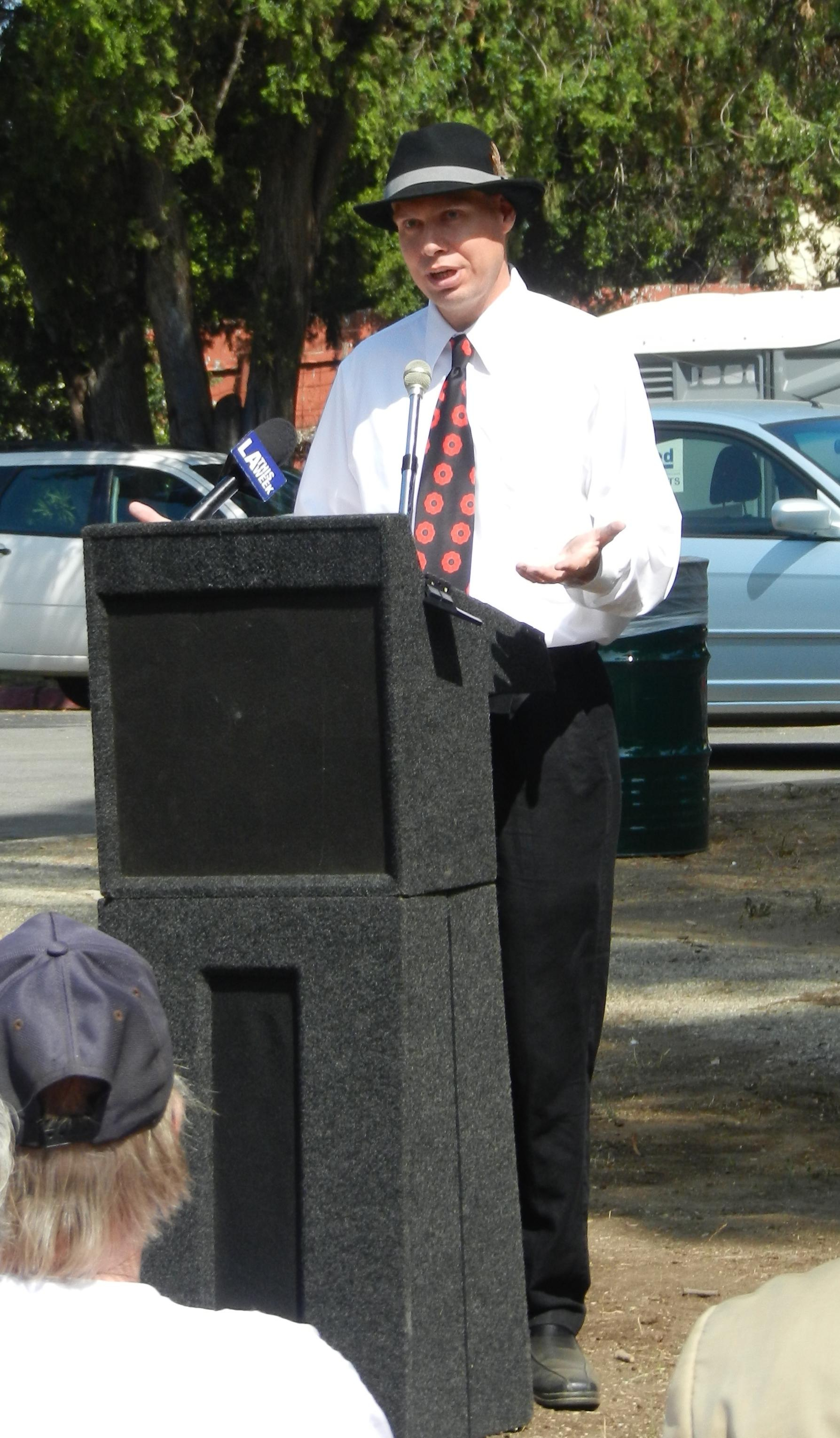 Courtland Jindra welcomes distinguished guests and dignitaries.Shortly thereafter our project was chosen among the first 50 awardees of the National WWI Centennial Commission's 100 Cities/100 Memorials grant program. This allowed some of the money that had been spent by Los Angeles-Eschscholtzia Chapter of DAR (LAE-DAR) to go back in their coffers. I am currently advocating they set up a permanent maintenance fund so work can be done on the monument every few years to keep it in tip top shape. Meanwhile discussions revolved around what to work on next. 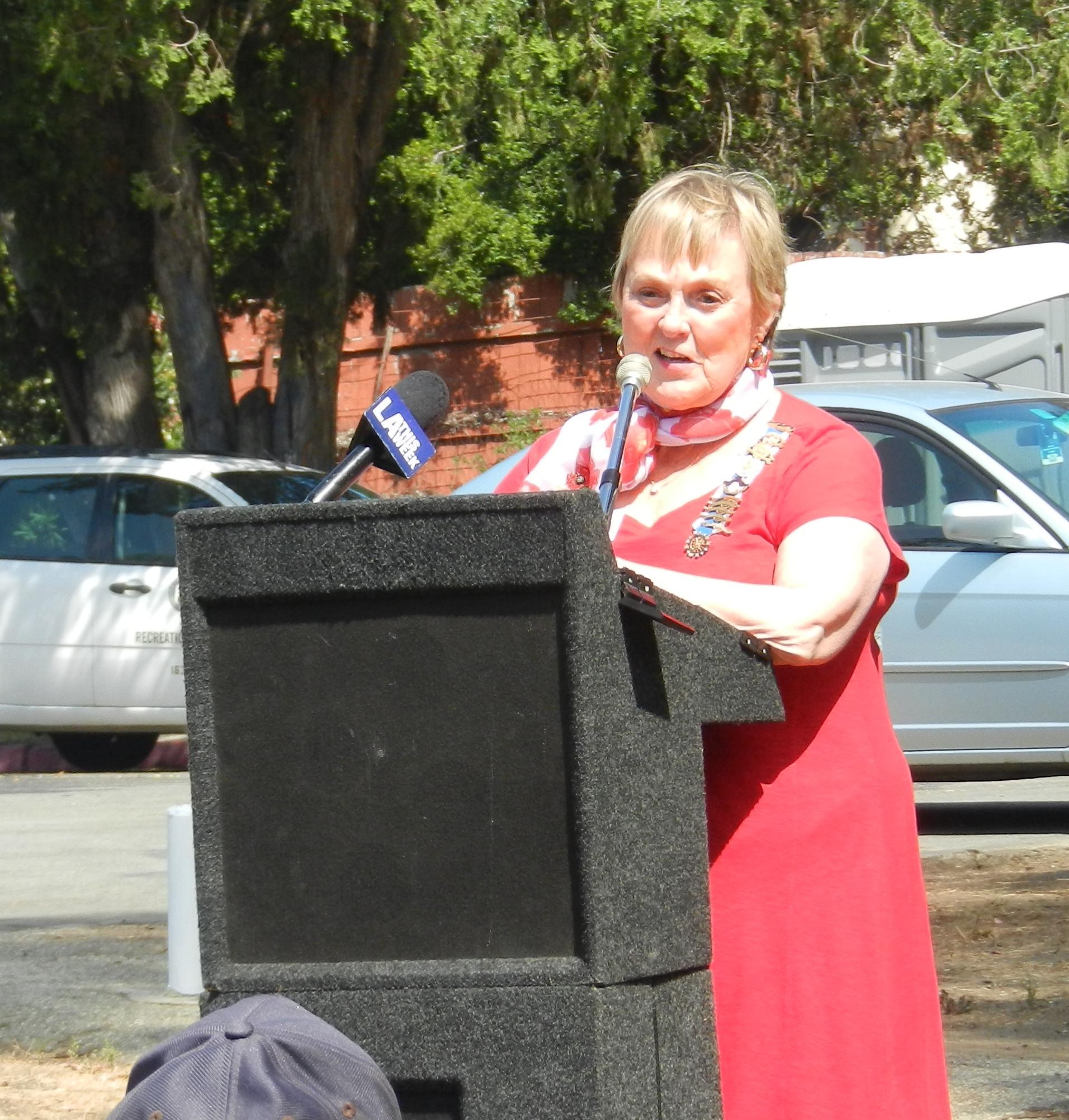 Unfortunately June is after prime planting season has ended in southern California. Unsurprisingly as the months wore on most of these first plants died. Though this was anticipated, we were somewhat disappointed. Shortly talk revolved around having another planting event in the late fall or winter. Because of the various schedules of participants, and the holidays, January 20th was finally agreed to. As they had the previous Spring, Hollywood Post 43 of the American Legion helped co-ordinate with the Mission Continues and Disney Salute to have a nice group of volunteers on site. City Councilman Mitch O'Farrell attended and even was out there rolling up his sleeves, digging holes with everyone else. Also present were a couple of representatives from the Citizens Committee to Save Elysian Park, which is a local organization concerned with the

Philip Murphy of the Citizens Committee to Save Elysian Park welfare and preservation of the whole of Elysian Park. My first run with them

Guests Standing to recognize the flag. had been in the months leading up to the re-dedication and they seemed dubious at best about the project, but after attending the 2017 ceremony more individuals within the organization began to believe. This round of plantings has had a much better success rate with over half surviving to date. 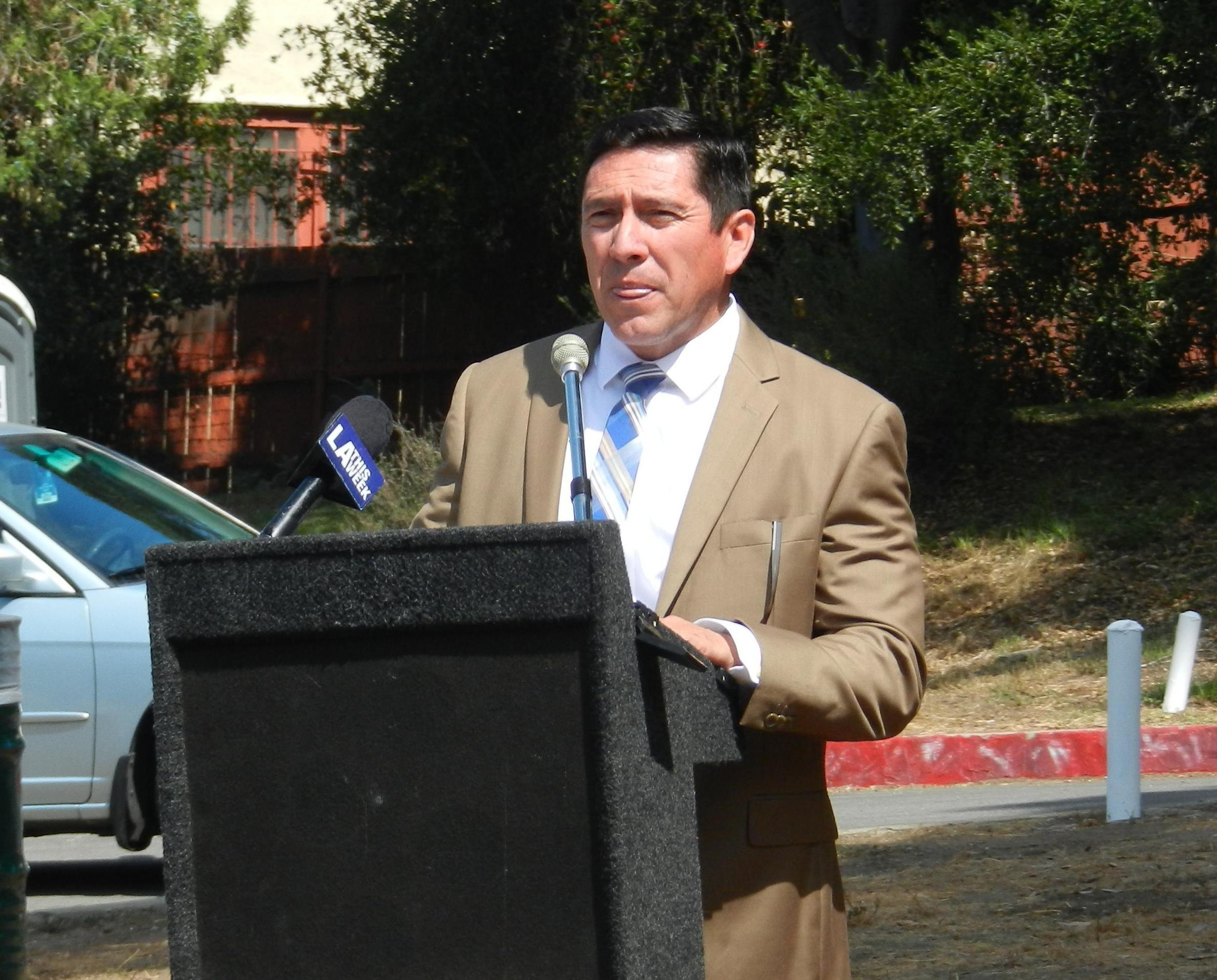 Les Probst of American Legion Post 43 addressed the crowd on Flag Day.As 2018 continued my Mom, Lester Probst, and I representing LAE-DAR, Post 43, and the

Los Angeles City Councilman Mitch O'Farrell California Centennial Task Force respectively had meetings with District 13 (O'Farrell's) and the LA Department of Recreation & Parks (RAP) about the restoration of the flagpole at the base of the park. It was unclear how long it had been since a flag had flown over VMG, but according to one long time employee of RAP none had in his 28 years on staff. It was decided to keep June 14th sacred given the monument dedication date, and since this project was about the restoration of the flag pole – Flag Day seemed even more fitting. It was also decided to install a lighting system with solar panels so the flag could stay up 24/7.

So as June 14th dawned, once more a ceremony was held at VMG, this time on the bottom level entry into the park where the flag pole sits. I emceed a program that had speakers including Councilman O'Farrell and individuals from CCSEP, RAP, Post 43, and LAE-DAR. The Honorable Henri Vantieghem, Consul General of Belgium, 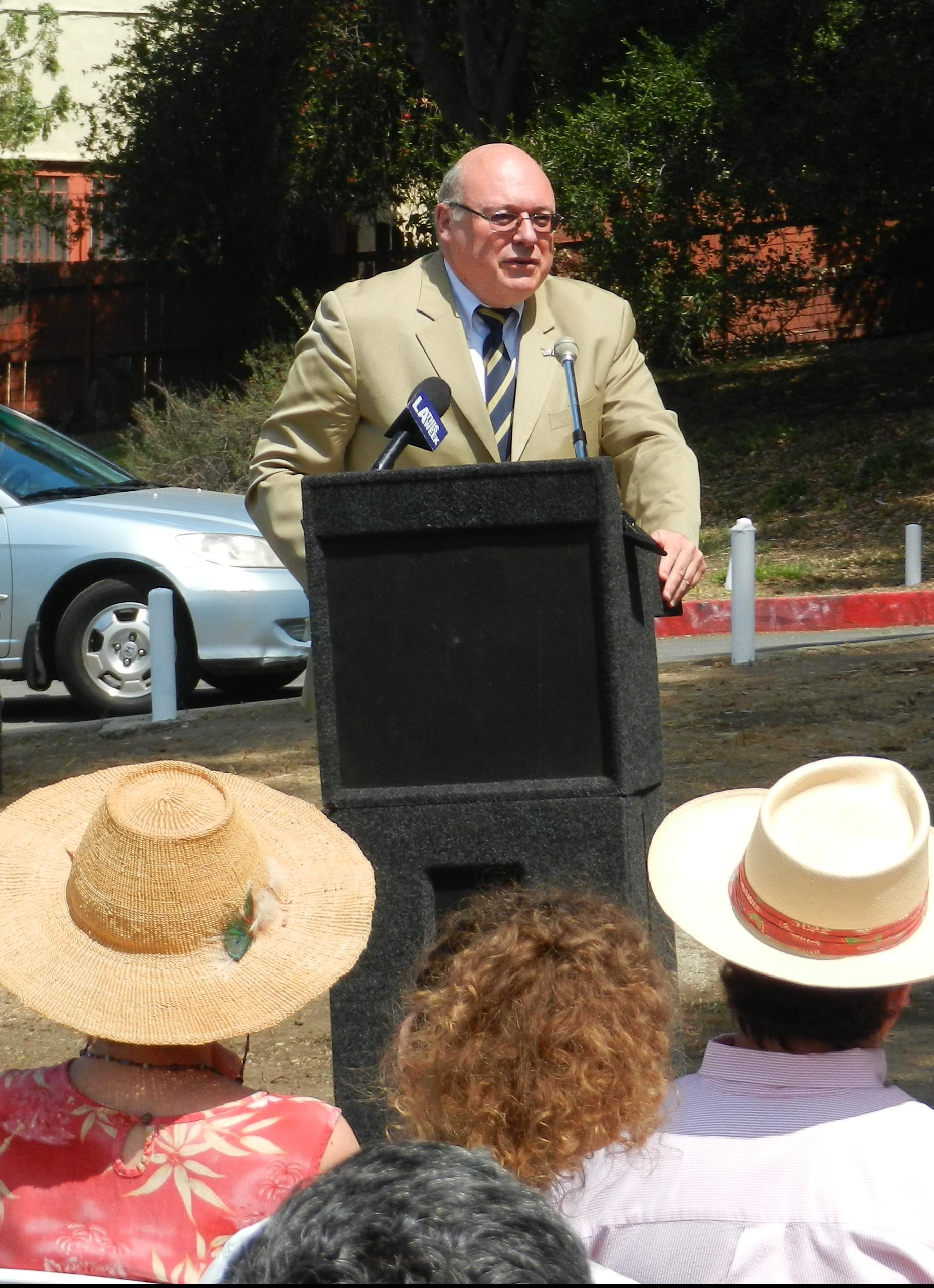 Consul General Vantieghem of Belgium at the podiumalso attended and provided remarks. I had written a summary of the history of Flag Day and World War One which was narrated by a member of Veterans in Film and Television while a member of Squadron 283 of Sons of the American Legion read 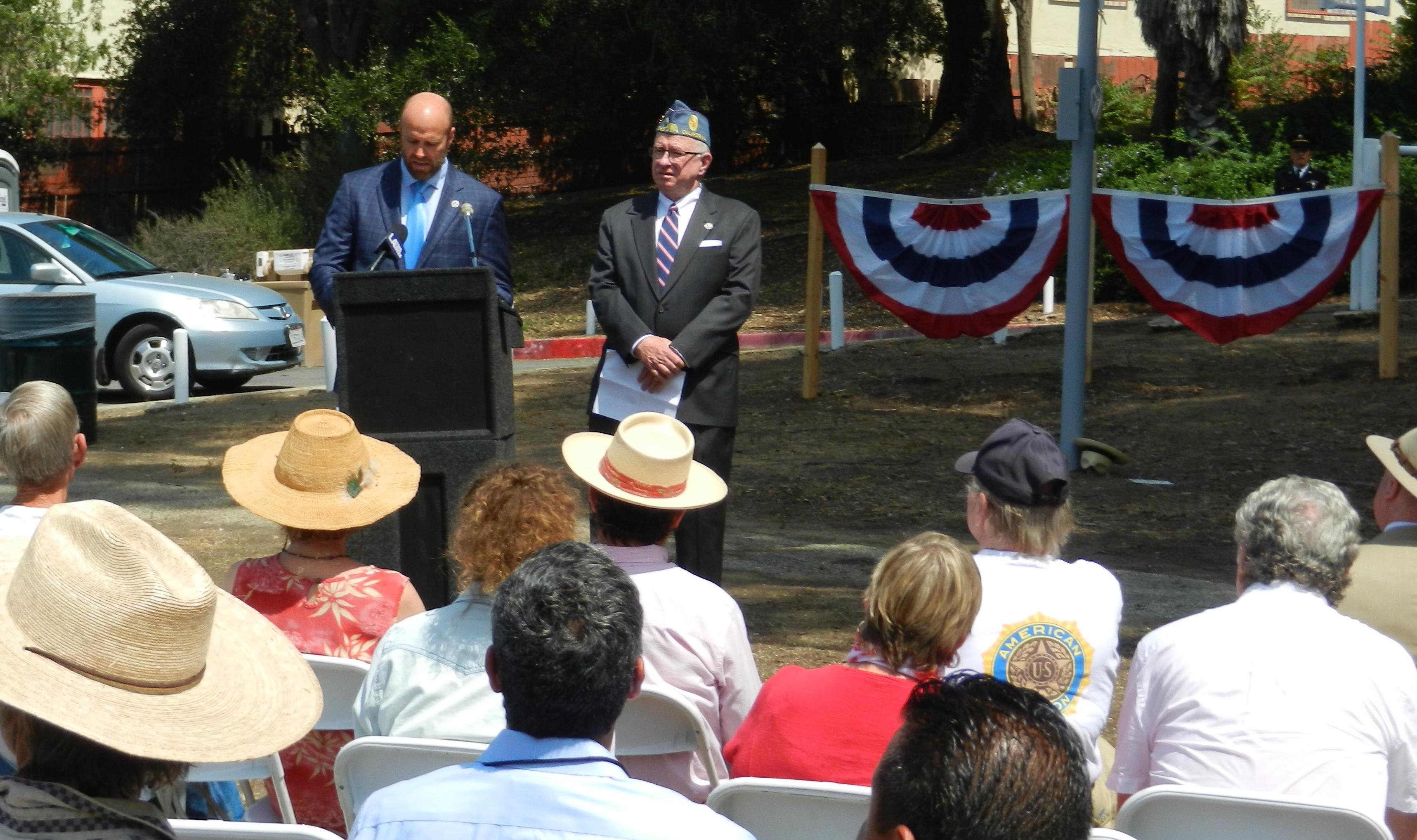 Jack Kennedy of Veterans of Film and Television excerpts from President Wilson. At the conclusion a flag was raised that had previously flown over the National World War One Museum and Memorial in Kansas City while a bugler played To the Colors.

As the crowd milled around afterward discussions continued on what is next for this park-within-a-park that might someday soon become the memorial jewel is should always have been. 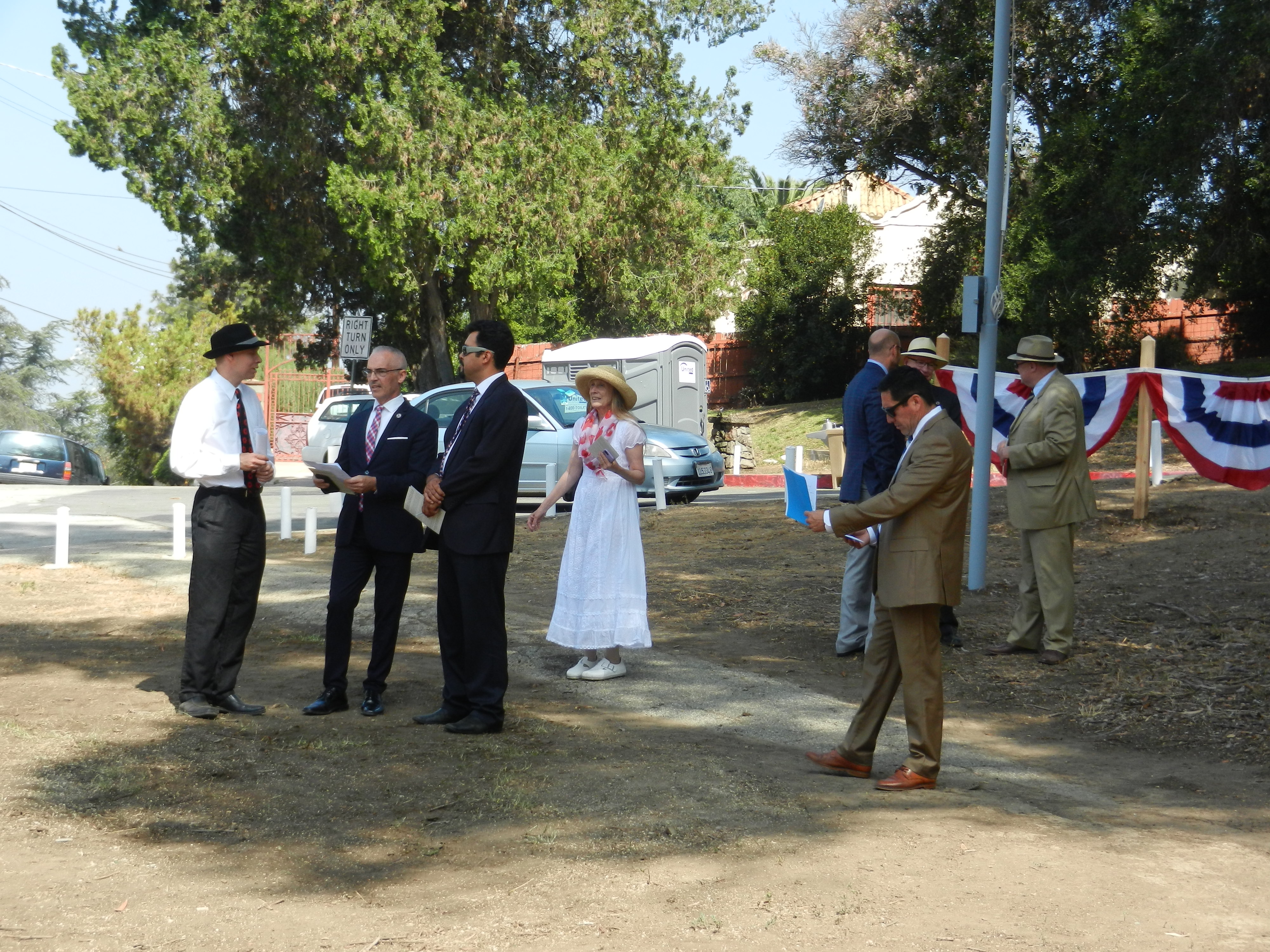 Participants gather before the ceremony. 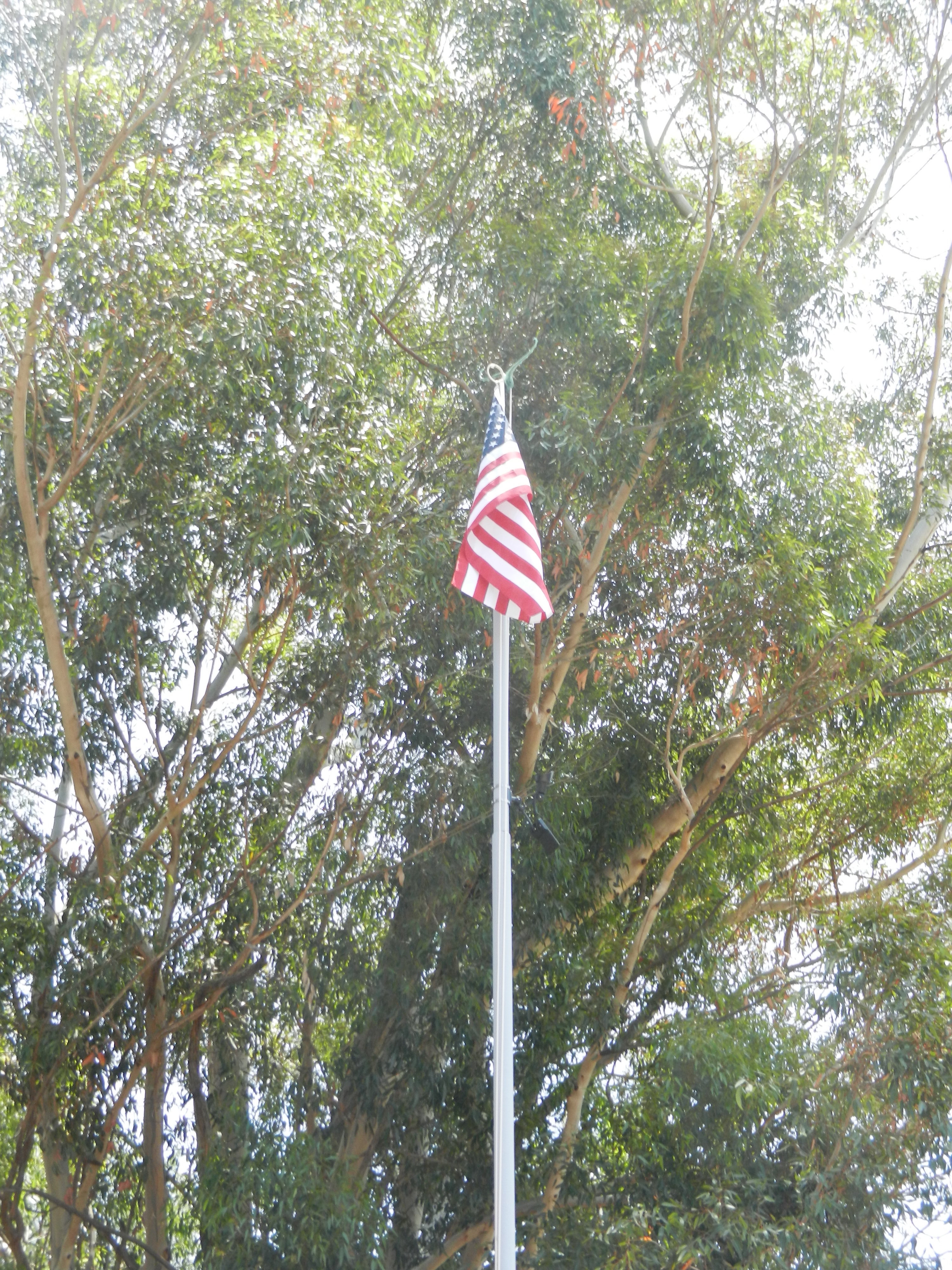 Our flag flies high once more near the WW1 monument. 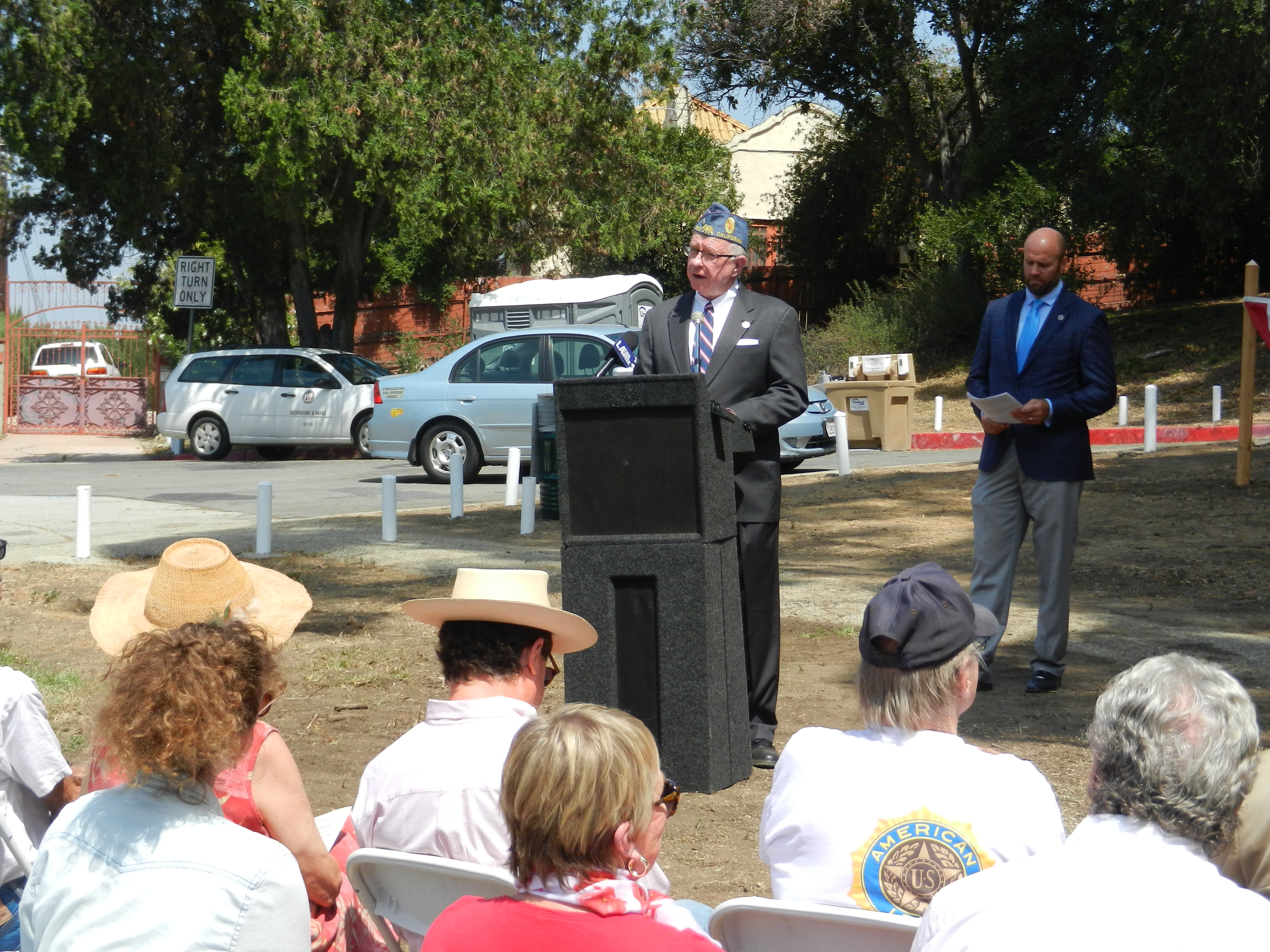 Tom Yaeger of the Sons of the American Legion Post 283 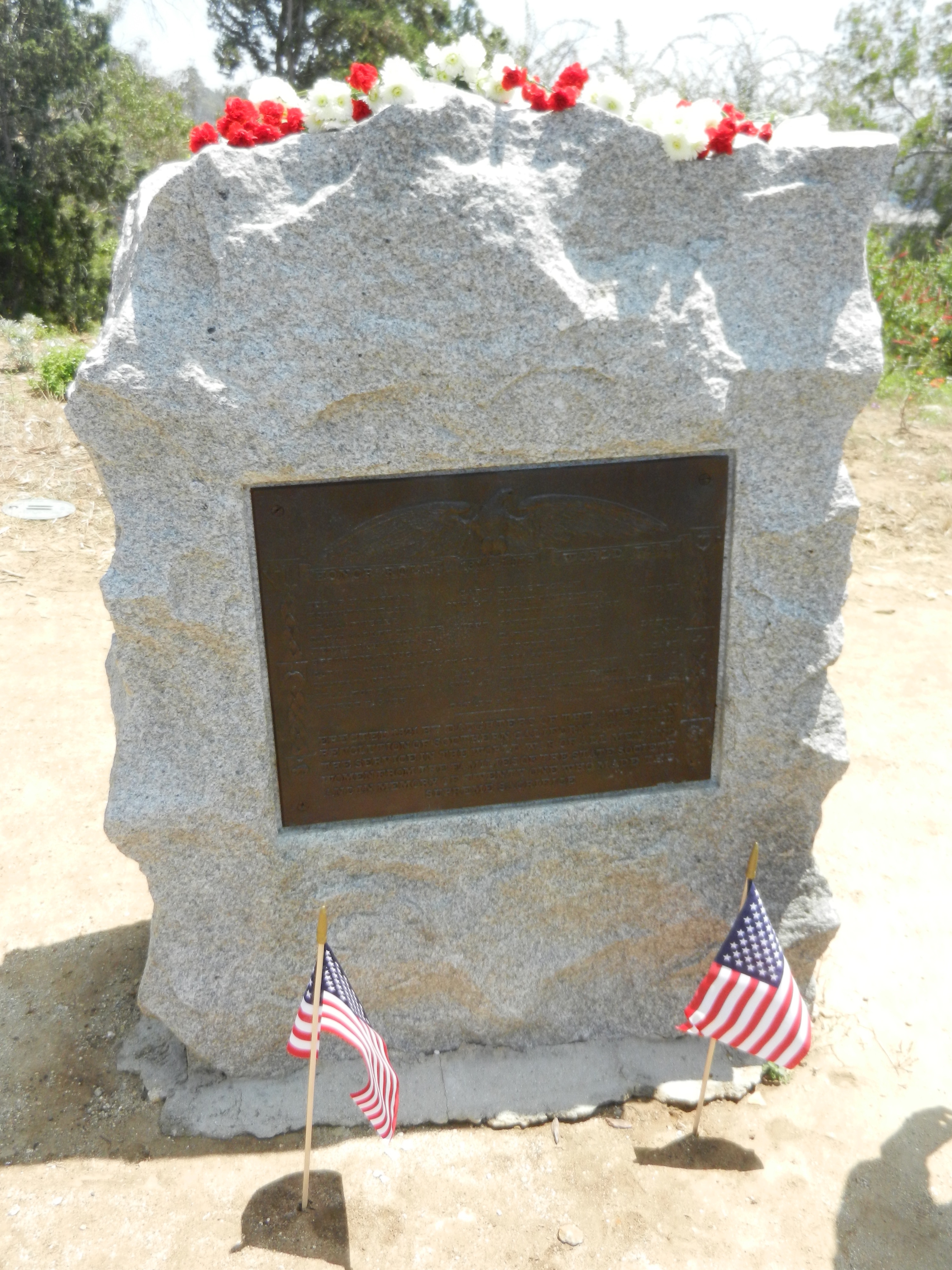 The renovated DAR monument sits near the newly repaired flagpole. 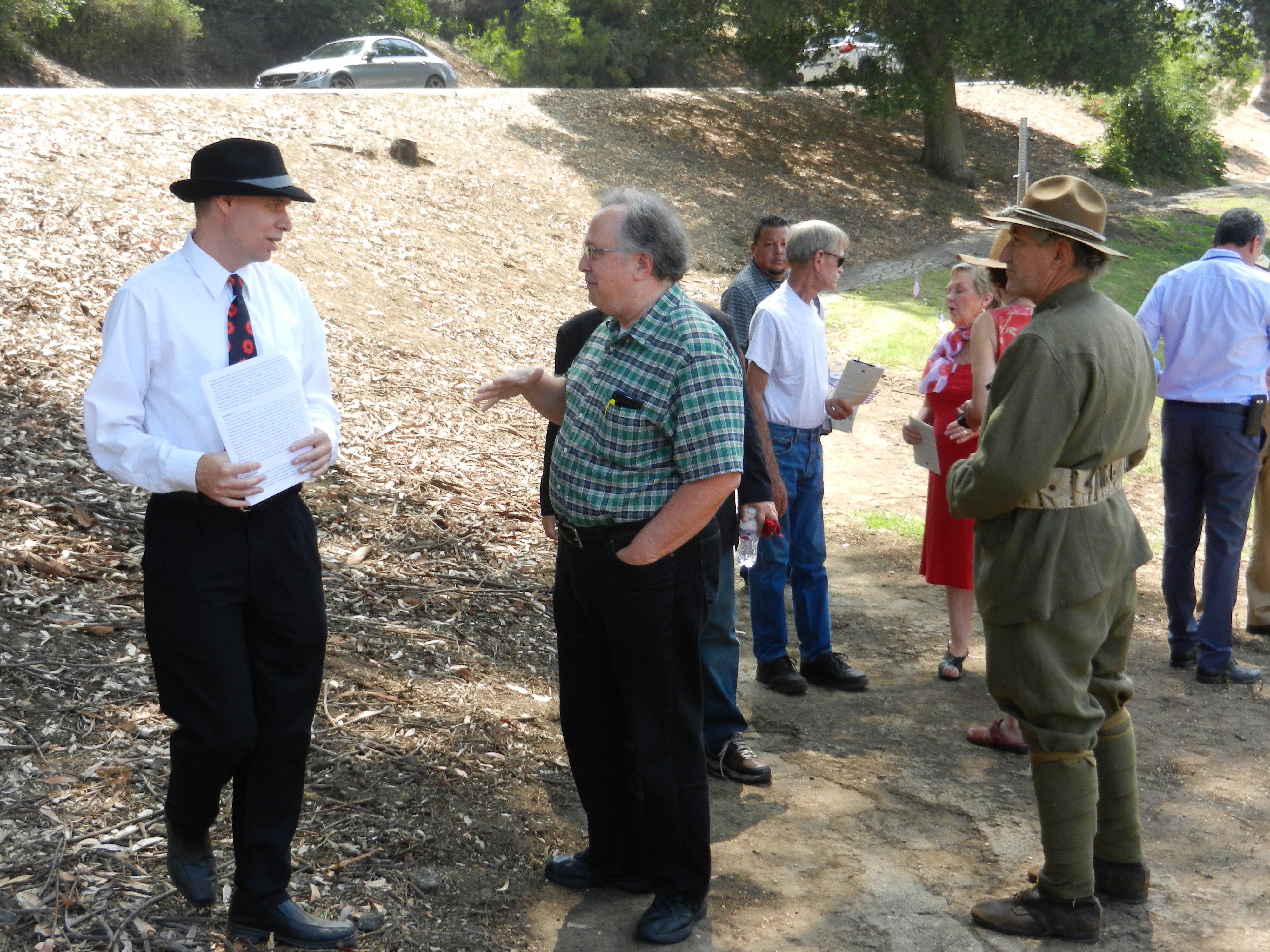 Participants and attendees milling after the ceremony.