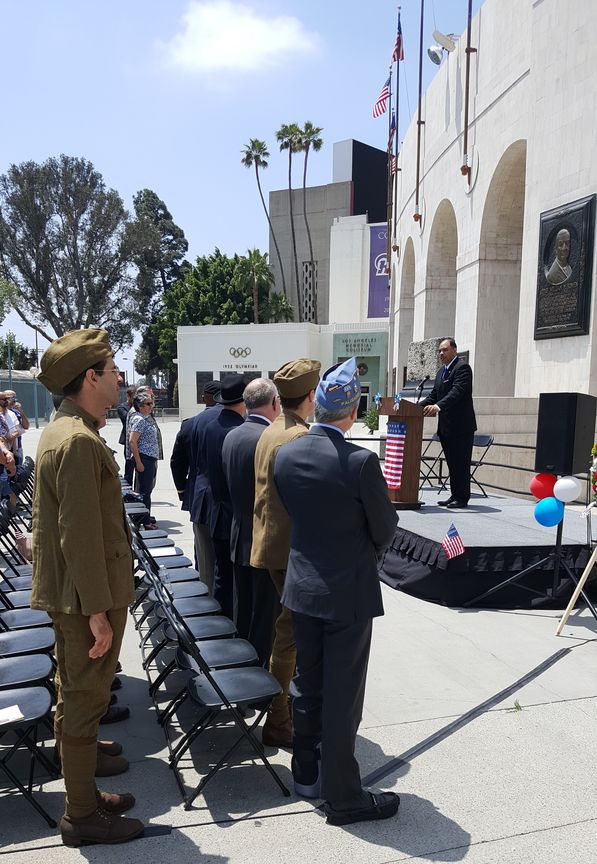 Al Naipo Interm CAO of the LA Memorial Coliseum welcomes the audience to the Memorial Day commemoration.One hundred years ago there was not a commemoration known as Memorial Day on May 28th. Officially, Memorial Day had fallen every year on May 30th from its origin in 1868 until 1970. In 1968, Congress had passed the Uniform Monday Holiday Act, establishing Memorial Day as the last Monday in May and this went into effect in 1971. The same law also declared Memorial Day as a federal holiday. Thus, our event focusing upon the Great War, held at the largest World War One memorial in California, fell upon a very warm and clear day providing an excellent situation for a commemoration. 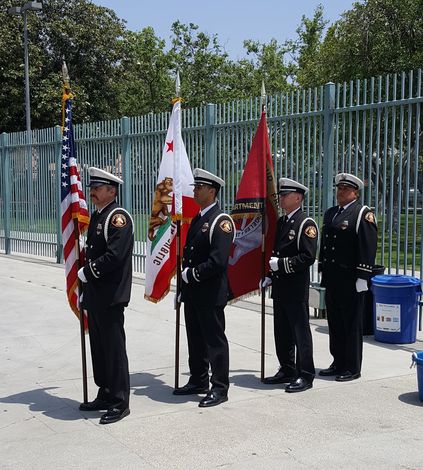 This year's Los Angeles Memorial Coliseum World War 1 Memorial Day ceremony took advantage of the Coliseum's long history of being Los Angeles's premier monument dedicated to remembering those who served and sacrificed so much one hundred years ago. In fact, the commemoration coordinator and producer, California WW1 Centennial Task Force Co-Director Courtland Jindra, could not have been more pleased. 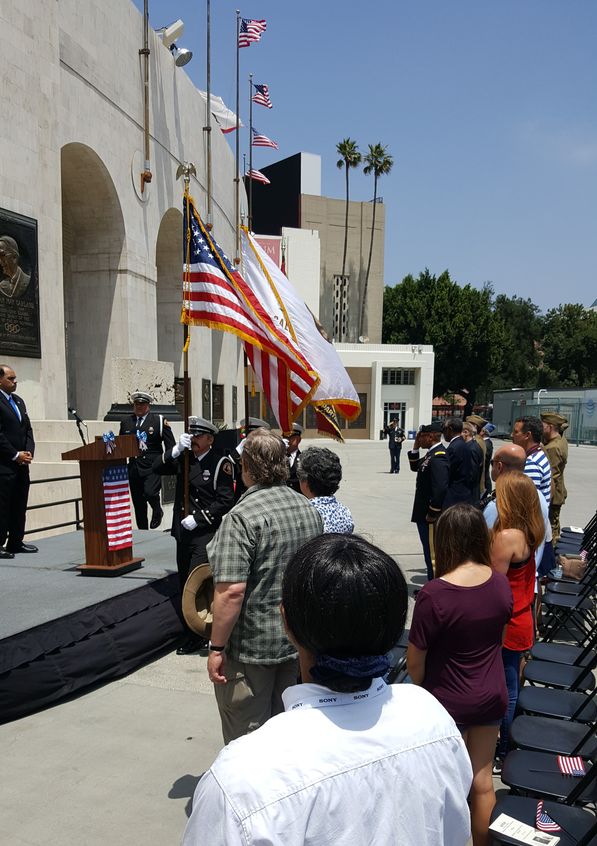 Set upon the entrance of the Memorial Coliseum before the historic Coliseum peristyle, the Memorial Day commemoration stage sat below the heroic propylaeum, or triumphal arch. This houses the two Memorial Court of Honor plaques dedicated to the veterans of World War I. The first plaque honoring Los Angeles County WW1 veterans was set in place when the Coliseum was commissioned in 1921 as a memorial to Los Angeles veterans of the Great War. In 1968, it was rededicated to all veterans of the Great War. 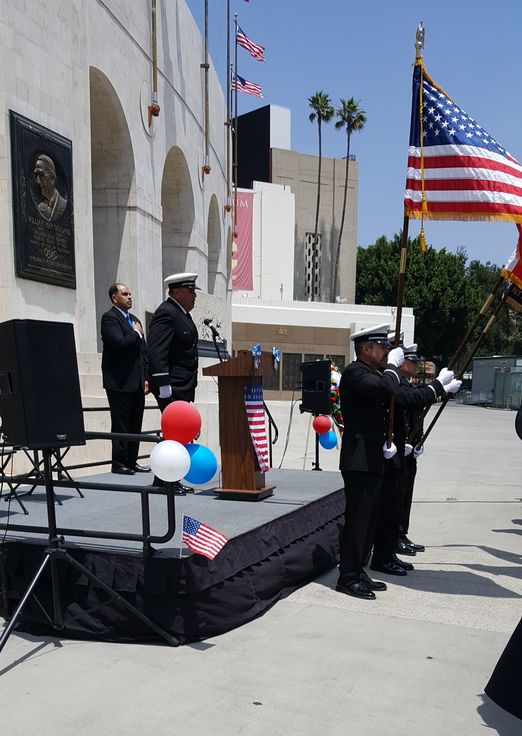 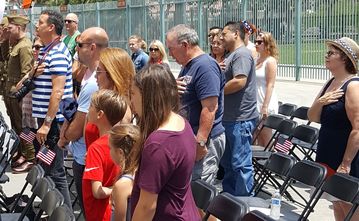 The honor guard advanced in snappy fashion, and then the audience was awarded the opportunity to hear a gallant rendition of the National Anthem by Humberto Aguirca, fire fighter/paramedic, Los Angeles County. The song was brilliantly sung as all proudly stood and gave their salute. The Los Angeles County Fire Department Honor Guard is a non-profit organization that proudly serves the community and honors the fallen within their department and 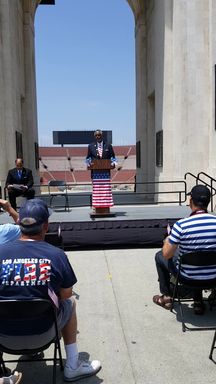 Below the main arch Councilmember Curren Price Jr. addresses those gathered on Memorial Day. other agencies. 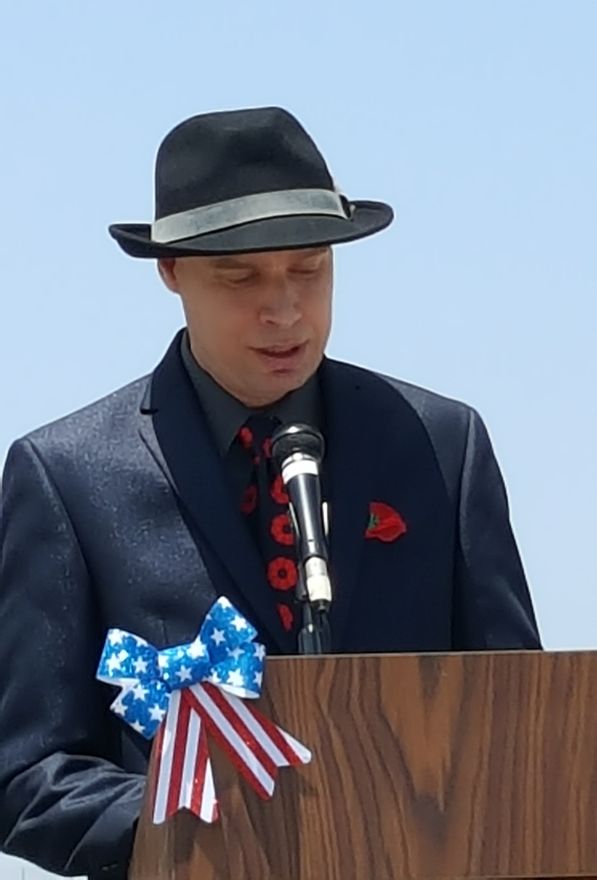 Co-Director Courtland Jindra acts as historical narrator. Angeles City Councilmember for the Ninth District and also serves as the President of the Los Angeles Memorial Coliseum Commission. His service to his community also includes having been a California State Senator and member of the California State Assembly.

The historical narration section of the program was then introduced by WW1 Centennial Task Force Co-Director Courtland Jindra who had prepared the day's program. He first introduced Mr. Tom Yaeger who presented two readings. The first were excerpts from General Logan's original Memorial Day Order of 1868, which helped to give birth to our current celebration of Memorial Day. 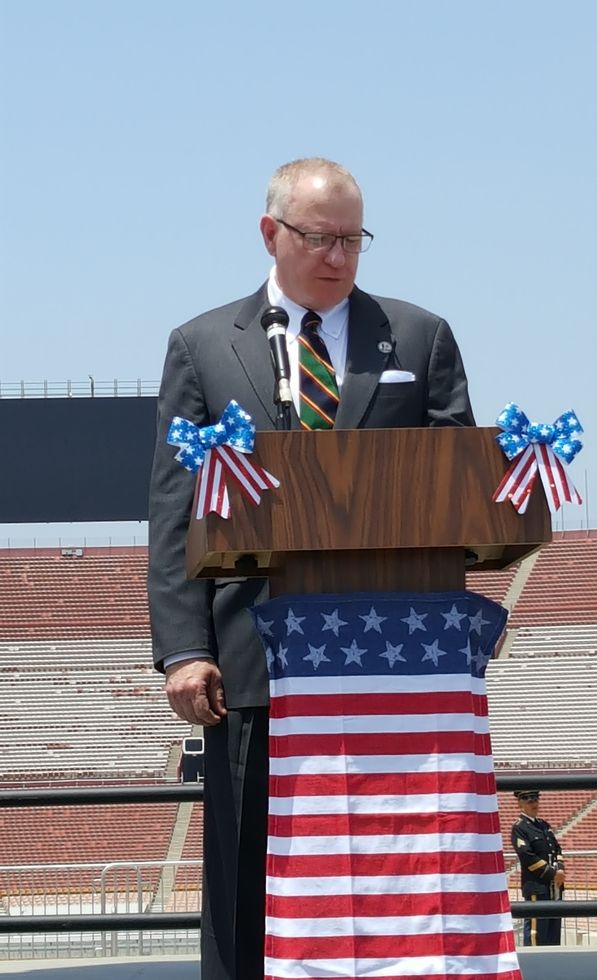 Tom Yaeger does an oral interpretation.

Mr. Yeager, a member of the Sons of the American Legion, Squadron 283 then read from the original article from the Los Angeles Times, of May 26, 1920, entitled "Stadium as War Memorial" which gave a fine background on why it should not be forgotten that the Coliseum is a WW1 memorial. 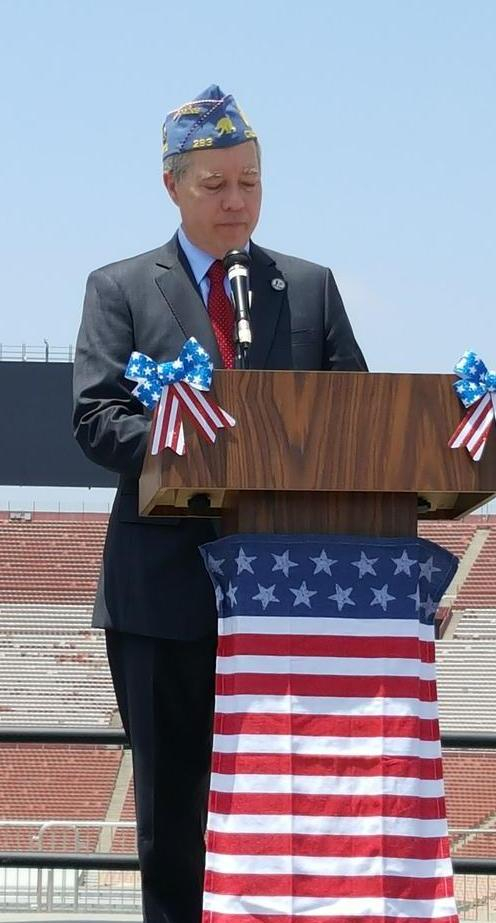 Jim Yocum of the Sons of the American Legion Squadron 283.

As soon as Tom Yaeger left the stage a fellow Squadron 283 member took his place to continue the program. Jim Yockum, also an officer with the Sons of the American Legion had been asked to present President Woodrow Wilson's Congressional Address of April 2, 1917, in which Wilson spoke directly to Congress explaining why it was necessary that they join the Allies and declare war on the Central Powers, though he had promised to "Keep America out of the war."

The historical narrative continued then with a bit more flare when a U.S. Doughboy in authentic U.S. Army attire stepped onstage. Daniel Bermudez, a member of the Great War Historical Society, was like watching a real American WW1 Soldier walk out before the audience. He struck the crowd hard with a reading, again from the Los Angeles Times article entitled " Southern California's Roll of Honor" from November 17, 1918. 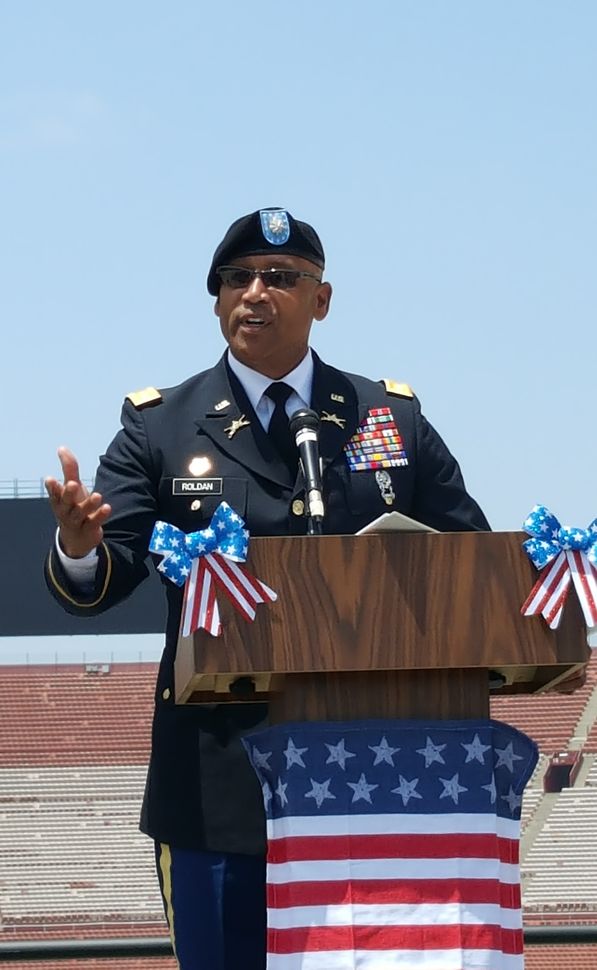 As the Doughboy stepped down the day's keynote speaker was then introduced. U.S. Army Lieutenant Colonel Gilbert Roldan is the Director of the J-5 Strategic Plans of Joint Forces Headquarters approached the dais in full U.S.Army uniform. A dedicated thirty plus year service member of the United States Army, Lt. Col. Roldan is also a Sergeant with the Los Angeles County District Attorney’s Office Bureau of Investigation.

In his address, Lt. Col. Roldan stressed the importance of not only supporting

Preparing to place the wreath. the efforts of today's American service men and women, he reminded all that every American owes their liberty and freedom to those who fought, bled, and died on the battlefields of WW1 one hundred years ago.

With typical Memorial Day respect and honor, a squad of Doughboys were asked to lay a wreath at the foot of the monument. As they completed their presentation with respectful military hand salutes a bugler played taps off in the distance. 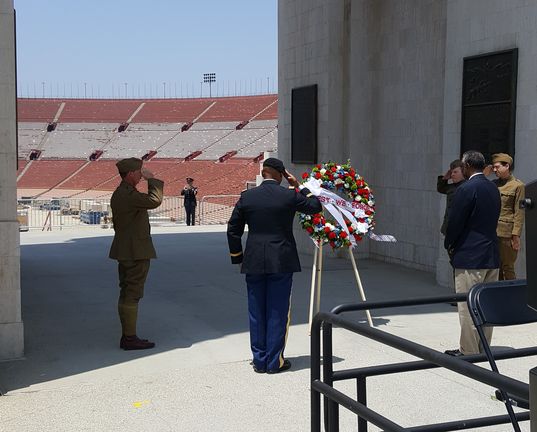 Trumpeter Rudy Gutierrez has played taps for countless events, including Memorial Days. He is dedicated to honoring the fallen at various commemorative events throughout southern California, often generously volunteering his time. He musical expertise shone, and he and his horn added that special emotional moment that caused all to feel the warm flush of patriotic reverence. 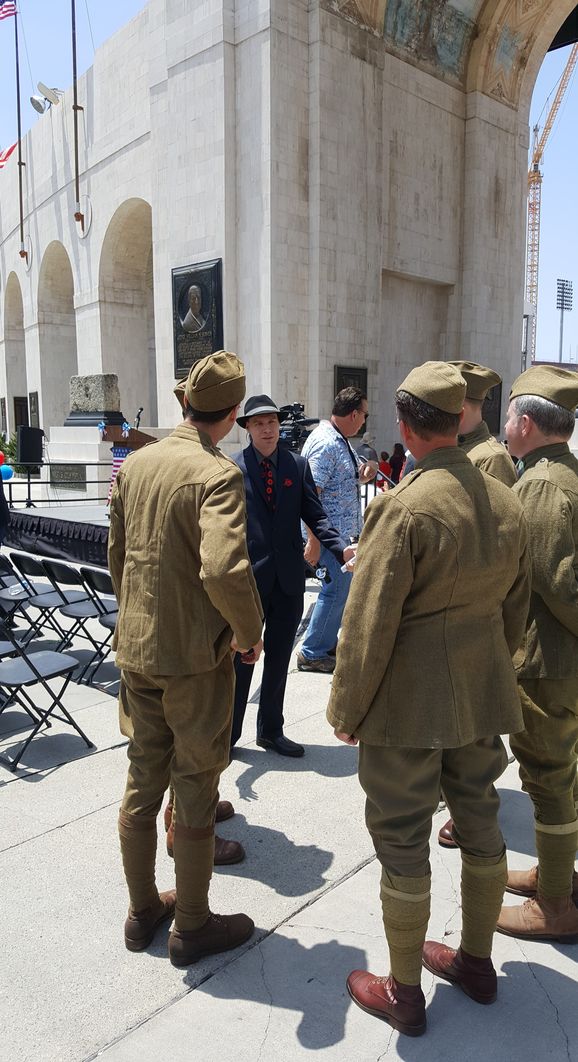 In concluding remarks Courtland Jindra thanked everyone for attending and encouraged all to visit the California WW1 Centtennial Task Force booth where I and my wife Joni Betten had set up an ample display of World War One artifacts and centennial information was available. Many folks stopped by to ask questions and learn more about those courageous Americans nicknamed "Doughboy" who served during World War One and gave all for the cause of liberty for their country. 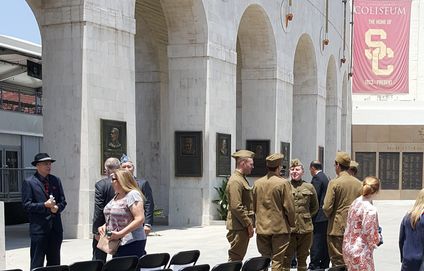 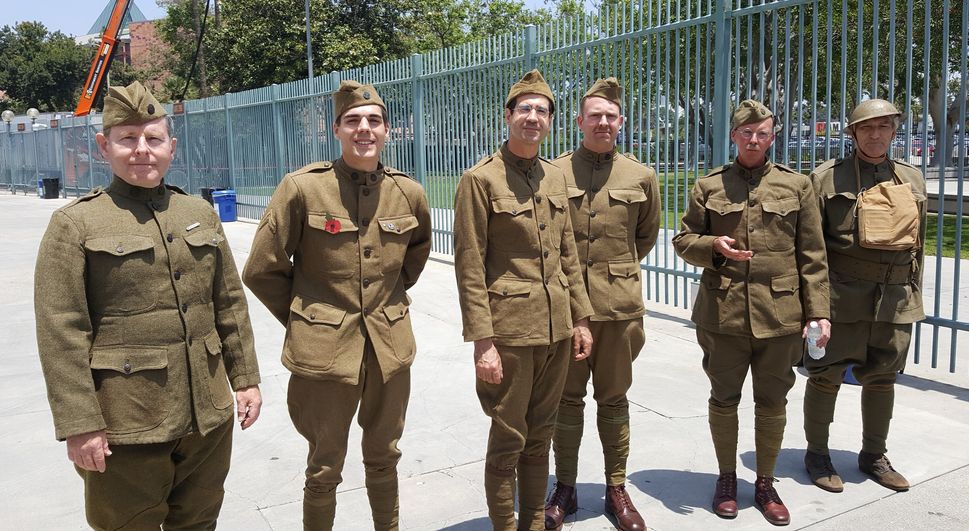 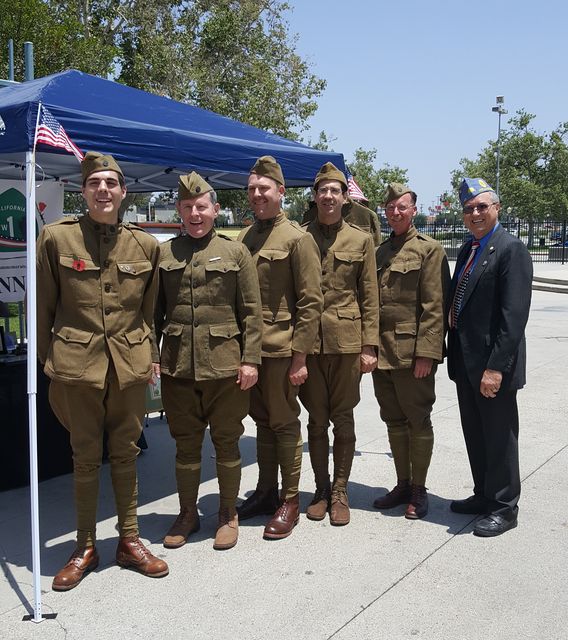