November 8-9, 2018 - Imperial Implosions: World War I and its Global Implications 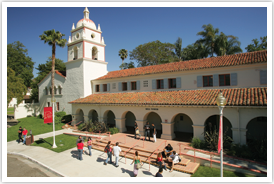 Just days prior to the centennial of the ending of World War One, historians and educators gathered on the sun-drenched coast of California for a two day conference to investigate and explore world-wide consequences concerning The Great War. Not unlike the plans made by belligerents one hundred and four years earlier at the beginning of WW1, the conference plans were also to be found unachievable due to unanticipated wildfires in the area that soon raged out of control.

California State University at Channel Islands, Camarillo, California, and the History Department had announce that it would host a conference commemorating the 100th anniversary of the end of World War I on November 8th and 9th, 2018. The focus of the conference became it's title, Imperial Implosions: The Global Implications of World War I.

Featured speakers at the conference were to be

Professor Sean McMeekin of Bard College and the author of The Russian Revolution (2017) and The Ottoman Endgame:  War, Revolution and the Making of the Modern Middle East (2015)  and

Professor Pria Satia, of Stanford University and the author of Empire of Guns:  The Violent Making of the Industrial Revolution (2018) and The Great War and the Cultural Foundations of Britain's Covert Empire in the Middle East (2008.) 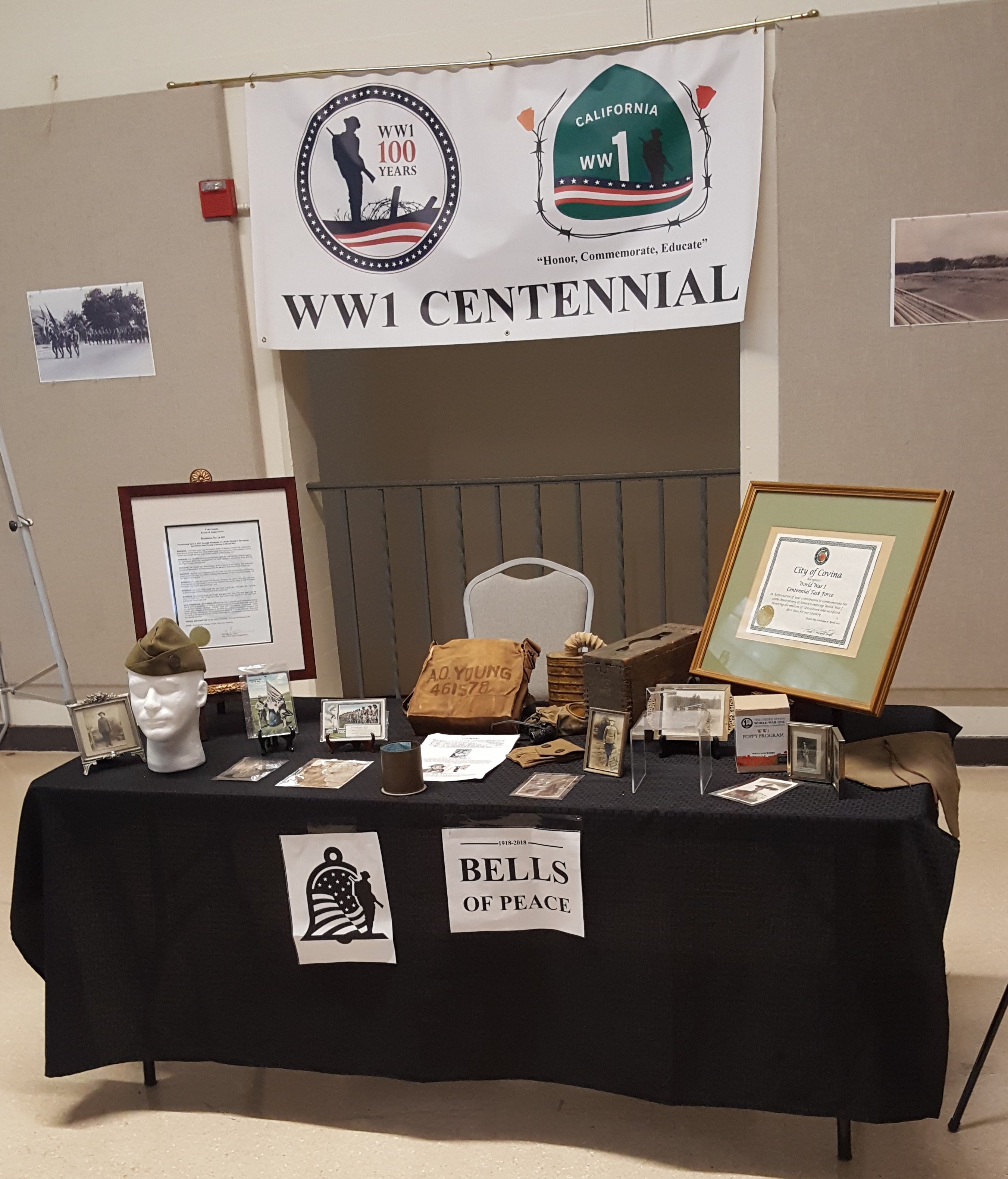 California WW1Centennial Task Force display with sign at CSUCI conferencePresentations were to extend over both days and include other informative talks and educational displays. Speakers and contributions dealing with many aspects of the war, throughout the world, were planned to deal with the significant historical implications and reverberations of World War I. CSUCI Professors P. Scott Corbett, and Michael Powelson had worked hard to prepare, and the morning of the first day of the event promised a fine day ahead with clear blue skies accompanied by warm breezes.

Additionally, two of the Co-Directors of the California WW1Centennial Task Force had been asked to present papers. I being one, had arrived early in the day as I had been asked by Dr. Corbett was to present a paper and address those in attendance. My topic, "James Reese Europe: The Carrier of the Most Virulent Germ of the First World War, and All That Jazz," had been selected from a variety of paper submitted. Likewise, my fellow Co-Director Courtland Jindra was to talk on his submission, "Memorializing the War," of which he is an expert in the Los Angeles area. 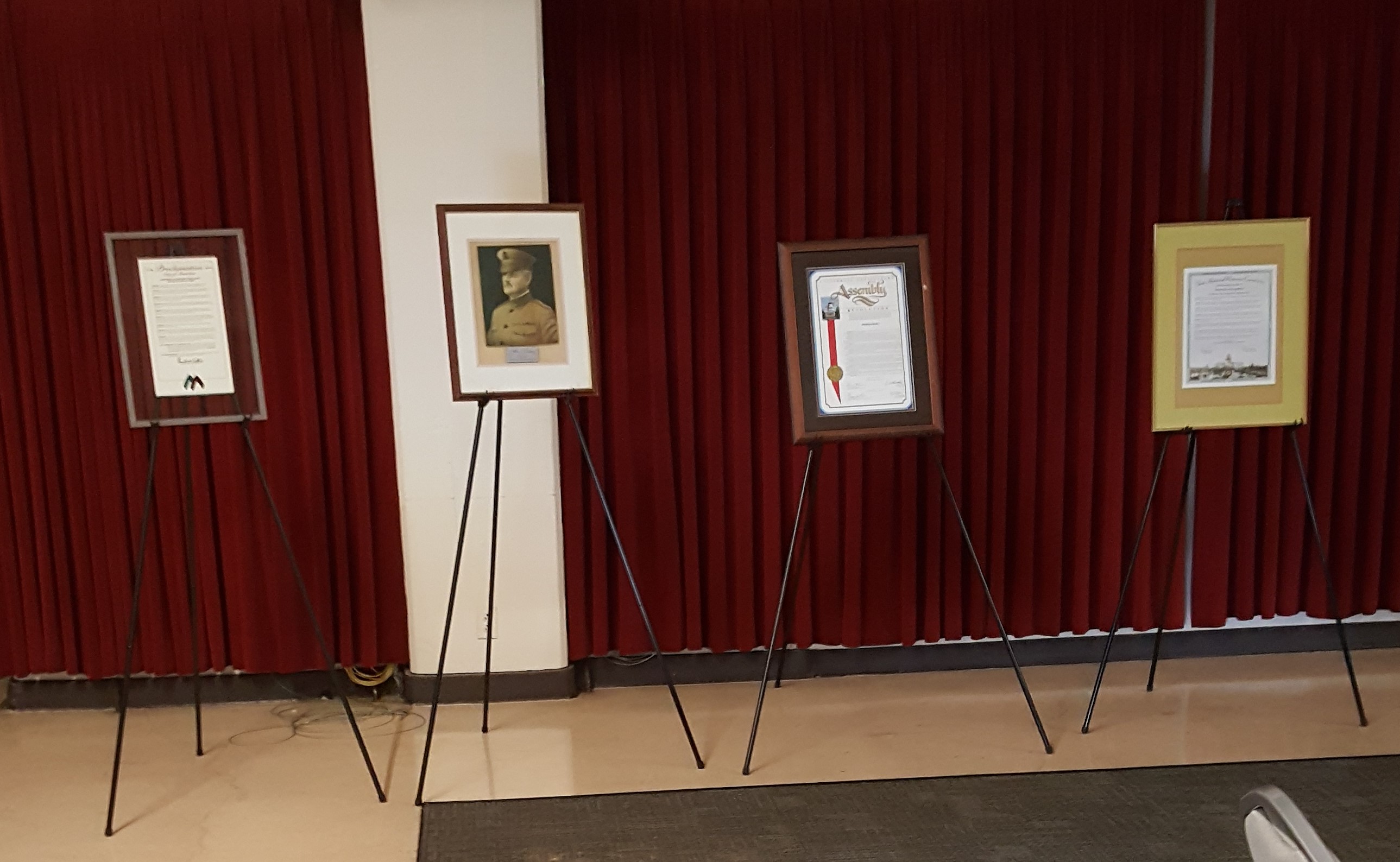 As I spent the morning setting up my enormous displays and hanging posters, maps and images, no evidence presented itself for the disaster that loomed.

As the conference began that morning and the first presenter spoke, the campus's Grand Salon filled with attendees. Collin Wonnacott presented an interesting paper called "War Brides of the AEF in Siberia," a rare, but fascinating topic. Then Micheline Golden was introduced. Her paper, "Pig 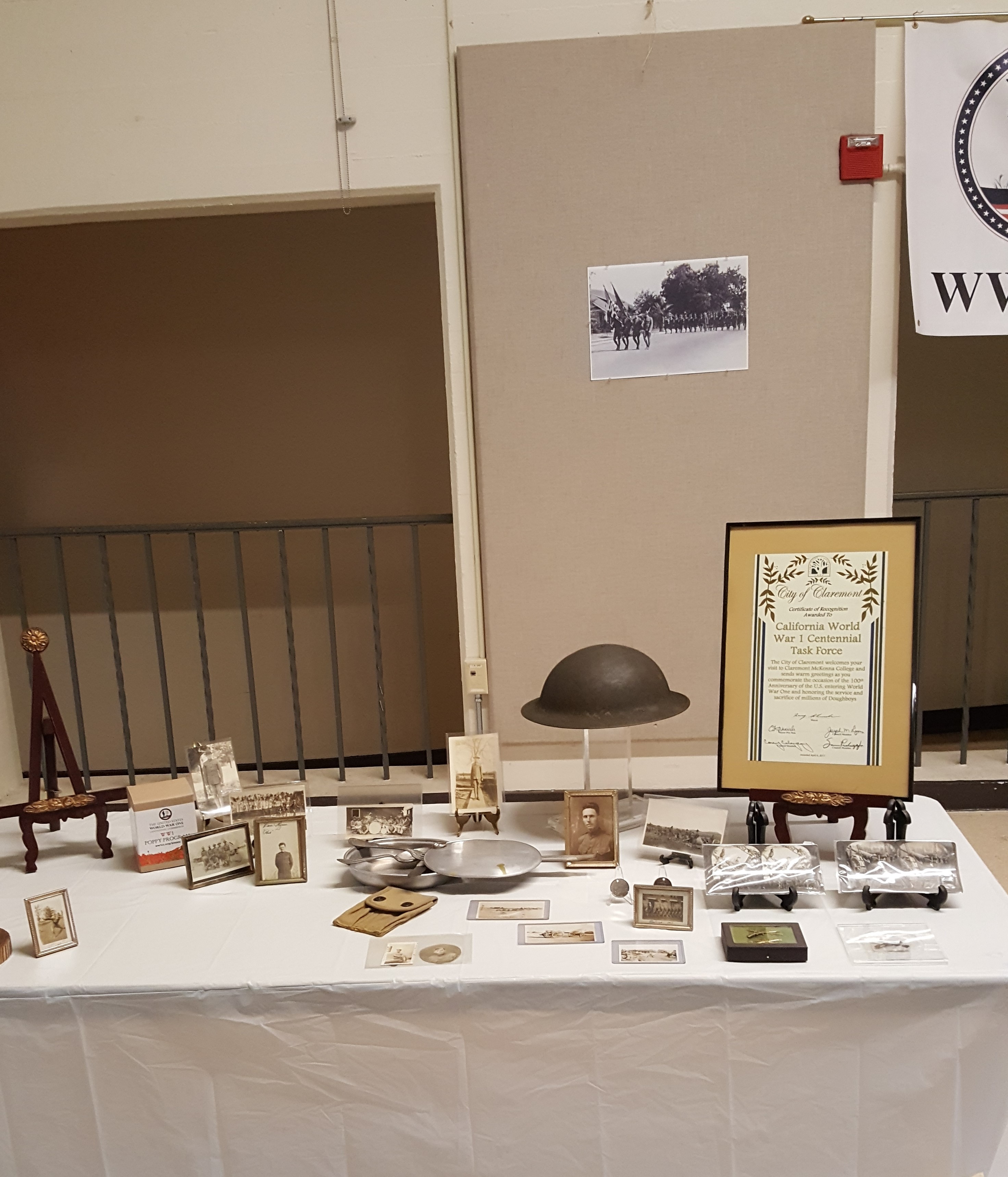 Kitters and Patriots: Rural American Women and Red Cross Relief Work During the Great War" was nearly complete when, for the first time since the schedule began, the doors opened and the organizers were taken aside. Moments later as Ms. Golden asked for questions from the audience, Dr. Corbett interrupted and apologized explaining that the conference was being terminated, and that the entire university was being evacuated due to a wildfire.

At the outset, the statement struck the crowd as though it were a joke, but clearly someone as serious about the success of the conference would not jest in such a manner. Was this part of the conference in some strange way? I for one could hardly grasp the purpose of such an announcement. 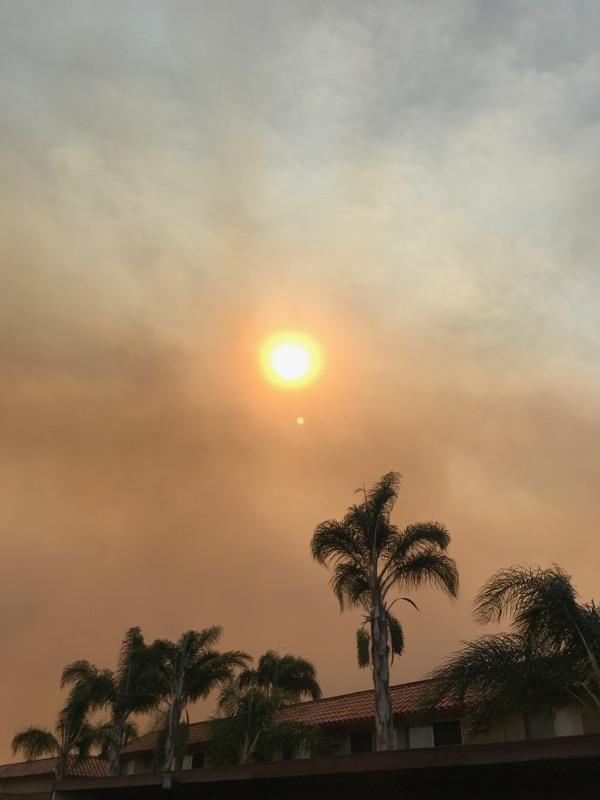 The smoke had already partially darkened the sky as its acrid odors were everywhere outside.At first, most in the audience as well were stunned by the news, and it took several announcements for all to grasp the urgency of the situation. It was not until after the doors were opened and the smell of smoke cemented the idea in place, did everyone realize the danger. Upon walking outside and seeing that the earlier blue sky was now painted orange and brown, participants audibly groaned to realize the 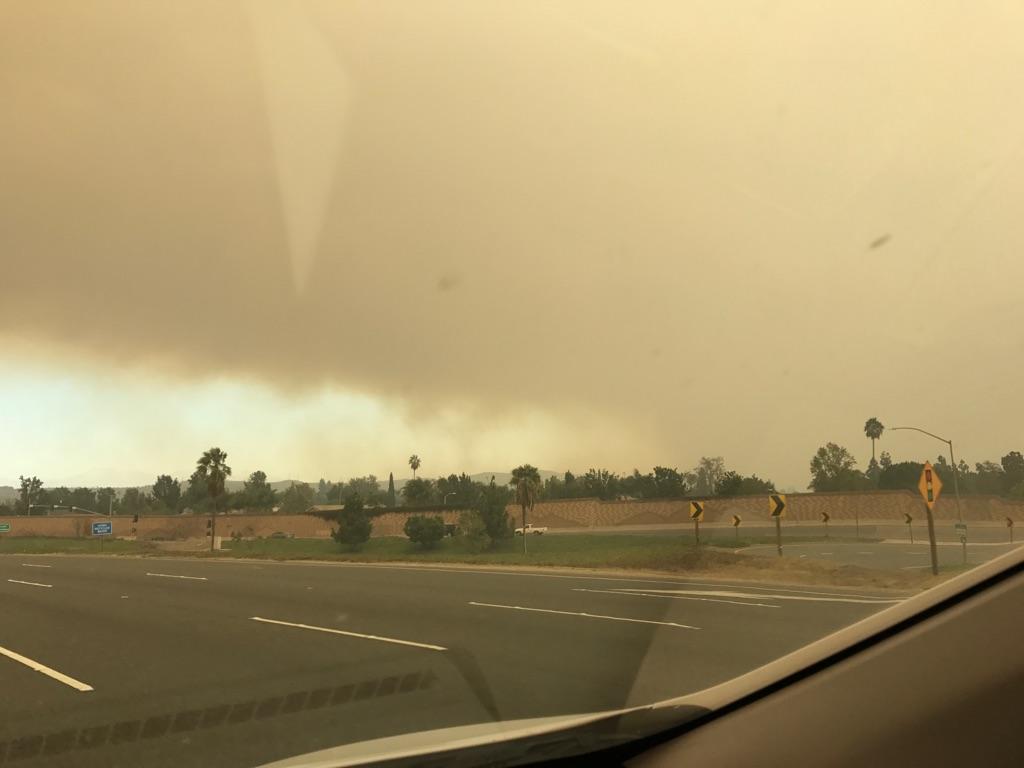 campus was being filled with smoke from not one, but two fires that approach from opposite directions. The bright California sun, that had previously warmed the morning, struggled to show even the hazy glow of a sun-setting disk, though still high in the sky.

All presentation equipment as well as my rare and valuable displays had to be abandoned in the rush to leave, though this did not happen as everyone had wished. All had to sit in bumper-to-bumper traffic to escape the area which took several hours to accomplish. Even a smaller college campus such as CSUCI must be populated by thousands in any one particular day, and each it seemed had their own car to take with them. 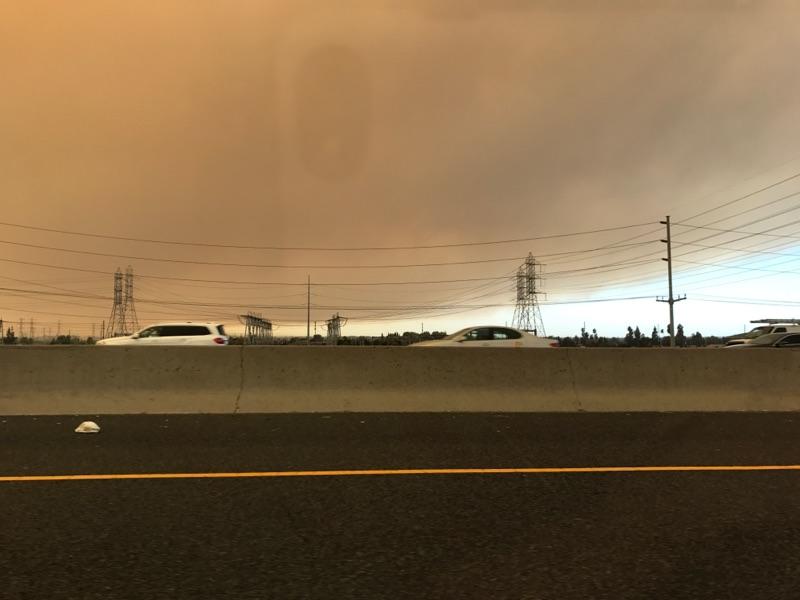 I spent the night in my hotel room but hardly got any sleep. I was so worried that hundreds of unique artifacts would be lost. Rare and hard to find items could easily be destroyed, even by minimal heat. Most had taken me years to collect. The photographs were irreplaceable. 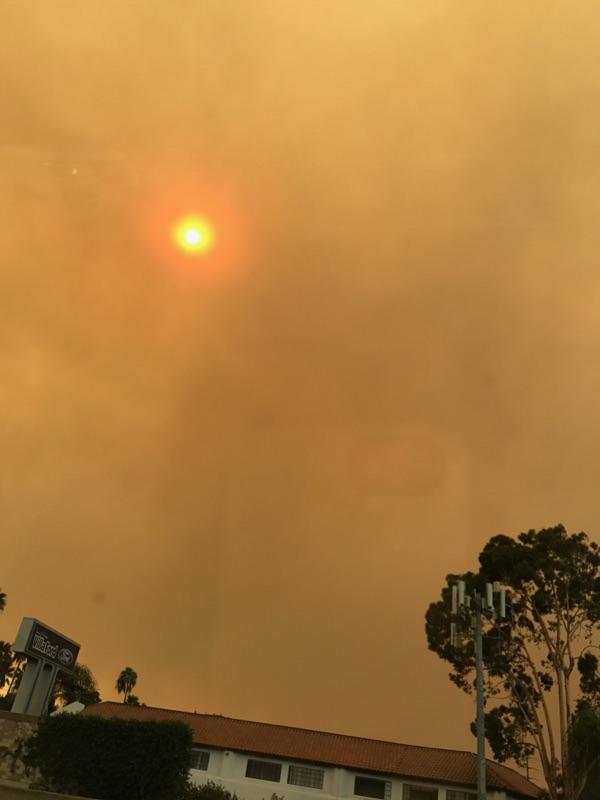 Wildfire of November 11, 2018 as seen from a Camarillo hotel later in the afternoon. At this time it was unsure that even the town of Camarillo would be spared disaster.Some, like my that of my grandfather's photo were copies, but others were singularly exclusive originals. Even my stereographs were by now one-of-a-kinds.

I could only hope, pray, and wait as the news reports came in.

Somehow I did manage to fall asleep for a little while because when I awoke very early, it was to the news saying the fire had started to shift away. I made a call to see if there were any way to return to the campus to collect my displays. Dr. Corbett said he would see what he could do.

That morning, the campus was still closed as the threat of fire still loomed, yet not as close. At times, it seems as though my request would be denied as at each checkpoint a new, and even more unyielding officer needed convincing. Through a miracle I was given entrance and permission to retrieve my stuff, but was instructed to, "act fast as no one was sure that the winds would not shift." 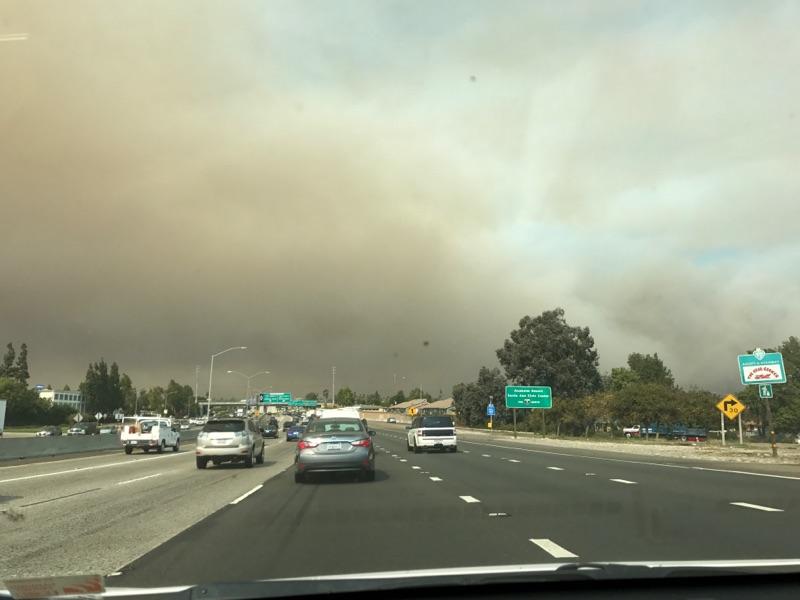 My packing was not as meticulous as usual and I still faced a long and arduous drive home past the fires now burning toward the highways I must travel on, but eventually I, and my precious cargo made it safely home.

Days later by phone, I was informed that Dr. Corbet and Dr. Powelson still planned on publishing all of the papers that were to be presented at the conference, and that more details are pending. Needless to say, I can safely admit that it was a conference unlike any I had ever attended before.