Sponsored by The Public History Institute at CSUB 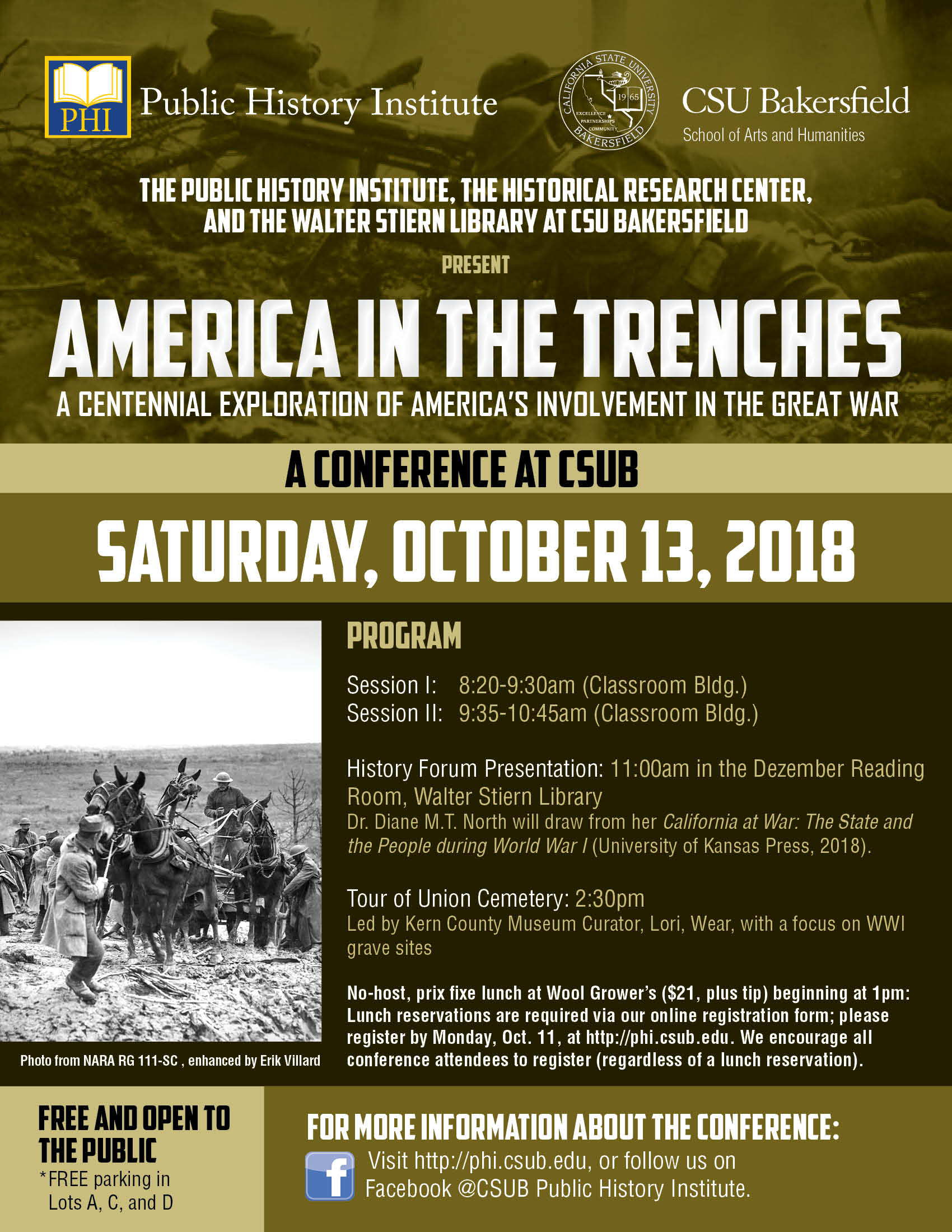 The California State University Bakersfield Department of History demonstrated the ability to provide a thought provoking conference when they opened their doors to participants and audience members at their History Forum and Public History Institute's  America in the Trenches - A Centennial Exploration of America’s Involvement in the Great War conference.

Dr. Miriam Vivian had invited the the California WW1 Centennial Task Force to present a World War One display which Co-Director Bill Betten and his wife Joni Betten were happy to supply. 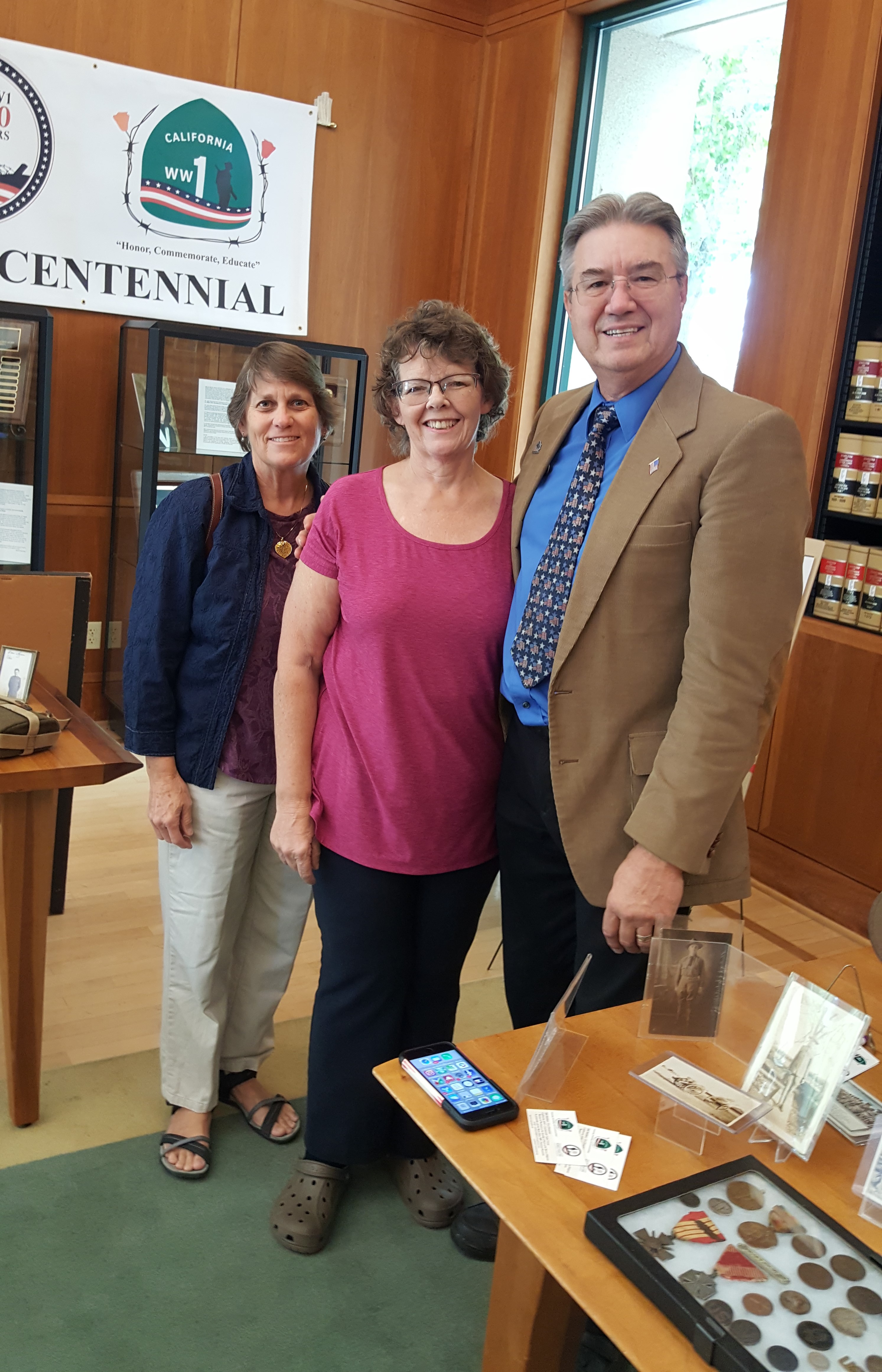 Dr. Miriam Vivian of the UCSB History Department expressed many thanks to Mrs. Joni Bettten and her husband, Co-Director Bill Betten for making the trip and all the effort.

Beginning at 7:45 a.m. the conference check-in in the Humanities Office Bldg. offered attendees coffee, fruit, and bagels to awaken interests and fuel their groggy stomachs before starting The four sets of panel each containing multiple presentations.

Session I, ran from 8:20 to 9:30, with the option of attending two different, but simultaneous panels. 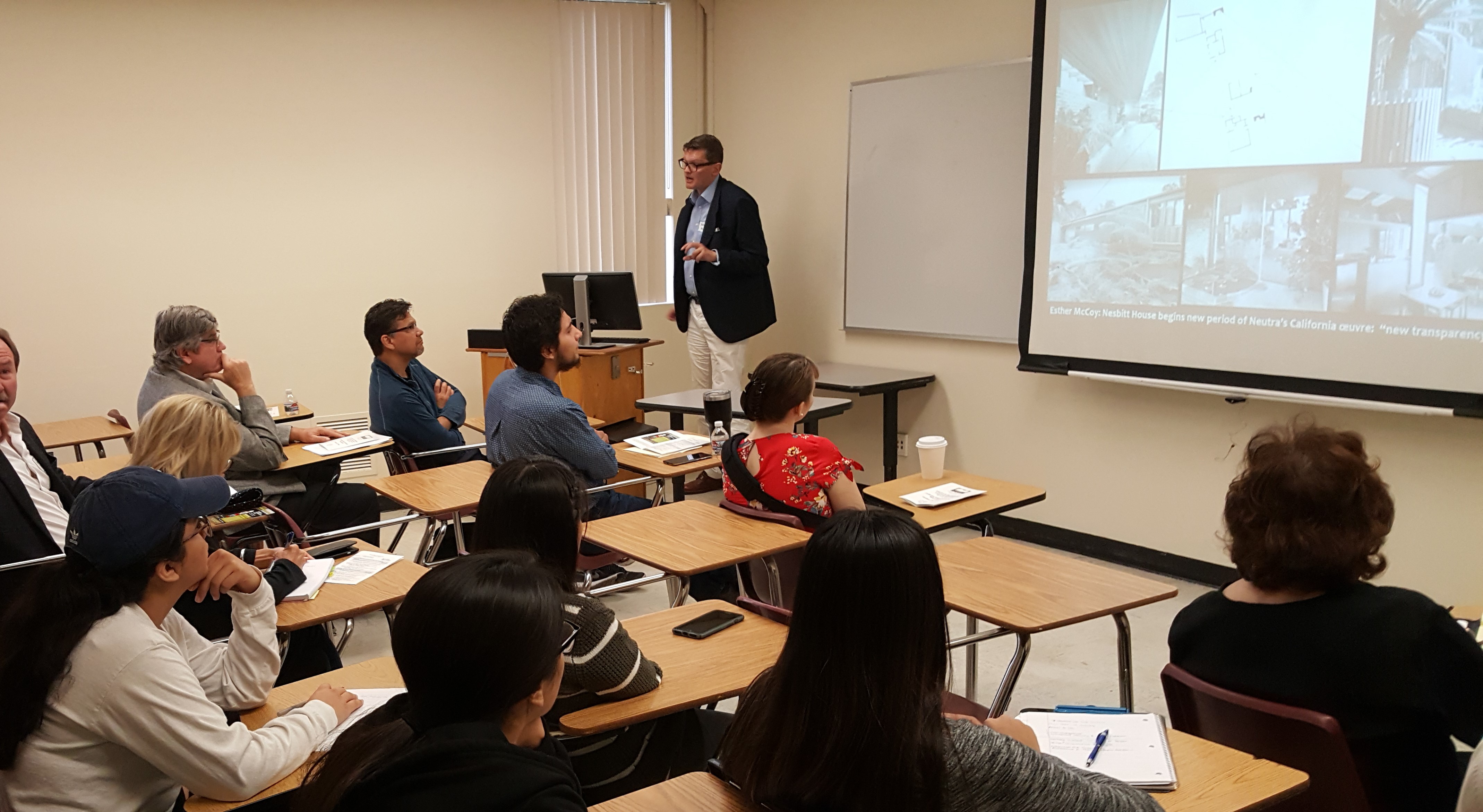 Professor Volker Welter of UC Santa Barbara speaks at the CSUB WW1 conference on how WW1 effected domestic architecture.Panel A, entitled: The Effects of World War I on Southern California, was chaired by Dr. Douglas Dodd, and included three presentations.

First was “The Great War as Civic Development: Long Beach, 1916-1925” by Craig Hendricks, of the Historical Society of Long Beach. Second was “Echoes from the Great War: Richard Neutra’s Domestic Architecture in 1940s Southern California” presented by Volker M. Welter, Professor of History of Art and Architecture, UC Santa Barbara. And the third was titled “Plague in the Boomtowns: The Spanish Influenza in Bakersfield and Kern County, 1918-1920” which Garth Milam, MA, CSU Bakersfield presented. 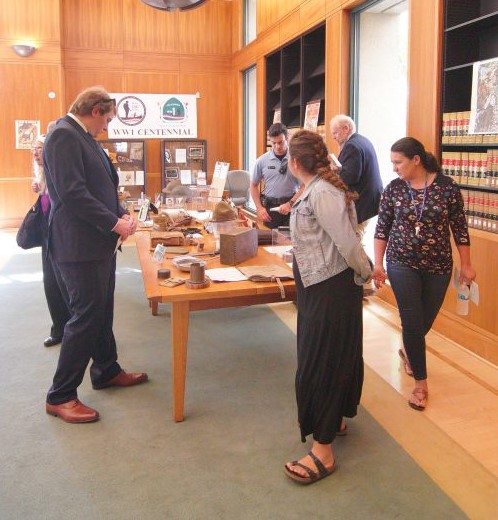 Conference attendees examine the WW1 display next to the California WW1 Centennial Task Force table. (Photo courtesy of the Public History Institute)At the same time Panel B, entitled, Archives, Women, and Art in World War 1 gathered in a room across the hall chaired by Dr. Marie Stango where Archives of the Great War, Women’s Experiences in the War, and the War’s Effects on Art was offered by Chris Livingston, Archivist, Historical Research Center and Lori Wear, Curator, Kern County Museum. At that, a CSU Bakersfield student, senior Judith Carrillo, spoke 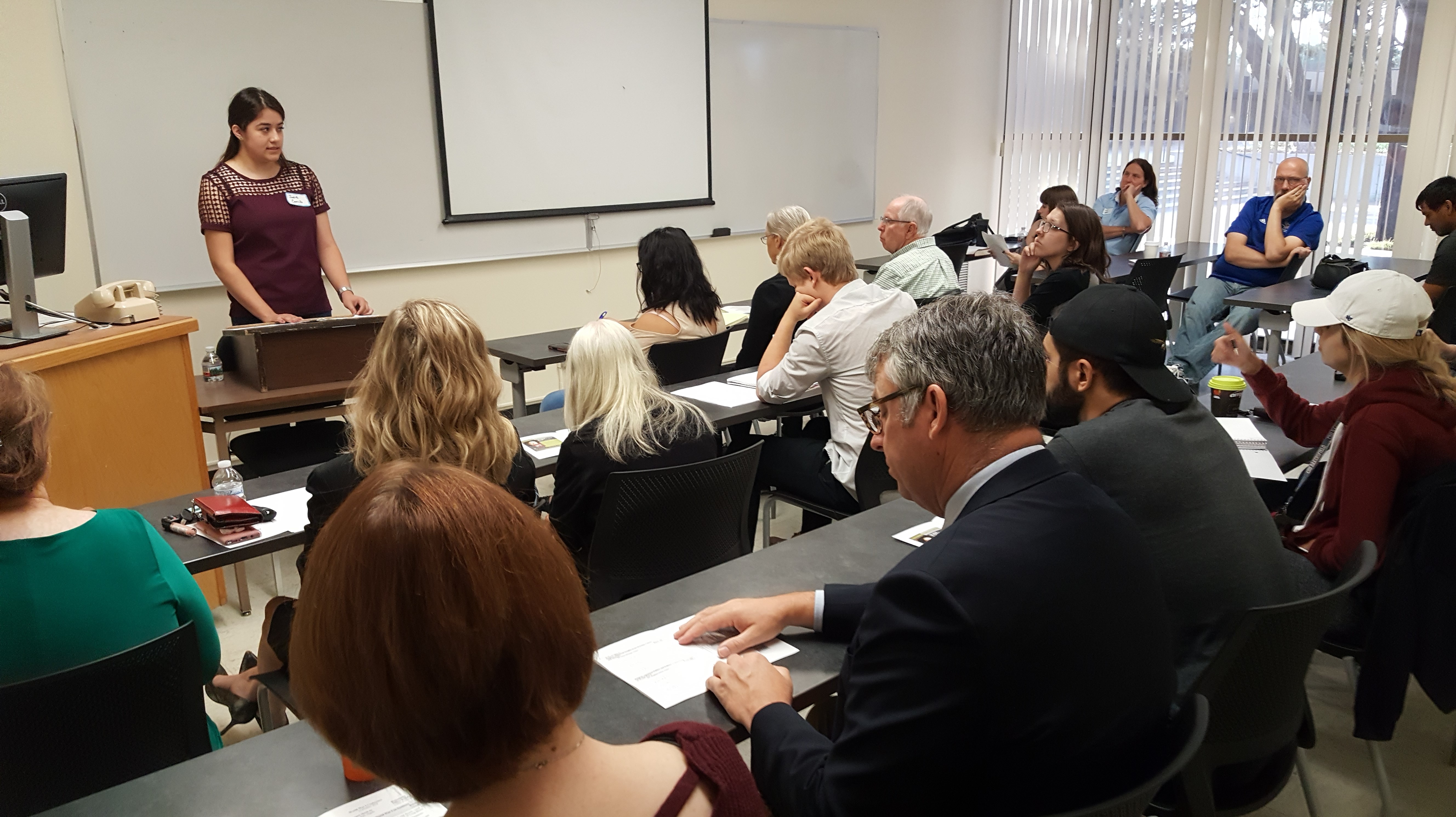 CSU Bakersfield senior Judith Carrillo speaks to an interested group during Panel B. on “World War I and its Effects on Vera Brittain’s Life” followed by “The Effects of World War I on Art: Living History and Emotion through the Lens of Child and Adult Art” by Dianne Turner, Professor of Art Education and
Jennifer Arthington, PhD, Lecturer in Art Education and Psychology, CSU Bakersfield.

In Session II from 9:35 to 10:45 a.m. Panel C, called Historical Insights from Wartime Letters and Memoirs
chaired by Dr. Sean Wempe, ran in Rm 103. This panel topics were “The Spanish Flu at UC Berkeley”
offered by CSU Bakersfield senior, Americo Prado, “'On the Sacred Soil’: Remembering June 1918 and the U.S. Marines who Fought in France” by Darin D. Lenz, Assoc. Prof. of History, Fresno Pacific University, and “1918 War Letters: Deception to Protect the Family, A World War I Case Study” presented by Ava F. Kahn, PhD in History, UC Santa Barbara,listed as an independent scholar.

Concurrently, Panel D engaged the heading of American Politics and Policies: Connections to World War I in Rm. 104 chaired by Dr. Steve Allen. Robert Wells, a senior at CSU Bakersfield spoke on “For Country or Homeland: The Challenge for German Americans during World War I” While another CSU Bakersfield senior, James White, submitted “World War I and The United States’ Occupation of Haiti.” Mark Martinez, Professor and Chair of Political Science, CSU Bakersfield presented “Is History Whispering in our Ear?” 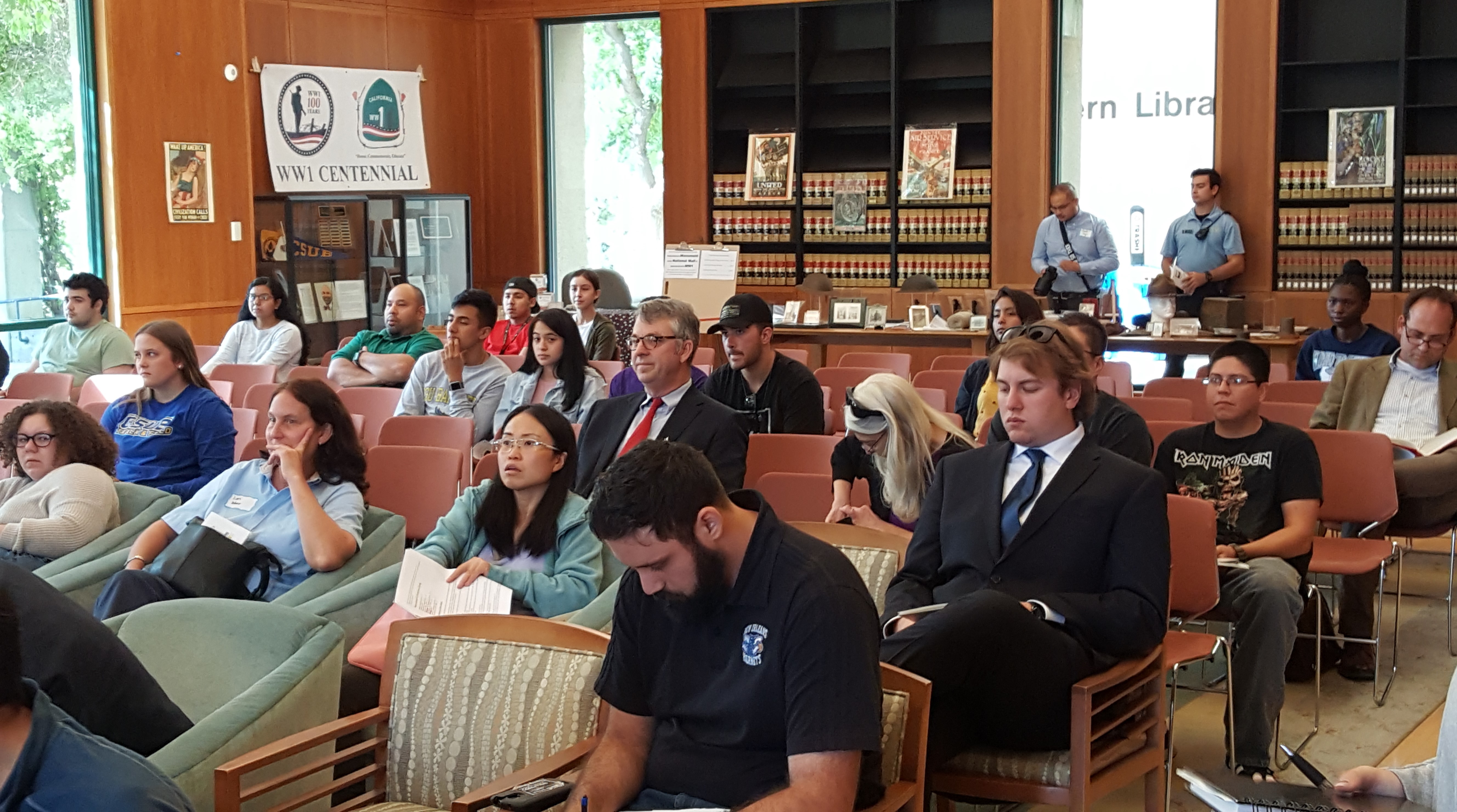 The audience settled in after viewing the California WW1 Centennial Task Force display. A portion of the cww1ctf display can be seen in the rear.

Task Force Co-Director Bill Betten and his wife had been asked to exhibit Bill's impressive collection of WW1 artifacts, original photos, and centennial certificates and proclamations. Bill answered general questions about the display while Joni oversaw a table specifically to answer questions about the Task Force and fundraising for the new WW1 Memorial in Washington DC. The California WW1 Centennial Task Force display due a lot of attention as the conference participants shifted into the main lecture hall of the facility. The display included actual artifacts that the American Doughboys carried, as well as some from allied and enemy soldiers. At one side of the room stood many of the state and local proclamations from throughout California commemorating those who served and recognizing the California WW1 Centennial Task Force as the state's official centennial commemoration organization. Here a complete original uniform from the US Army Air Corp stood proudly. 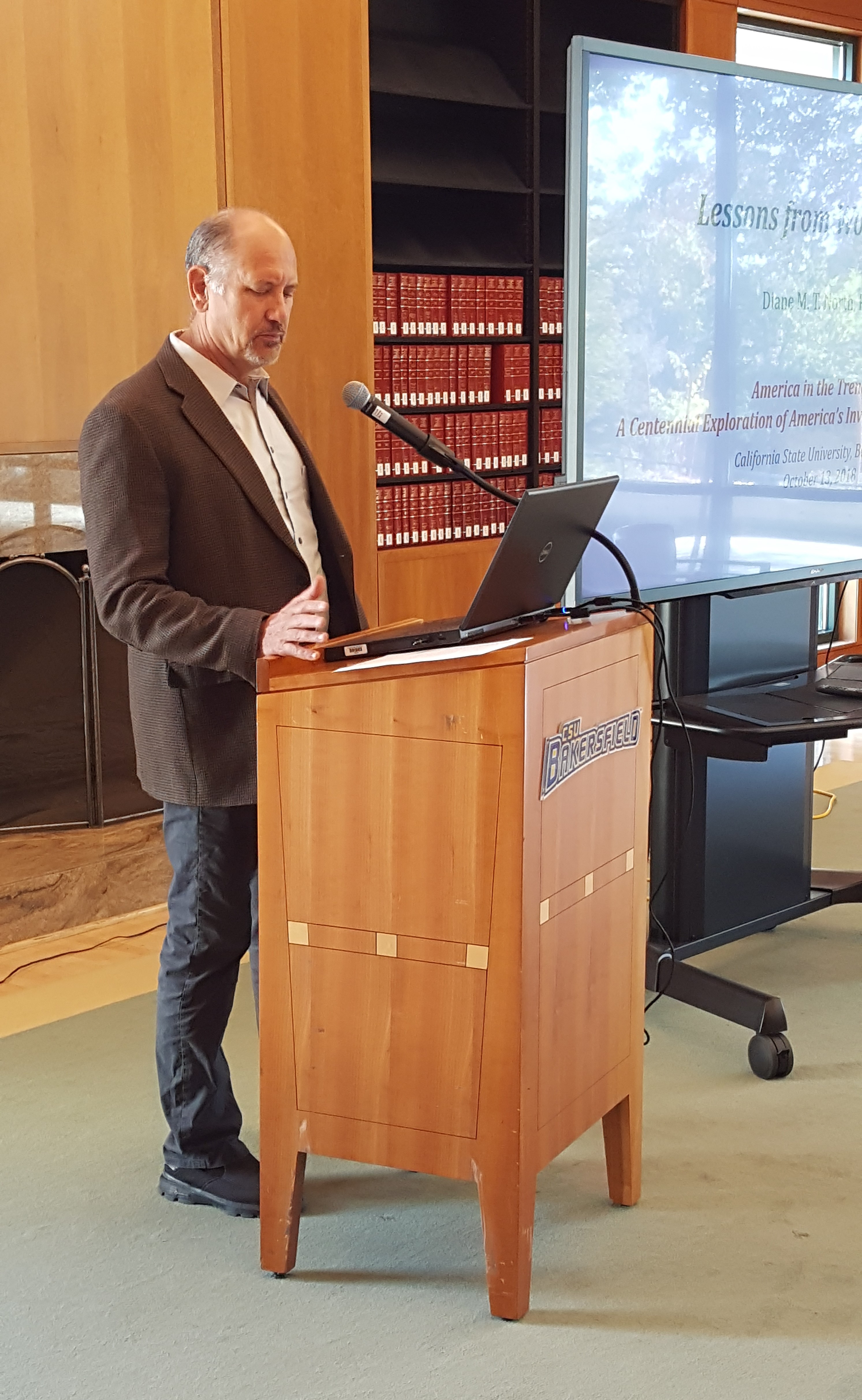 CSUB Dean, Curt Asher greets the audience and kicks off the second half of the conference.At 11:00 a.m., the keynote address 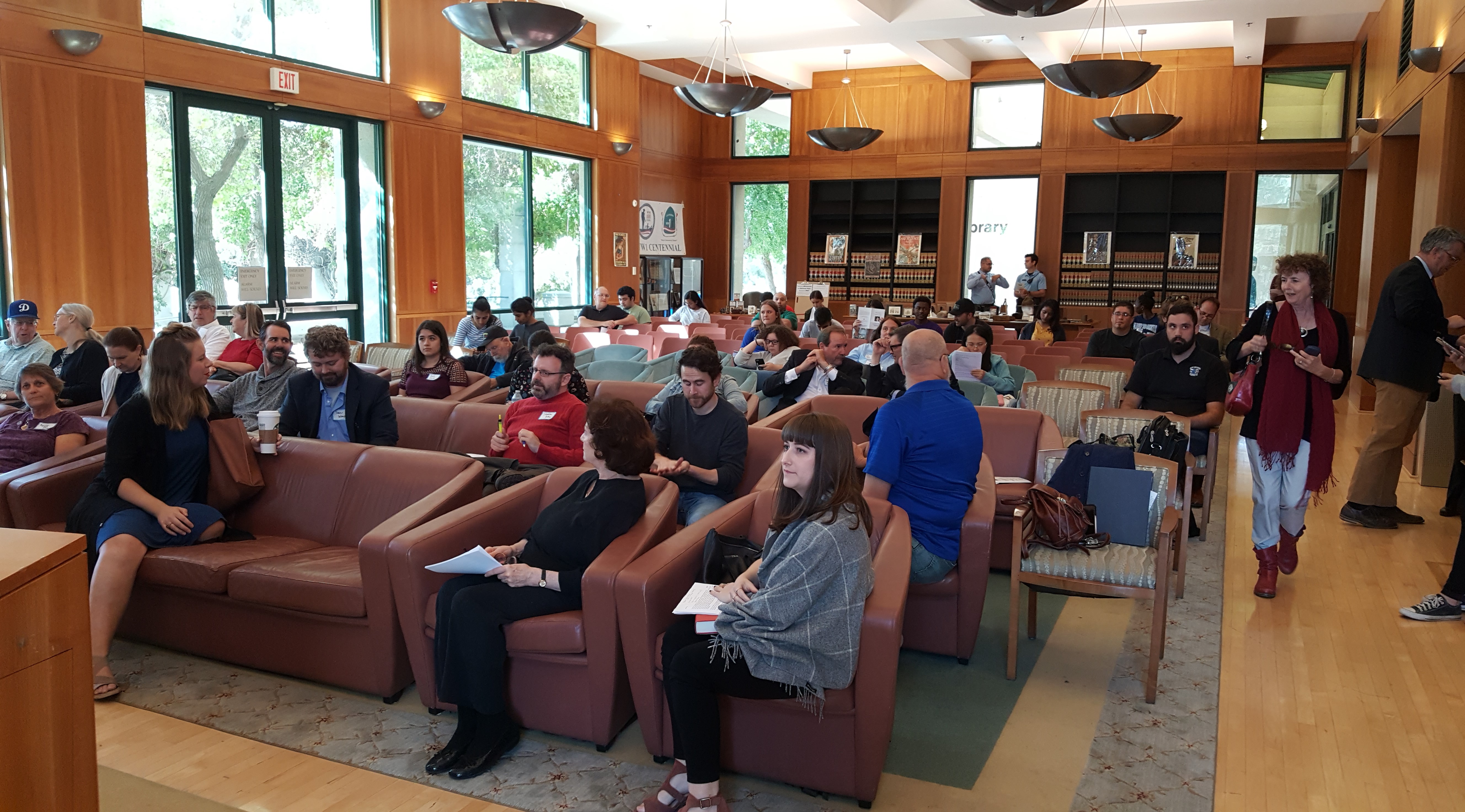 The CSUB WW1 Conference Participants await the second portion of the day which included the keynote speaker. was presented in the Dezember Reading Room in the Walter Stiern Library. As participants settled into thier seats for the keynote presentation, many continued taking notes on the California WW1 Centennial Task Force World War One display until CSUB Dean, Dr. Curt Asher began opening remarks and introduced Dr. Miriam Vivian, organizer for the event. 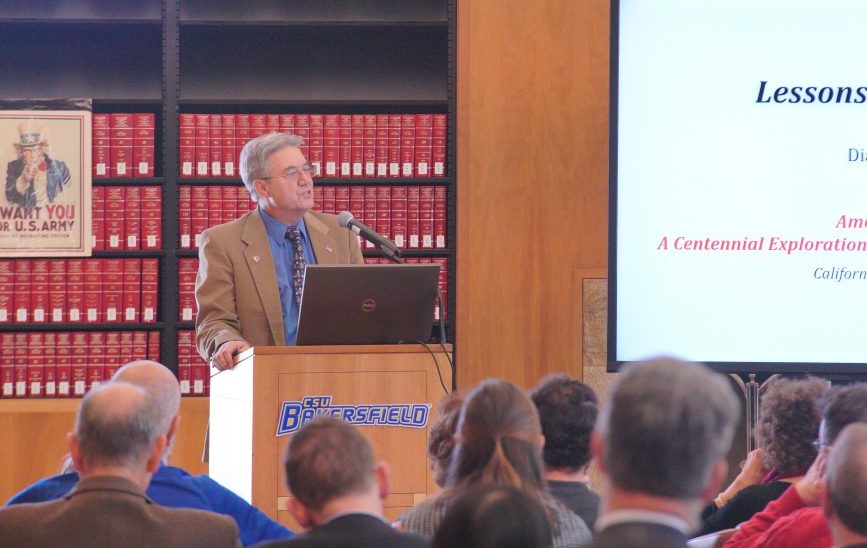 Co-Director Bill Betten talks about the "Bells of Peace" and the efforts to place a World War One monument on the National Mall in Washington DC. (Photo Courtesy of the Public History Institute.)Before continuing, Dr. Vivian introduced Bill Betten whom she had asked to tell about the Task Force and the United States World War One Centennial Commission's "Bells of Peace" bell tolling initiative. She also asked him to explain the commission's mission and plans to place a WW1 Monument on the National Mall in Washington DC and the fundraising efforts to that end. 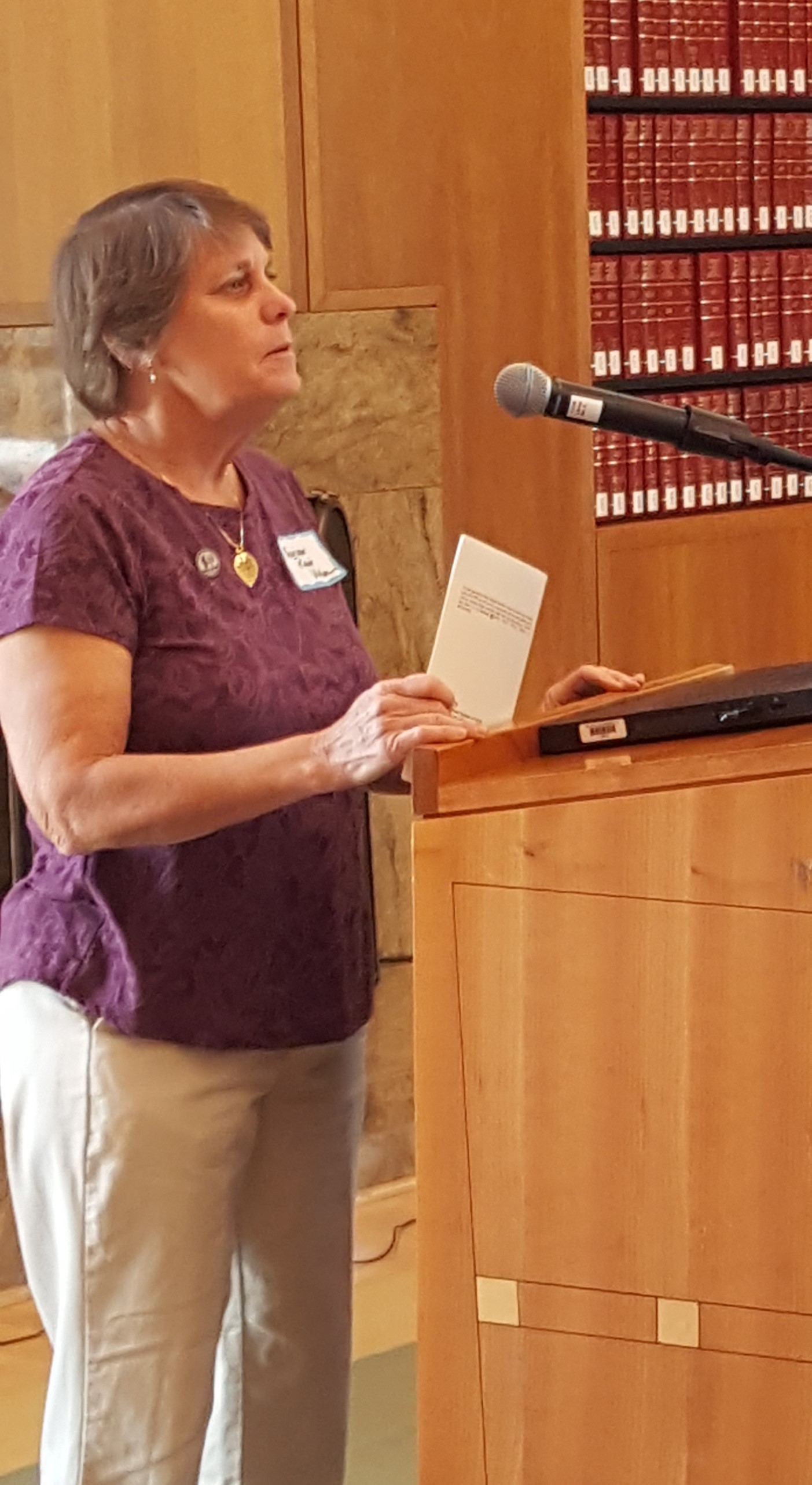 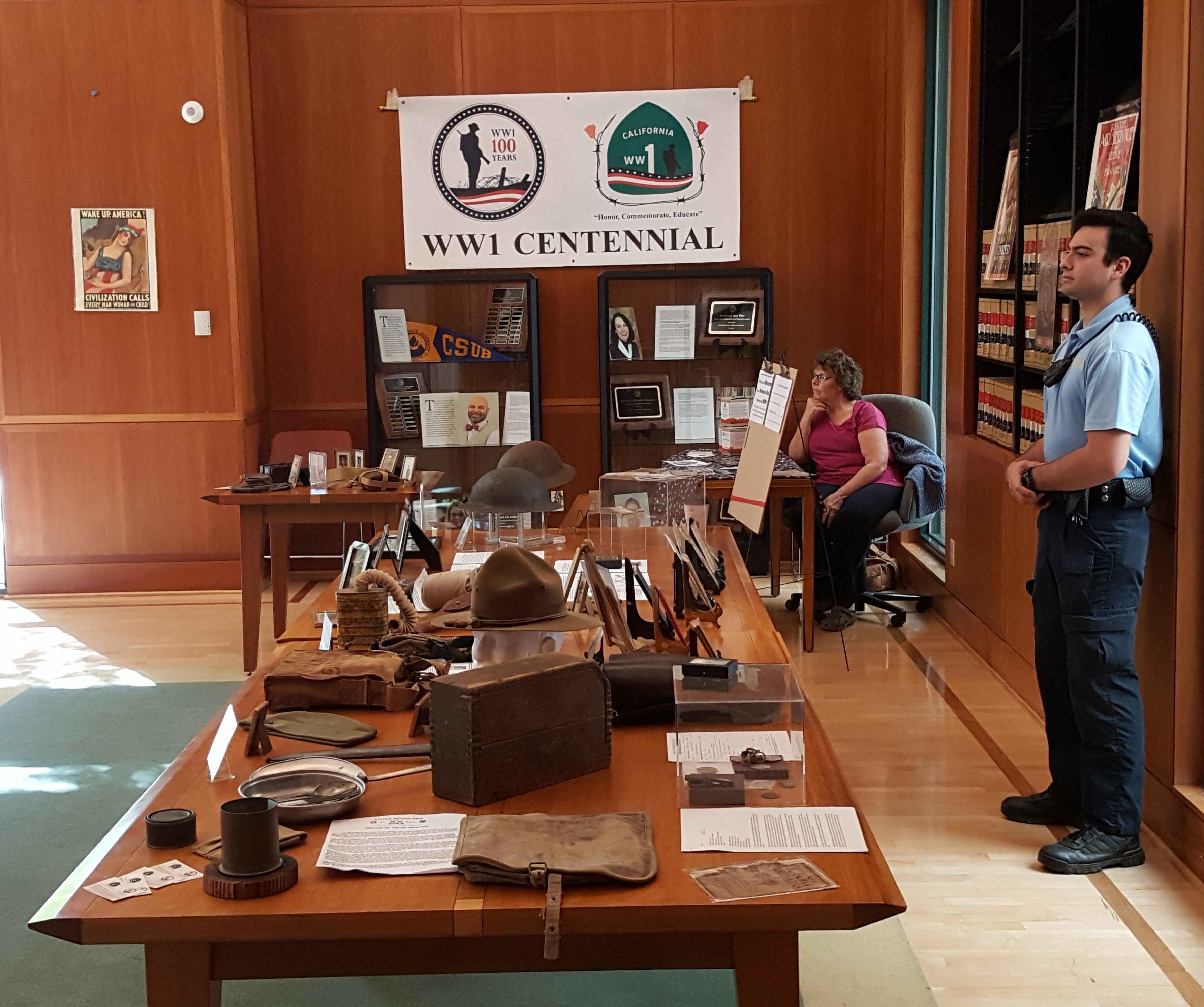 Joni Betten sits at the California WW1 Centennial Task Force table intently listening to the speakers at CSUB as a security person who slipped in to listen also took great interest in the topic.

The History Forum's keynote speaker Dr. M.T. North of the University of Maryland University College addressed the topic, "Lessons from World War I." The History Forum is created and sustained by the faculty of CSUB's Department of History. Since 1999, the History Forum has invited, local, national, and international speakers to discuss their research or address some topic relevant to the study of history. 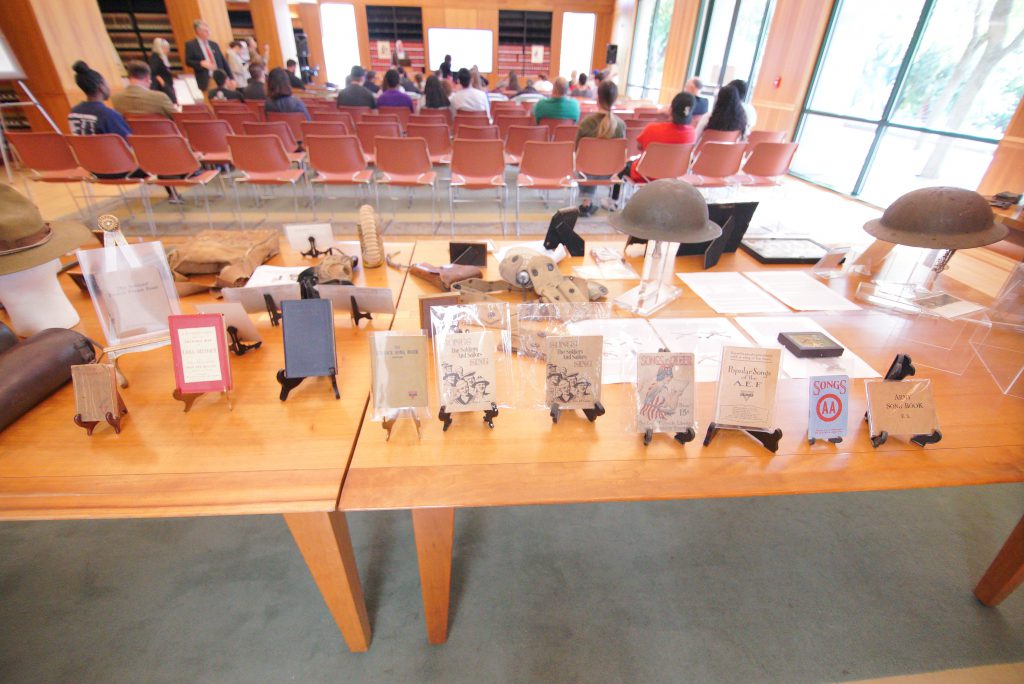 For more information about the CSUB History Forum visit http://www.csub.edu/history/index.html