Presented by
The California World War I Centennial Task Force
November 12, 2018 at 1:30 pm 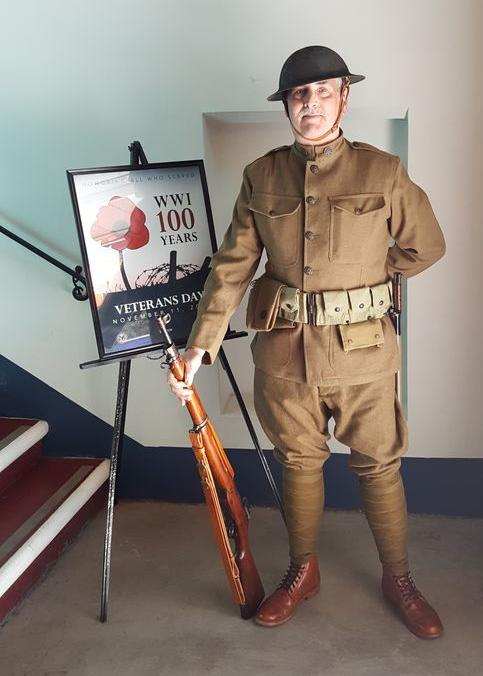 Besides renewing old acquaintances, I always enjoy visiting the Hollywood Post 43 American Legion Building if for nothing more than just to appreciate the architecture and its history. The nearly one-hundred-year-old building has a lot of history. Its interior walls are covered with rare headlines from newspapers and photos of its famous members. Likewise, its archives are abundant with artifacts and American treasures that few can find these days. 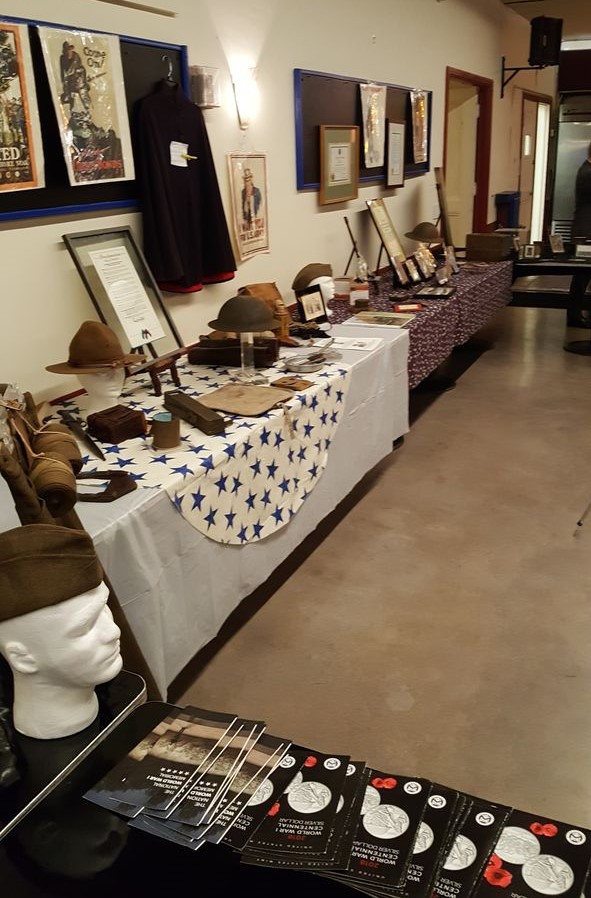 This day's commemorative program for the centenary of the Armistice, endorsed and produced by the California WW1 Centennial Task Force, strove to educate as well as entertain those who attended.

It was more than fitting that I should attend the Armistice Centennial Event being held at the American Legion post of which I am a "Sons of" squadron member, but having been asked to also play a speaking role in the program and having the honor of setting up a display, only made it that much more inviting for 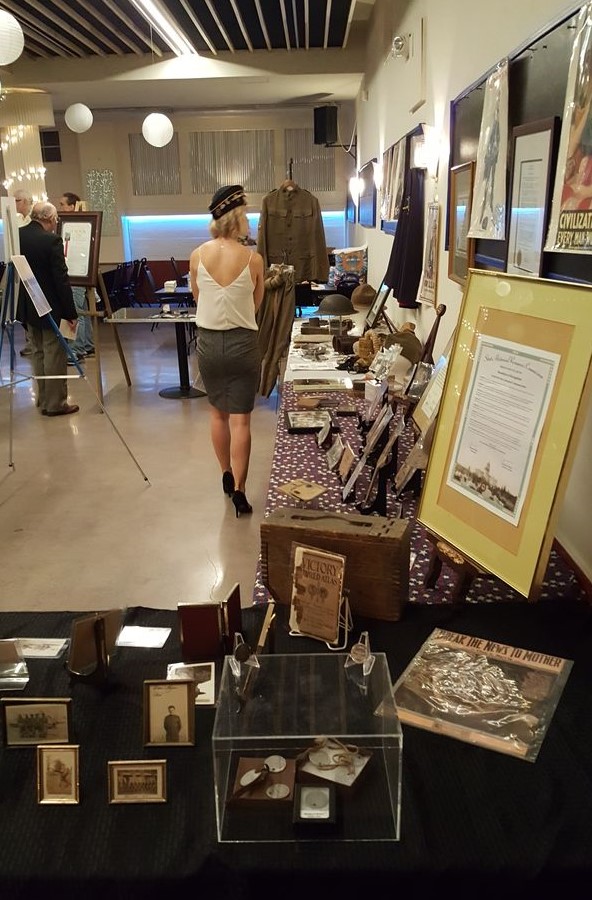 me. Though Post 43 has quite a number of World War One artifacts it can proudly boast, I was still permitted to exhibit the items I have been using over the past four years throughout Southern California for presentations during the centennial of the Great War. 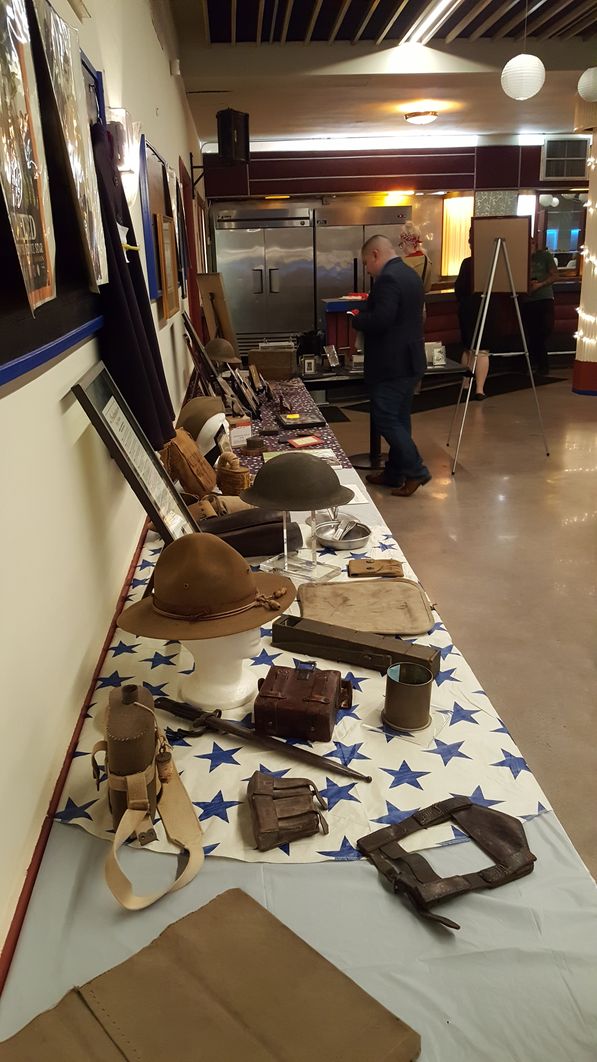 As has been my honor over the course of the centennial, it was a distinct privilege to observe the many faces with inquiring eyes that inspected and considered my pieces on exhibit, while learning from their display. But, it was that much more gratifying to watch these retired warriors examine and deliberated the collection. They also expressed how important it is that those who come behind take interest and grow eager to learn of the valor represented in these few items, that we Americans absorb and study the past, in order to wisely scrutinize the future. 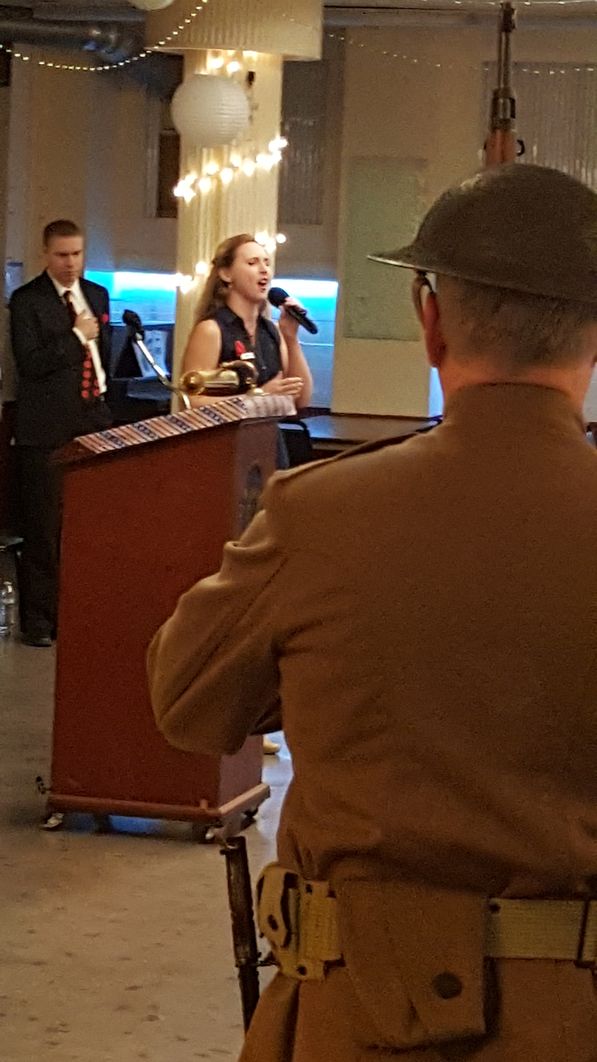 The program began with Sarah Lonsert performing a lovely rendition of the Star Spangled banner. As event writer and emcee, my fellow Co-Director Courtland Jindra said that he was "avoiding pontificating speeches" and only introduced and summed up the proceedings, letting "the history speak for itself." 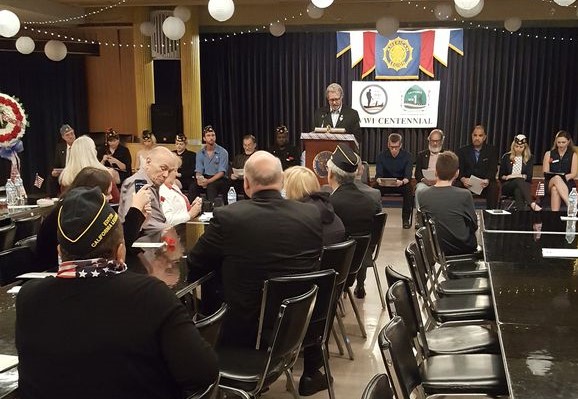 Narrator Jonathan Flora speaks to those in attendance from the podium while line of guest speakers sit behind him. Using a similar format to one he had written for the centennial of the entry of the United States in the Great War, Co-Director Jindra attempted to transport the audience back to the beginning of U.S. participation. Veteran and director-producer Jonathan Flora narrated the history of U.S. involvement in the war. The program began with a lead-up to President Wilson's address to Congress and finished with General Pershing 's letter thanking his troops the day after the cease fire went into effect. 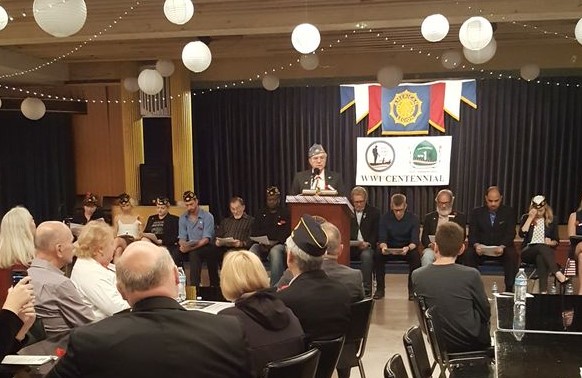 Items performed included excerpts from Los Angeles Times articles, quotations from Doughboys in the field and General officers as well as Hello Girls, and eyewitness accounts from other countries. I was proud to be asked read some of these narratives as well.

The program endeavoring to tell a comprehensive story from the home front to the Western Front's finale in the Argonne. Highlights included Fernando Rivero reading French Officer Jean de Pierrefeu's remembrance of seeing Americans arrive in the line at a crucial moment, as well as a cadre of gentlemen who performed thoughts of various American foot soldiers. 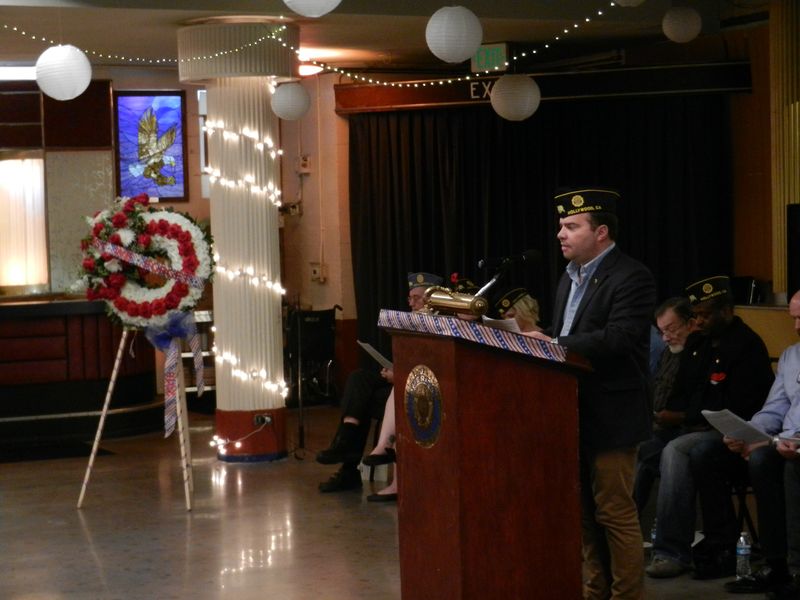 Buddy Watson did double duty also reading German Quartermaster General Erich Ludendorff (with a German accent.) The show stopper of the ceremony was when Ms. Lonsert sang the hilarious "If He Can Fight, Like He Can Love (Goodnight Germany)" with the perfect amount of sass. The crowd laughed repeatedly and showered her with applause. Mr. Flora even broke his Narrator demeanor with a comment on how racy the tune was before returning to his script. 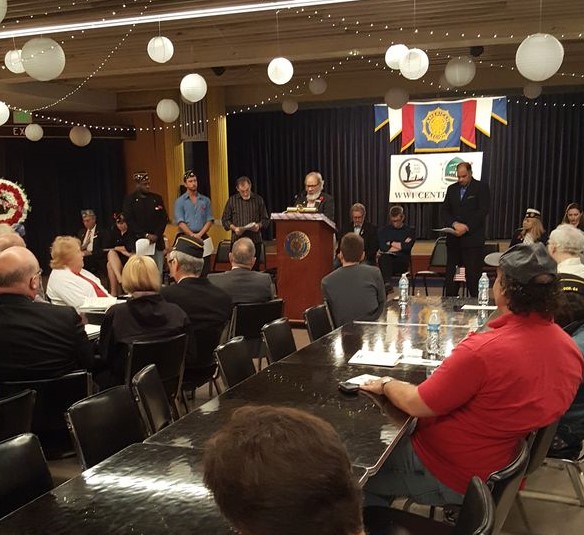 Member of Veterans of Film & Television, Jack Kennedy, ended the tale by reading the thank you telegram General Pershing sent to every unit in the AEF to be read after the guns went quiet. The Mayor of Los Angeles's Military and Veterans Affairs Director, Larry Vasquez laid the memorial wreath, with an assist from a Doughboy re-enactor as Jindra asked for a moment of silence. 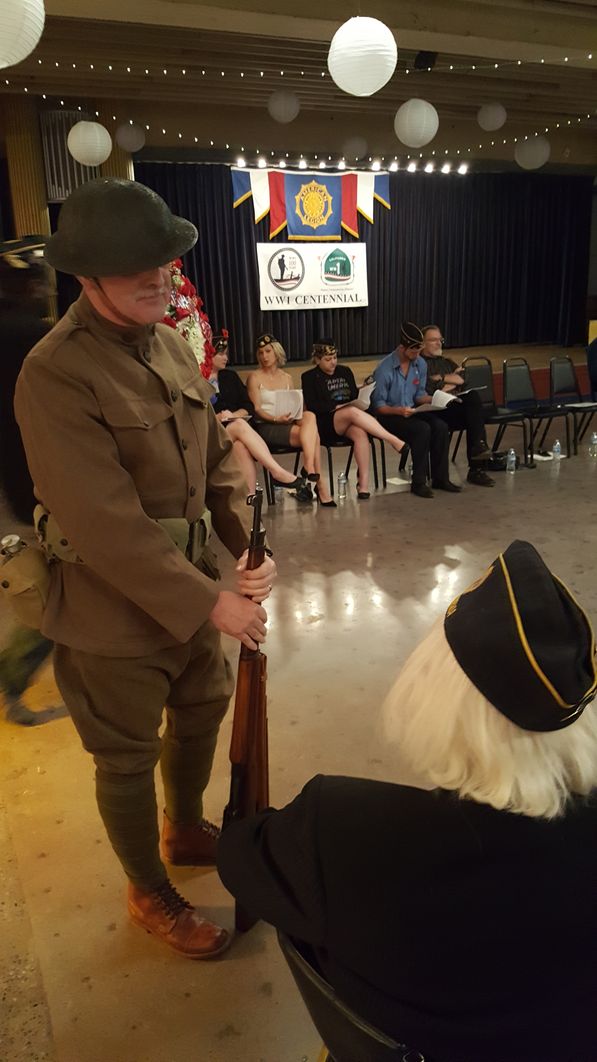 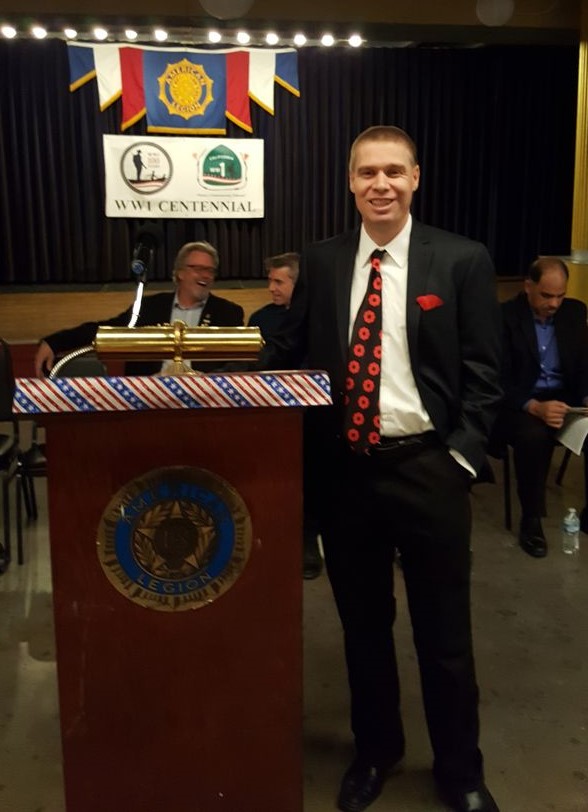 I personally heard my fellow members of the Sons of the American Legion say how they were very impressed.,"Compliments are again due to Courtland (Jindra.)" It seemed clear that everyone agreed it was a fitting tribute to the war that changed the world. 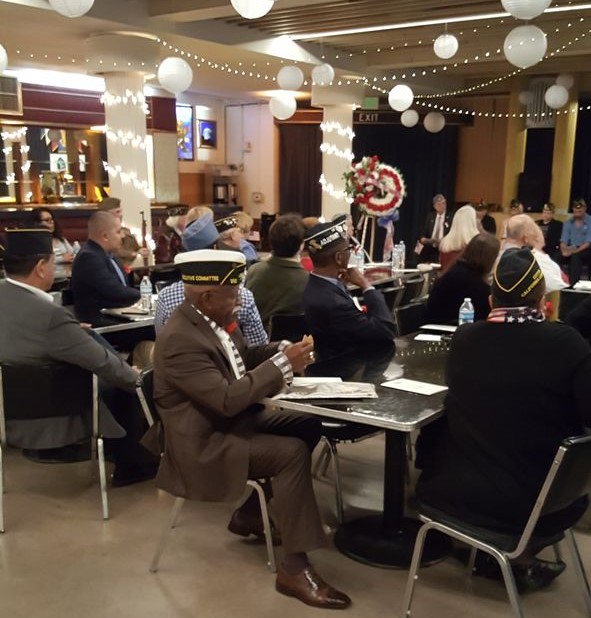 Post 43 audience concentrates on the Armistice Centennial Event presentation with much interest. 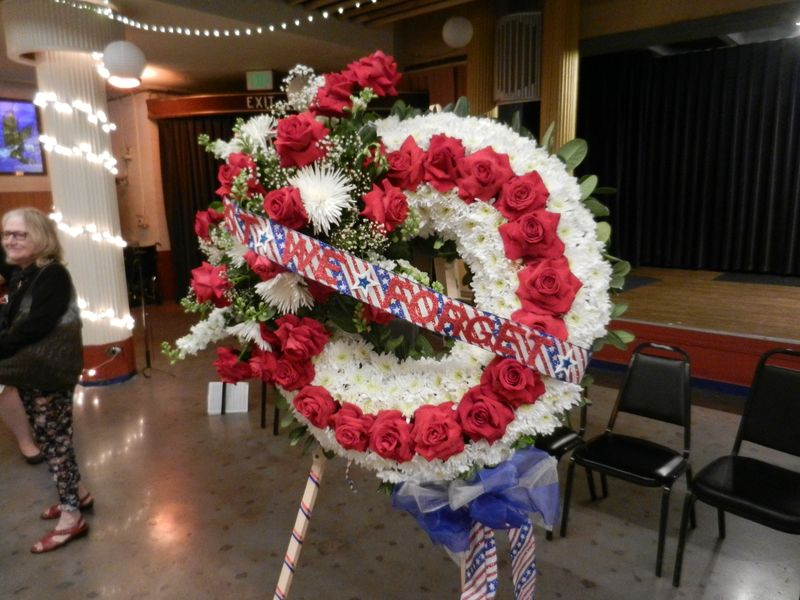 WW1 Commemoration wreath used to honor those who served one hundred years ago. 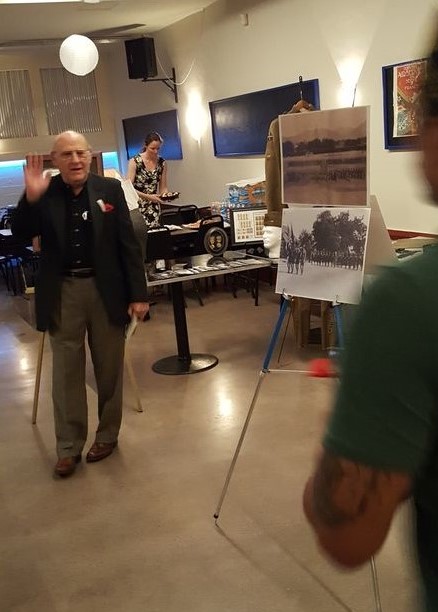 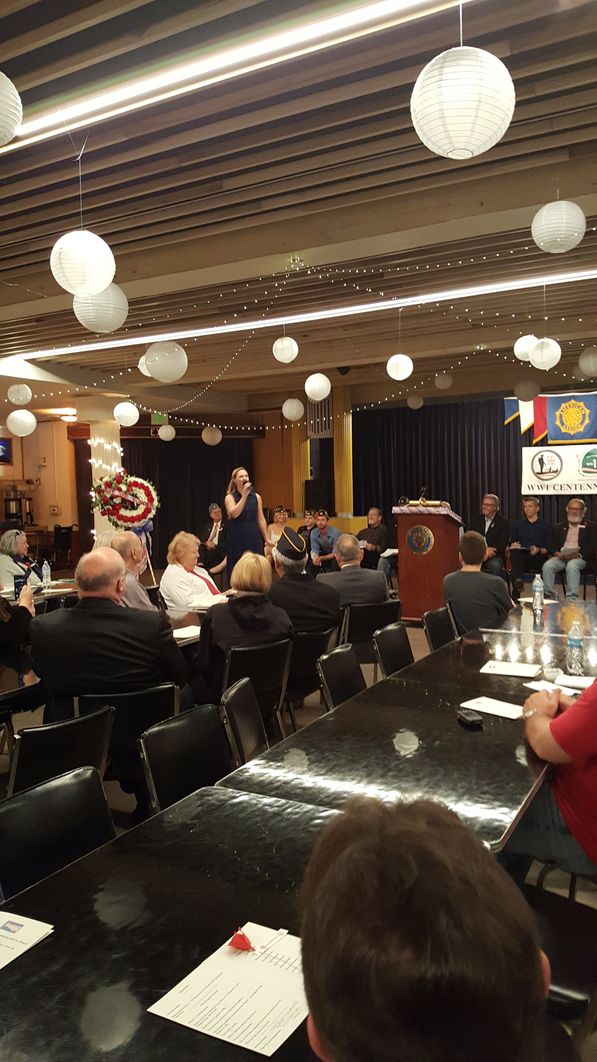 Presenting a bit of 1918 comedic fun, "If He Can Fight, Like He Can Love - Goodnight Germany," Sarah Lonsert got the audience smiling at the WW1 vintage tongue-in-cheek (forgive the pun.) 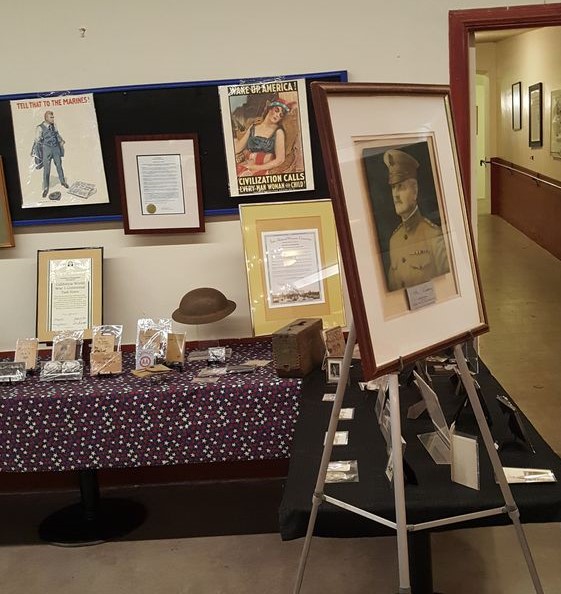 Bill Betten's WW1 exhibit on display at Post 43 in Hollywood. 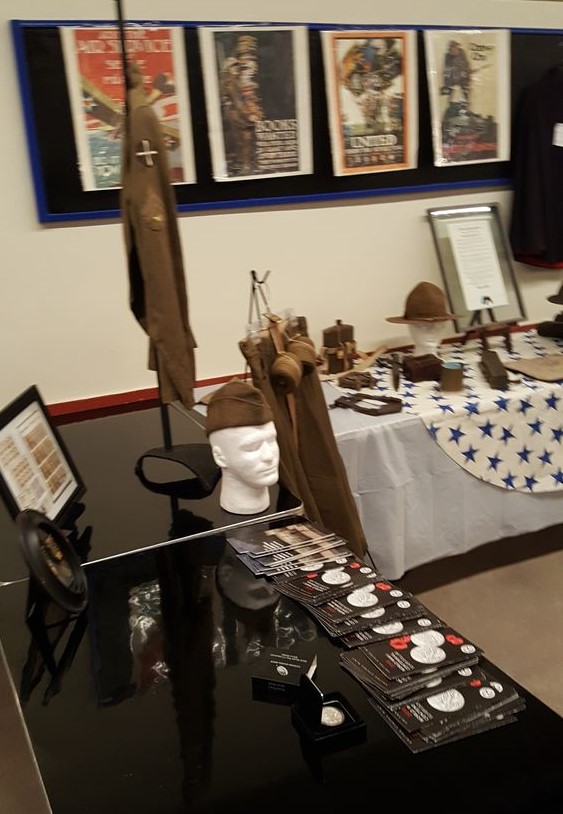 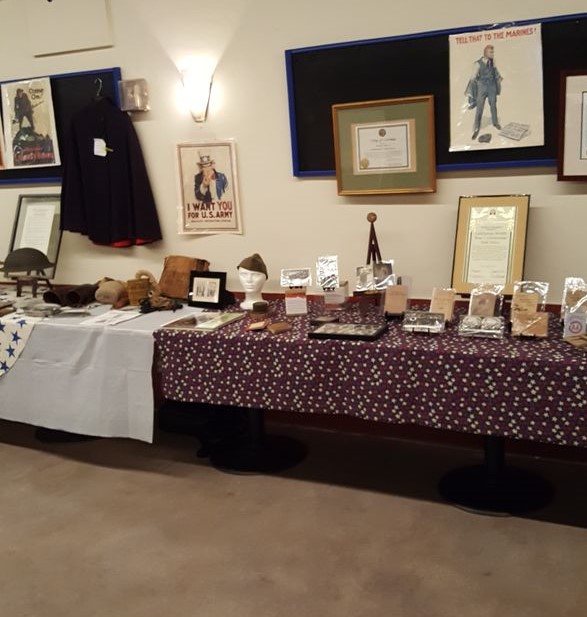 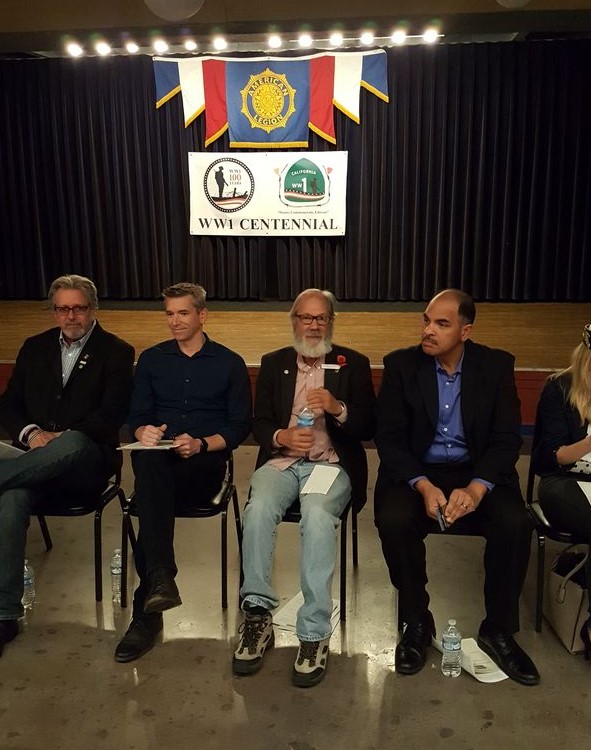 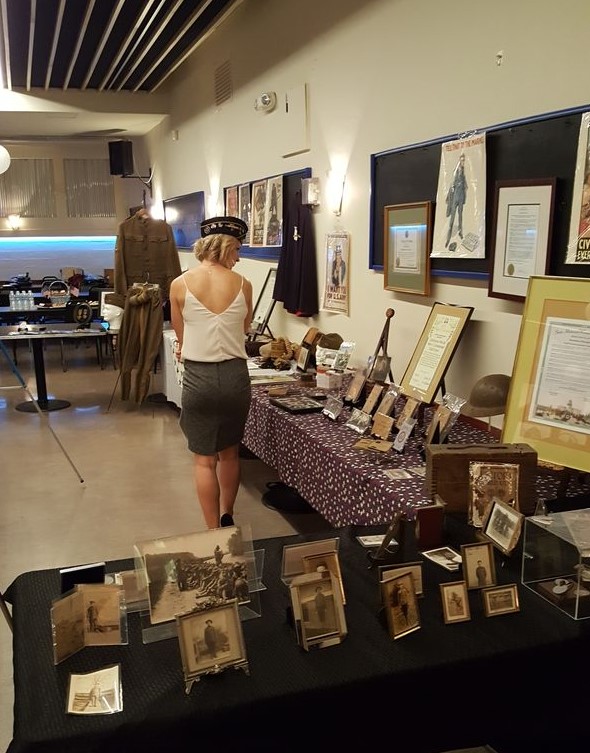 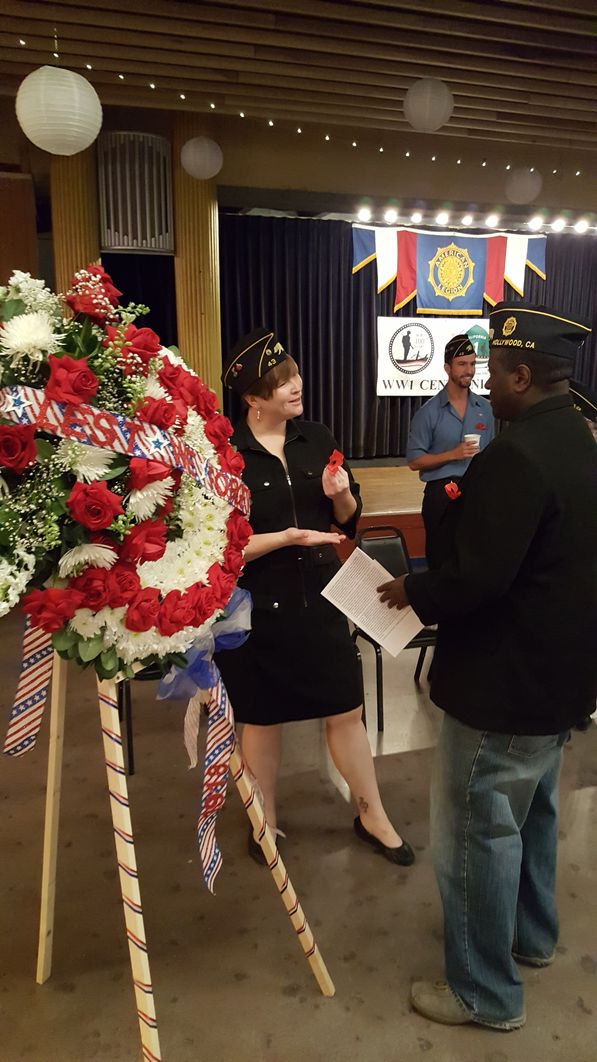 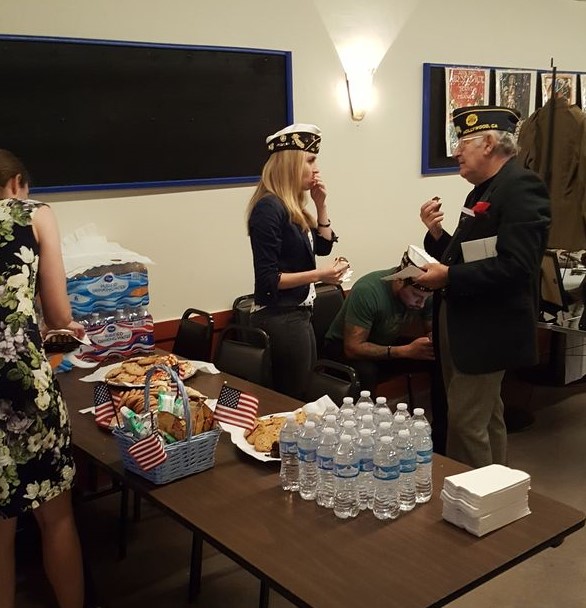 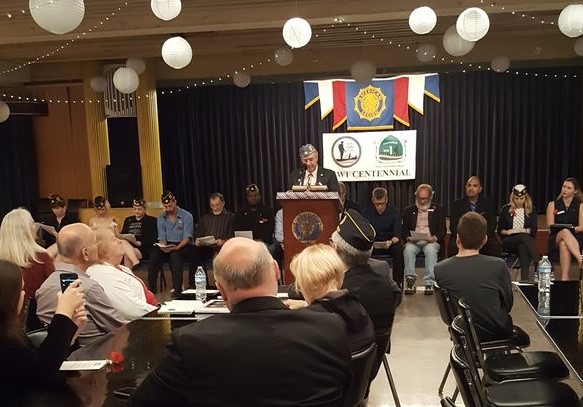 Task Force Co-Director Bill Betten delivers a quote to the audience. The commemoration was held in the downstairs assembly hall of the post's historic building. 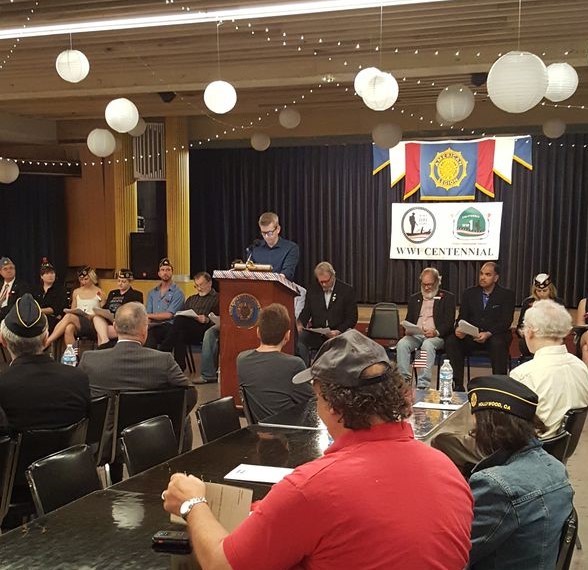 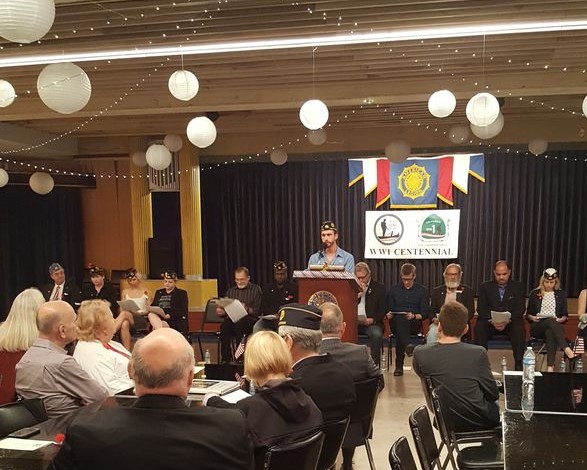 Buddy Watson reads for the audience. 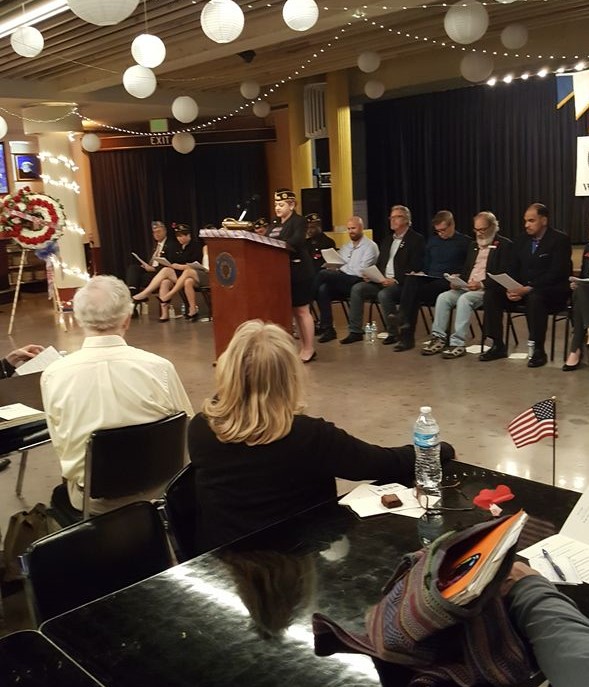 Above: Speaker Danielle Baker.At left: Jeff Daly stepped up next with his oral interpretation.

Below: Al Naipo addresses the audience. 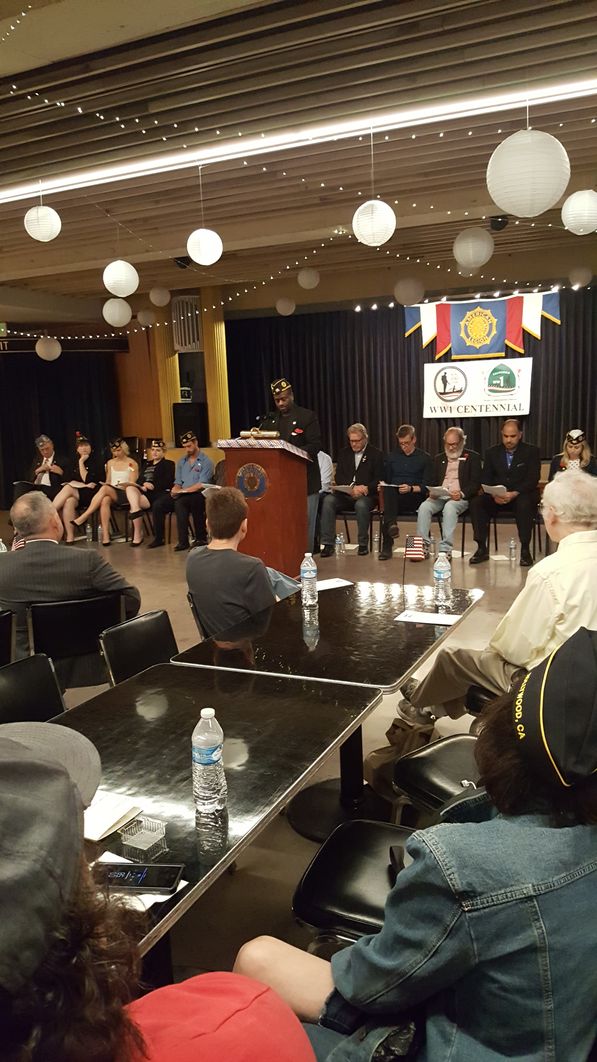 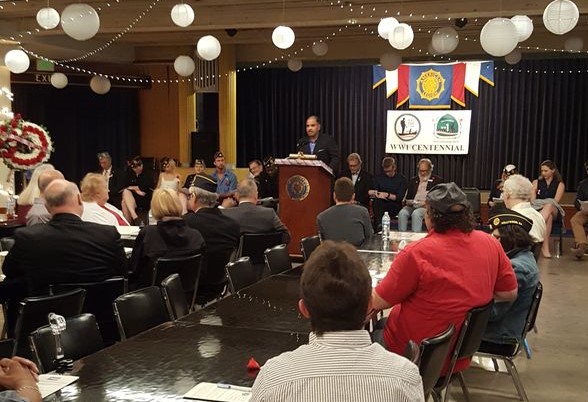