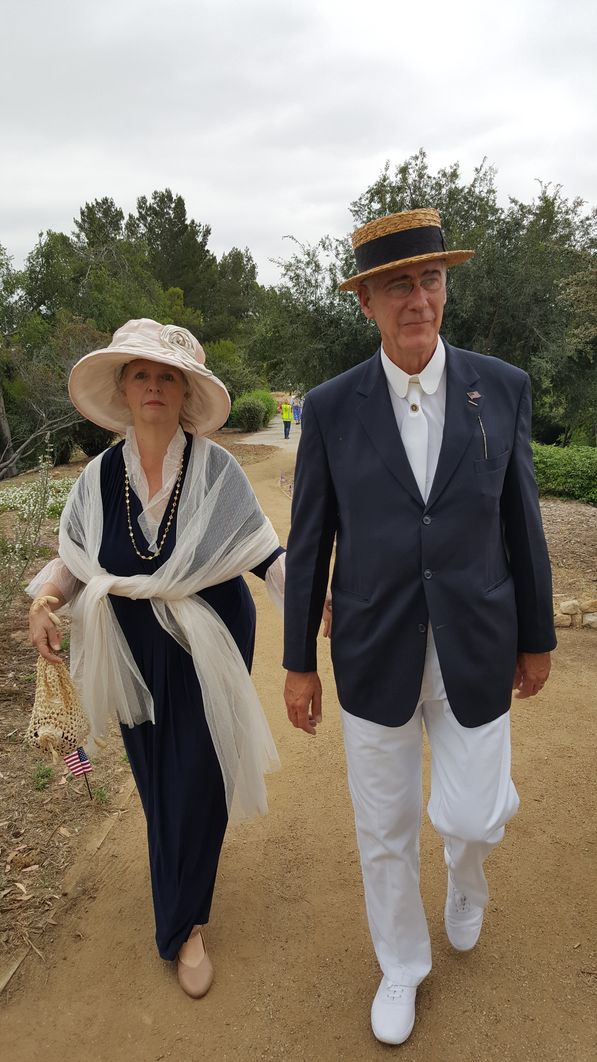 If one had taken a short hike on Flag Day in Elysian Park in Los Angeles on the one hundredth anniversary of the dedication of the park and passed by the World War One monument there, your heart surely would have taken a patriotic beat at what you witnessed. A proud display by a striking color-guard, a moving rendition of our National Anthem, and heroic tales of bravery in the field all added to the remarkable feeling of dignity and gratification at being an American. This would have been enough, but the moment you met the tall and lanky president of the United States in his signature dashing outfit of navy blue sport coat and white tie, white slacks, white shoes, and white celluloid collar, topped off with a 1920's style straw skimmer, strolling up the path with his wife Edith in arm, one was struck with the added emotion of nostalgic serendipity. 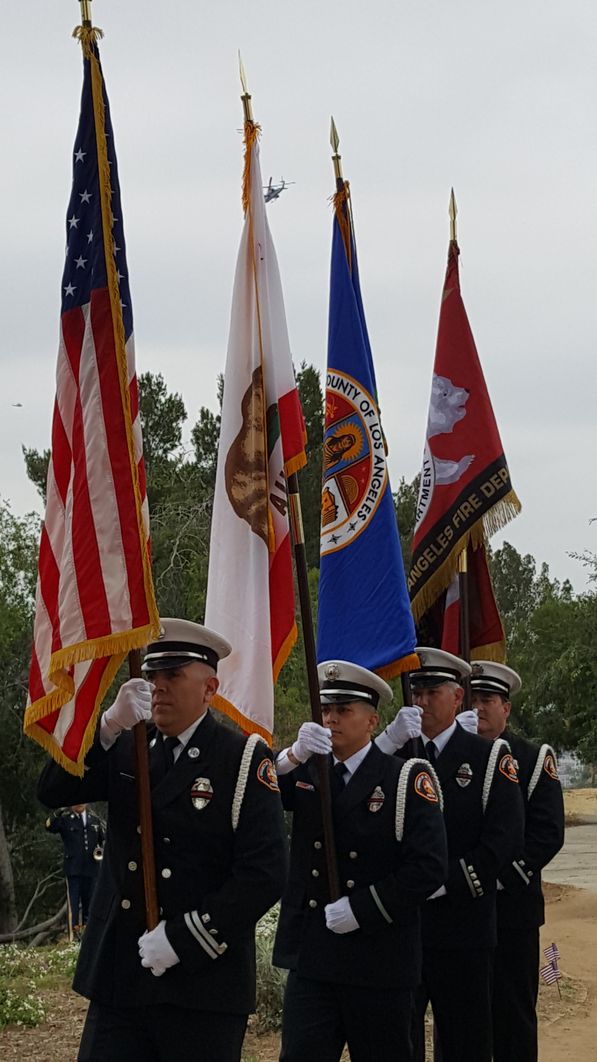 As one of the Co-Directors of the California WW1 Centennial Task Force, I felt honored to be invited by fellow Co-Director Courtland Jindra, but our importance was clearly overshadowed by the attendance of dignitaries, such as Consul Generals, post commanders, and a Los Angeles City Council Member. 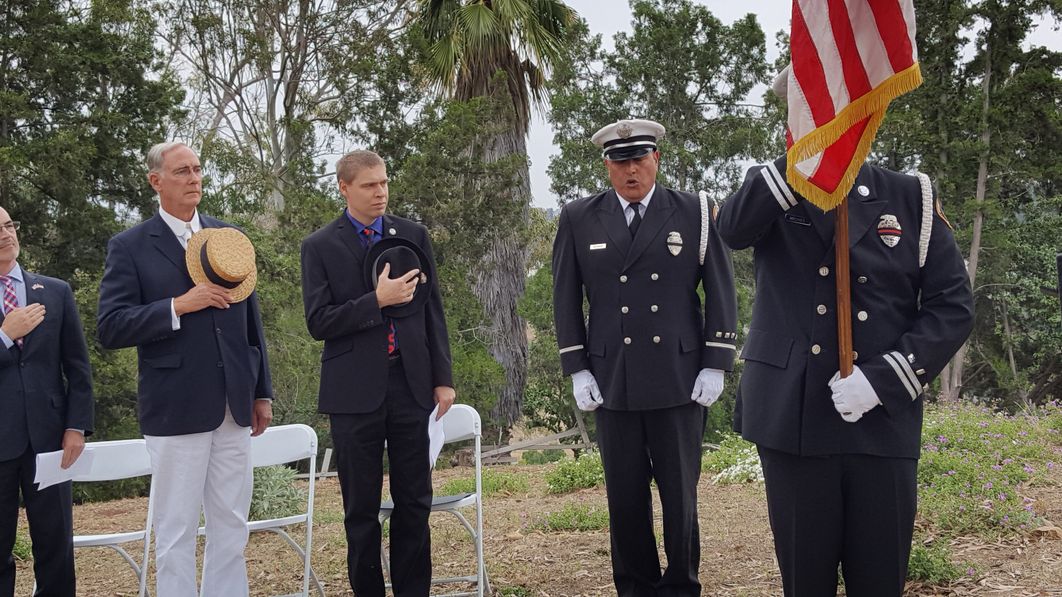 The morning remained overcast as the program proceeded, which made for fine weather for sitting outside without shade. The attendees remained comfortable and attentive.

The Los Angeles County Fire Department Honor Guard was asked to present the colors, which they did with distinction and proper decorum, but the rendition of The Star Spangled Banner sung by their baritone, Humberto Agurica, was flawless and emotion-filled, while still being gratifyingly seasoned with just enough respectful coloratura to give the piece an individual flare. His wonderful voice expressed a true patriotic elan that drifted through the grove and surely brought residents in their yards nearby to their feet. 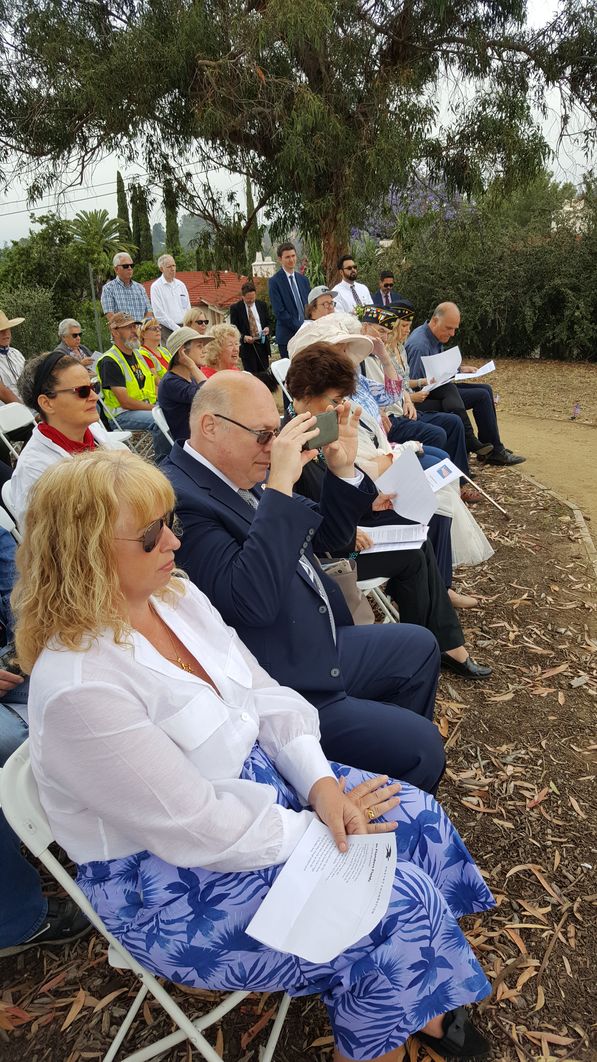 Dignitaries sit in the front row of the audience and attends to the President's words. 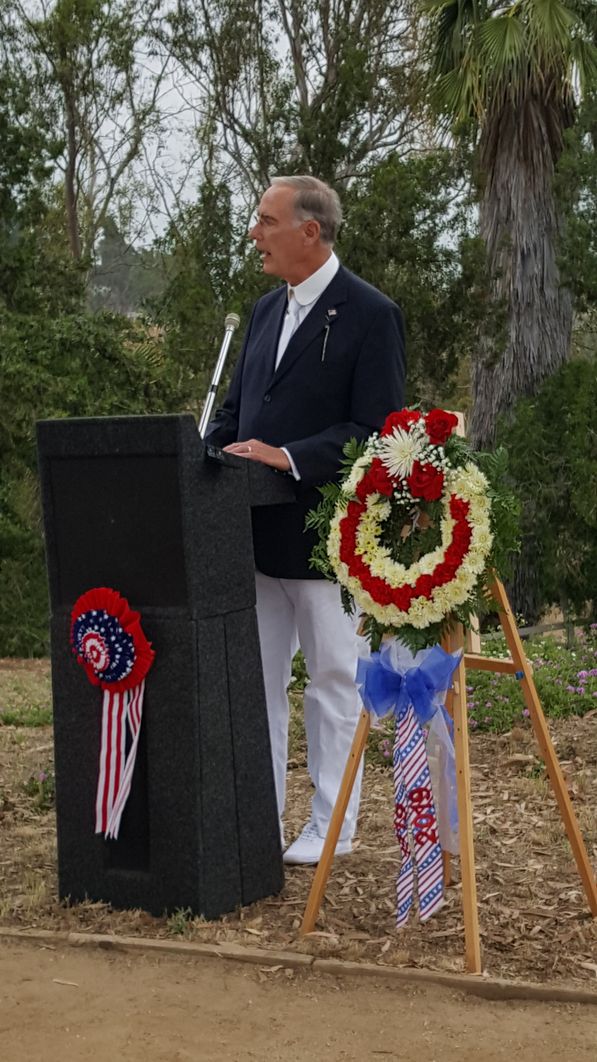 Robert Tidwell as President Woodrow Wilson, speaks the Chief Executive's words from one hundred years ago.

All then took their seats and were welcomed by Courtland Jindra who, acting as Master of Ceremonies, introduced  the first guest speaker.

Few commemorations of this manner are blessed with the presence of striking personalities, but when President Woodrow Wilson himself, took the lectern he heartily received the plaudits of the audience. The president, recreated by Robert Tidwell, presented excerpts from his July 4th speech of 1914 and June 14th proclamation of 1916, where he first proposed and proclaimed the initiation of Flag Day. 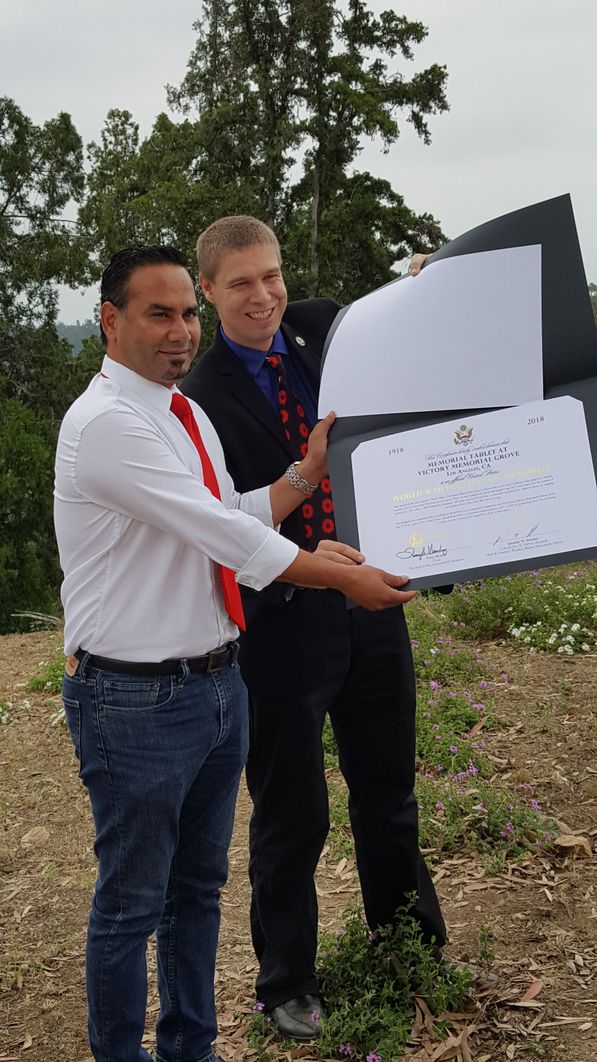 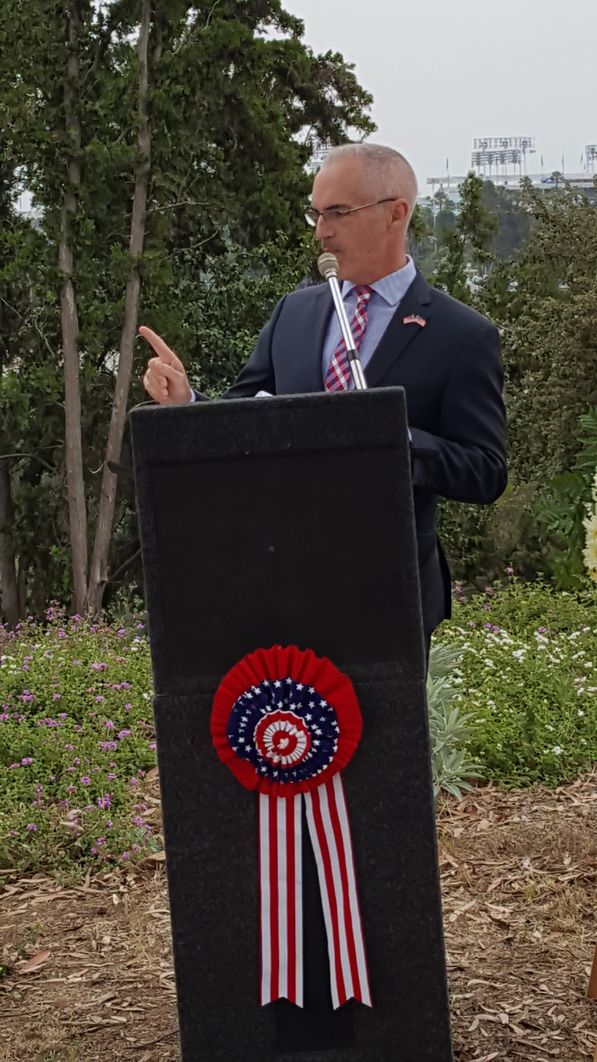 Recognitions and presentations were made to the Los Angeles Department of Recreation and Parks, while later City Council Member Mitch O'Farrell, of District 13, gave a rousing and informative presentation to those in attendance.

Tom Ohmer, Historical Narator, introduced the narratives that lay out the background of the monument and Jennifer Campbell, Commander of Hollywood American Legion Post 43, Phillip Murphy, Co-President of the Citizens Committee to Save Elysian Park, and Gay Storm of the Los Angeles-Eschscholtzia Daughters of the American Revolution read excerpts from dedication resolutions, LA times articles, and the dedicatory address from one hundred years ago. 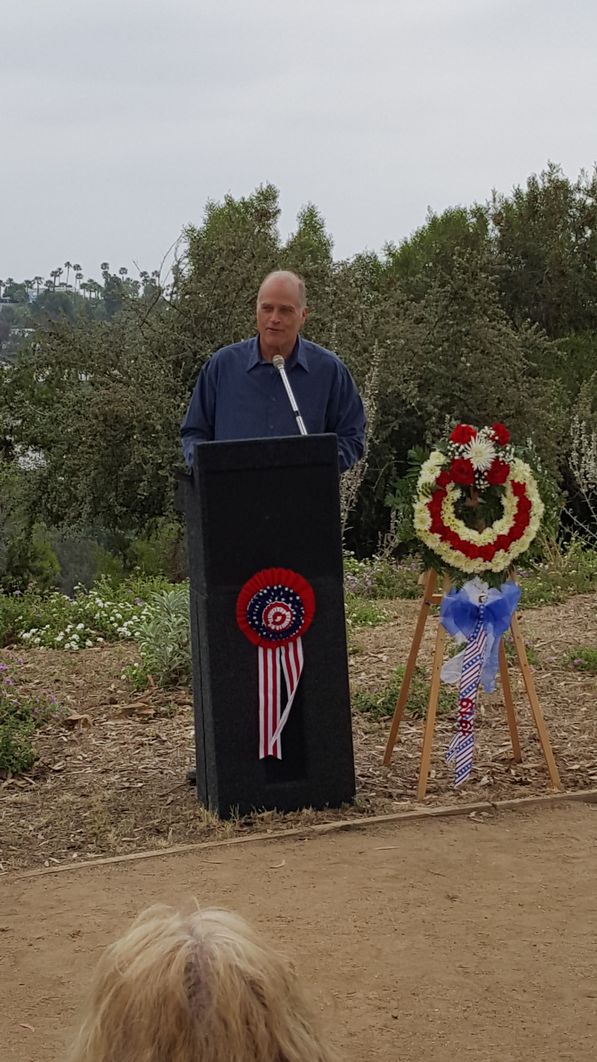 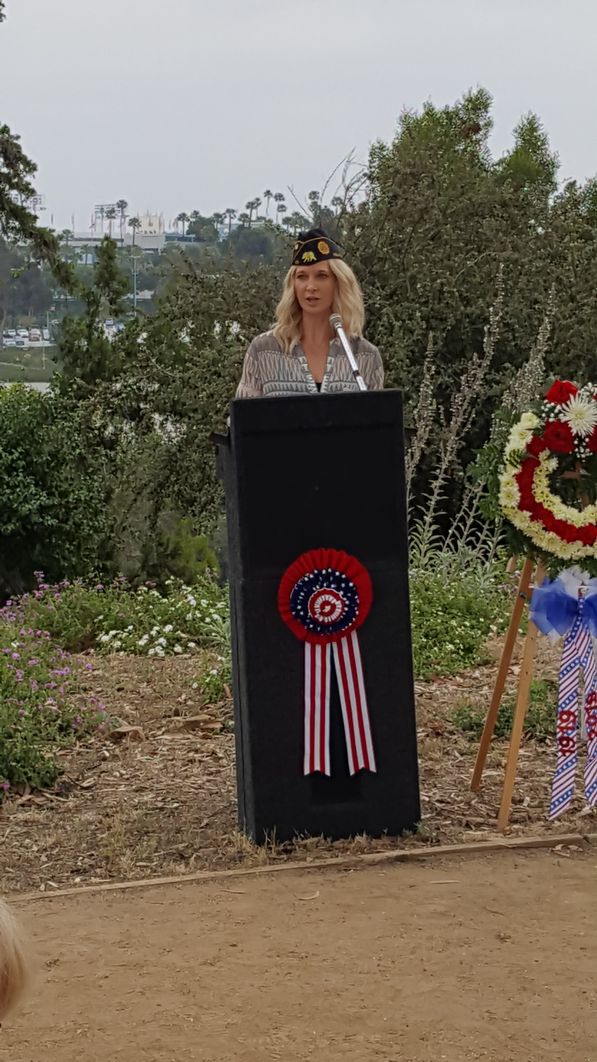 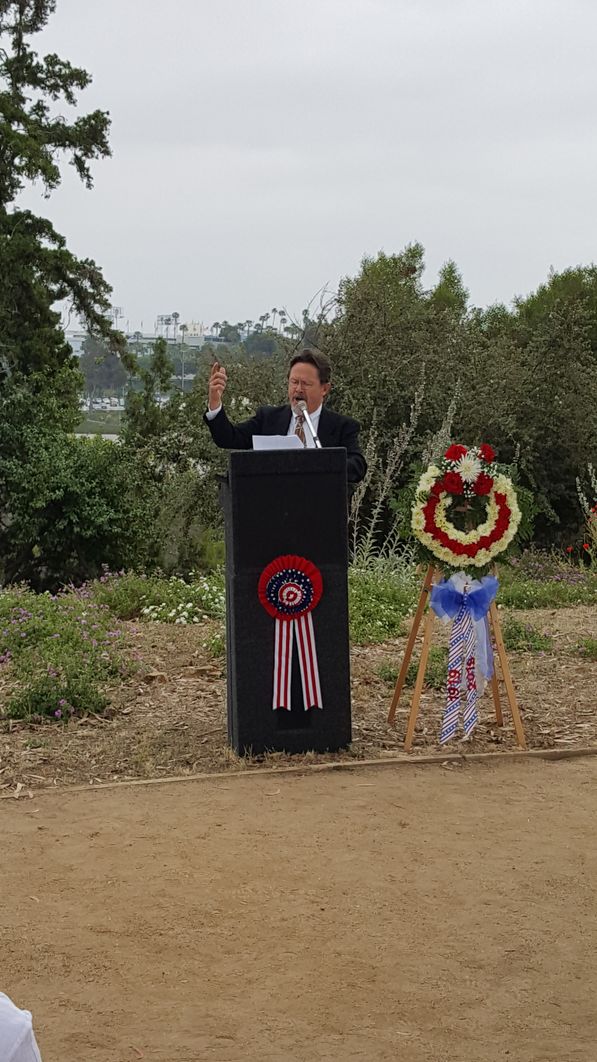 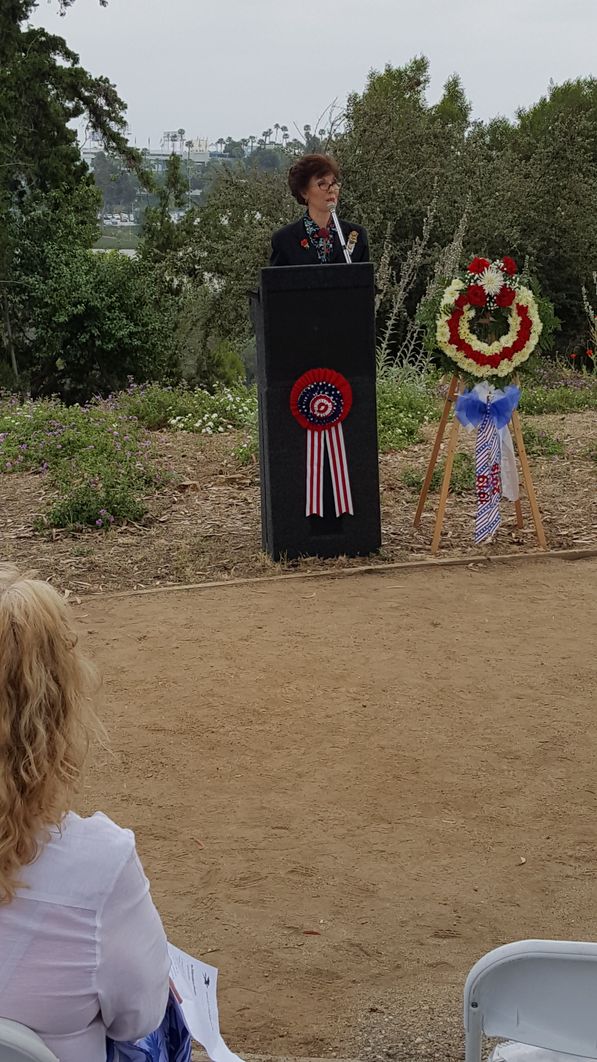 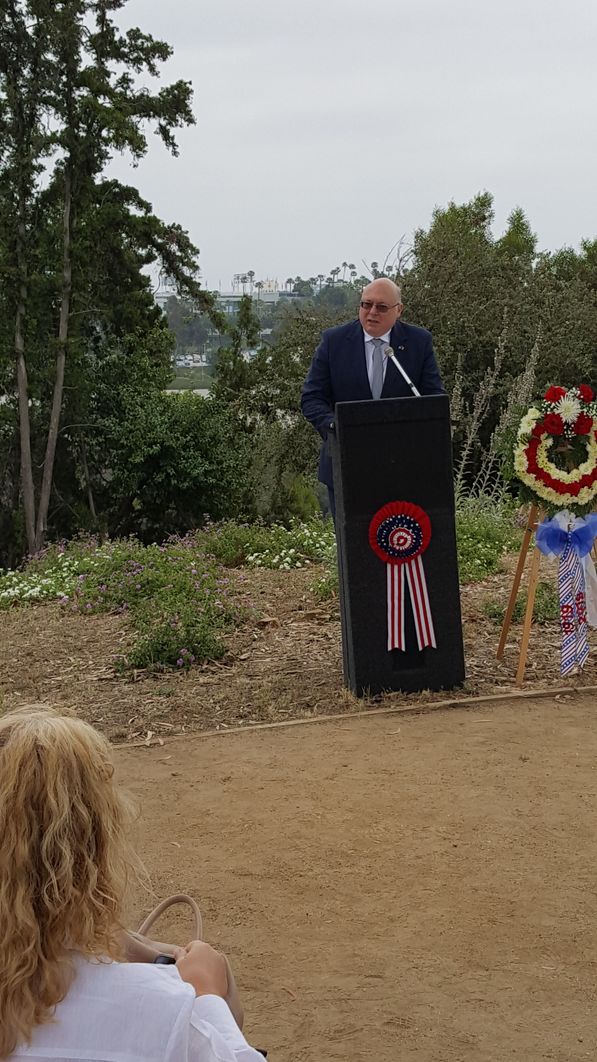 In a unique oration, the Belgian Consul General, Henri Vantieghem, read from a recently published book by Stefan Hertmans. In War and Turpentine the Flemish author relates the experiences of his own grandfather during WW1. The presentation was exceptional in that Mr. Vantieghem read the words in their original language, while the audience could read along in English. Rarely does one get the opportunity to hear such a creative work as this performed in the power, sonance, and rhythm of its native tongue, while also understanding its meaning.

I personally was moved by the Consul General's words of encouragement after his reading. My brief synopsis here cannot hope to encompass the thoughts and emotions expressed by Consul General Henri Vantieghem, but he was adamant to articulate gratitude to the Americans for the part they played, and the sacrifices made in the recovery of his nation in both WW1 and WW2. He also included that America is a great nation of people who should never forget the pivotal roll the United States played in Europe. In speaking to 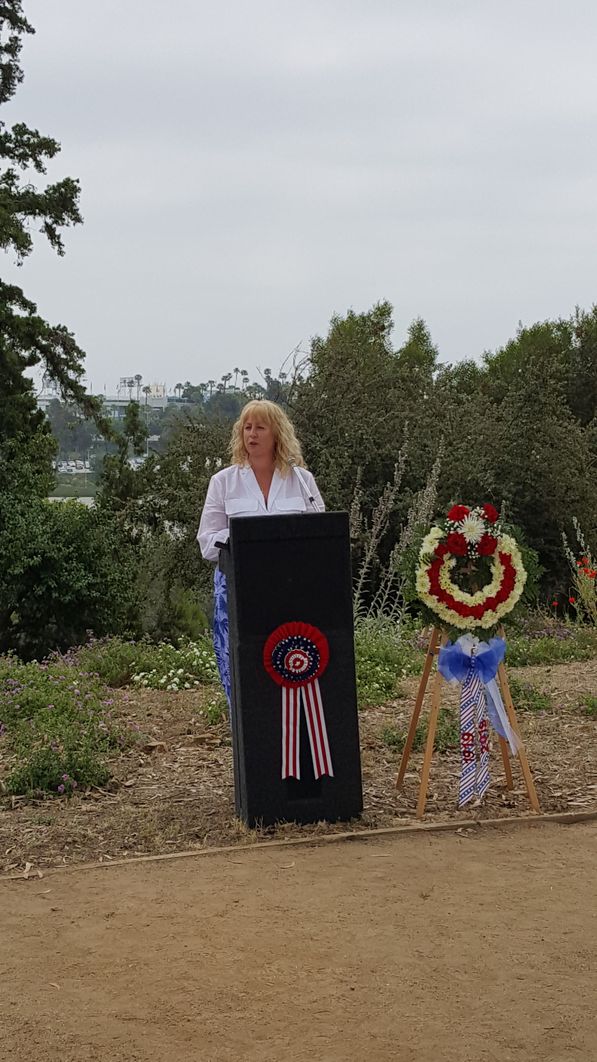 Canadian Consul & Senior Trade Commissioner Patricia Elliotthim afterward he looked into my eyes, and with deep sincerity asked that Americans realize this, and also realize that all of Europe relies upon America, just as America depends upon Europe. He articulated that we are a world brotherhood, reliant upon the success of each other. He said that Americans must remember how thankful Belgium was and is. 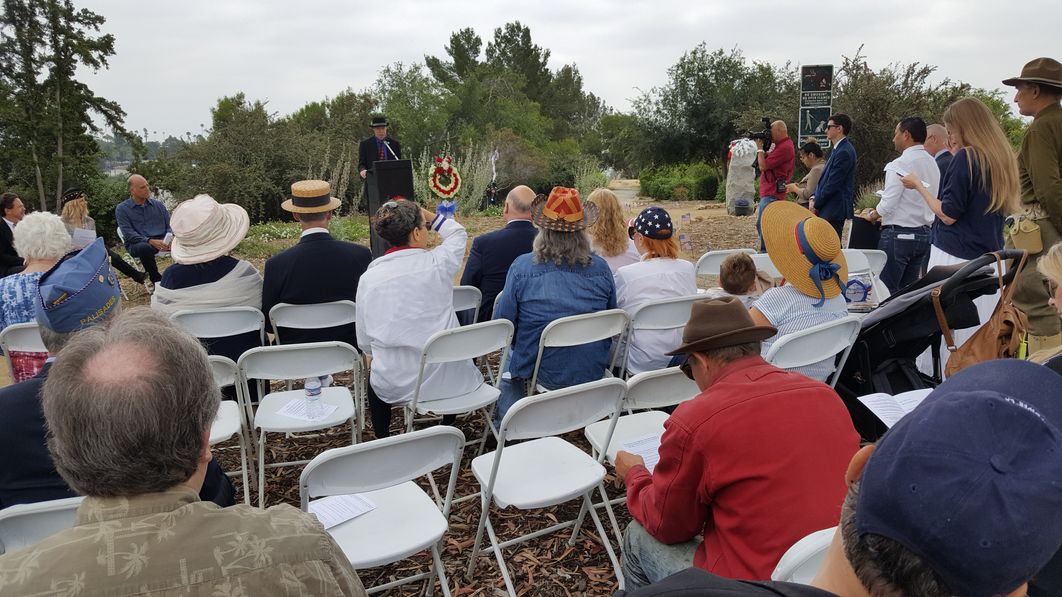 California World War 1 Centennial Task Force Co-Director Courtland Jindra introduces the Belgian Consul General and the Canadian Consul to the audience.No commemoration of WW1 seems complete without a reading of the very famous poem written early in the war by a Canadian major who eventually would die in France in service to his sovereign during the war. Thus, it was only fitting that Patricia Elliott, Consul and Senior Trade Commissioner from the office of the Consulate General of Canada, was asked to read "In Flanders Fields" by John McCrae. 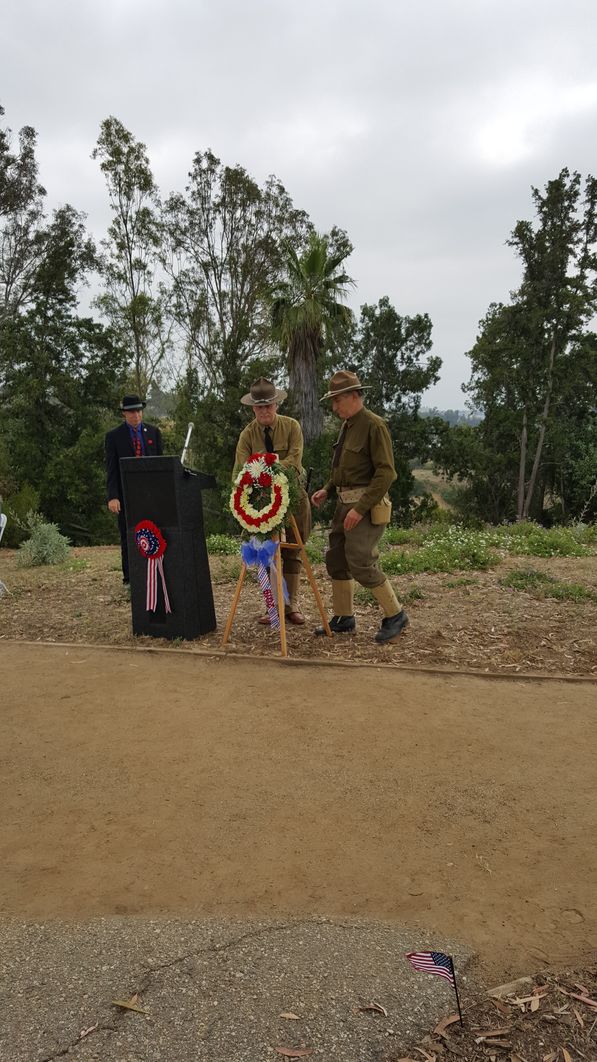 The culmination of the ceremonies came when two 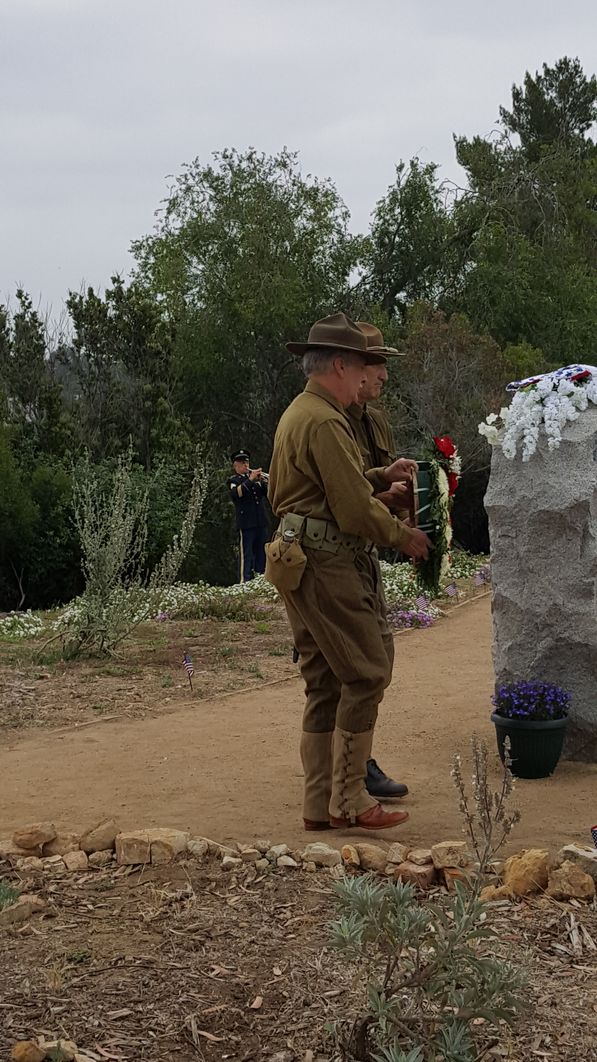 American Doughboy re-enactors placed the red, white, and blue commemoration wreath at the foot of the Victory Memorial Grove monument, which had so recently been restored and rededicated. In the distance a lone bugler rendered forth the haunting tones of Taps. As the notes passed through the trees it made me wonder how many times in the past they had been played here and how often had mothers shed tears on this mount for lost sons.

The team of volunteers has done an awesome job in restoring and revitalizing this monument. All should be proud, Los Angeles should be thankful. 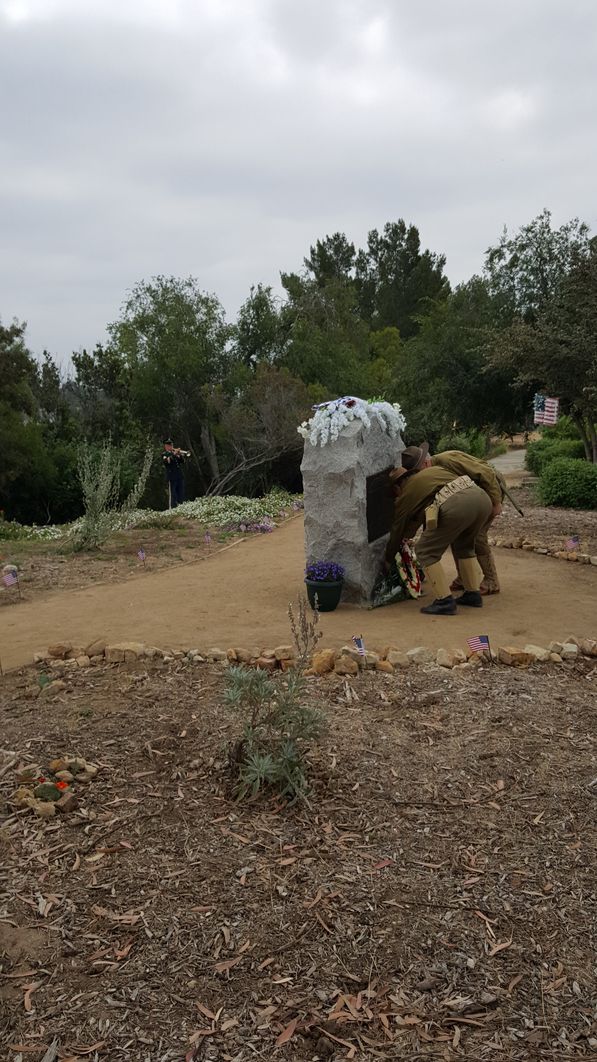 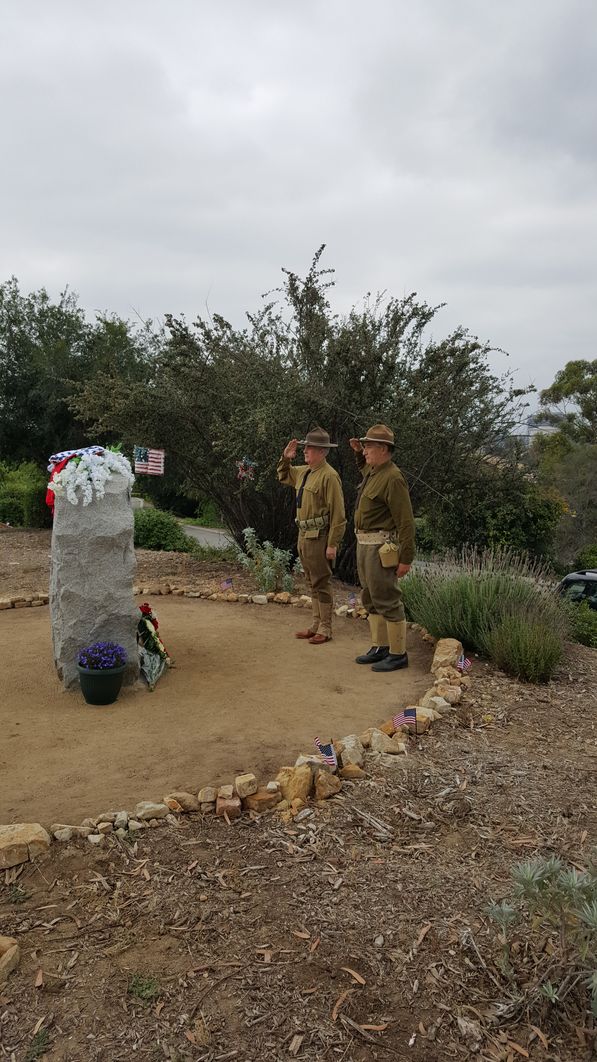 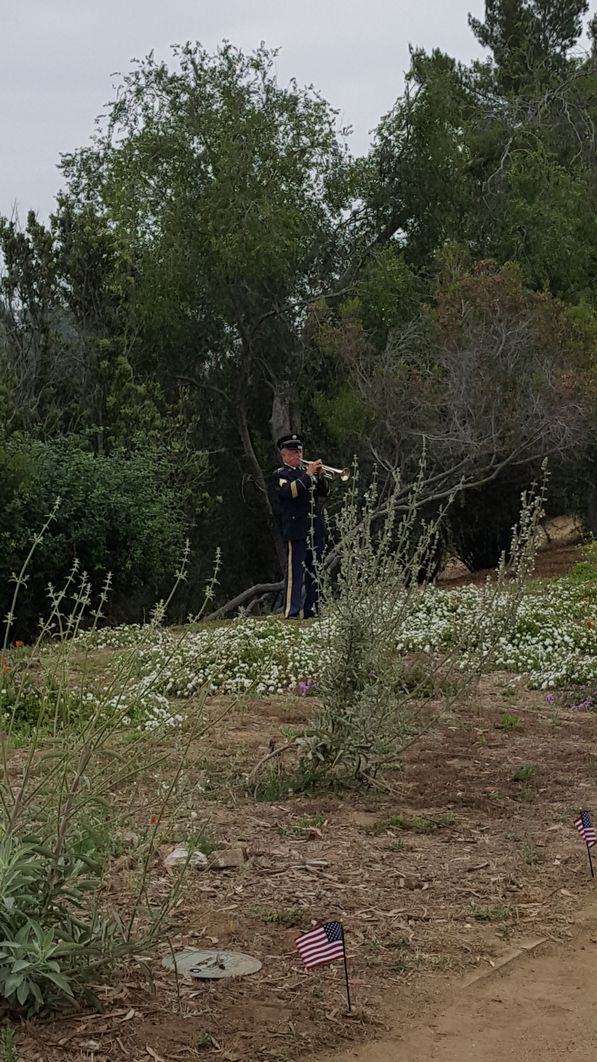 Afterward, everyone commented on the success of the event while cookies, brownies, and cakes were available. These delighted our two-year-old grandson Wyatt, and soon garnered him his grandmother's admonition, still, a fine time was enjoyed by all who attended. Co-Director Courtland Jindra should be proud of his efforts and the praise he so richly deserves for the day's proceedings. 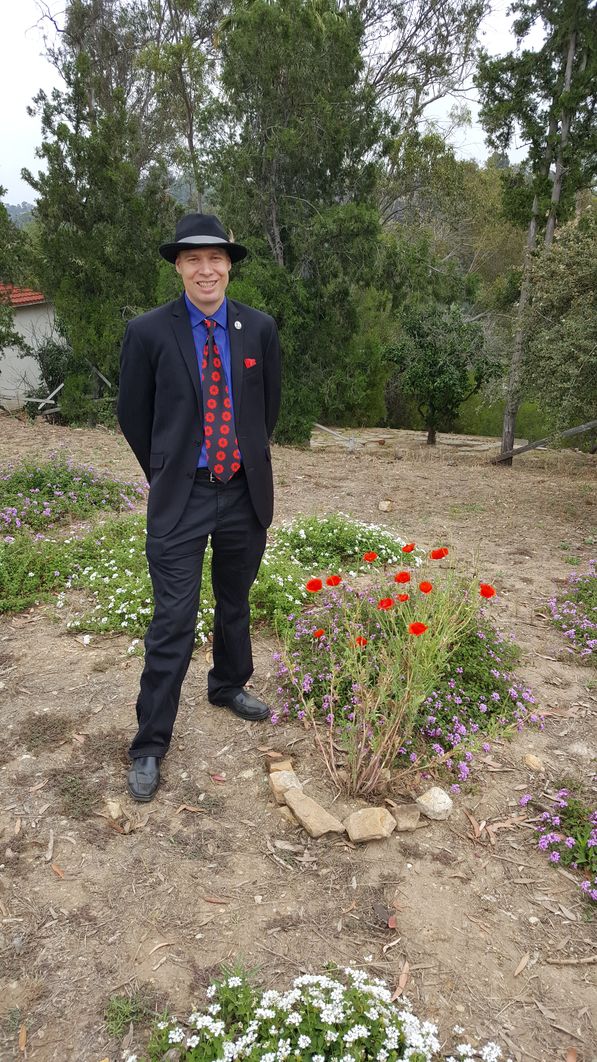 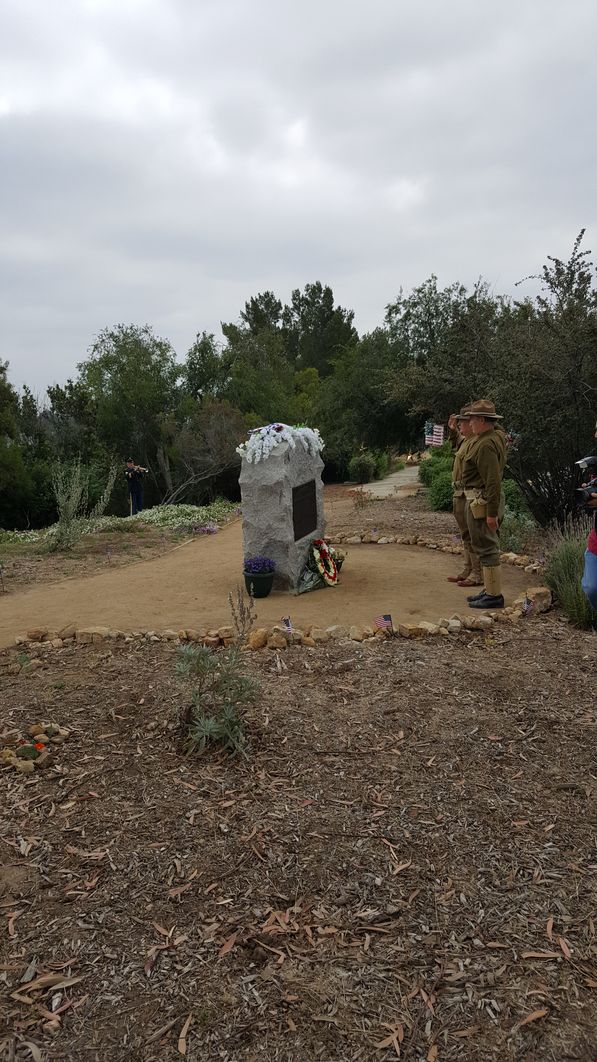 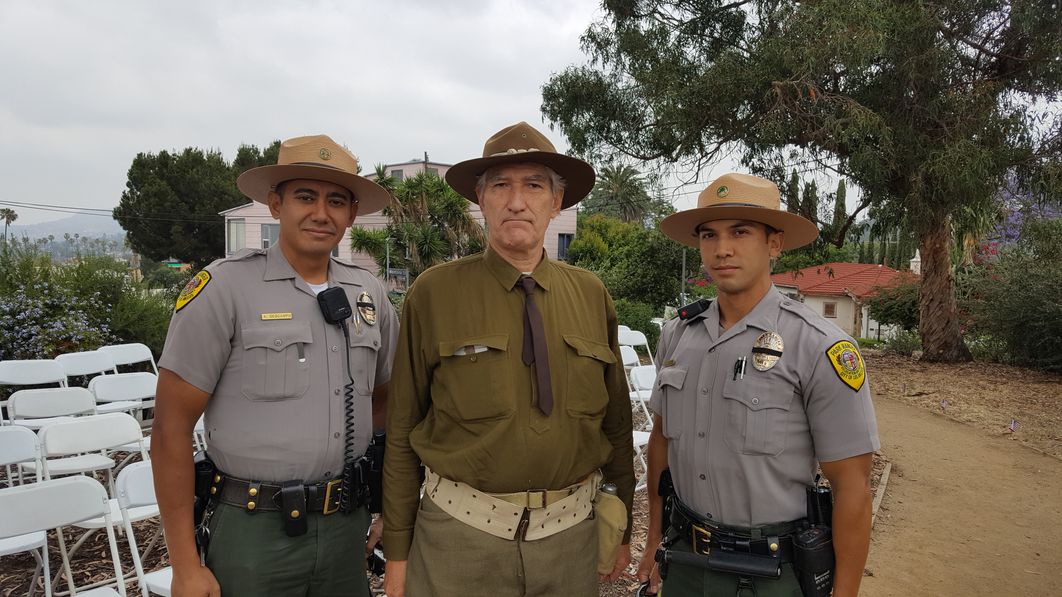 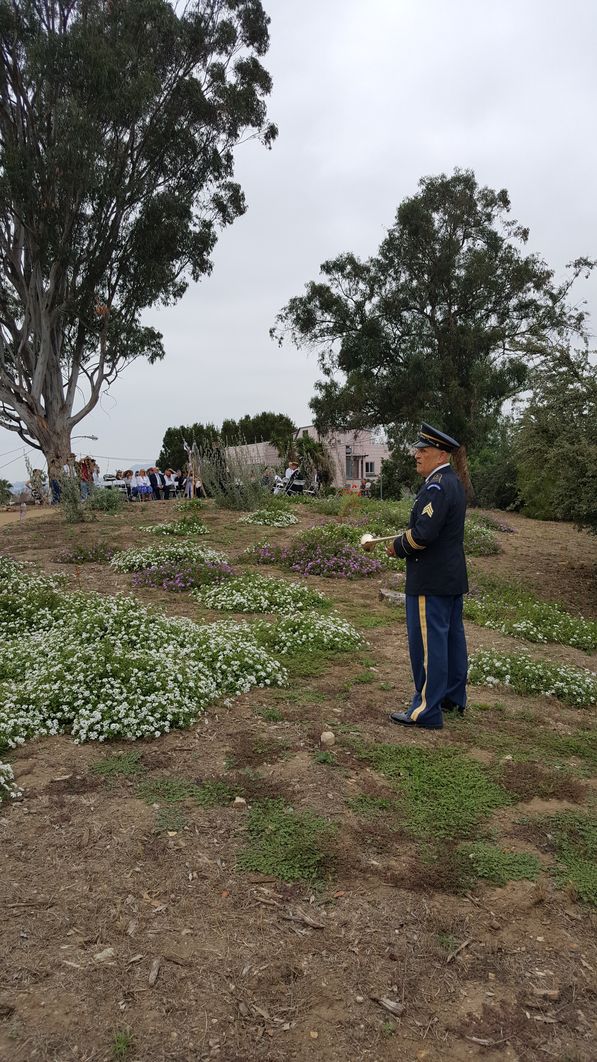 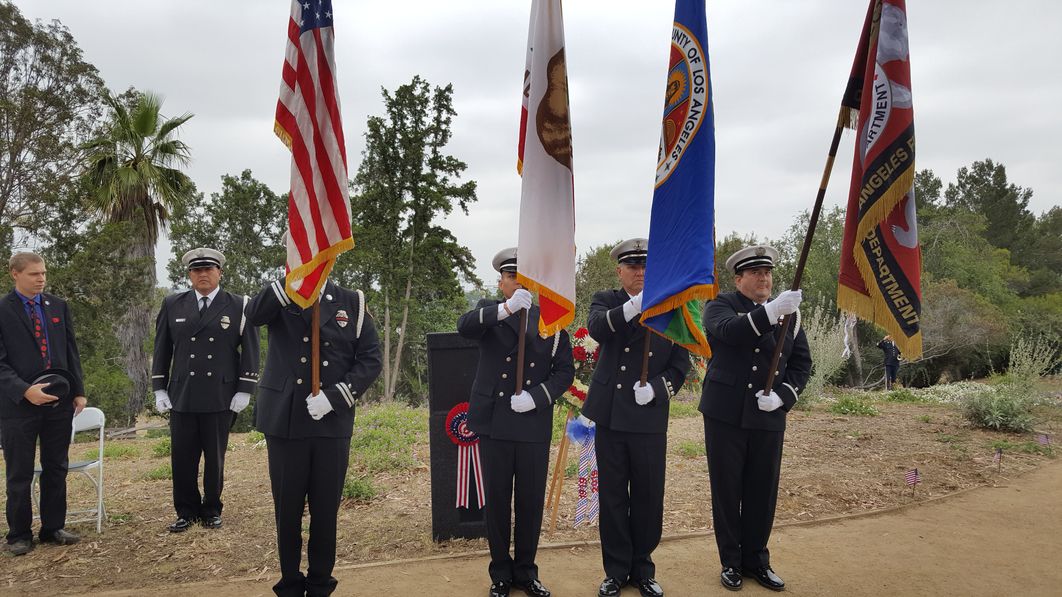