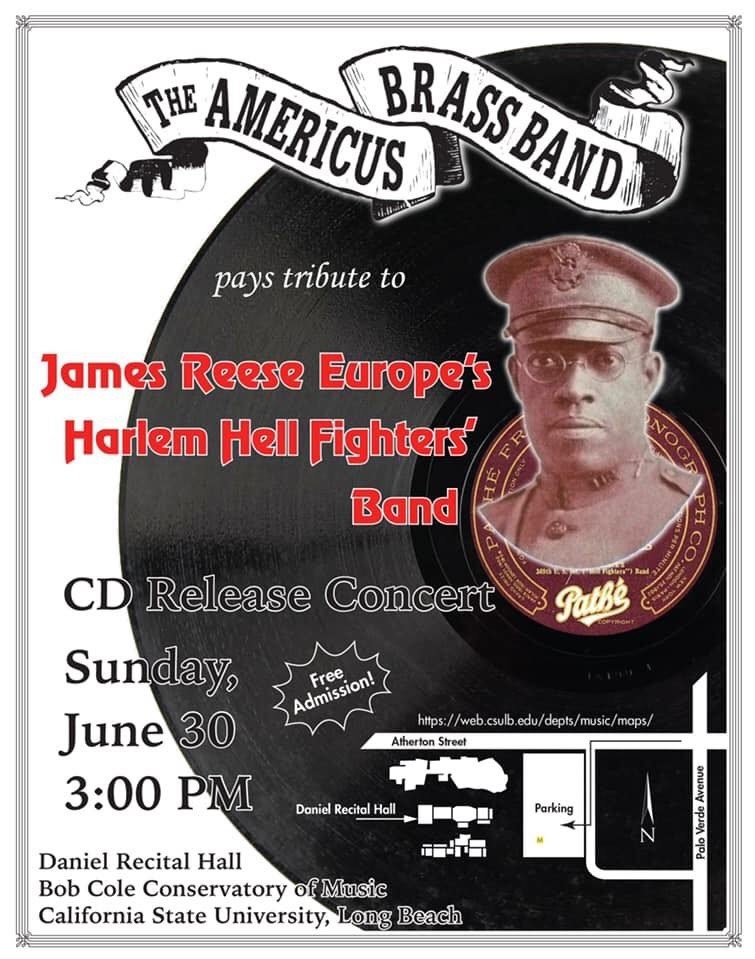 on the 100th Anniversary of the Pathé Recordings

Unless you were given special invitation to attend the latest "CD release concert" of the The Americus Brass Band you might have missed a truly rare and exceptional treat.

The Americus Brass Band onstage at the premier release of their new CD. Of course, the concert was a magnet to folks like me who are one of those attentive patrons of early jazz formation who crave such fine performances. Still, the Americus Brass Band's exciting work on the music of World War One era master, James Reese Europe, should have been heard by all. (Fortunately, it still can. See below.) 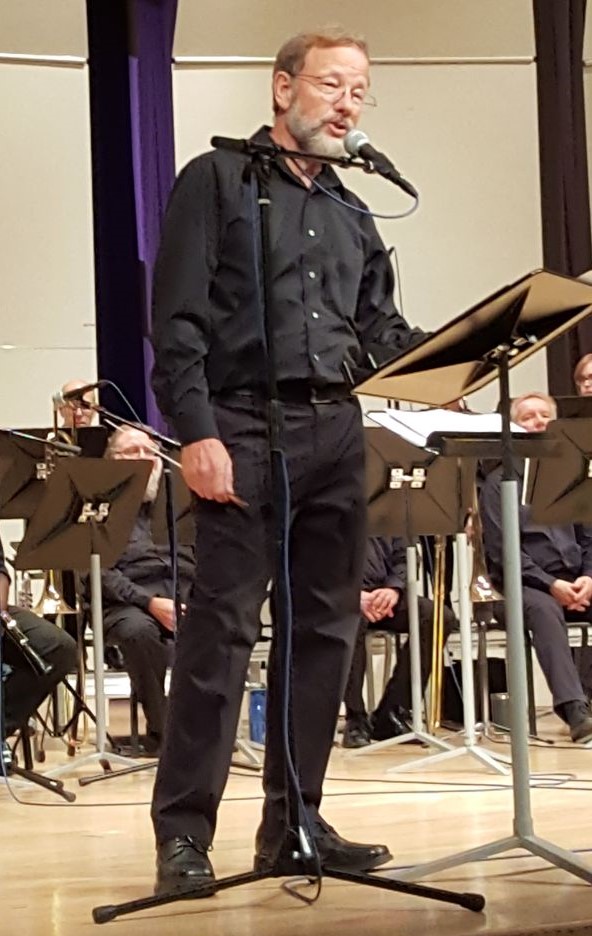 Americus Brass Band Director, Dr. Richard Birkemeier, welcomes the audience.As a band conductor myself, it is with a critical ear that I assure any listener, "a better concert would be hard to find." Besides being a performance of seldom-matched, top quality musicians, the concert was also unique in the fact that The Americus Brass Band has striven to recreate an authentic James Reese Europe/Harlem Hellfighters Band sound true to that early stage of jazz from which it sprang. But finding original sheet music to work with from one hundred years ago was a challenge that The Americus Brass Band music director, Dr. Richard Birkemeier, had spent years researching. Fortunately, the team also could make use of a limited number of original Jim Europe Band recordings.

More than just a recital introducing their latest album, The Americus Brass Band let the audience experience the closest recreation of the music for which Mr. Europe was world famous. This is significant since recordings made after the turn of the last century are only extant today through what was then the best way to capture sounds, which was using primitive wax recording cylinders or discs. 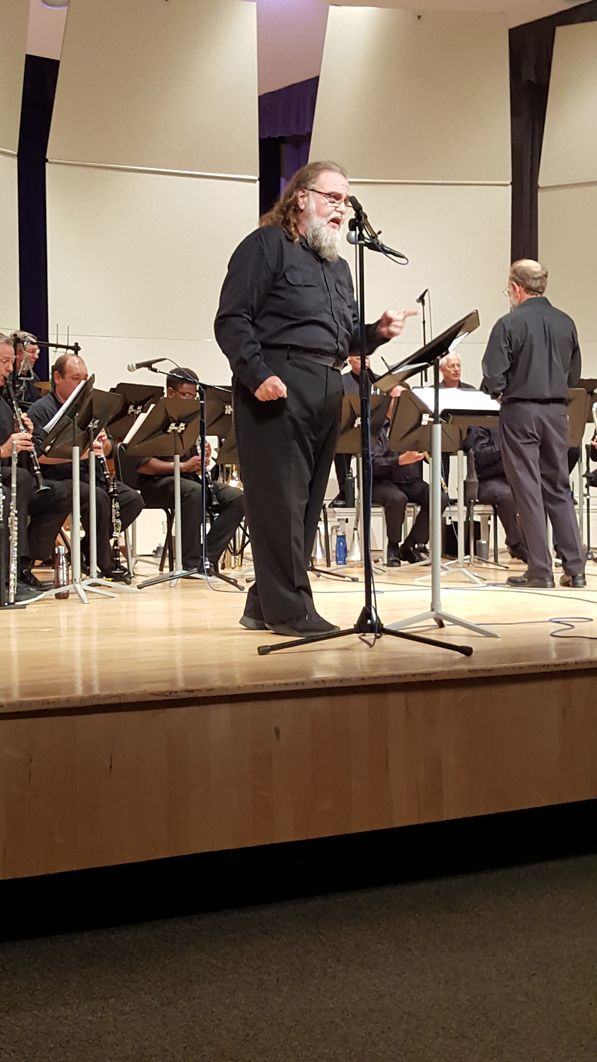 Trombonist and vocalist, Jerry Wheeler questions the audience in song with, "How' ya gonna keep 'em down on the farm after they've seen Paree?"

Instead of employing today's highly receptive stereophonic microphones, the sound back then was collected with the use of a large horn that funneled sound waves toward a thin diaphragm at the funneling horn's small end. To be sure, a restrictive process at best. This means that Dr. Birkemeier, and his musicologists and historians had to combine efforts of sharp listening, historical research reading, and attention to the details and elements of early jazz; and apply these to the printed charts of a century ago.

The result was an astonishing recreation of the unique sound that was James Reese Europe's and his military band during WW1. This, combined with a well-written 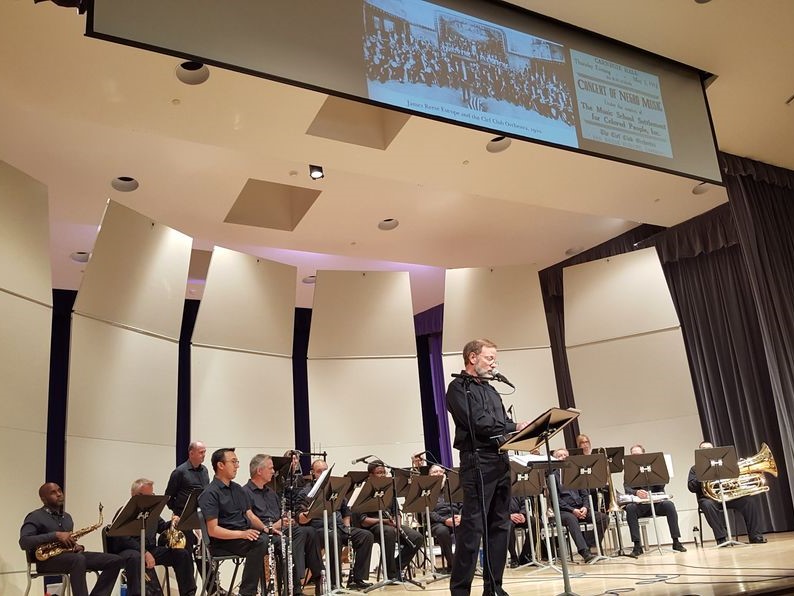 Dr. Birkemeier's historical overheads relate the life of James Europe and how he came to lead a machine gun company during WW1.commentary that Dr. Birkemeier read on the music and life of the first African-American to present an all Black orchestra at Carnegie Hall, made both an educationally well-rounded and entertaining afternoon.

Another treat was that this one hundred-year-old music was being recreated by the use of one-hundred-year old instruments. The band was proud to display and perform on horns constructed during the period. This is even more amazing to me knowing how far the technology of instrument manufacturing has come. Having owned, repaired, and played instruments that old myself I can easily state that it takes a master to keep, and perform on an instrument that old while sounding that well. 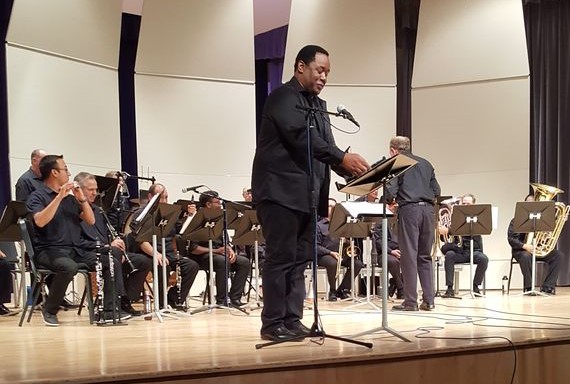 Guest vocalist Selwyn Gibson provides a warm rendition of one of Jim Europe's best known tunes "Good Night Angeline" which Europe wrote with his partners, the famous Noble Sissle and Eubie Blake.The originality of the instruments only added to the authenticity of the event. In fact, after the concert, my wife asked one of the trumpeters, Pat Mullen about the french horn player. Pat was quick to point out that he was actually playing an old E-flat horn equipped with old-fashioned pistons versus modern rotary valves. The Americus Brass Band is incredible in its authenticity.

Like The Americus Brass Band, James Reese Europe strove for an authentic sound, the sound of his race, for numerous reasons, but one of the most important was how it resonated in his people, the people of Harlem. What few fail to understand is that without the creative genius and energy of James Europe, jazz, and hence, the music that followed would have, at best been trammeled, if not seriously handicapped. It could be argued that jazz never would have left Harlem and spread around the world.

It was Europe who dared to reach beyond physical and racial barriers to share his music. It was Jim Europe who introduced high-society to jazz, and it was Jim Europe who capitalized on the vocal talents of the great Eubie Blake and Noble Sissle who went on with Europe's music and stylings to build successful careers for themselves and others after Europe's passing. To represent those golden throats of the James Europe bands of old, The Americus Brass Band utilized the wonderful voices of Selwyn Gibson and Jerry Wheeler.

Mr. Gibson is invited back to the stage again in tribute to James Reese Europe as the band plays a special arrangement of "Amazing Grace" as it might have been played 100 years ago at "Big Jim" Europe's funeral. 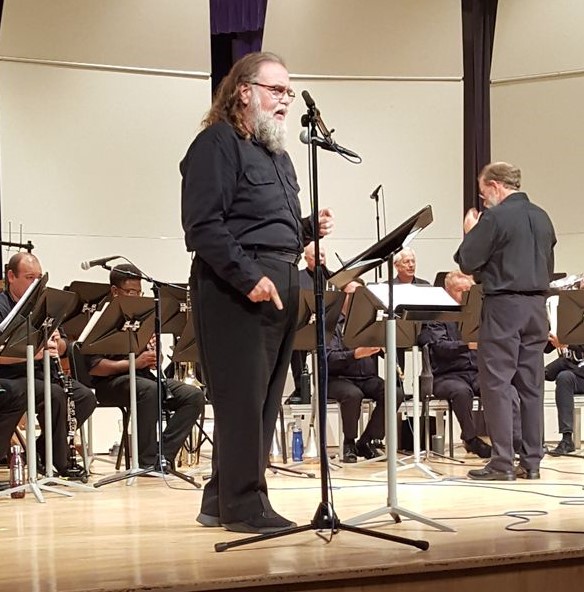 Jerry Wheeler gives a rousing rendition of Jim Europe's own popular creation "On Patrol in No Man's Land" where the band provided all the explosive and battle sounds while the snare drum barked out the machine gun attacks.

It can be hard for us today to understand how difficult it was in Europe's time to get a recording made. The Library of Congress website explains how simplistic and yet difficult it was to make these first recordings: 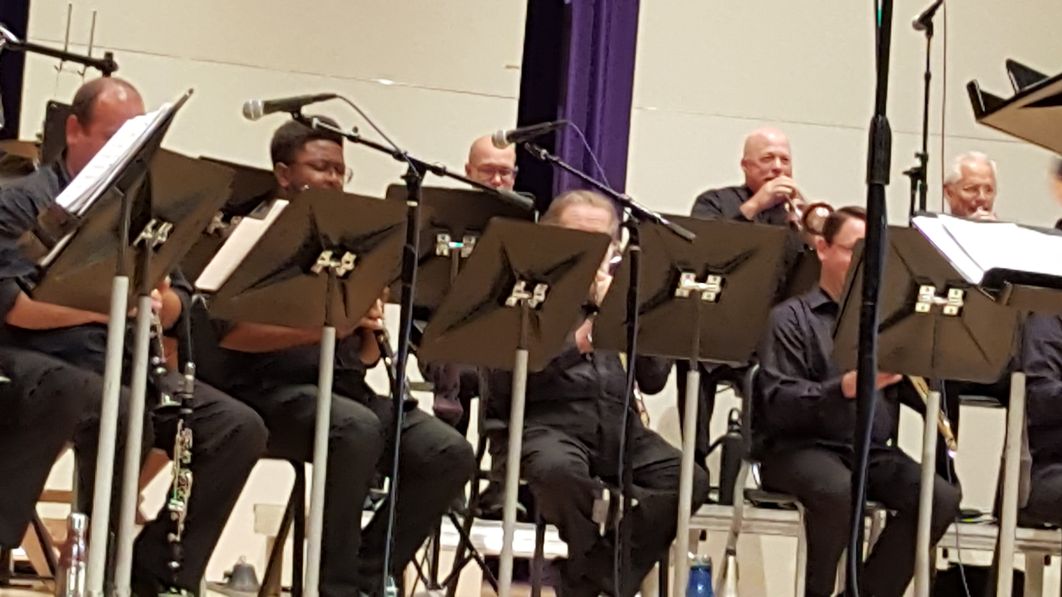 The Americus Brass Band woodwind section exercised mightily the extreme limits of clarinet dexterity, while a part of the cornet section flutters out a jazzy Harlem Hellfighter Band growl behind them."A performer used a great deal of ingenuity to create a successful acoustically recorded performance. The artist manipulated the voice and stance before the horn, moving away from the horn for louder and higher notes to prevent distortion, and moving toward the horn to prevent under-recording soft sounds. Consequently these movements could distort the dynamics intended by the composer of a musical selection."1

Additionally, the number of instruments that the old wax process could capture was limited, so important sounds were replaced with other instruments to be made record-able. Thus Europe's musicians had to adapt, and so did the recorded sound. As Dr. Birkemeier explained, "That is why in certain songs the snare drum was supported by a set of castanets. The technology could not always pick the snare up back then."

But, the fact that Jim Europe and all his men were African-American made recording even more difficult, and it was stunning at the time that Jim Europe had contracted, several times, to have his all-Black bands recorded at all. It is fortunate that he did, for in many cases, the recordings are all that gave The Americus Brass Band scholars a clue as to where the sound should go beyond the rumors.

The Americus Brass Band and its director share the story of James Reese Europe's highly successful, but tragic tale through music and commentary.

I have heard some outstanding re-creative presentations of the pieces performed by Europe's 369th Infantry Harlem Hellfighters' Band, but I consider myself blessed to have been able to attend this concert. As one with a keen interest in Ragtime and Jazz music I can say that this was a historic event in itself that had to be witnessed to be most appreciated, but, as I mentioned earlier, the chance to hear this awesome band is still available. I highly recommend using the link below to acquire your own copy of the Americus Brass Band's tribute to James Reese Europe's Harlem Hellfighter's Band in Compact Disk format.

The recital hall was filled with enthusiastic applause as the audience quickly stood at the end of the program demanding that the band not leave the stage without an encore. Dr. Birkemeier came back on to oblige, but instead of having the band set up a different song, he asked if the audience would like to hear again one of the 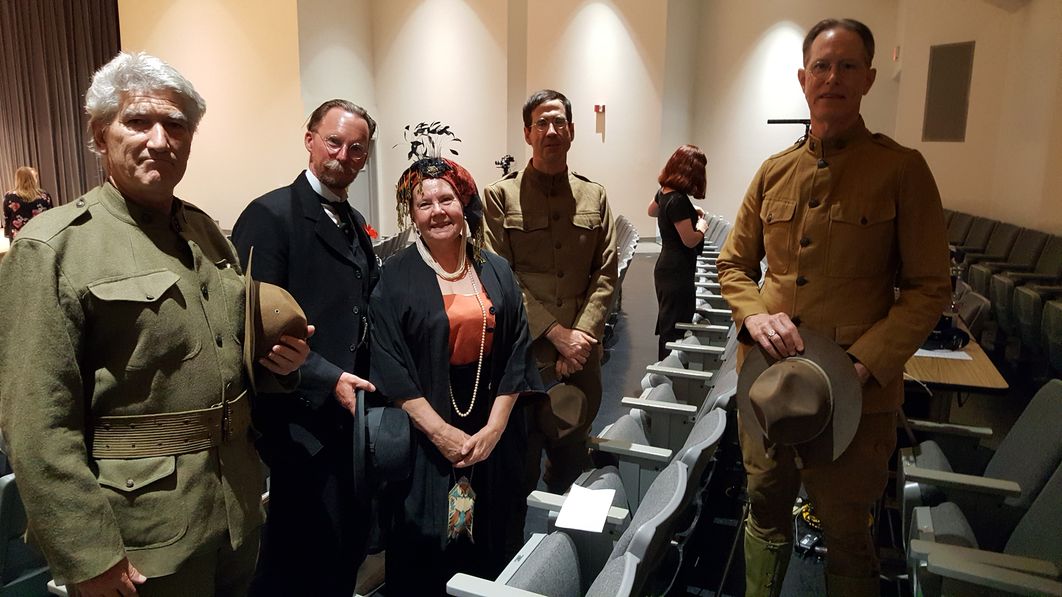 WW1 re-enactors attending the Americus Brass Band concert included from left to right: Philip Dye, Robert Maxwell, Sandra Maxwell, Damian Stellabott, and Cary FarnsworthHarlem Hellfighter's Band favorites, "That Moaning Trombone," except this time he would challenge the musicians to play it at the break-neck speed that James Europe was so often prone to do. The audience cheered with delight and the Americus Brass Band grit its chops and did not dissapoint. What an exiting finish to a wonderful performance. 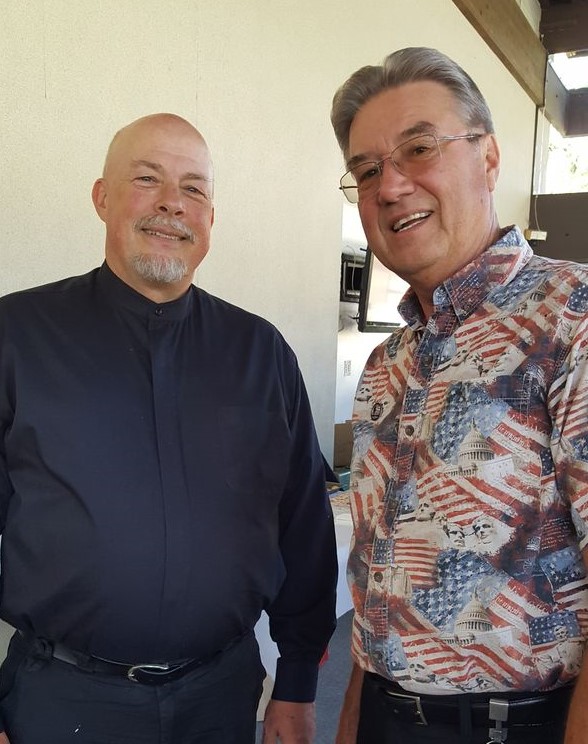 Cornetist Pat Mullen & California WW1 Centennial Task Force Co-Director Bill Betten (also a trumpeter) chat after the concert.After the concert I was fortunate enough to pull aside the very busy Dr. Birkemeier. Though his attention was requested by others, he still took time to speak personally to each one. He was eager to share and was clearly pleased with the concert's outcome, as he should be.

As mentioned before, I spent quite a bit of time asking cornetist and trumpeter Pat Mullen, questions as to the band's make-up. Though the musicians in Americus Brass Band are highest level professionals, Pat informed me that all had donated their time and efforts to make this dream of Dr. Birkemeier's a reality. They all clearly love this project, and the music itself only makes the commitment worth that much more. 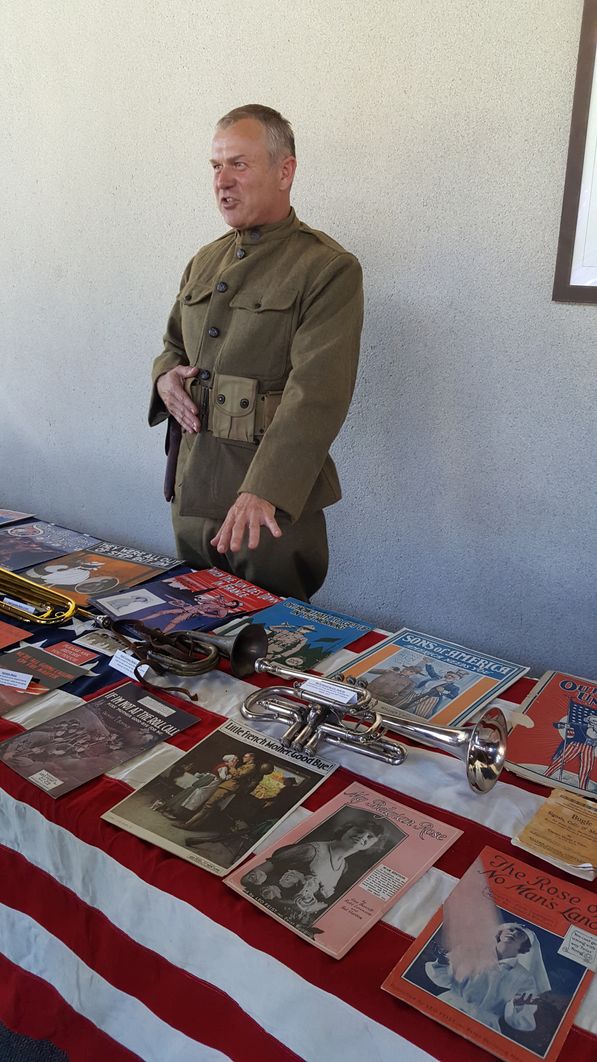 Fred McDowell discusses unique WW1 items displayed on his table, including period cornets and bugles.Pat also introduced me to an alumni of The Americus Brass Band, Fred McDowell, who was on hand to answer questions of all who gathered around his very interesting, and well-stocked, display of World War One artifacts. As a trumpet player who had previously performed with the A.B.B. for Civil War events and other presentations, Fred is very supportive of all the efforts of the band. 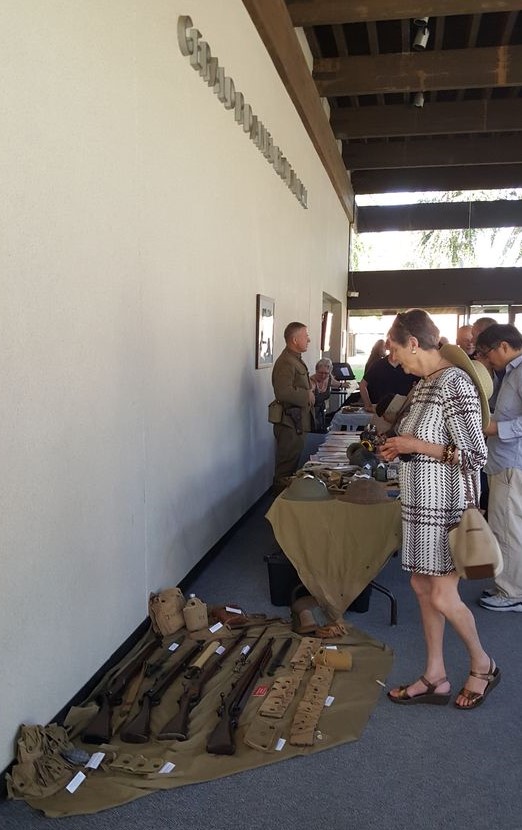 Pat shared that many A.B.B. members have to travel to attend rehearsals and concerts; some even live out of state. Most are busy with a professional music career, so the band will likely only perform this one live tribute to James Reese Europe. Fortunately, The Americus Brass Band does include several of the Europe pieces in their all-encompassing show "Top Brass." The material for that show extends from the mid-1800's to Glenn Miller in WWII.

Pat expressed that though he is most pleased to be a part of the band, he also informed me that Dr. Birkemeier was retiring and would be moving out of state soon. "We'll have to see what direction that takes the band next," he cautiously stated.

Without a doubt, no matter how changes affect the band, if you get the opportunity to hear them live, DO SO! But, even if you can't, no American library of music, personal or public, is complete without The Americus Brass Band pays tribute to James Reese Europe' Harlem Hell Fighters' Band CD. 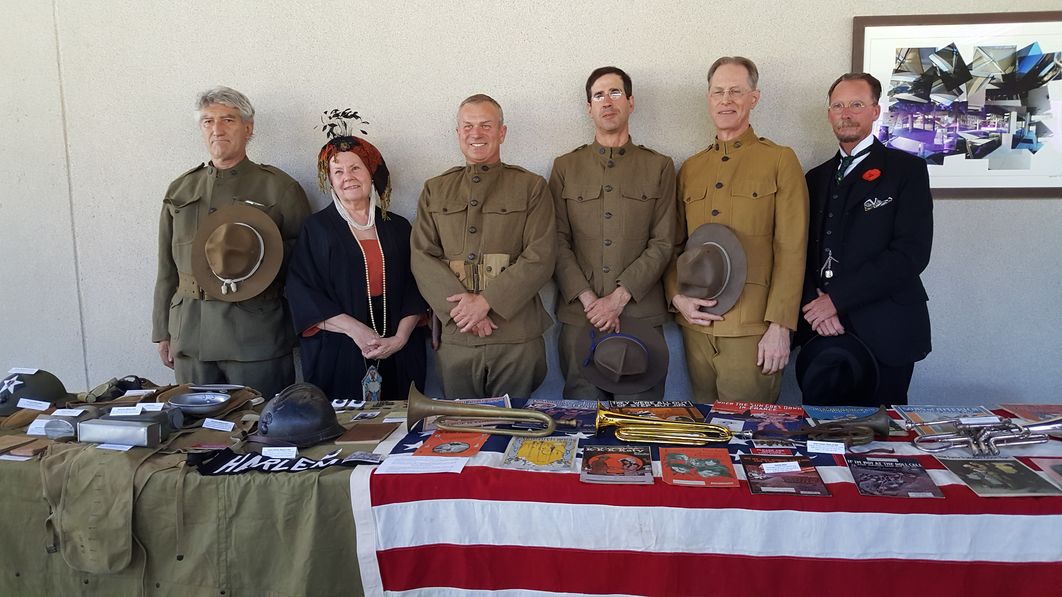 Great War re-enactors gather in the foyer at the display table at the Americus Brass Band concert.

1"About the National Jukebox - Acoustical Recording" The Library of Congress, National Jukebox: accessed July 1, 2019 at  http://www.loc.gov/jukebox/about/acoustical-recording