A Golden Cross to Bear: A Story of the 33rd Division in World War 1 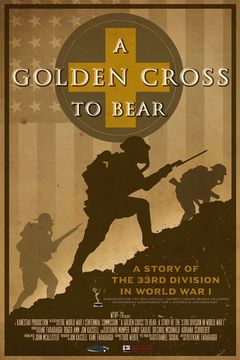 Over two years in the making, A Golden Cross to Bear focuses on the Meuse-Argonne Offensive in France, the bloodiest battle in the history of the United States military. During the forty-seven day struggle more than twenty-six thousand Doughboys were killed in action with nearly 100 thousand wounded. Kane Farabaugh and Jon Kassell decided to make a documentary series about their friend Roger Amm, whose grandfather Gustave had served in the 131st Infantry Regiment, 33rd Division. The trio realized that there were very few documentaries being produced to coincide with the 100th anniversary of World War I. Roger Amm knew very little of his grandfather's service and traveled throughout Illinois and then overseas to France and Germany to learn what he could about The Great War while his two friends recorded the journey. 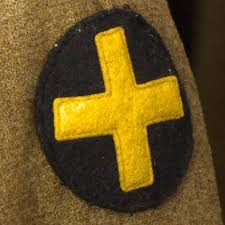 Though the series was officially endorsed by the US World War One Centennial Commission, and local Illinois PBS Station, WTVP, provided assistance, promotion, and technical and broadcast support, the five part series was mostly self funded. Amm and Farabaugh invested about $30,000 of their own money to make this passion project come to life. The program aired Memorial Day weekend of 2018 in the Chicago area and won several awards. However, they hoped a DVD release could really let the story reach a broader audience.

It looked for awhile like they had a sponsor that would help fund making DVDs, unforutnately, that fell through. Farabaugh is a government employee and around the same time the U.S. Government shut down of 2018-2019 forced him go to Indiegogo to crowd source the cost. Believing in the project, I donated a not insignificant sum on behalf of the California World War One Centennial Task Force, and did so without expecting a return. I had hoped my fellow Co-Directors would agree. Later, at a meeting of the Task Force my decision was given their full approval. We were rewarded with our name mentioned in the credits of all five episodes on the DVD issue.

As Farabaugh said in a message at the time to those that helped with the fundraising:

I am personally grateful for your help and assistance, particularly now. It takes a village to produce a documentary series, and I am grateful you have all decided to be a part of this village. Our mission all along as been to ensure that the service and sacrifice of all those who served in World War 1, which includes my own great-grandfather Urban Farabaugh who served in France in the 28th Division, are not forgotten, and we all understand a little bit more about the struggle, sacrifice, and service of those before us.

Officially endorsed by the California WW1 Centennial Task Force, as well as the national U.S. World War 1 Centennial Commission, A Golden Cross to Bear: A Story of the 33rd Division in World War 1, was nominated for five Midwest Emmy© Awards. The series which explored the previously untold story of a U.S. soldier’s front line experience in World War 1 was nominated in five categories including “Outstanding Achievement for a Historical Documentary.”

The first episode of the series “A New Kind of War,” recently won the Chicago/Midwest Emmy for “Outstanding Achievement - Writing, Short Form.” In Chicago, upon receiving the award, Kane Farabaugh stated, “It’s an honor for me to be up here on November 10th, tomorrow is November 11th. The 11th hour of the 11th month on the 11th day of 1918 is when the war was finally over and it’s an honor to be able to accept this Emmy award for those men we profiled in this series.”

The California WW1 Centennial Task Force congratulates Roger Amm and director-producer Kane Farabaugh for their great work and success. I would also personally like to thank Task Force Co-Director Courtland Jindra for his diligent attentiveness, generosity, and initiative in supporting this cinematic effort.