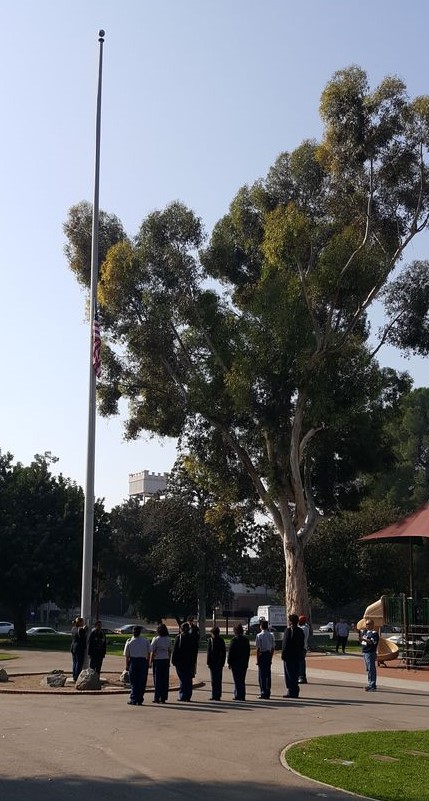 On that historic morning of the centenary of the end of WW1, my first Armistice Centennial Event, or ACE, for the day commemorating the Eleventh Hour of the Eleventh Day of the Eleventh Month of 1918 was hosted by the Los Angeles High School Alumni Association. The program explained that in cooperation with the California WWI Centennial Task Force, the Alumni Association had planned a full “day of commemoration.” Additionally, members of the Academy of Motion Picture Arts and Sciences, the L. A. Department of Recreation and Parks, the L. A. Public Library Department, and the Consulate General of France had played a hosting role. 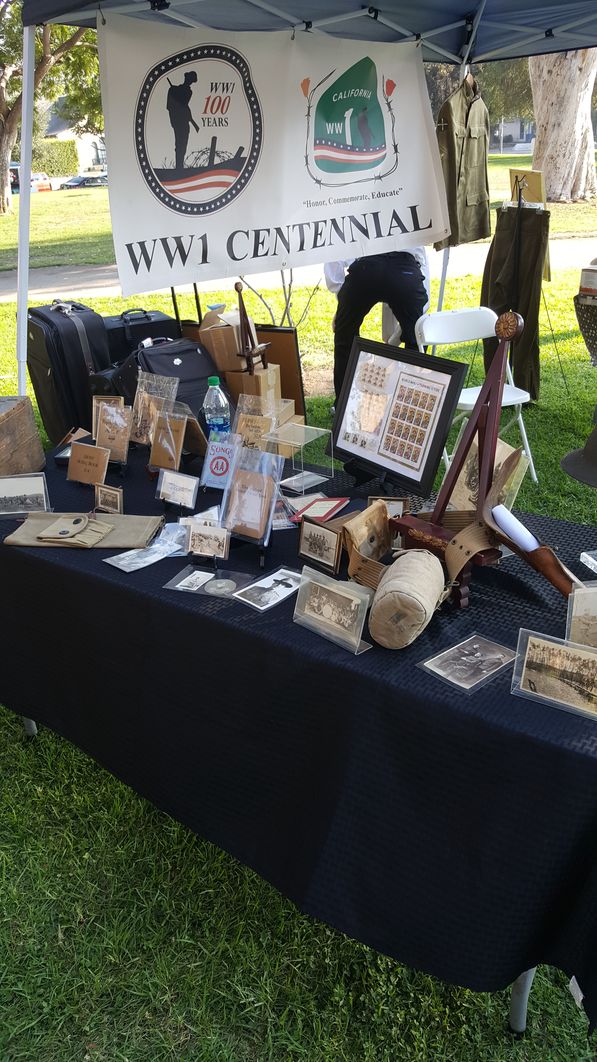 When I arrived at Los Angeles High School Memorial Park on the morning of Veterans Day, I did not know much about the high school across the street, nor the park for that matter, that sits in the heart of LA on Olympic Boulevard. It is most likely that the majority of Los Angelenos know little about the place's history, but clearly 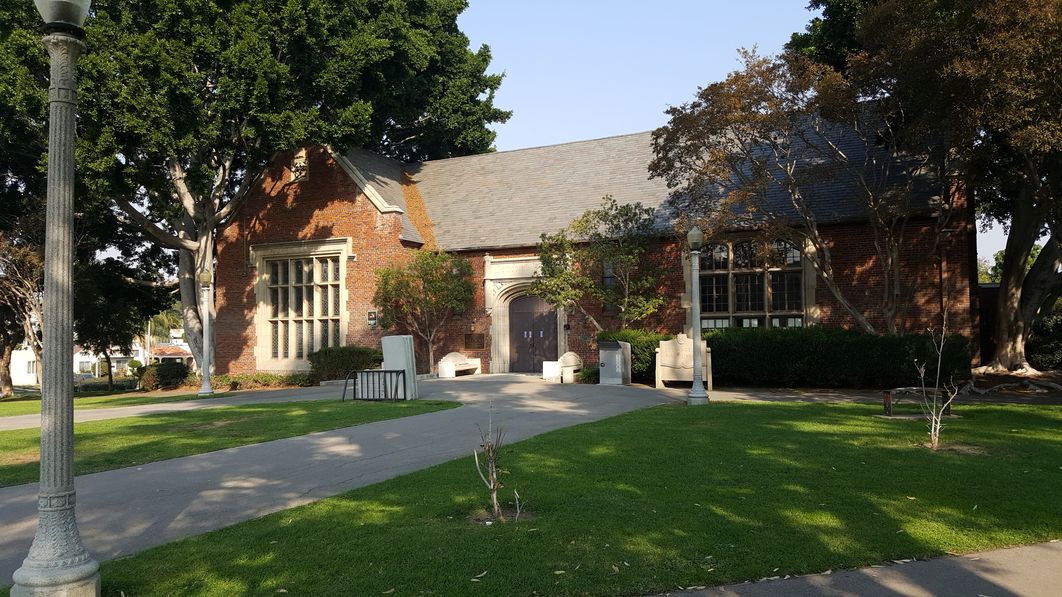 Memorial Library at LA High School Memorial Park.those who live nearby are very familiar with the park’s welcoming atmosphere and well-kept fixtures. A regular flow throughout the morning brought parents of children who delighted on the play equipment, elderly folks who sat peacefully, or read beneath the stately trees, and the occasional dog walker. As it was Sunday, the library was closed, 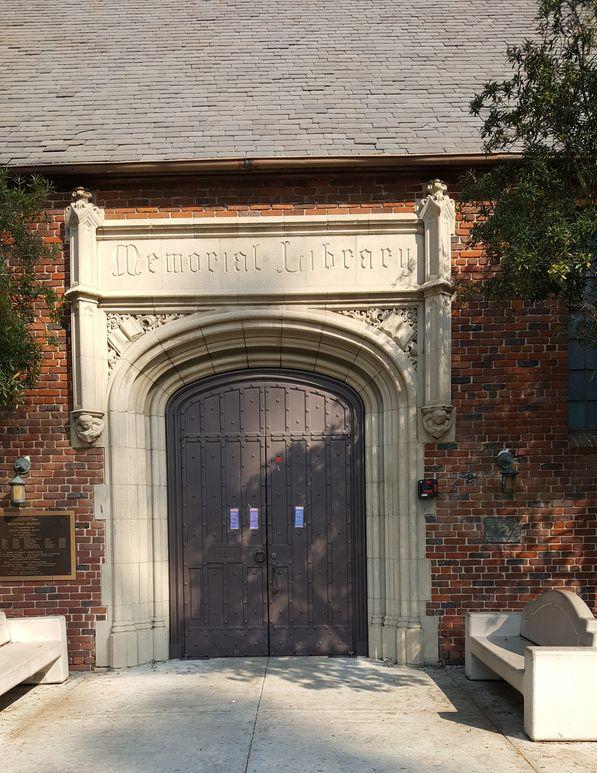 but one could peer in the windows to see a world of shelves and books that did not look ignored. The dedication plaque on the outside showed that those who died in WW1 had not been forgotten. This was a key ingredient in discovering the origin of this place. 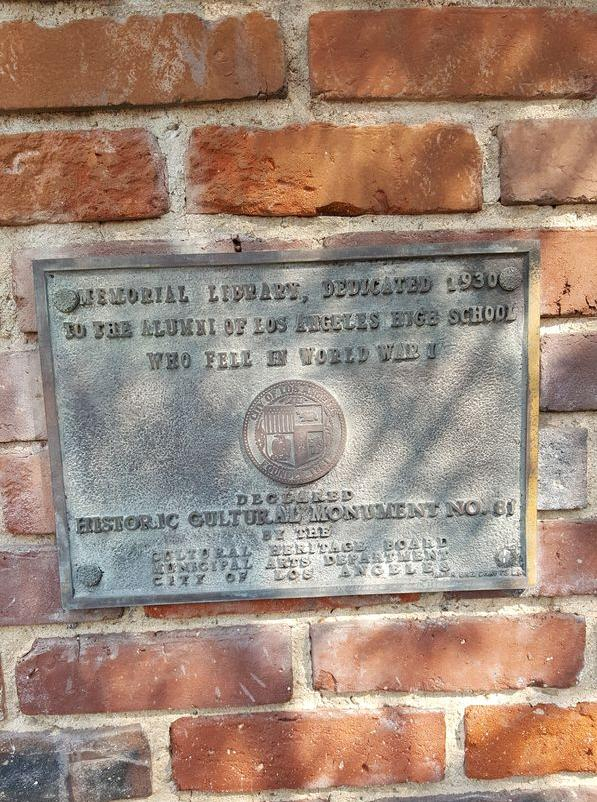 Just after WWI, the alumni association from the school just across the road, together with the then Los Angeles High School student body had teamed up to raise funds. The plan, to purchase the land facing the school for use as a park to commemorate fallen classmates of the Great War, was followed up by donating the park to the citizens of Los Angeles. Thus, the park officially bears the name “Los Angeles High School Memorial Park.” It is a point of pride for the alumni that Los Angeles High School Memorial Park is asserted to be the only park in the nation sitting on land purchased by the students and alumni of a public high school. They claim that it is the only park in Los Angeles dedicated to casualties just of World War I.

Over the years, it has served as a Senior Park and the site of a City Library. In fact, the library contains a stained-glass window in which are inscribed the names of the alumni who perished in the war and whose sacrifice the park was dedicated.

In all, 800 Los Angeles High School alumni served in The Great War, among them 100 lieutenants, fifteen captains, eight majors, and one major-general (Alexander Tuthill, class of 1890). Another important Alumni veteran name, William Gwynn was awarded the Croix de guerre for extraordinary bravery. 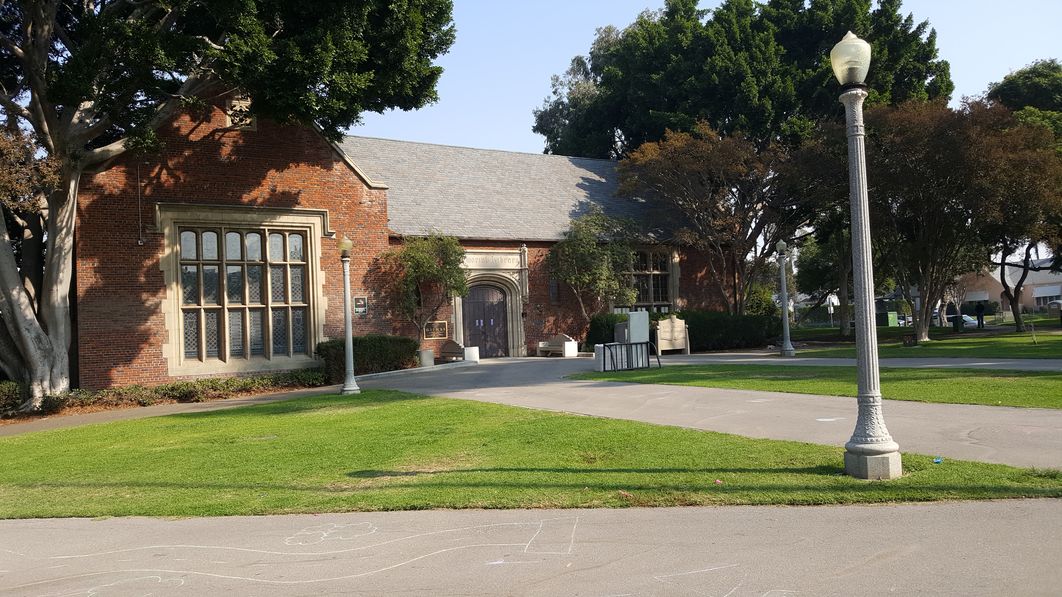 Founded in 1881, the Los Angeles High School Alumni Association, boasts being the oldest alumni association in the region and among the area's oldest entities in continuous operation. The association continues to donate to the park and to supervise the maintenance of its historic memorial glass window, the park's memorial arboretum, and other tributes.

Such was the setting of the Los Angeles High School Alumni Association’s Armistice centennial observance, entitled 100 Years of Remembrance. 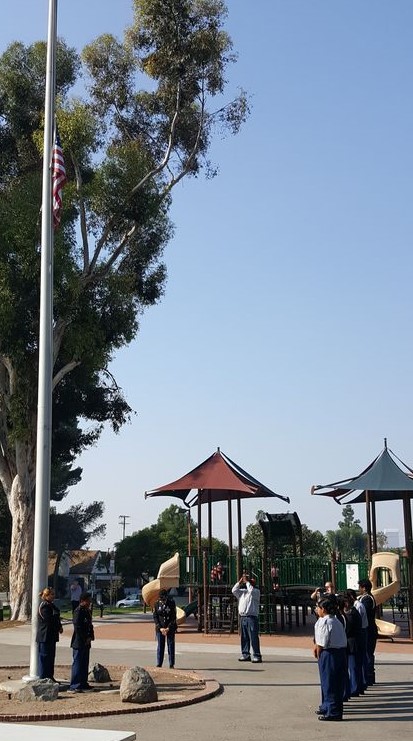 Los Angeles High School ROTC colorguardAt 11:00 a.m. a flag Raising Ceremony conducted by the Los Angeles High School ROTC Color Guard was led by Eric Fitzpatrick and Betsy Cuevas. The extra tall pole in the center of the park, standing almost higher than the ageless trees there stood as a proud reminder to the color guard of young Americans presenting our Star Spangled Banner to steadfastly support the flag, not only when she flew at her peak, but even when recalling her losses while resting at half-staff. 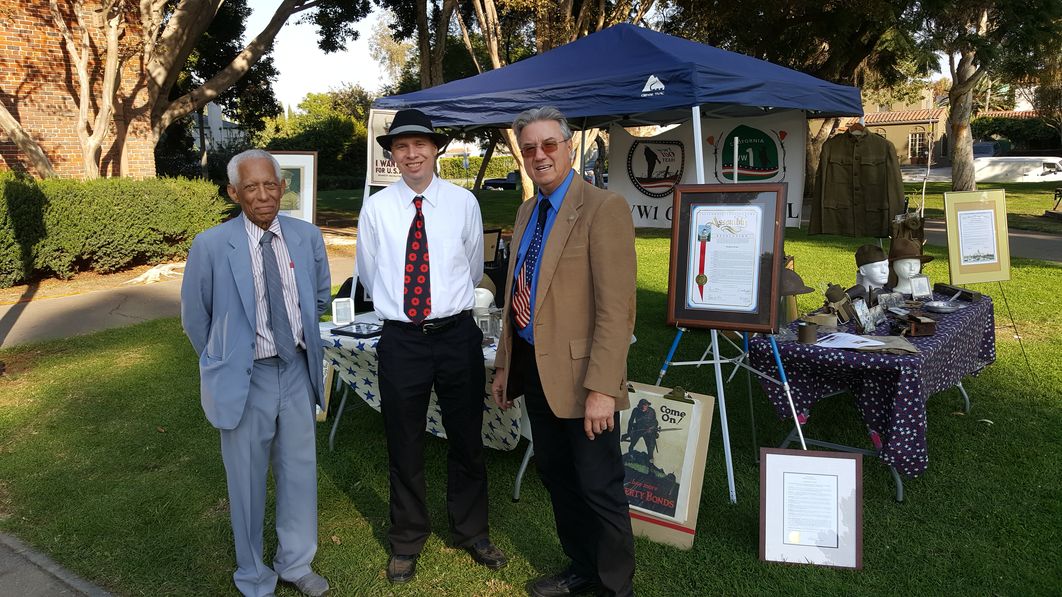 Dr. William Allen and fellow California WW1 Centennial Task Force Co-Directors Courtland Jindra and Bill Betten in front of Task Force booth.Exhibits and presentations followed throughout the day and gave those in attendance the opportunity to become more familiar with the facts of the ones who had served this great nation one hundred years ago.

A special treat was planned for just after noon at 12:30. The organizers were thrilled when a flyover of an antique aircraft came as expected. The flight made by pilot Gabe Lopez in a vintage bi-plane, not too much unlike those cloth and wood chargers of the air World War One 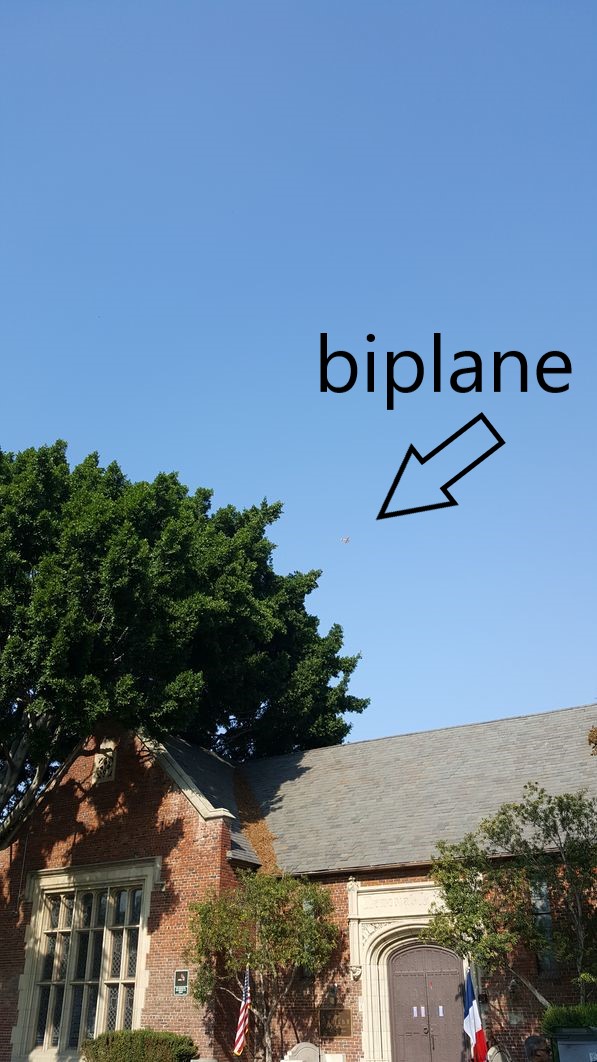 Organizers cheer as a vintage biplane appears over the park's Memorial Library as scheduled.pilots flew and fought in, gave everyone quite a show with repeated low p 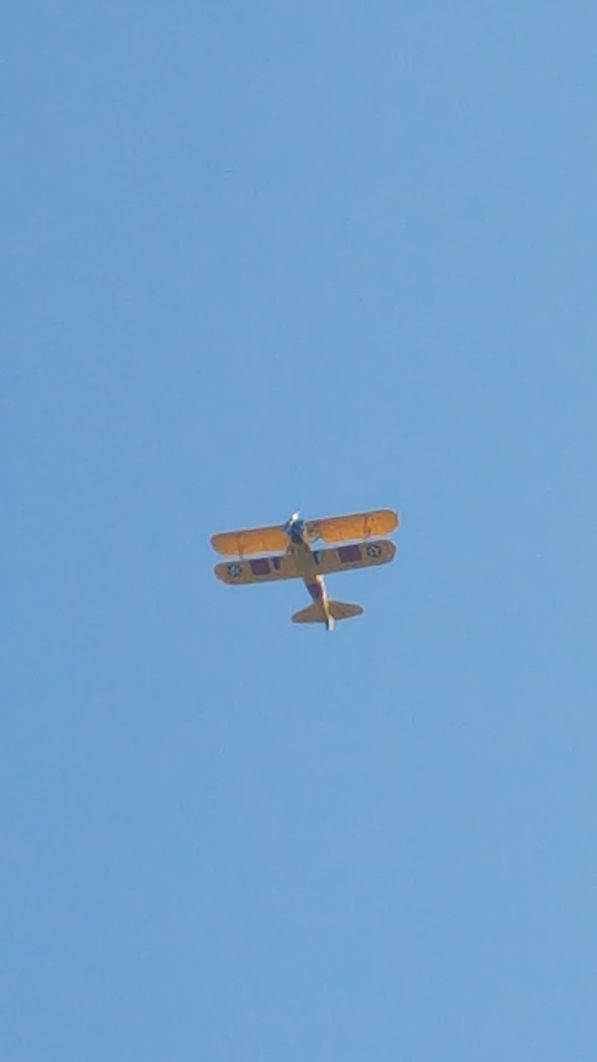 Stearman biplane flown by Gabe Lopez.asses and turns. It caused everyone in the area, not just those in the park, to recall that fragile time in flight history. The sights and sounds brought each person physically that much closer to experiencing the real threats the Doughboys faced in WW1.

The program sheet explained that Mr. Lopez, had been taught how to fly by his father, 1st Lt. Edward J. Lopez, a fighter pilot who flew P-47-Thunderbolts in the Second World War with the 365th Fighter Bomber Group called the Hell Hawks, “and who this morning, by decree of the President of the Republic of France, was appointed a Chevalier (Knight) of the French National Order of the Legion of Honor.” The memoirs of Lt. Lopez, who is also a recipient of the Distinguished Flying Cross and a Purple Heart, have been published as Flight of a Hell Hawk. 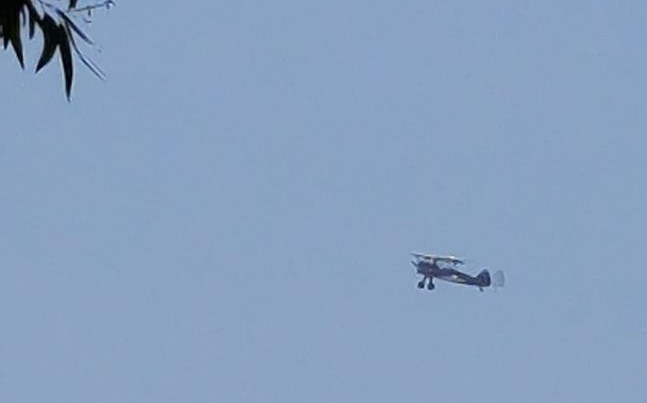 Coming around the strearman at a distance.On this afternoon’s flight, Gabe was flying a 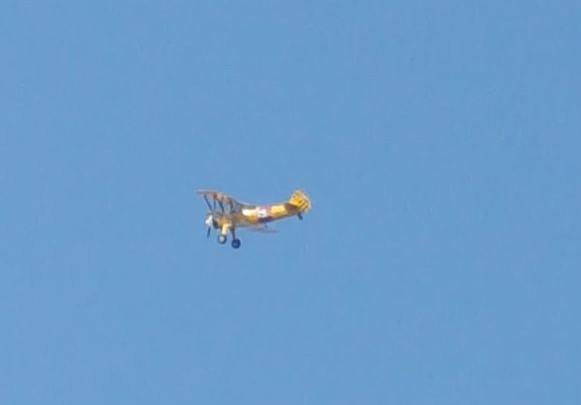 Pilot Gabe Lopez waves to us all below.1940 Boeing Stearman Bi-plane very similar to the first aircraft that his dad learned to fly while in primary training during WWII. The bright yellow bird with U.S. Navy markings was easily spotted even in the park's tall tree tops, unlike the stealthy camouflaged eagles that soared in the skies one hundred years ago. 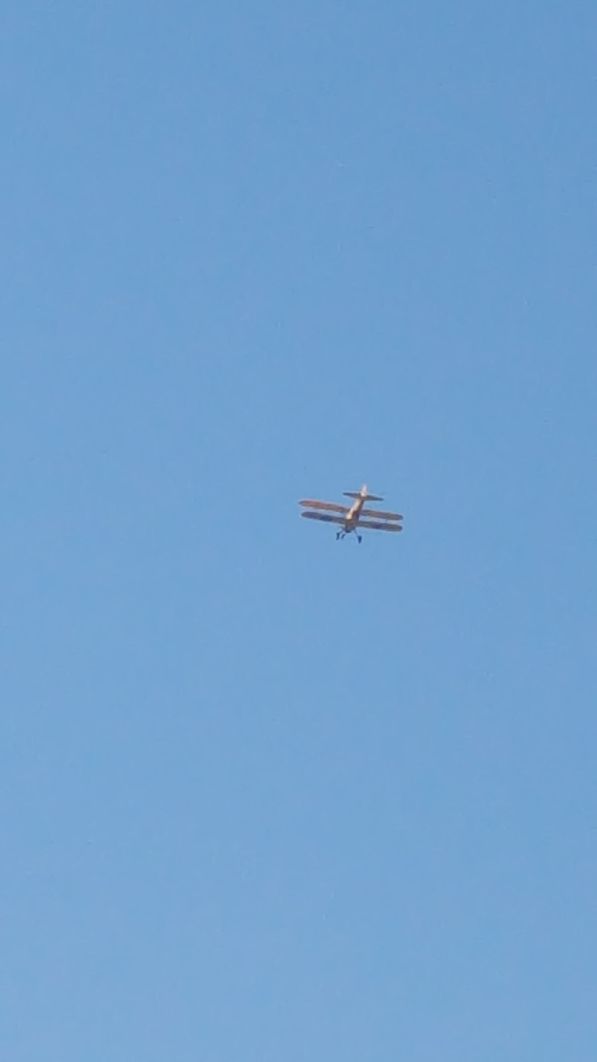 The late-afternoon highlight was the showing of what was likely the most famous of early WW1 films. At 4:30, William Wellman, Jr. introduced his father's film Wings. The film, to start as soon as it got dark enough, was accompanied by pianist and composer Michael Mortilla. 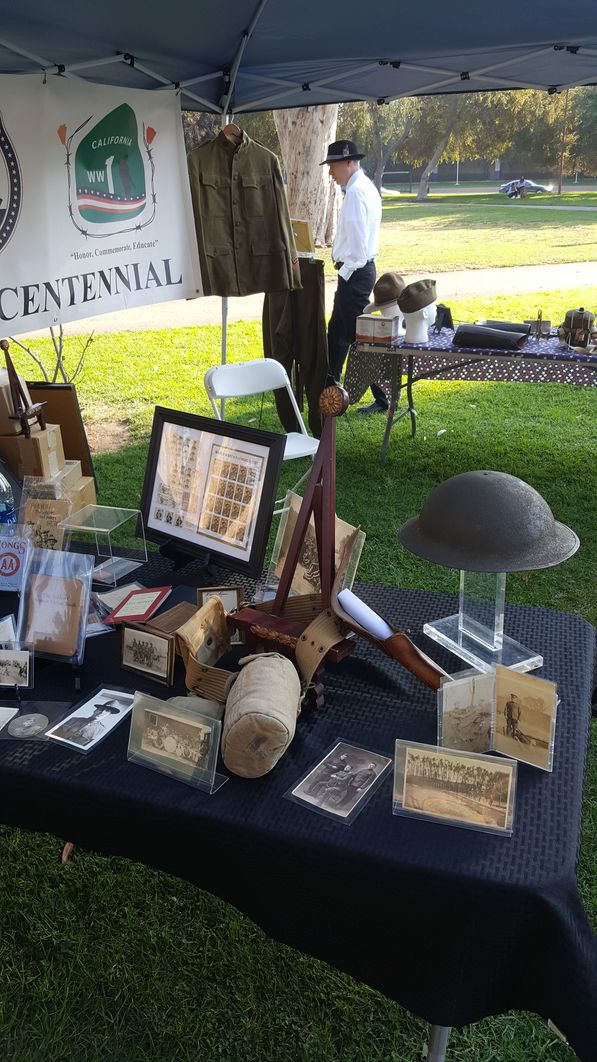 Co-Director Courtland Jindra helps in taking down the Task Force Booth and Bill Betten's display.As we had other ACE events to attend that day, we had to leave before the program was finished, but were there to witness the extra-large movie screen being erected. The thirty-or-so foot tall screen was large enough to practically remove from the audience’s view the brick library sitting behind it. As we packed up the Task Force booth to head out to other commemorations the park transformed into an outdoor cinema. 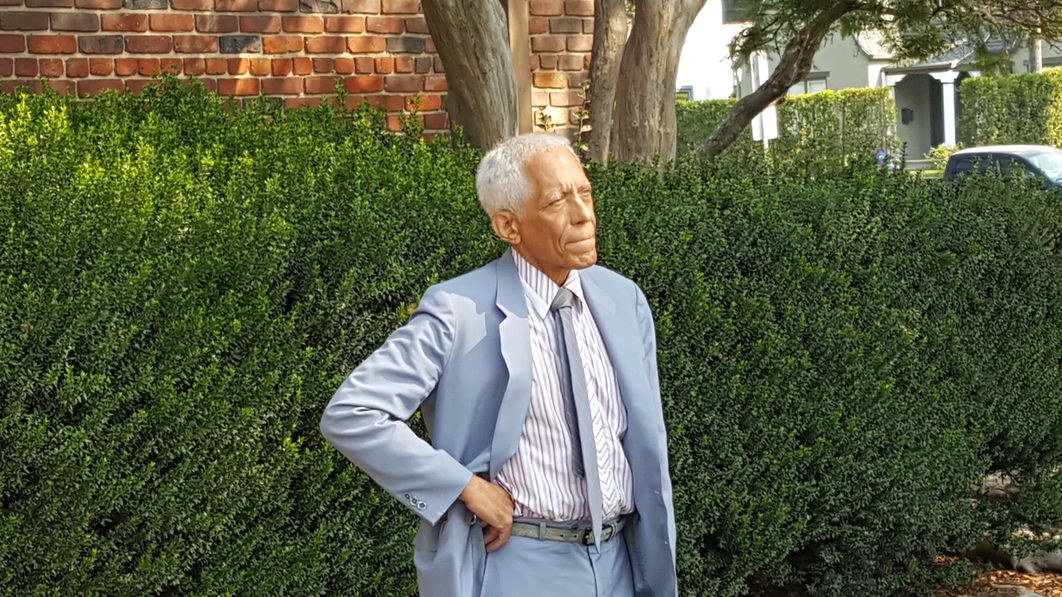 The two hour and twenty-four minute film completed the evening, the conclusion of which was made by an observance by William Allen, Ph.D., Event Coordinator and Secretary of the Los Angeles High School Alumni Association. 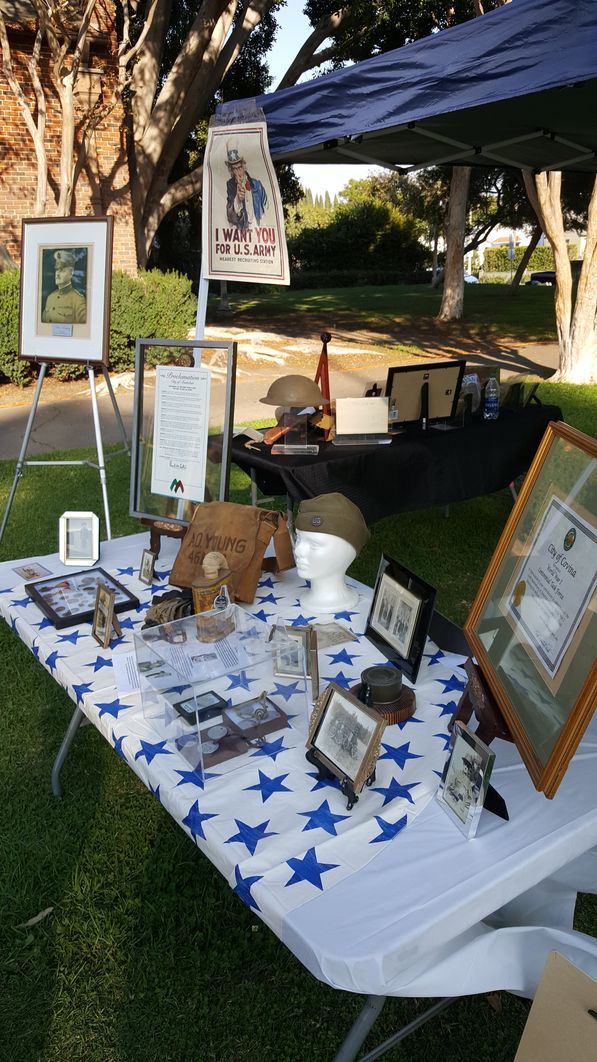 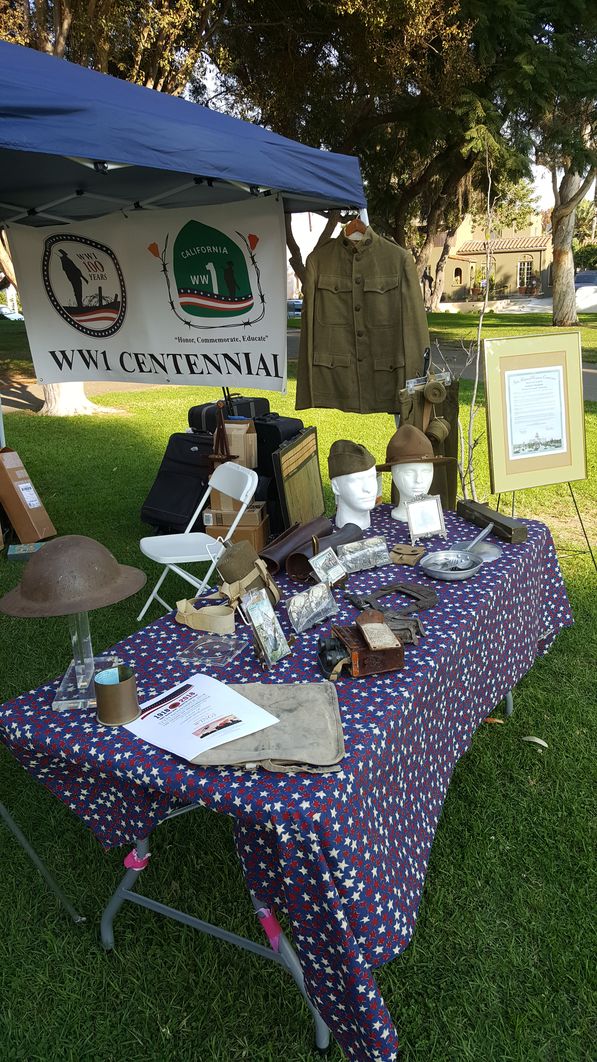 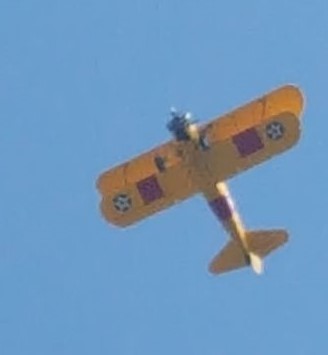 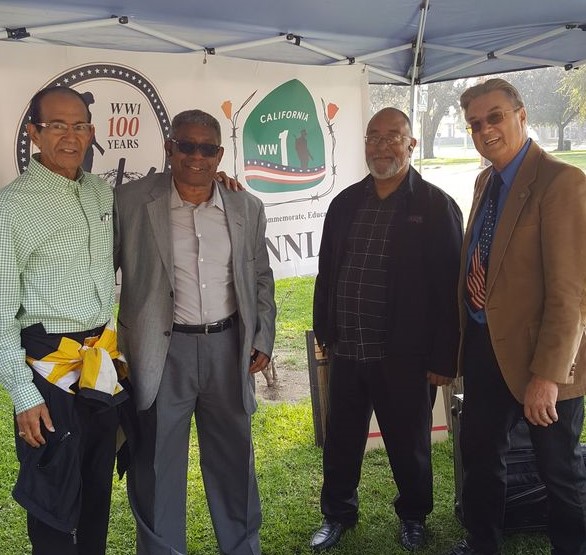