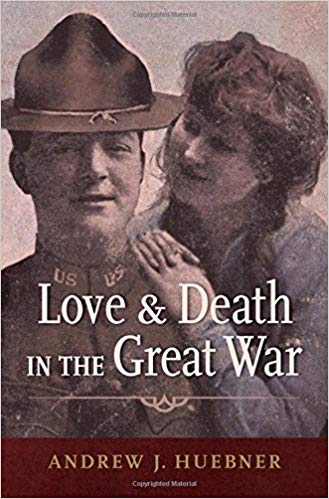 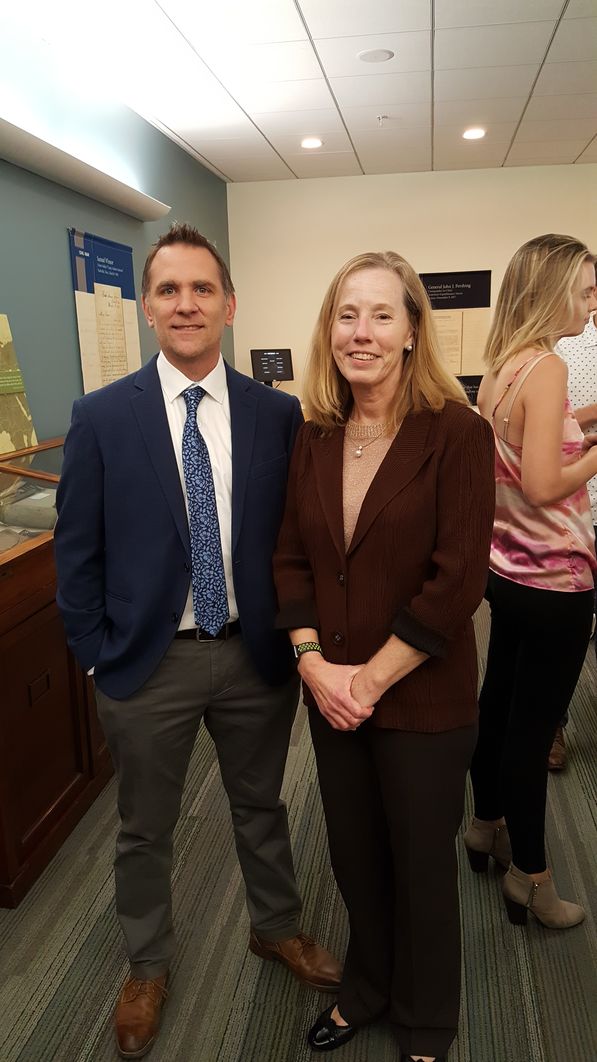 Dr. Huebner and Dr. Keene greet guests at the reception.The California WW1 Centennial Task Force had been invited to attend Chapman University’s America’s Great War Romance: Love and Death, 1917-1919. The event at Wilkinson College of Arts, Humanities, and Social Sciences presentation at the Center for American War Letters included displays and speakers featuring a special lecture by Dr. Andrew J. Huebner, Associate Professor of History at the University of Alabama.

After a period of a well-stocked reception, in a room exhibiting a wide variety of letters, artifacts, and posters discussing the writings of those 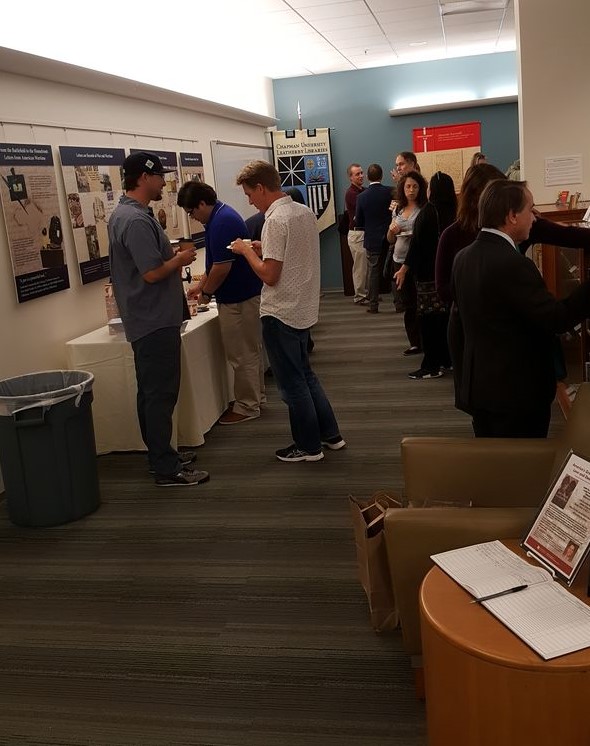 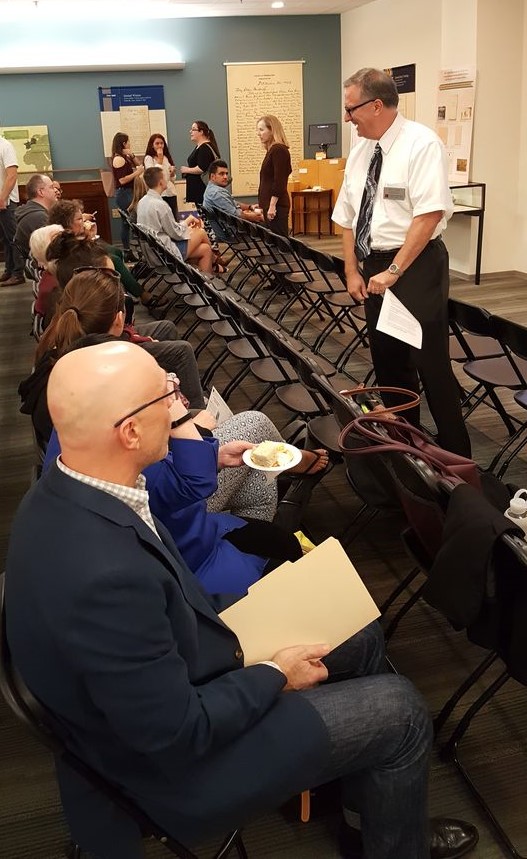 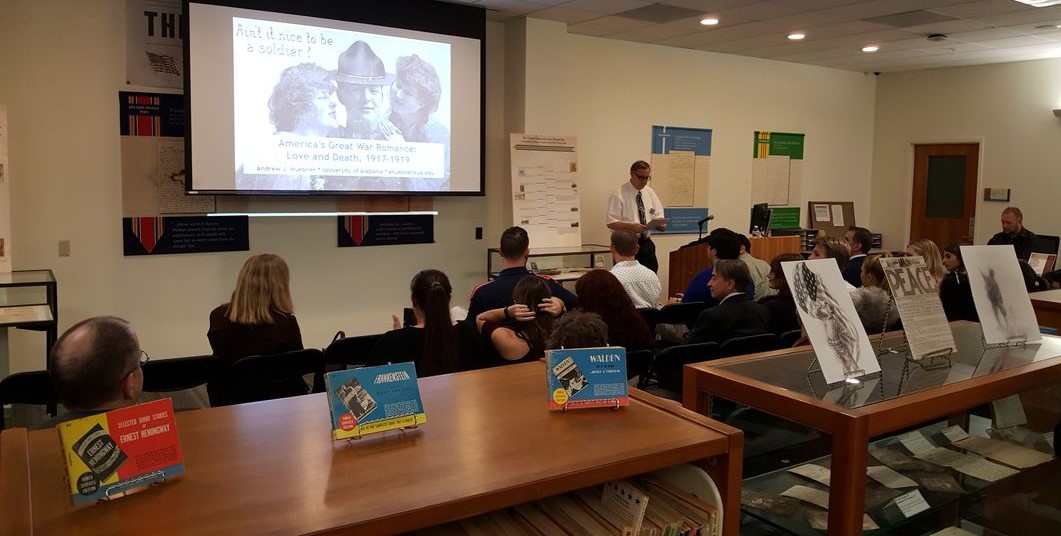 University Dean Kevin Ross speaks. (Only those seated in front of the exhibit are visible.)Mr. Carroll explained that it was his book LETTERS OF A NATION: A Collection of Extraordinary American Letters, a New York Times bestseller, which led him to create the Legacy Project, to preserve wartime correspondences. He had collected an estimated 100,000 letters from every war in U.S. history which he then donated to Chapman University. The Legacy Project has been re-named “The Center for American War Letters,” and is now archived in Leatherby Libraries at Chapman. Through this work with the Center, Carroll continues to uncover and preserve soldier’s letters, and call light to the importance of saving the war-related personal communications. 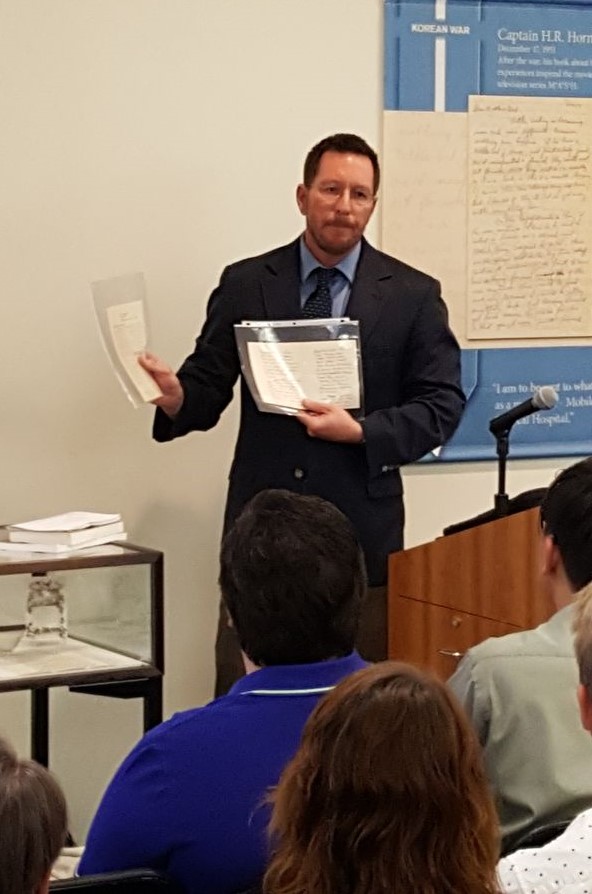 Andrew CarrollAdditionally, Carroll has edited two other New York Times bestselling books on the topic which feature hundreds of previously unpublished correspondences from American conflicts, WAR LETTERS and BEHIND THE LINES. He is also the author of the play If All the Sky Were Paper, which began touring the United States in August 2013 and has been performed coast-to-coast, from the Kirk Douglas Theater in Los Angeles to the Kennedy Center in Washington, DC. All of these performances were directed by John Benitz, the chair of Chapman University’s Theater Department. The play is based on Mr. Carroll's worldwide search for “the most extraordinary war letters ever written.”

Andrew Carroll’s most recent book is MY FELLOW SOLDIERS: General John Pershing and the Americans Who Helped Win the Great War, published in 2017, and that same year Andrew was featured in the PBS documentary, “The Great War,” about World War I. 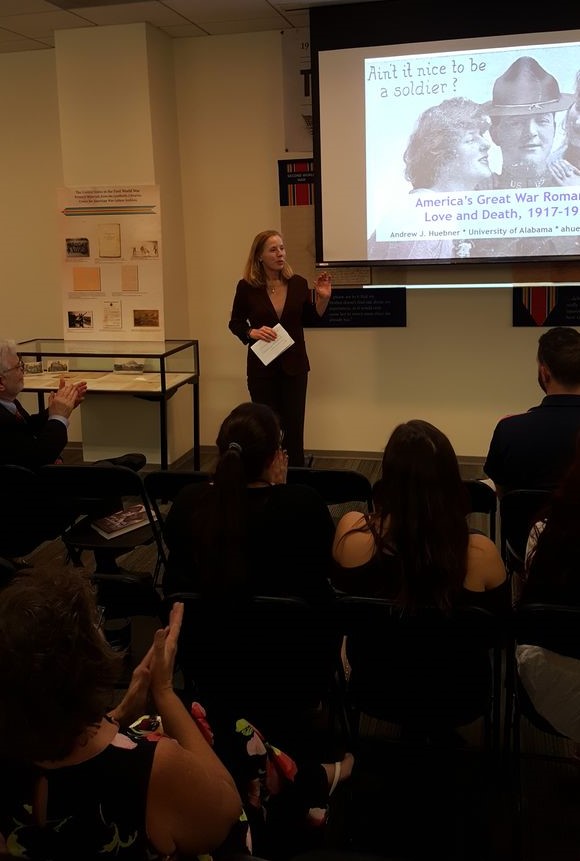 Dr. Jennifer KeeneDr. Jennifer Keene, Professor and Chair History Department Chapman University, then stepped up and shared that the evening’s event was in conjunction with the exhibitions: The World Remembers: Honoring Victory and Loss at the End of the First World War on view from September 12 – December 14, 2018, and the international The World Remembers display on view from September 12 – November 11, 2018 in the Center for American War Letters Archives and invited all to see these exhibits if they had not already. 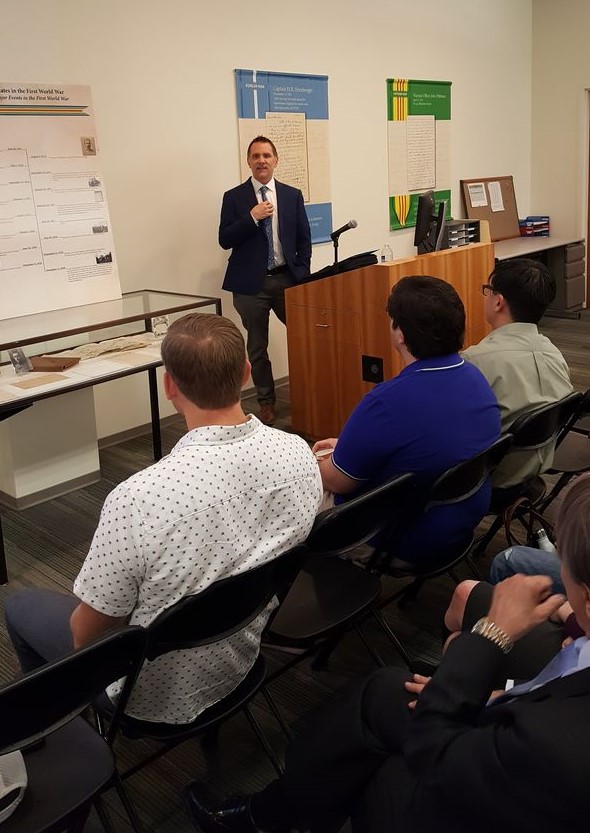 Dr. Andrew Huebner, author of Love and Death in the Great WarDr. Keene then introduced the evening’s guest speaker, Dr. Huebner, and that the Department of History shares a unique interest in the topic of the speaker’s book, and explained that it is an important contribution. She mentioned that Dr. Huebner received his doctorate in history at Brown University, and before writing his current release wrote, The Warrior Image: Soldiers in American Culture from the Second World War to the Vietnam.

Then Dr. Andrew Huebner, the author of Love and Death in the Great War, came up and gave a very interesting presentation. He stated that of the Great War era, Americans often hear the tale of American participation told as a love story. “Fighting offered romance, and not just on the battlefield. It promised to stir “khaki-mad” passions in young women, bolster the romantic credibility of the Doughboy, and cultivate national chivalric virtue.”

Instead the tale soon plummets into the reality of war. He states that, “The daily lives of the Missourians Mae and Eliga Dees—visible through a full set of letters between the two while Eliga was fighting in Europe—suggests a different tale of war, one obscured by the passage of time and the romantic tones of American wartime culture.” 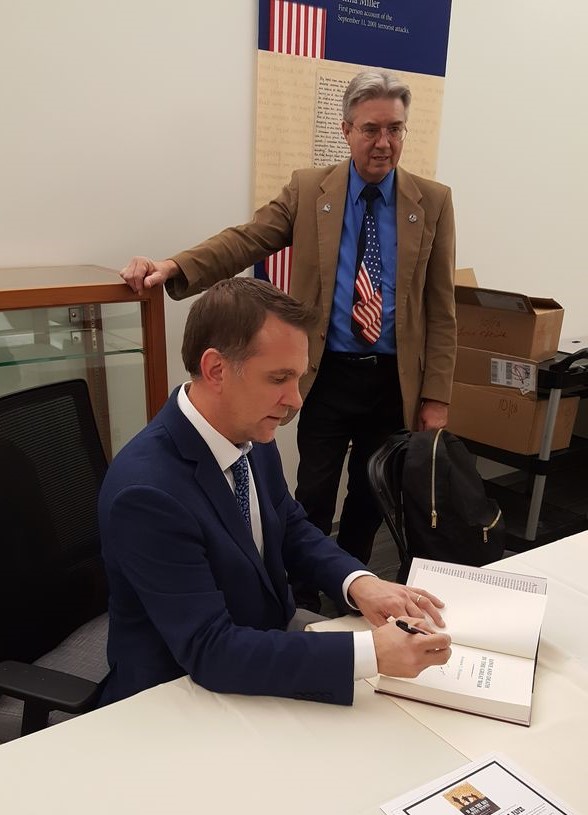 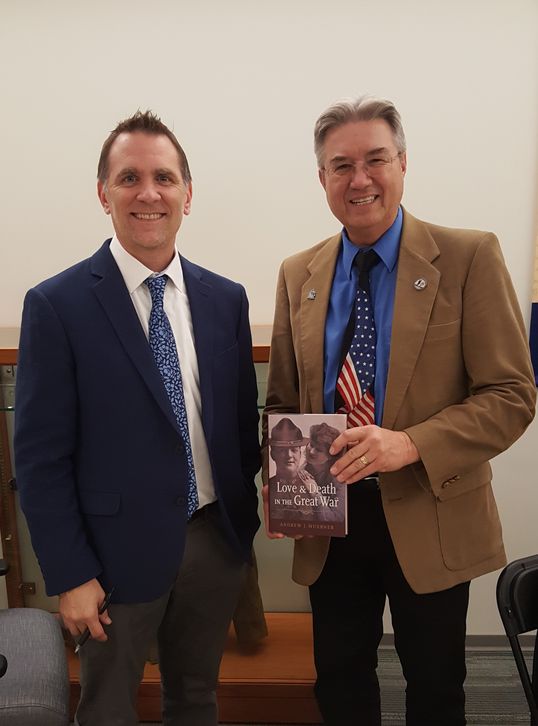 The talk was followed up with a book signing where copies of Dr. Huebner’s book were available for purchase. 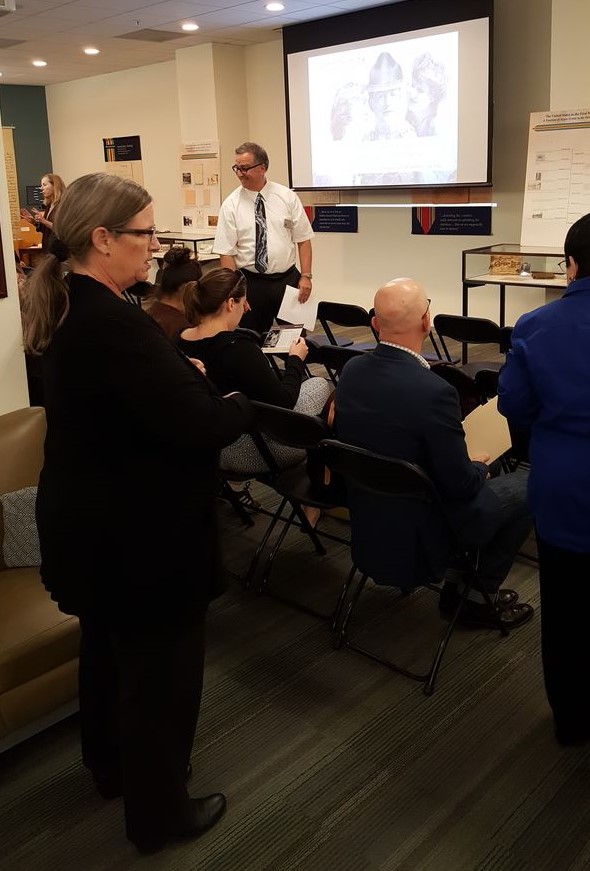 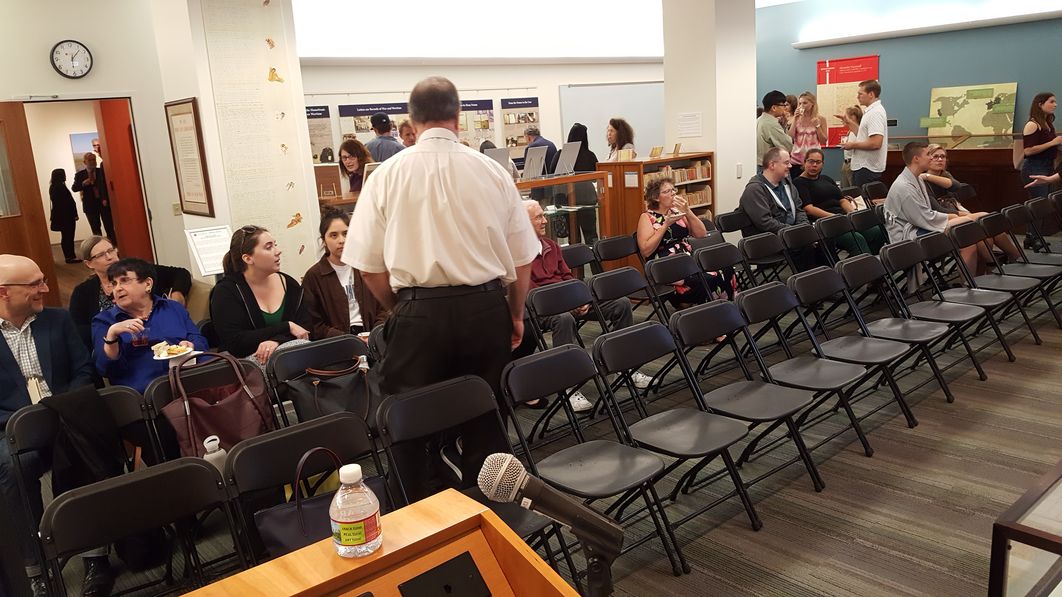 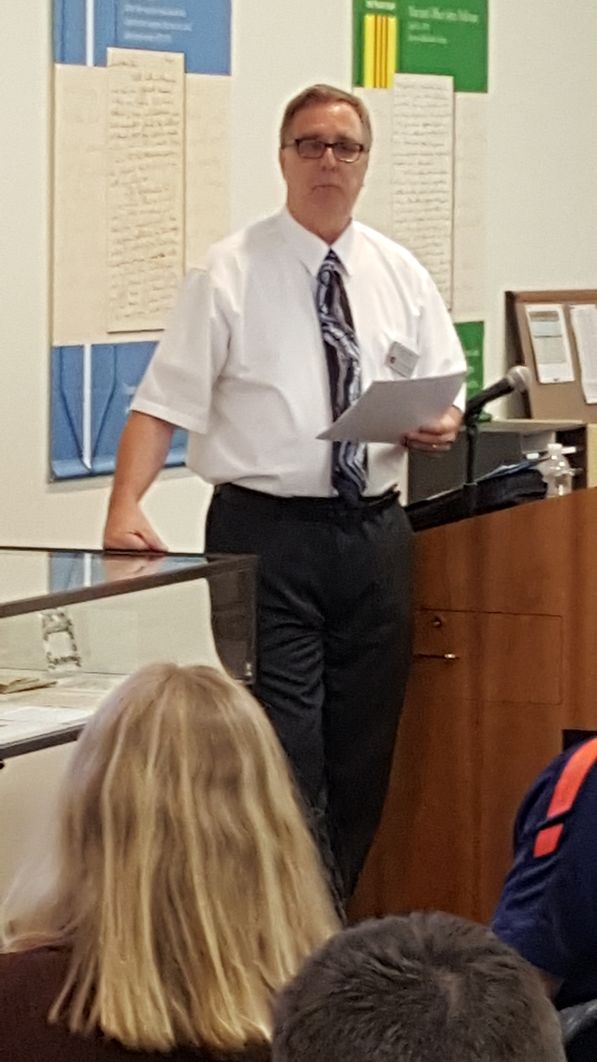 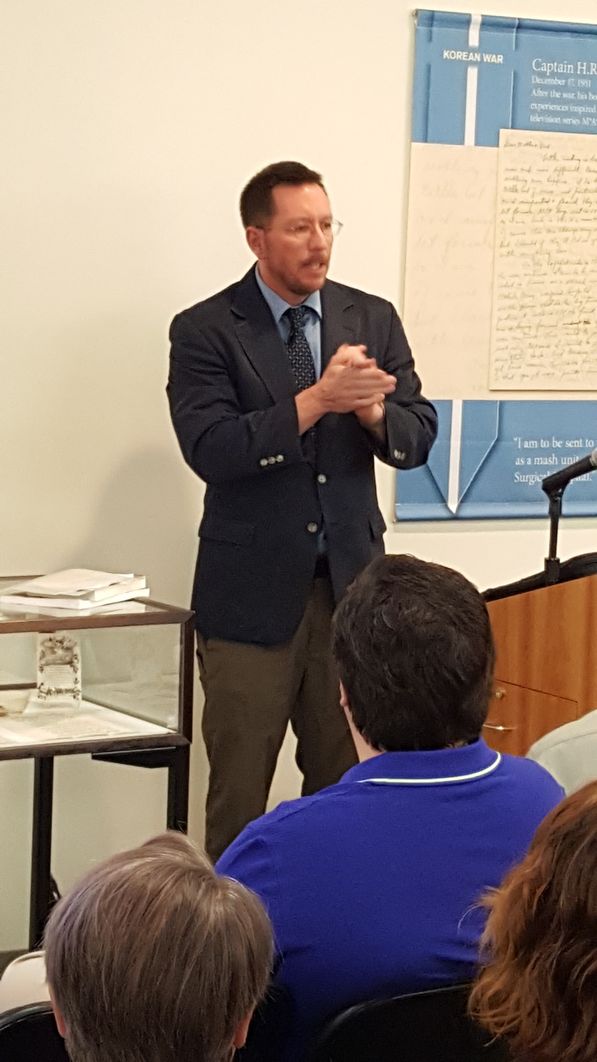 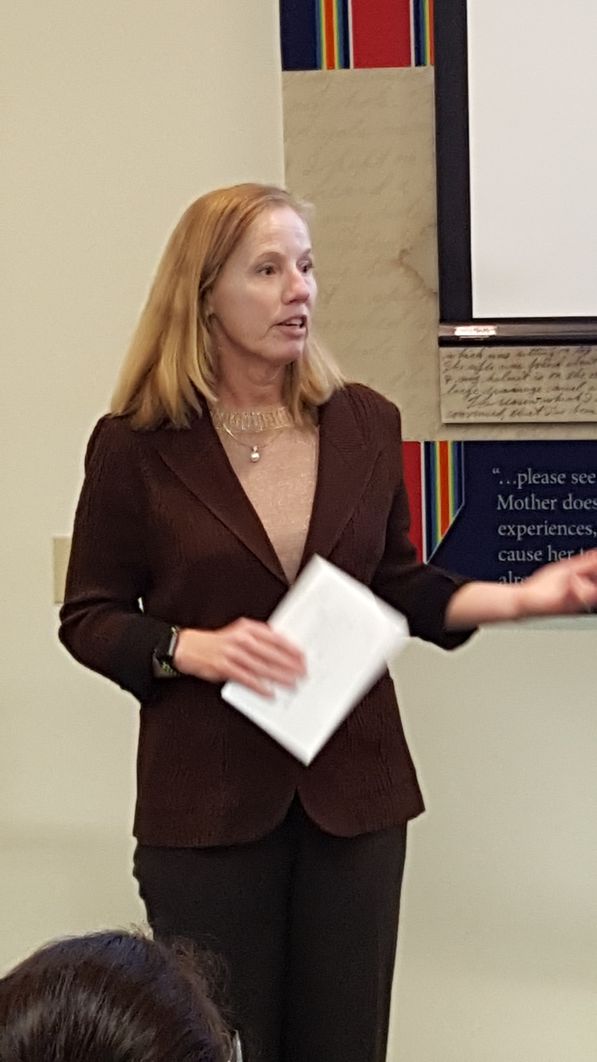