Located at the History Department at San Jose State University 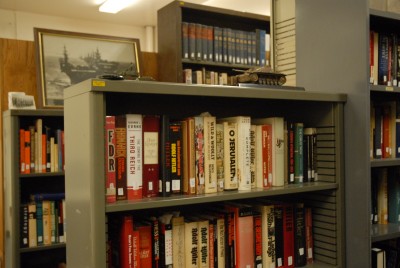 The Burdick Military History Project is part of the History Department at San Jose State University and supports the study and teaching of military history, the education of Student Veterans, spouses and dependents, military students, ROTC cadets, and the United States Armed Forces recruiting and educational efforts. It exists in honor of Professor Charles B. Burdick and his contributions to the study of military history.

The Charles B. Burdick Military History Collection represents the research files and collections amassed by military historian and SJSU history professor, Charles B. Burdick. The collection documents the history of World War I and World War II. Over 10,000 books, photographs and artifacts kept in the Burdick Military History Project Collection, located at Industrial Studies Room 239 do not circulate, but the room is open to the public for study. Student Veterans, dependents and spouses, military students, ROTC cadets and military recruiters are especially welcome. Dr. Jonathan Roth, Director of the Burdick Military History Project expresses that, "This is a Military-Friendly Space."

After service in the United States Army, Charles Burdick graduated as a history major from what was the known as San Jose State College in 1949. He then obtained his Ph.D. from Stanford University. The research for his dissertation, on the German High Command in World War II, involved interviews with many of the surviving members of the German General Staff.

In 1957, Burdick returned to San Jose State as a member of the History Department. In 1976, he became department chair and strove to create a substantial military history program building the library’s military history collection. During his career, he authored dozens of articles and chapters in books, while writting or edited more than twenty other books. Dr. Burdick retired in 1988, after a career at San Jose State lasting 45 years. In 1998, he passed away. That year, in his honor that the Project was named for him.

The Project has sponsored numerous lectures, panels and talks, including the annual Charles Burdick Memorial Military History Symposium, held every spring since 1996. Topics have included African-Americans in the military, Women in the Military, the Military History of Iraq, SJSU at War; and our most recent event, a panel discussion “Writing Military History,” which included four local writers of popular military history. We also sponsor the annual Harry Gailey Memorial Lecture on a military campaign, as well as other presentations. We also provide support for the Air Force and Army ROTC, military recruiters, and the SJSU Veterans Student Organization. We have donated material for a number of university exhibits, including the 150th anniversary and a recent one in Special Collections on World War II posters.

The Project collection includes rare military history books and a variety of other printed material such as journals, pamphlets, and field manuals, as well as photographs and artifacts. The Project's American militaria, includes an 1812 Brown Bess musket, and even a 17th century English cavalry helmet.

Also of significance is the Veterans oral history project, which already has collected dozens of oral histories from veterans.

The Burdick Military History Project Office is open Monday through Friday, 10am to 4pm.

The Burdick Military History Project is a great resource for any student of military history.