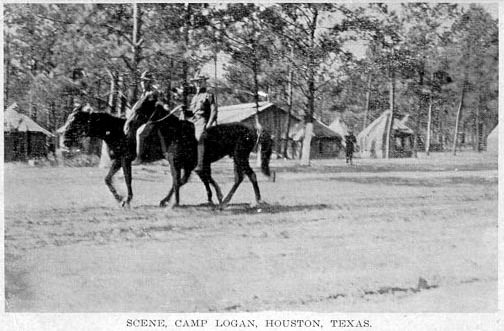 One hundred years after the outbreak of World War One, it is often hard to see the remnants of the conflict that so affected communities across the nation. Unlike other wars of the twentieth century, there are no veterans of World War One left to tell their story; film and photography, still in their infancy at the time, provide only an incomplete and dated record. Instead, World War One is remembered silently, through monuments and parks that dot the country.

In the heart of Houston lies Memorial Park, one of the largest urban parks in the country. Thousands of Texans take advantage of the park’s running trails, softball fields, swimming pools, tennis courts, and golf course everyday, often without realizing the history below their feet.

“Somehow our appreciation of what went on in World War One has been lost,” says Louis Aulbach, a local historian, “ and most people don’t realize that it’s named Memorial Park as a memorial to the soldiers of World War One.”

Furthermore, most people aren’t even aware that the park sits on land formed out of Camp Logan, a World War One training camp that saw tens of thousands of Americans prepare for war. “Most people don’t know the story of World War One and how the country had taken on the task of entering this global war, and that’s what we have to talk about when we talk about Camp Logan.”

In 1917, after years of watching the war from afar, America plunged into a frenzy of preparation. In the span of only two years, over 4.7 million men, many of whom had never left their hometown, were shipped across the country to training camps, and across the world to battlefields. Two aspects of Camp Logan underscore the nation’s commitment to the war effort: the speed of construction, and its massive size. In the span of only a few months, a camp half the size of the island of Manhattan was built to train 50,000 soldiers, all in a city whose population clocked in at only 100,000 citizens. Additionally, camps like Camp Logan trained soldiers from across the country, further highlighting the national character of the war effort. 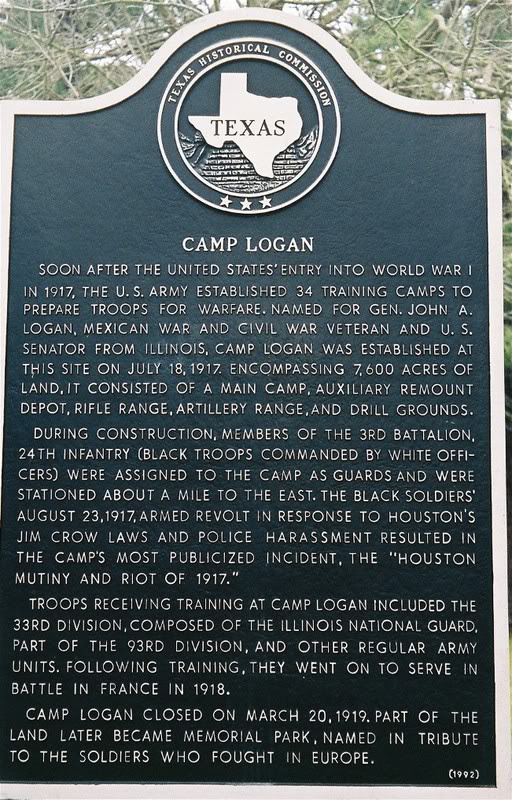 “It’s not just about Texas... we have an important link now with Chicago and Houston” says Mr. Aulbach, referring to the Illinois National Guard’s 33rd Infantry Division, which was officially organized at Camp Logan, and went on to fight in the Meuse-Argonne Offensive with distinction, suffering over 6,000 casualties. The camp also hosted the 370th Infantry Division, which was one of only two African-American regiments trained for combat, and the only one to be commanded by African-American officers. “These are unique stories of World War One, part of our national story, and they took place right here in Houston.”

Camp Logan never reached its full capacity, however, due in large part to the sacrifices of the men in divisions like the Illinois 33rd. Less than 18 months after construction began at Camp Logan, the armistice was signed; by 1919, the camp lay abandoned. In 1924, large portions of the camp were sold to the City of Houston, which renamed the land Memorial Park in honor of the soldiers who had fought and died in the Great War.

Today, there are only trace signs of 1,300 buildings and training fields of Camp Logan, but thanks in part to the efforts of people like Mr. Aulbach and his colleague Linda Gorski, the history of the camp will be brought back alive for future generations. “The Memorial Park Conservancy is planning a redevelopment of a wooded section of the park that has some of the original foundations, and we’re working with them on the historical context... to develop a walking trail with information kiosks that tell the story of the camp and how it fits into the story of our country and the story of Houston itself.” 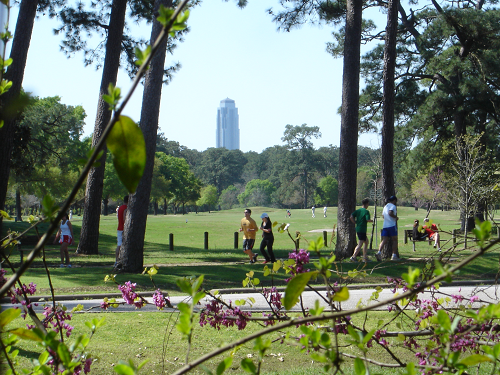 While the redevelopment of the park is scheduled for the 2017 centennial of America’s entry into the war, Mr. Aulbach says that the renewed interest in Camp Logan is already having an affect on Houstonians. “Once we start talking about the camp that was here, all of a sudden people say ‘Wait a minute, I think my grandfather was there,’ and give us family photos that had been put away and forgotten about. It’s been really gratifying to see people bring out those photos and memories of their ancestors.”

Michael Williams is a 2015 Intern at the World War One Centennial Commission.