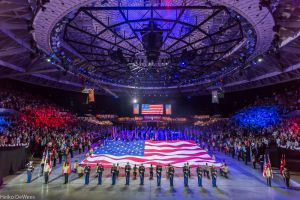 Established in 1997, the Virginia International Tattoo is an annual celebration of patriotism and international goodwill. Every year, the Tattoo welcomes over 1,000 performers from all over the world in a display of military bands, drill teams, massed pipes and drums, Celtic dancers, choirs, and more. It is the largest tattoo in the United States, drawing an audience of over 40,000 people each year, and was named in 2016 as American Bus Association’s Top Event in the United States.

100 years from America’s entry into WWI and the founding of the World’s Largest Military Base – Naval Station Norfolk.

With Naval Station Norfolk’s own Fleet Forces Band alongside performers from 6 Nations who fought side by side 100 years ago - Australia, Canada, France, New Zealand, The United Kingdom, and The United States - the 2017 Virginia International Tattoo will commemorate these milestones in a way that no one else can.