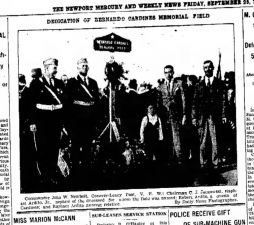 On Friday, September 29, 2017, the Rhode Island World War One Centennial Commission (RIWW1CC) will rededicate the Bernardo Cardines Memorial Field, 20 Americas Cup Avenue, Newport, RI, 02840. The event is free to the public and will include a commemorative Army-Navy baseball game played by students from the U.S. Naval War College dressed in period baseball uniforms. Gates open at 16:30 pm. The abbreviated baseball game (less than nine innings) will conclude at 20:30 pm.

The baseball field is one of the oldest baseball fields in the U.S. It was dedicated on September 20, 1936, to Private Bernardo Cardines, M Company, 310th Infantry Regiment, 78th Division (National Army), American Expeditionary Forces, who was killed in action on September 22, 1918.