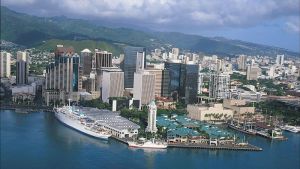 Location: The Hawaii World War One History Conference at the Hawaii Pacific University Campus at the Aloha Tower
(where our opening ceremony was held two years ago today).

Description: WWI Symposium at the Hawaii Pacific University Campus at the Aloha Tower and Pearl Harbor Visitor Center. This academic symposium is co-hosted by Hawaii Pacific University, the Arizona Memorial Visitors’ Center, and the Hawaii WWI Centennial Task Force. The symposium will feature speakers with presentations focused on Final military actions of 1918, such as the Siberian Intervention 1918-1920, as well as the major activities associated with the Paris Peace Conference.

The symposium will run from 0800-1630 26 and 27 June, and a half day on Friday 28 June, which is the final day of the WWI Centennial Commemoration Period.
In addition to the symposium, there will be a special boat tour of Pearl Harbor, narrated by Chief Historian, National Park Service Ranger Daniel Martinez, to recall the events and activities in Pearl Harbor during WWI.


Half day on 28 June, with afternoon activities at the Arizona Memorial Visitors' Center