"The deadliest weapon in the world is a Marine and his rifle."-- General John Pershing, U.S. Army 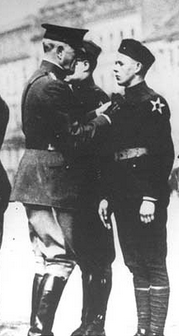 Private John J Kelly, USMC, receiving the Medal of Honor from General Pershing, Commander, American Expeditionary Forces. Although the 1973 fire at the National Personnel Records Center in St. Louis, MO, did not destroy Marine Corps records, knowing the date of enlistment can help when requesting copies of the records from the National Archives at St. Louis. Marine Corps muster rolls for World War I, part of the Records of the United States Marine Corps (Record Group 127) held by the National Archives and Records Administration, give the date of enlistment. Copies of the muster rolls are available at Ancestry.com (1). Scanned from microfilm, not the original records, some pages may be fuzzy.

A muster roll, taken every month or two, lists who is present or absent on the date of the muster. The records are organized by year, month, and then by duty station. The muster is then organized by rank and name of the Marine in alphabetical order. For each Marine, the muster roll also gives the date of enlistment or reenlistment and there may also be notes in the comments column. This column may show why the Marine is absent including whether sick or in the hospital, date of transfer to or from another duty station including detached service, and when and where the person mustered out of the Marine Corps. The comments column also lists promotions and demotions.

The muster roll may provide a serial/service number, called a case number by the Marine Corps. The muster rolls, which are not enlistment records, do not list more identifying information such as date of birth, a physical description, or next of kin.

The records can be searched on Ancestry by the name of the Marine; the date, including years; or the place of mustering in. The enlistment date and muster in date are not the same; although there is often only one enlistment date, a person can be found on multiple muster rolls. Matthew Abbott, who enlisted on October 28, 1914, is listed on 95 muster rolls ending when he went on furlough from May 1-6, 1924, from the Barracks Detachment, Marine Barracks, Navy Yard, Philadelphia. Abbott first mustered in as a private and in 1924 he was a corporal. 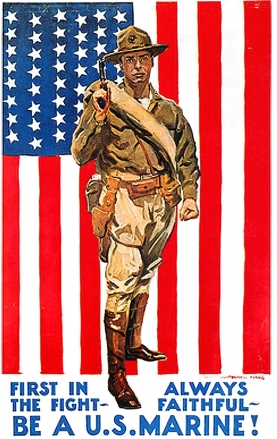 Opha Mae Johnson enlisted on August 13, 1918, at the Headquarters, U.S. Marine Corps, Washington. Josephus Daniels, Secretary of the Navy (1912-1920) encouraged the enlistment of women into office duties to free the men for combat. Johnson is listed on the muster as “Enlisted personnel as clerks and messengers in the various staff offices at Headquarters, Marine Corps. According to the Ancestor index, she is on six separate muster rolls, the final February 1919.

(1) Ancestry.com is a subscription website; however, all National Archives facilities and many public libraries provide free access to the public.