The Records of the Adjutant General, 1917 to ____ (Record Group 407) hold several series of records about individual participation in the Army during World War I. Among them are the records of Commission of Officers in the Regular Army, National Guard, and Officer Reserve Corps, 1917 to 1940 (Entry 415A). This piece focuses on Harry S. Truman, who served with a Missouri National Guard unit, and Col. Harold E. Potter, who was appointed from the Officers’ Reserve Corps.

The forms vary slightly over time, but generally include:

The records also include a remarks section and discharge information that gives the officer’s rank, corps, date of discharge, and place of discharge. Because these are records of officers, there are no serial or service numbers for World War I service.

Harry S. Truman, appointed a first lieutenant on August 5, 1917, “in the service of the United States” remained with the Missouri National Guard throughout his World War I service.

On April 23, 1918, Truman was promoted to the rank of captain. On May 6, 1919, Truman, a captain in the Field Artillery, received an honorable discharge at Camp Funston (later Camp Riley), Kansas.

His contact was his mother, Mrs. Martha E. Truman of Grandview, MO. The form also includes his home address at 703 Ridge Arcade, Kansas City, MO, however, Truman did not live on Ridge Road and this may be a business address. 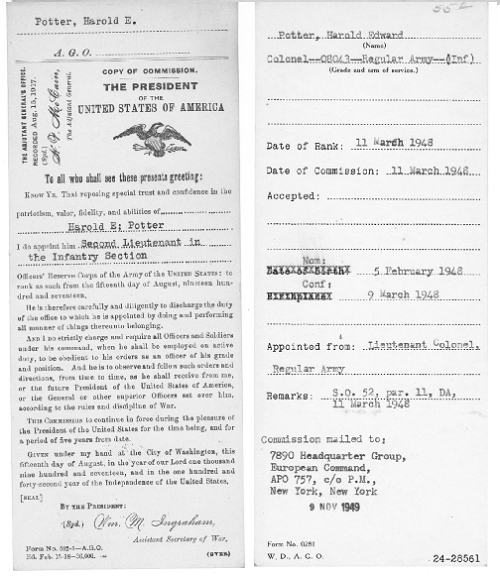 Truman served only for the duration of the war, but Harold Edward Potter served from 1918 to 1948. On August 15, 1917, Potter was appointed a second lieutenant in the Infantry Section of the Army’s Officers’ Reserve Corps.

Congress established the Officers’ Reserve Corps (ORC) as part of the National Defense Act of June 3, 1916. The ORC was intended to supply the military with civilian volunteers trained in military leadership and tactics. According to the act, in time of actual or threatened hostilities, the President could order members of the ORC to temporary duty with the Regular Army or other organizations that could be authorized by law.

Potter remained in the Reserve Officers’ Corps until July 1, 1920, when he was appointed a first lieutenant of Infantry in the Regular Army, where he served until 1948.

On March 11, 1948, Potter achieved the rank of Lieutentant Colonel in the Regular Army. His commission was mailed to 7890 Headquarters Group, European Command, APO 757, c/o PM, New York, NY. Although the series dates from 1917 to 1940, Potter’s records continue to 1948 because he received his first commission in 1917.

The number of cards for each person vary from one to multiple cards depending on how long the person remained in the service.

To request a search of the records, either write to RDT2, National Archives at College Park, 8601 Adelphi Road, College Park, MD 20740-6001, or send an email to Archives2reference@nara.gov. Include the name of the officer and his dates of service.

Next article: the Graves Registration index