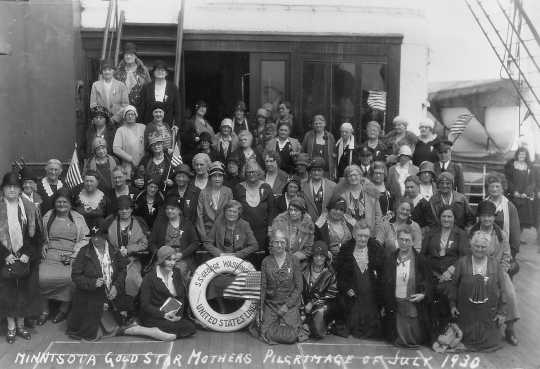 Minnesota Gold Star Mothers upon sailing to France, July 1930. Public Law 70-952 in 1929 authored the War Department to arrange for trips, designated as pilgrimages, by mothers and widows to the overseas graves of soldiers, sailors, and Marines who died between April 5, 1917 and July 21, 1921. Congress later expanded the eligibility to include the mothers and widows of men who were buried at sea or whose place of burial was unknown. Photo courtesy New Brighton Area Historical Society.

"Surely no one would want to deprive these mothers, who have buried their hearts with their darlings, of that little consolation to see that grave. To many, it might be her last wish before she joins her boy. ... The government can never repay us for our loss.”
-- Mathilda Burling, Richmond Hill, NY to General John J Pershing (November 1928)

After World War I, more than 30,000 American dead from that conflict remained buried overseas in U.S. cemeteries. The families of the dead found visiting the grave sites difficult; international travel was not as common as it is now and was often beyond the means of many people.

On March 2, 1929, President Calvin Coolidge signed Public Law 70-952 authorizing the War Department to arrange for trips, designated as pilgrimages, by mothers and widows to the overseas graves of soldiers, sailors, and Marines who died between April 5, 1917 and July 21, 1921. Congress later expanded the eligibility to include the mothers and widows of men who were buried at sea or whose place of burial was unknown.

These pilgrimages, which took place between 1930 and 1933, required a passport. The Department of State established the “Special Pilgrimage Passport” at no charge to the traveler. These documents were valid only during the trip in which the mother or widow participated.

The Department of State, however, issued passports only to American citizens, and numerous mothers and widows, as well as nurses hired by the Quartermaster General to accompany the women, who did not hold U.S. citizenship. For these women, the Department of State established a “Pilgrimage Travel Document” for which there were also no fees.

The applications for these alien travel documents for the pilgrimage are the only ones in the National Archives. The Department of State retains legal custody of post-1924 passport applications, which include the files for women who were U.S. citizens.

The women completed one of two State Department forms:

Form for Alien Making Application for a Pilgrimage Travel Document

These forms provide the following information:

• Name
• Place of birth
• Date of birth. Some women did not know their birth date.
• Height, color of eyes, color of hair
• Nationality
• Racial origin
• Signature. Many women put an “X” for their signature.
• Affidavit of an identifying witness

Most of the women applying for the passports were mothers, although the records included applications for widows and nurses. Each woman included four photographs, one of which was attached to the form.

Each form was signed by a clerk of a federal district or circuit court, state superior court or court of common pleas, or passport officer. 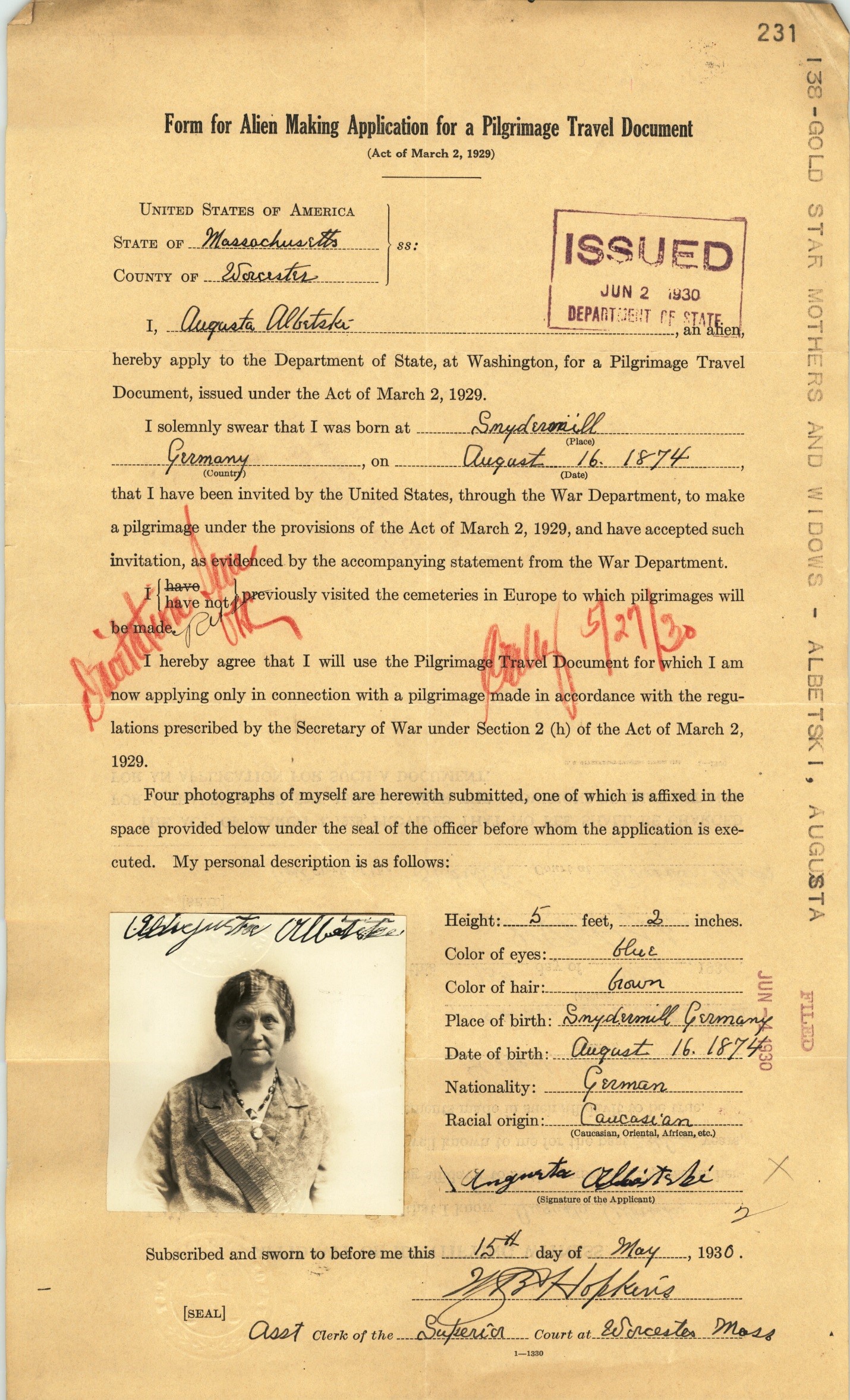 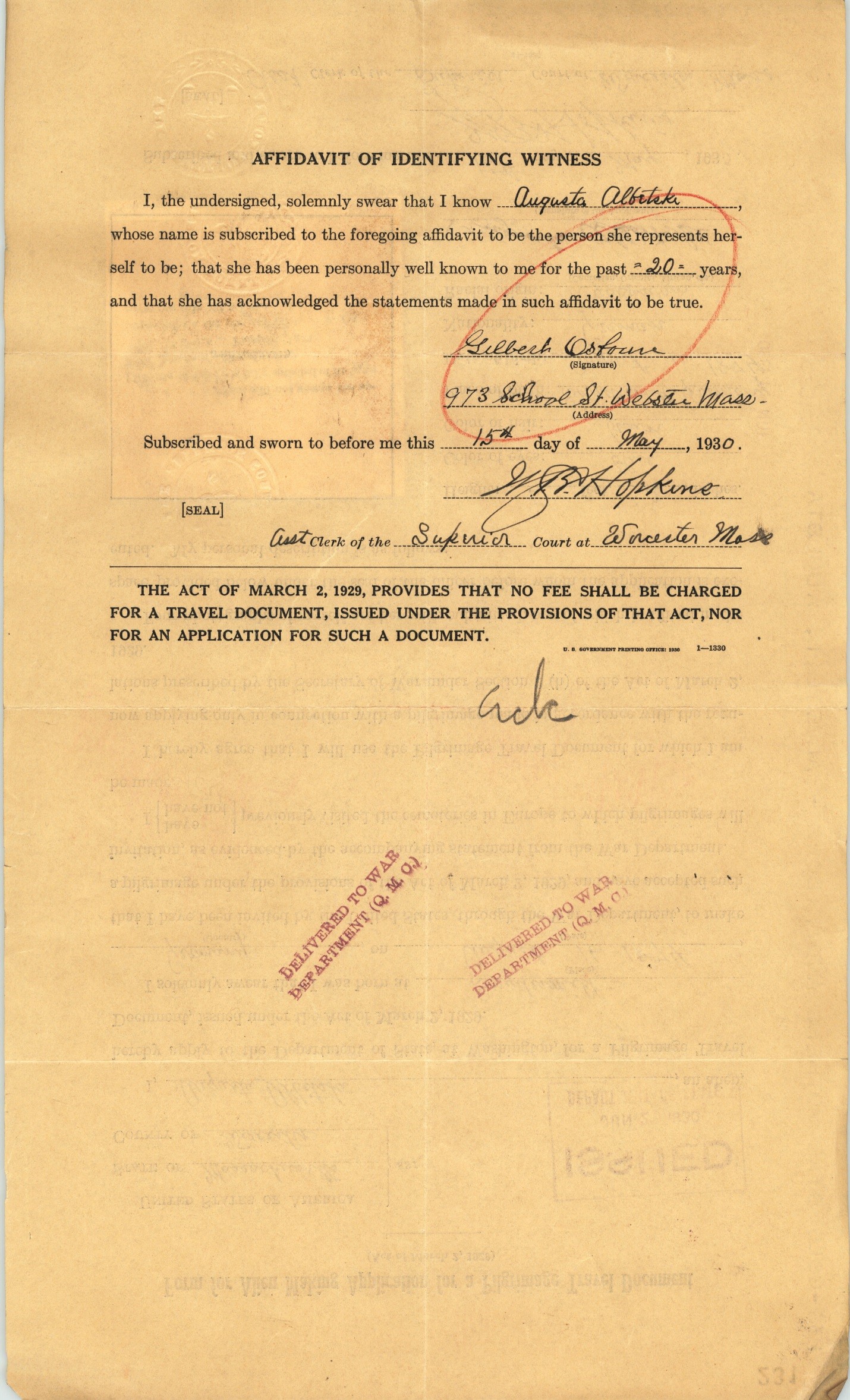 Concha Hatch, from Mexico, was a widow. 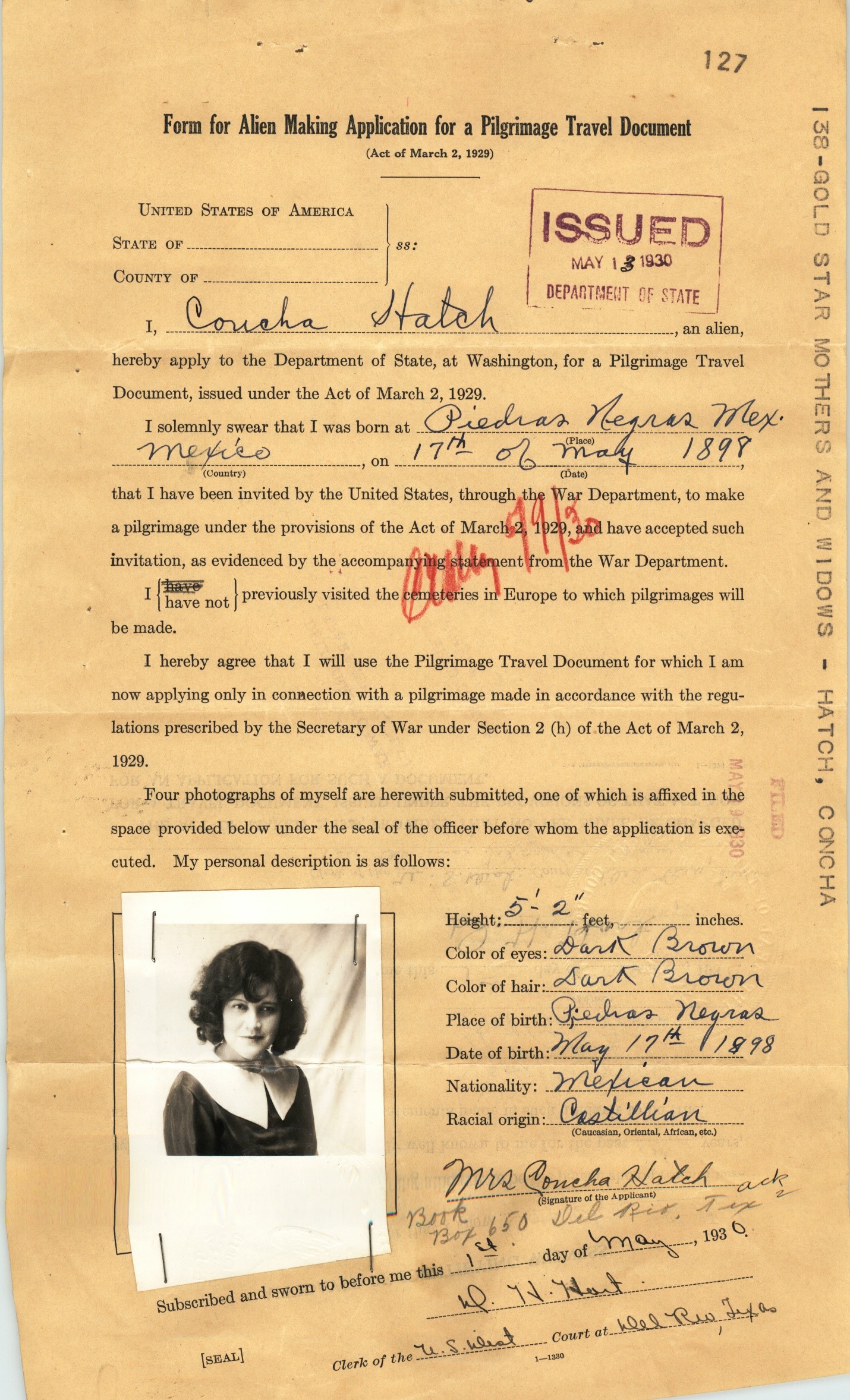 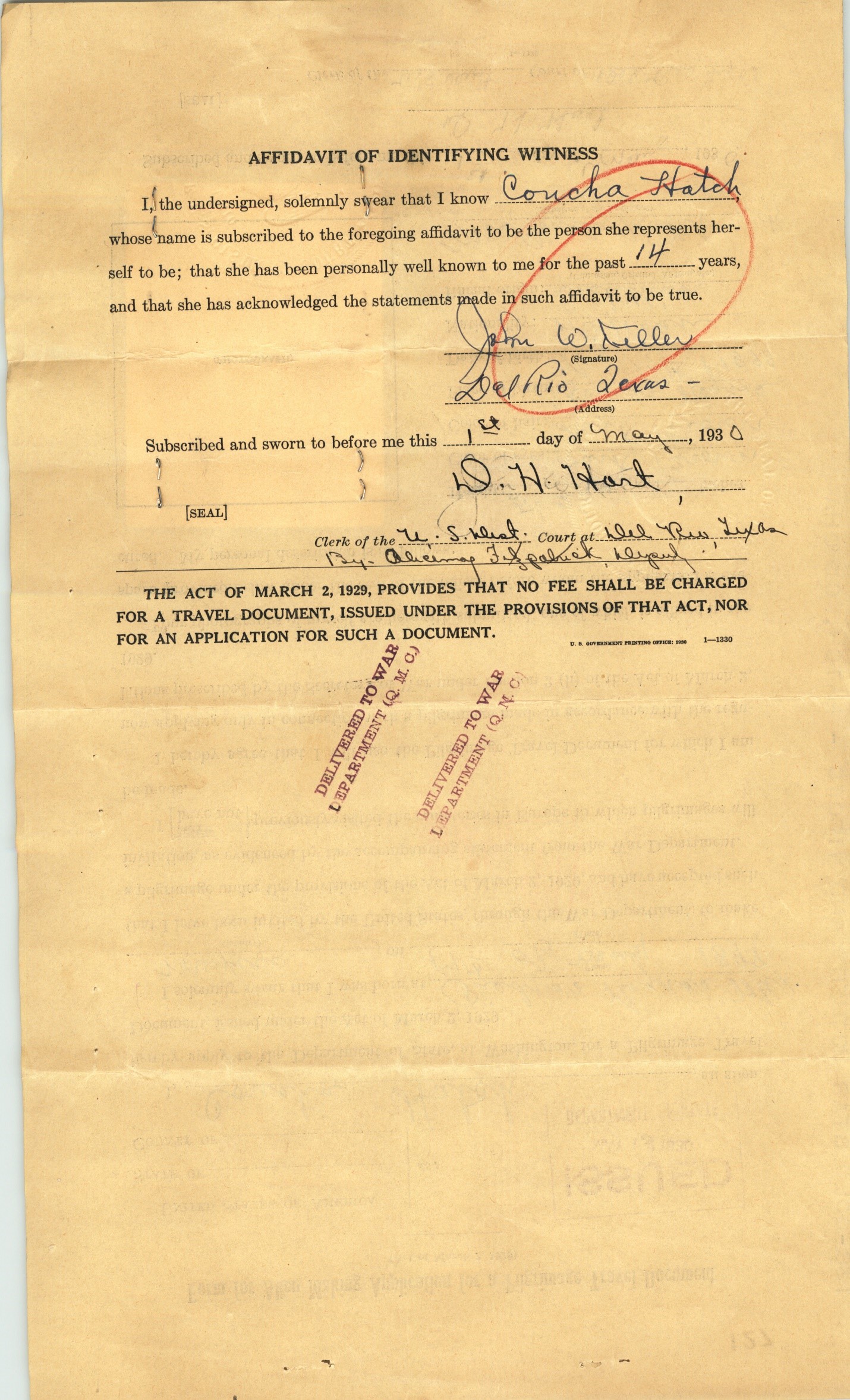 These forms include the above information as well as information about the husband’s or father’s naturalization, the woman’s occupation, her departure information (date, port, and ship she was to sail on), and her address.

Jennie Ramberg was scheduled to sail on the George Washington on July 24, 1930. 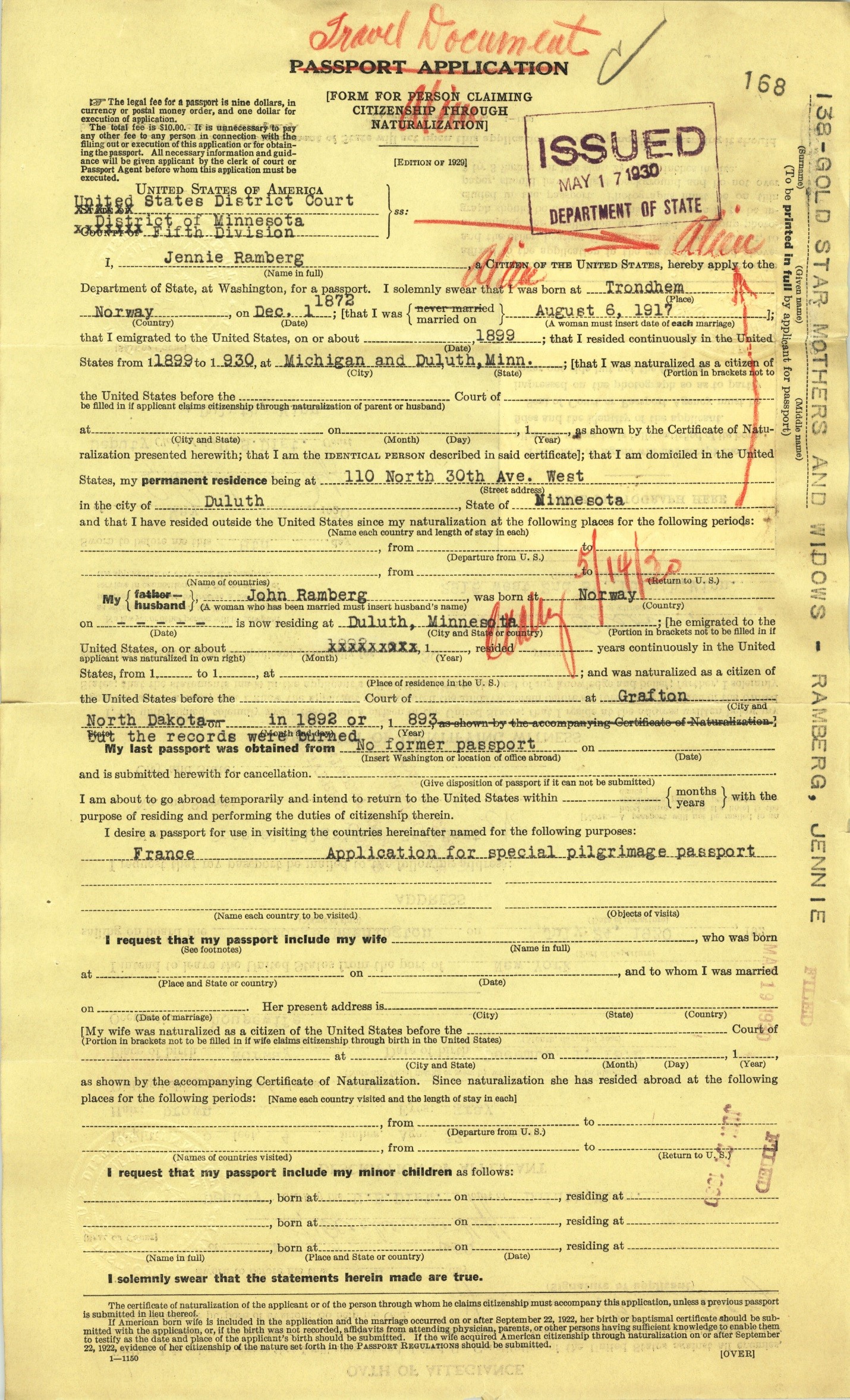 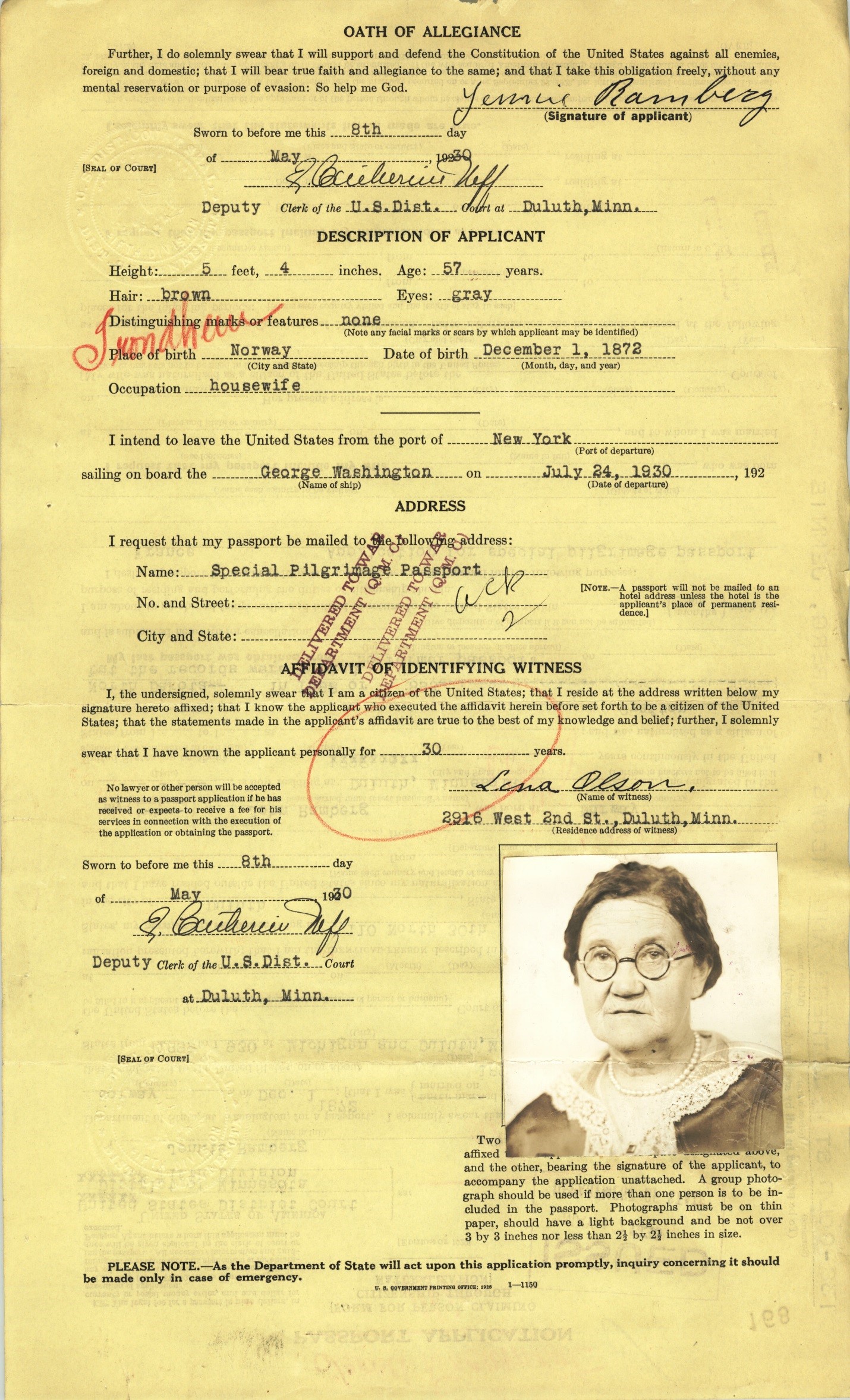 Some women could not remember if or when their husband was naturalized. Mrs. Anna Stein, born in 1866 in Russia, attached a note that read, “Applicants husband died about 40 years ago. She does not know what country he was born in, and does not know [unclear] anything about his
citizenship, . . .” 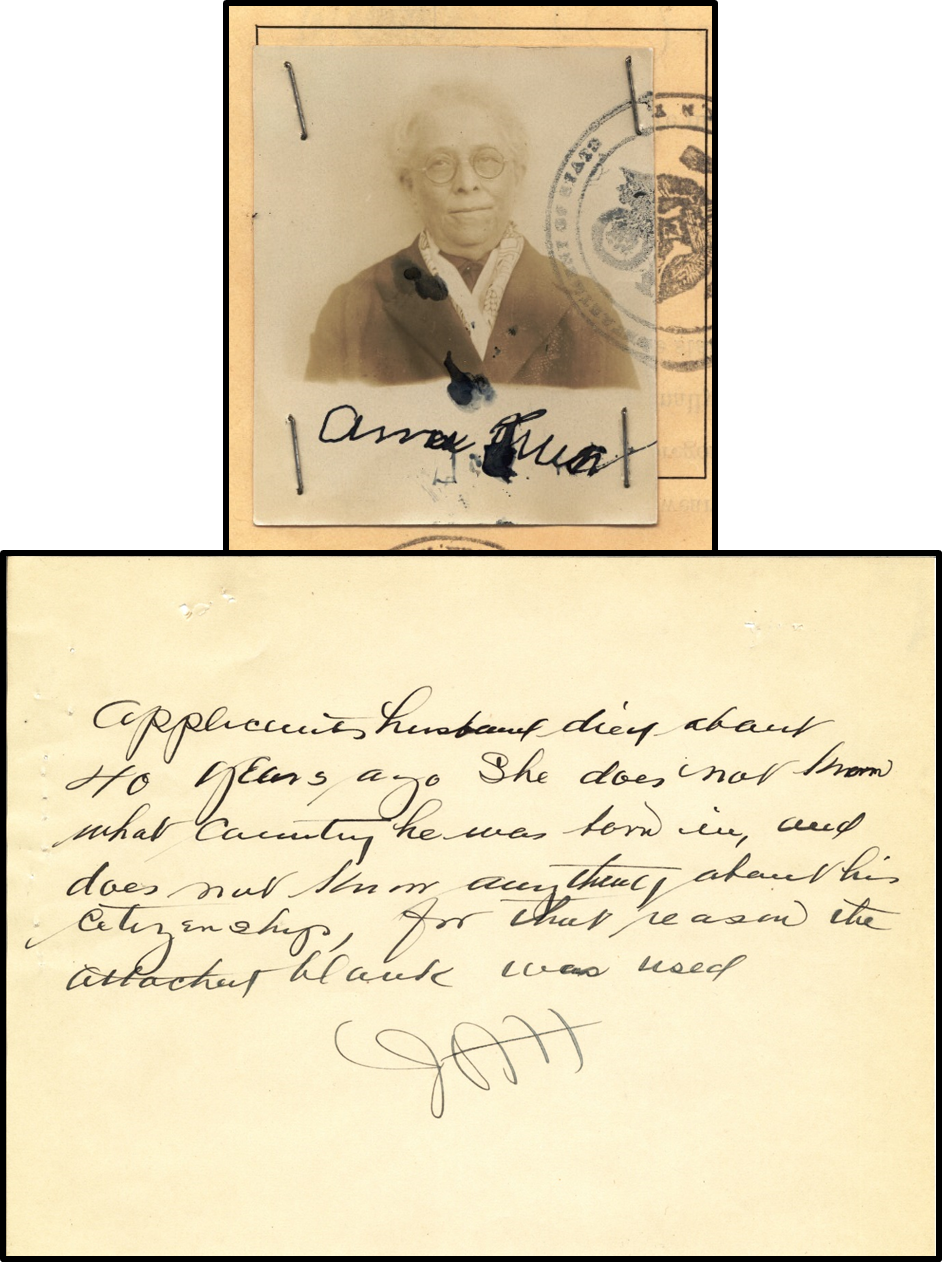 These records are part of Record Group 59, General Records of the Department of State, Entry A1-3001: [Passport Division] Decimal Files, 1910-1949, a very large series of records dealing with a variety of subjects relating to citizenship and passport matters.

To request a search of the records write to the Textual Reference Archives II Branch (RDT2), National Archives at College Park, 8601 Adelphi Road, College, Park, MD 20740-6001 or send an email to [email protected]