John Bernard Clise was born around 1899. John Clise served in World War 1 with the United States Army. The enlistment was in 1917 and the service was completed in 1918.

My great-great grandfather served in the US Army during WW1. He was a 2nd Generation American of German Descent whose Family Originated from Bavaria in the early 19th century. He was drafted and also wanted to show he wasn't pro kaiser. He proved himself as American as those of Either French of British heritage. 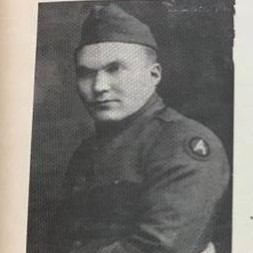 Frank DeMeis was born around 1897. Frank DeMeis served in World War 1 with the United States Arm . The enlistment was in 1917 and the service was completed in 1918.

"I was sent to the area of Coblenz Germany as a foot soldier".

Wounded by a grenade in France, developed blood poisoning from the shrapnel, after treatment at the aid station.

"I returned to my Battilian to find that it had been bombed out, and they all died. I was then sent to a hospital for further treatments away from the front lines".

Andrew C. Shagren born around 1895. Andrew Shagren served in World War 1 with the United States Army. The enlistment was in 1917 and the service was completed in 1918.

Andrew C. Shagren was the son of a Swedish immigrant father and Irish immigrant mother. He was my grandmother's favorite uncle.

He was drafted on Sept 22, 1917 in Philadelphia PA, and served in Company K of the 3rd Battalion of the 315th Infantry Regiment. He rose through the ranks quickly, being promoted to Corporal on June 14th 1917, then Sergeant on October 23, 1918.

By that time he had seen action in the Meuse Argonne offensive, Verdun Sector. This area was one of the toughest sectors of the Allied line, facing the indomitable German emplacements at Montfaucon.

When the offensive began in September, a memoir from a Company K soldier describes the sound and fury of a six hour artillery barrage that preceded the infantry assault. I imagine my great Uncle's thoughts as he prepared to face battle for the first time.

Submitted by: Carolyn Cathey Castelli {Researching this Veteran for my hospital and part of my nursing history research} 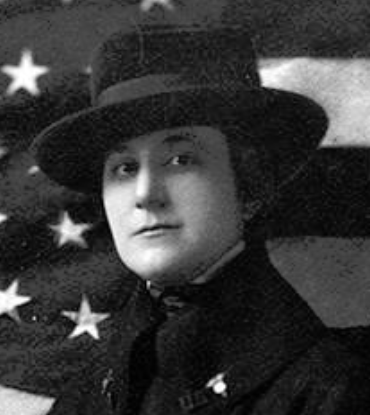 Adele Suyder Poston born around 1884. Adele Poston served in World War 1 with the United States Army. The enlistment was in 1918 and the service was completed in 1919.

She described this position as "the greatest challenge" of her psychiatric nursing career. The nurses, nursing aides, doctors, and occupational therapy aides at the hospital treated shell-shocked soldiers and those suffering from war neurosis. This base hospital, established under the direction of Thomas Salmon, MD, was the first psychiatric hospital to be relatively close (about 30 miles) from the front lines of a war. Poston said she could hear the sounds of battle--the "big Bertha's"--at the hospital, in a letter she wrote from France to Bloomingdale Hospital's Medical Director, Dr. William Russell.

Ken Kolbe served in World War 1 with the United States Army. The enlistment was in 1917 and the service was completed in 1917.

I know this is long but some of you maybe interested World War One a Hundred years ago.

Lets start in the beginning. He was born in Grafton to a, as best can be figured, married couple. But it was later learned that the father was already married in another state so she divorced him.

The young son was sent to his fathers parents near Lyndon Station WI who was a German immigrant that was in the Civil war and received a land grant to a property in WI. The grandparents raised him along with his half sister.

When his mother remarried and moved to about 3 miles south of Wahpeton he returned to help on that farm and grew up and attended what is now NDSCS but was only a single building, Main, north of Wahpeton. He was one of the early graduates from the school. His step father had only agreed to help raise him and would not get a part of the farm so he went to work for his mother's family's traveling harvesting company.

Along came WWI, the war to end all wars and he was in Canada and registered at the American Consultant in Winnipeg. Now begins the rest of the story.

Frank William Atkinson born around 1897. Frank Atkinson served in World War 1 with the United States Marine Corps. The enlistment was in 1918 and the service was completed in 1920.

Enlisted in the united States Marine Corps at Winston-Salem, NC taking the oath on March 20, 1918.

Served in the battle of Blanc Mont om October 3, 1918. Awarded the French Croix de Gere and the Silver Star. 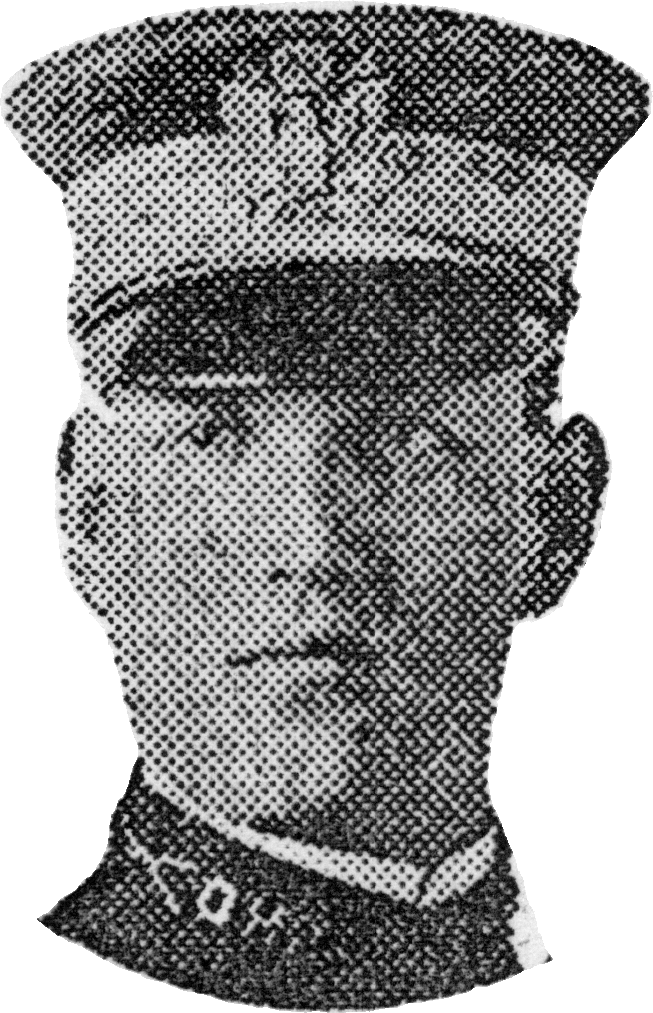 Arthur Samuel Houts born around 1880, Arthur Houts served in World War 1 with the United States Army. The enlistment was in 1901 and the service was completed in 1918.

Note: The information below is from a trunk found at my great-aunt's home.

His father, Samuel Houts, was from Illinois. His mother, Margaret, was born in Ireland.

In 1898, during the Spanish-American war, Arthur Houts enlisted as a private with Company I of the 19th Infantry Regiment. The Regiment went to Puerto Rico and stayed at Ponce for a year as an occupying force.

On Jan. 8, 1901, Arthur Houts enlisted in Company K of the 5th Regiment of the Ohio National Guard, based in Cleveland, OH. 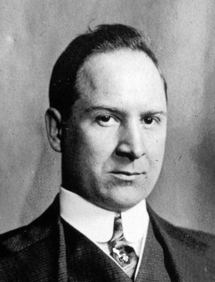 My father worked as a civilian employee of the Quartermaster Corps forwarding supplies to the front. They took over the Candler Building in Baltimore and also shipped material through Fort Holabird.

The Candler Building belonged to the Coca Cola Company founded by Asa Candler. They called it the "Battle of Coca-Cola."

That building still stands as far as I know on Market space near the inner harbor.

I still have a badge my father wore. 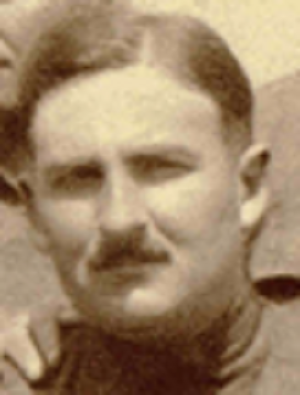 John B. Kane born around 1893. John Kane served in World War 1 with the United States Army. The enlistment was in 1917 and the service was completed in 1919.

My grandfather, John B. Kane, an architect who lived in the Philadelphia area, died when I was twelve years old. He never discussed his time in the service during WWI.

When my mother was an adult, she discovered a book he wrote to her when she was ten years old. The "little story" was typed on fragile onion skin paper, written as though he were telling his young daughter stories about his military service. We speculate that he wrote the book because WWII was just starting, and he couldn’t imagine how the leaders would allow such monumental sacrifice to occur again.

WWI was the first time Americans fought overseas, consequently resulting in the formation of the Graves Registration Service. His drafting experience was put to good use by designing and plotting the first of many American cemeteries in France.

Charles C Peterson born around 1900. Charles Peterson served in World War 1 with the United States Army. The enlistment was in 1917 and the service was completed in 1922.

On July 29th 1917 I intered the U.S.N.G. I was only a kid not old enough to belong to the Army, but I enlisted anyway in the 1st Ala. N.G. Co. D. from Fort Deposit Ala. Not knowing anything about the Army, I was put in a training camp at Camp Sheridan Montgomery, Ala. for 2 weeks training. After the 2 weeks training I was trained for a soldier and was then sent back to my company and was assigned to a squad of 7 pvts. And a corporal in charge. On Aug. 5 1917 the Ala. N.G. was mustered into the Federal service and about 75 men from Co. D. 1st Ala. N.G. was transferred to Co. D. of the 4th Ala. N.G. I happened to be one of the men in the 75 that were transferred. This made Co. D. 4th Ala. N.G. 250 war strength. The company was then divided into 4 Platoons. 1,2,3,4. Later the 4th Ala. N.G. was changed to the 167th Infantry and put in the 42nd Div. which was named the “Rainbow Division.” 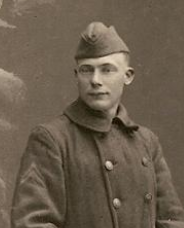 John August Kiecker born around 1890. John Kiecker served in World War 1 with the United States Army. The enlistment was in 1917 and the service was completed in 1917.

John August Kiecker served as a corporal in the American Expeditionary Force of the U.S. Army under General John J. Pershing. Although I have few records of his service, the following is an excerpt from a letter he wrote to his nephew, John Lietzau, (my uncle) on April 20, 1919 from Quernignyrot, France.

"Well, John, I am still in France but soon will leave for Germany where we'll enter the occupation troops and therefore have to hold our end down until everything is settled. The first peace treaty is supposed to be signed by the 25th. Inst. probably the soldiers will be lessened according to peace negotiations. Just think today it is Easter sunday and no eggs for today. Eggs, milk and sweet deserts you don't get in the army. Yesterday we had a beautiful day, sunshine all day, mind you. This occurs not often in France. I must tell you that I am teaching school here in the army and therefore am not drilling at present. Four boys from our company got a discharge from the Army and now be home or on their way home."

" I am feeling hale and hearty and would be ok if they send us back to the states. "

"The frogs are shearing their sheep now consequently they are looking for warmer weather in the near future. By frogs, I mean the french people. You can rest assured it will be a great day for us boys when they turn us loose with a honorable discharge from the services of the U.S."