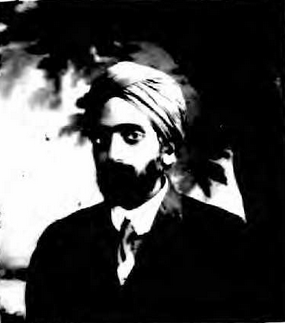 Singh enlisted at ERC Fort Douglas, Utah on November 19, 1917. He was assigned to the Student Army Training Corps at the University of Minnesota. Private Singh did not serve overseas and was honorably discharged on December 14, 1918.

After the war, Singh returned to Stockton. In 1920 Singh applied for a U.S. passport to go to India for its southern climate on the advice of his doctor to help an infection of his lungs. 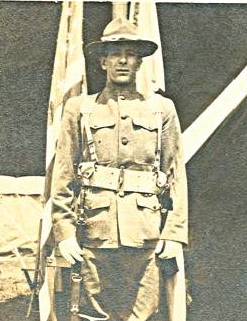 OUR FATHER, CHARLES EDWARD DILKES, kept a DAILY DIARY of his military service. His memoir, based on this diary, begins with the night of him leaving America. He wrote: "I wish you could share my anticipation with me when on August 6, 1917, at 6:30 p.m. all men were assembled with full field equipment and at 7:00 p.m. we marched through the huge iron gates...full of spirit and hope." Finally arriving in Hoboken, New Jersey, he boarded the transport Finland, dropped down the bay off Tomkinsville, New York, while the "throbbing of engines acquainted us with our departure from the shores of America." It did not take long for the situation to change. A few weeks later on August 20, 1917, his fleet was within the danger zone. "I was coming on deck when a big explosion occurred, shaking the ship...The Captain from the bridge shouted out, "Why the hell don't you shoot that submarine!...Immediately our fore gun blazed away sending forth its deadly shell..."

When the U.S. declared war on Germany in April 1917, our father’s patriotic spirit rose within him; he volunteered on the 1st of May. With an engineering background, he was assigned to Company F as a combat engineer in the 1st Division of the American Expeditionary Forces (AEF) and fought under the command of General John J. Pershing. He earned the rank of sergeant, and was consistently called upon to lead his men to build first aid stations, communication trenches, and stables; to repair roads and parapets of the trenches; and to prepare the terrain for battle. This work was often done while he and his men were under enemy fire, which often meant putting down the shovel and picking up the rifle. His recordings of daily and significant enemy encounters stand out not only as consistent with history, but offered great personal insight into the rigors of war. He did not complain. He did not shirk his duties EVER in War, in his work, or with his family. 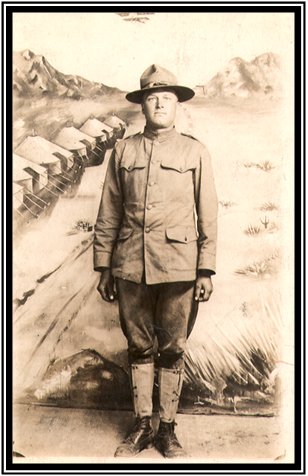 Fred Meyers born around 1896, Fred Meyers served in World War 1 with the United States Army. The enlistment was in 1917 and the service was completed in 1919.

Fred Meyers, a 20 year old farmer from Britton, South Dakota, enlisted in the Army on April 18, 1917. Fred Meyers was assigned to the 59th Depot Brigade 1st S. Dakota Cavalry. In September of 1917 Fred was sent to Boot Camp at Camp Dodge, Iowa. Sometime in October of 1917, he was sent to Camp Cody near Deming in New Mexico for training. Fred Meyers was there until June 1918. In June he traveled to France by way of England to be among the first combat troops to fight in the war with Germany.

Sometime around September 14 or 15, 1917 Fred Meyers left Britton, South Dakota for Boot Camp at Camp Dodge in Iowa. His travel took him to Omaha, Nebraska. Fred probably arrived at Camp Dodge on or about September 17, 1917. It is not known how long he was at Camp Dodge, but it can be assumed that this was his basic military training. He probably learned Military Order and Discipline, i.e. bed making, marching, rules and etc. 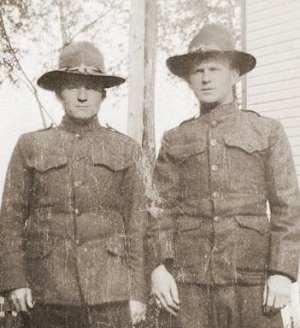 Chester Allen Bower born around 1894, Chester Bower served in World War 1 with the United States Army. The enlistment was in 1917 and the service was completed in 1919.

My maternal grandfather was Chester Allen Bower, and his brother, Charles Edward Bower (called Charlie), was my great-uncle. They were born in New Oxford, Pennsylvania and both served in the Great War.

Charlie was a Sergeant with the U.S. Army Medical Corps, and his dates of service were March 26, 1918 to October 20, 1918. He died of the influenza pandemic while at Camp Mills, Long Island NY; he was just 20½ years old. 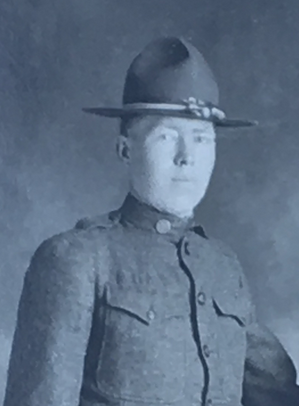 Joshua Henry Bates born around 1895. Joshua Bates served in World War 1 with the United States Army. The enlistment was in 1917 and the service was completed in 1918.

Joshua Henry Bates' 22nd birthday was on the day Wilson declared war. He was a one-room teacher/principal in Wanship, Utah. In September 1917 he started the new school year, worked one week, and received his letter to report the following week.

Training began after a long train ride to Camp Lewis, Washington, a camp created for the AEF. He trained, studied French, recorded health reports for the 347th Machine Gun Battalion at the camp hospital, and became a private first class. After a camp illness in March 1918, they continued training.

By July 4, 1918 the 91st Division was in New York City, shipping off to England and then to France for more training. The full history of the Battalion can be read in History of the 347th Machine Gun Battalion by John U. Calkins, Jr.

Joshua serves as a messenger for the officers. Their battalion and others held the line against the German forces in the Meuse-Argonne, and received a letter of relief on 3 October 1918. 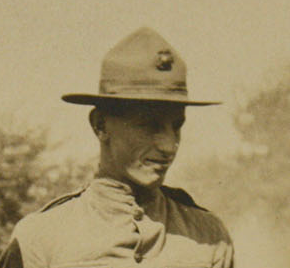 Everard J. Bullis, Sr. was born around 1896. Everard Bullis served in World War 1 with the United States Marine Corps. The enlistment was in 1917 and the service was completed in 1918.

Everard J. Bullis was my Dad, who enlisted in WW1 from St. Paul, Minn. He enlisted in the Marines and arrived in France on May 7, 1917.

June 8, 1918 he entered the fight in Belleau Wood. In July he went over the top with the 5th Marines in the St Mihiel Drive.

Later, during the battle on the Champagne front, he was wounded in his right lung. I, Robert G. Bullis, have that bullet, his medals and memorabilia, and most of the original letters to and from his parents and 4 sisters during his service. 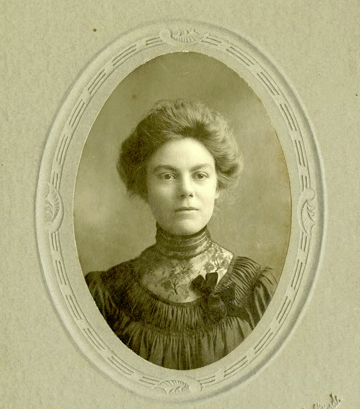 Mary Alice Lamb served in World War 1 with a non-government service organization. The dates of service are: Known 1918-1928.

“Those who go forth ministering to the wants and necessities of their fellow beings experience a rich return, their souls being as a watered garden, and a spring that faileth not…”

Tucked away in the South West corner of Miami County, Indiana is the small community of Amboy where in 1844, the first Friends Worship service was held in Miami County and six years later, a log church was erected at a location that would later be next to Amboy Friends Cemetery.  Until a school was built in 1872, the church doubled as a school.   In 1867, the Panhandle Railroad was completed through Miami County and the small town of Amboy was platted as the location of the train station.

When, in 1871, Benjamin B. Lamb laid an addition to the original Amboy platt, his son Ezra must have been living in the area, for on July 28, 1878, Ezra Lamb and his wife Eliza were holding a beautiful baby girl in their arms whom they named Mary Alice.

As she grew, Mary Alice probably attended school in Amboy at a building known as The Academy.  The years flew by and soon Mary Alice Lamb was attending school at Earlham College in Richmond, Indiana.  She graduated in 1901 with a teaching degree.  By this time, she was a young woman, 5’4 1/2” tall, sporting brown hair and brown eyes.  Known to her friends as Alice, her first teaching job was at Stit School, four miles from the home in which she grew up.  Every morning she would drive to school in a two-wheel cart pulled by a horse.  If it rained, she would wear water proof garments or pull into the nearest barn lot until the rain let up.  Sometimes, if the weather was very bad she would stay with the Stit family, on whose land the school was located. 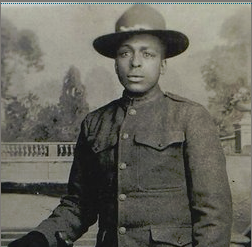 Wayne Miner was born around 1890. Wayne Miner served in World War 1 with the United States Army. The enlistment was in 1917 and the service was completed in 1917.

Word has been received here of the death in action of Private Wayman Minor, colored, of this city, in France, on the morning of November 11, just three hours before the signing of the armistice.

Minor went with the first colored group of drafted men for this vicinity and crossed to France after a period of training. He took part in several battles and the irony of fate made him a victim just before hostilities ceased.

Wayman Minor was the son of Mr. and Mrs. Ned Minor, of near the Drum and Monkey mine. He also leaves a wife, she making her home with her mother in Kansas City. 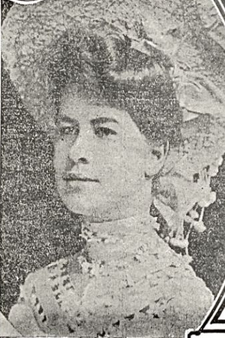 Minnie Frances Antrim born around 1886, Minnie Antrim served in World War 1 in the manner described below.

Minnie Antrim was from a well-known Miami County family.  Her paternal grandfather had been born in Clinton County, Ohio and at some unknown date had migrated to Cass County, Indiana. When her father, the esteemed Nott Nobel Antrim, was ten-years old he was orphaned.  Nott lived with an older brother for two years and then, striking out on his own, worked his way through school and became a lawyer.  Later he was elected to the state legislature.

Nott married Minnie’s mother, Marilda Adkisson, in 1875.  Minnie’s brother, Nott W, was born in 1881 and Minnie was born in 1886.  Tragically in 1894 Marilda Antrim died. Nott Nobel remarried and the children were raised by their step-mother, Ida Bell Armstrong Antrim.

As a young woman, Minnie taught music while living in her father’s Peru Township home.  Her involvement in civic affairs is first noted in June of 1917 when she is listed as one of the two officers who were registering women to vote in Miami County Indiana.

But by 1918 the St Louis City Directory lists Minnie as employed as a stenographer with Mallinckrodt Chemical Works. The Peru paper, in September of that year, when reporting of the upcoming event involving the Liberty Bond Airplane, refers to Minnie as being “stationed at St Louis”.   At this time, no proof of a military involvement has been found for Minnie.  So, what was she doing in St Louis at the Mallinckrodt Chemical Works?

Joseph Eli Hiner was born around 1895. Joseph Hiner served in World War 1 with the United States Navy. The enlistment was in 1917 and the service was completed in 1920.

Joseph Eli Hiner grew up in the same small town in Indiana in which he had been born. He was the third child of Asa Hiner, and Asa’s second wife, Georgia Wilson. Joe, who was born in 1895, was named after his grandfather whose father John had emigrated from Germany in 1770.

John Hiner had settled in Virginia and married a woman named Magdalena, whose grandfather had emigrated from Switzerland. John and Magdalena had twelve children. They named their fifth child John. He was born in Virginia in 1781.

The younger John had served in the Virginia Militia. His wife’s name was Rachel. His occupation was both that of a blacksmith and a farmer. The family were devout Methodists.

Joseph Eli enlisted in the U.S. Navy in April of 1917, shortly before his country declared war.

Harry Healy Denning born around 1894. Harry Denning served in World War 1 with the United States Army. The enlistment was in 1917 and the service was completed in 1919.

After completing training at Plattsburgh in the 5th company New Englanders, he sailed over to France early January 1918. He was a 2nd Lt and saw time in Alsace and then Soissons in July 1918.

Whilst leading the company he was shot in the back by a sniper and was sent to the hospital for surgery.

Later joined a unit as new recruit trainer and adjutant. Still trying to find more info on him.