Mary Melinda Swain born around 1893. Mary Swain served in World War 1 with the United States Army . The enlistment was in 1918 and the service was completed in 1919.

The facts around Mary’s life seem to be full of contradictory dates and locations when the records are examined. This biography contains the author’s best interpretation of the conflicting data.

Mary Melinda Swain was born in Dublin, Ohio in the fall of 1893. Her mother was Rose Grogan, who was born in Illinois as the child of Irish Immigrants. Rose married Mary’s father, John Swain, and they had five children. Mary’s mother passed away when Mary was five years old. Although the Swain family were Ohioans, in the 1880 census John was with his parents and siblings in Grundy County, Illinois. This was the same county in which Rose was living with her family.

After Rose died, John married a woman named Anne who was an immigrant from Sweden. When Anne died he later married a widow named Belle. John died when Mary was 39. Although it has not been determined exactly when Mary, her parents, John and Rose, along with her siblings, all migrated to Indiana, it was sometime before her mother’s burial in 1898, as Rose’s grave is in Cass County. The family was living in Deer Creek Township, Miami County, Indiana by 1900 in the little cross roads called Bennetts Switch. Deer Creek Township, named after the Deer Creek which runs through it, is in the Southwest corner of Miami County, with Howard County bordering it to the South and Cass County on its Western border. Bennetts Switch had one of the two post offices in the township, and Mary’s father worked for the post office. 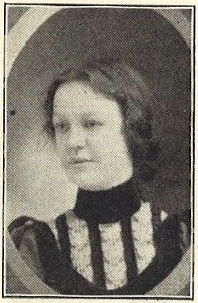 Mabel Munro born in 1884. Mabel Munro served in World War 1 with the United States Army. The enlistment was in 1918 and the service was completed in 1919.

Mabel Gray Munro was born October 28, 1884 in Detroit, Michigan. Her father was from Canada and the son of Scottish immigrants. Her mother was an Irish immigrant. Her father was an engineer on the rail road. There were four other children in her family. Two of her brothers would become dentists, the third brother worked in sales and her sister would join her in the profession of nursing. One of her brothers would also serve in WWI.

In 1888 the family moved to Chicago, but just prior to Mabel’s sophomore year the family moved to Peru, Indiana. Mabel became a graduate of the 1901 class at Peru High School. After Mabel finished high school, her father sent her to Indiana University. She attended classes there starting in 1902 and continuing through 1904, returning for more classes the summer of 1907. While living in Peru, she taught school for seven years. She began in “the country school” where she taught for one year and then moved on to “the grades” where she taught for two years. After that she taught mathematics at Peru High School.

Then, in 1910, Mabel made a career change. She headed back to Chicago, with all its tall buildings and city lights, and its loud, noisy, pungent smelling crowds, chattering in a multitude of languages. She enrolled in the Henrotin School of Nursing which was located near Old Town. The Chicago Policlinic and Henrotin Memorial Hospital were under the same management and established a training school for nurses in 1891. 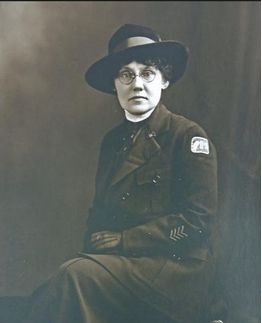 Harriett Louise Carfrae born in 1879. Harriett Carfrae served in World War 1 with the Red Cross. The enlistment was in 1917 and the service was completed in 1920.

Born Ninety miles south of Lake Erie at Norwalk, Ohio on January 10, 1879 to immigrant parents, Harriett Louise Carfrae moved west with her family to Miami County, Indiana before her first birthday. Her father, James, was Scottish and worked as a boilermaker for the railroad. Her mother, Margaret Dillon Carfrae, was Irish, but arrived in the United States by immigrating first to Canada.

Harriett had curly, dark hair, light eyes and wore round wire glasses. It can be guessed that she was not very tall from the average size of others with the same nationality of her parents.

When she was 18, Harriett was part of the leadership of a Christian youth organization named, The Christian Endeavor, which was involved in the temperance movement. She was known as Hattie by her friends.

When she turned 21, she moved to St Louis in order to attend the Baptist Sanitarium Hospital School of Nursing. She graduated with 17 other women in 1903. The school of nursing was a two-year program which enrolled its first students in 1895, indicating Harriet was part of the school’s seventh graduating class. At some point, the nursing school expanded to a three-year program. 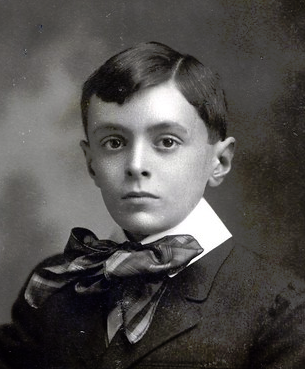 Branton Holstein Henderson, Sr. was born around 1897. Branton Henderson served in World War 1. The enlistment was in 1917 and the service was completed in 1918. 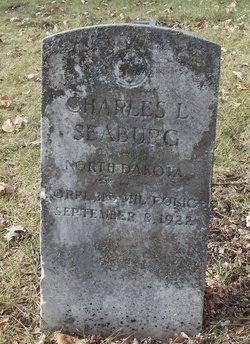 Charles Leonard Seaburg born around 1890. Charles Seaburg served in World War 1 with the United States Army. The enlistment was in 1917 and the service was completed in 1919.

Edward R Rosenau born in 1894. Edward Rosenau served in World War 1 with the United States Army. The enlistment was in 1918 and the service was completed in 1919.

After the war he married Rose Wahl. He and Rose farmed near Eldridge, North Dakota where they raised their three children.

Ed was a member of the American Legion and a life member of the Veterans of Foreign Wars Post of Jamestown, North Dakota. He died Sep. 1, 1986. 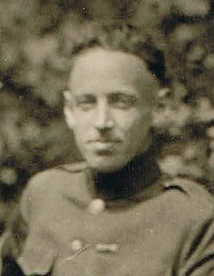 Donald Chapman born around 1889, Donald Chapman served in World War 1 with the United States Army. The enlistment was in 1917 and the service was completed in 1919.

The story of Donald Chapman

In November 1917, Donald Chapman, 28, wrote to his mother, Ella, living in Ithaca, New York, “I have not been called yet.” He was a prolific letter writer to his sister, Mildred, and his mother.

He had expected to be drafted at any time. The Selective Service Act had been enacted on May 18th, 1917.

In the meantime, he was working with automobiles in Detroit, Michigan, and thinking ahead. “If I do not have to go to war,” he wrote, “I can make a lot of money in the spring. Second-hand cars will sell like hotcakes, as they are cutting down on the output of new ones.”

On December 15, he’d taken advantage of an “opportunity to enlist at my trade as auto mechanic… in the Ordinance Dep.” of the Third Division. 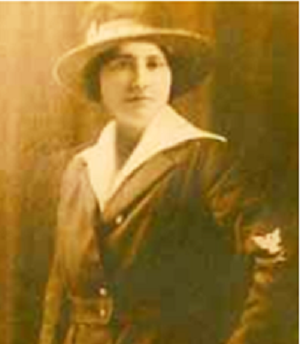 Annie Frasier Norton born in 1893. Annie Norton served in World War 1 with the United States Navy. The enlistment was in 1918 and the service was completed in 1918.

“We Conquer by Degrees”

Yeoman (F) Second Class Annie Fraser Norton, (April 10, 1893 - October 10, 1918), is remembered in New Hampshire as the first woman from the Granite State to give her life for her country, which may not be entirely true. Be that as it may, she was without a doubt a breaker of glass ceilings and remains to this day a beloved icon in the in the town of Derry’s pantheon of heroes. The unseemly debate surrounding her demise is centered on the military status of the Army nurses that perished before her. They are currently seen as military contractors and thus, rightly or wrongly, not eligible for the accolades reserved for those who died as sworn members of the armed forces.

This controversy should in no way distract from the enormous contribution Annie and her fellow “Yeomanettes” made to the ultimate victory of the United States and the Allies during the First World War. As we examine Annie’s upbringing, it would seem that service to a greater good was somewhat of a tradition in the Frasier family. 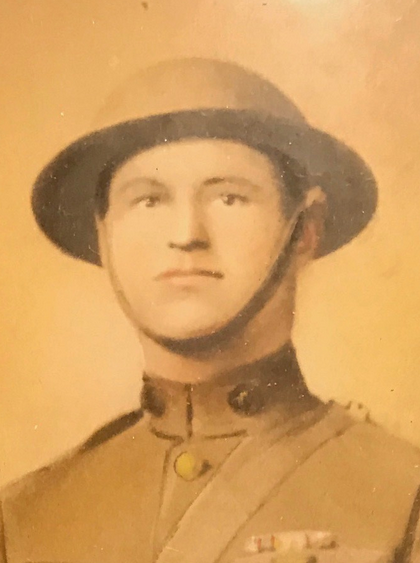 Peter Harry Marvrias' born around 1887, Peter Marvrias' served in World War 1 with the the United States Army . The enlistment was in 1917 and the service was completed in 1919.

My grandfather, Peter (Pete) H. Mavrias', died when I was four. My recollections of him are vague, but I remember him as a kind, fun loving person. Growing up, two pictures were hung in my grandmother’s bedroom: one a formal portraiture of Pete in his World War I Army uniform; and the other a showing a kneeling soldier looking up at Columbia, the female representation of the United States. In her right hand was a sword resting on the soldier’s right shoulder. At the top an inscription reads, “Columbia Gives To Her Son The Accolade Of The New Chivalry Of Humanity”. At the bottom in hand written scrip was “Peter H. Mavrias, Pvt, Co. H. 167th Inf.”, followed by the words “Served With Honor In The World War And Was Wounded In Action”, signed “Woodrow Wilson”.

Pete Mavrias’ life was an adventure, not unlike that of hundreds of thousands of other early 20th century immigrants beaconing to Lady Liberty’s call ‘…give me your tired, your poor, your huddled masses”. He was born August 4, 1887 in Vervena, Greece. Pete traveled alone to the United States, knowing that America meant freedom and opportunity. It was 1903. He was sixteen.

Four years later Pete headed west, wanting a piece of the action associated with the opening of a massive open-pit copper mine and mill in the remote wilds of eastern Nevada, near the towns of Ely and McGill. Over the next decade Pete became a successful general store clerk servicing the miners. On March 13, 1914 he achieved his dream of becoming an American citizen.

Submitted by: Kenneth Abt {great grandson}

Franz Joseph Abt was born around 1892. Franz Abt served in World War 1 with the Austrian Army. The enlistment was in 1912 and the service was completed in 1918.

Great grandpa was in Austrian Army. In 1914 when war broke out he was mad. He only had 3 months till out of service.

He hated war. But was an engineer and sharpshooter. He was forced to test for the newly introduced machine guns. When asked what to do if barrel hot and no water, what do you do? He said jokingly, pee on it. Thus he was sent to train for machine guns. He could write his name with it.

He was sent to train the Turkish gunners who later were at Gallipoli. He was at the highest trench in the Alps and ultimately in Russia when the commies took over. He survived by hiding in a Cemetery eating food left for the dead, a Russian custom.

After the war fell apart he and two buddies made it home, walking and riding in a gypsy ox wagon.

He loved American movies. He later owned a grocery store that was flattened by the Russians in WWII. He later helped Jews escape.

I also had 2 Texas relatives in American army. But don't know much about them.

Lewis Tallman Wilson born around 1895. Lewis Wilson served in World War 1 with the United States Army. The enlistment was in 1917 and the service was completed in 1919.

He left for France on 14 June 1917, assigned to the First American Army and was in combat at the following locations in France. 16 September -22 October 1918, Le Claire, Chattencourt, 1st Merthomme, Marre, Charny, Cumiers, Beis-De-Ferges, Gerscourt.

After the war he returned home to Rumson N.J., married and had two children. He worked as a clerk for a real estate firm, he was also a Boro Councilman for Rumson. He was a life long member of the Rumson Fire Company joining in 1913.

He died abruptly of a stroke in 1938 and was buried in Fairview Cemetery, Middletown N.J.