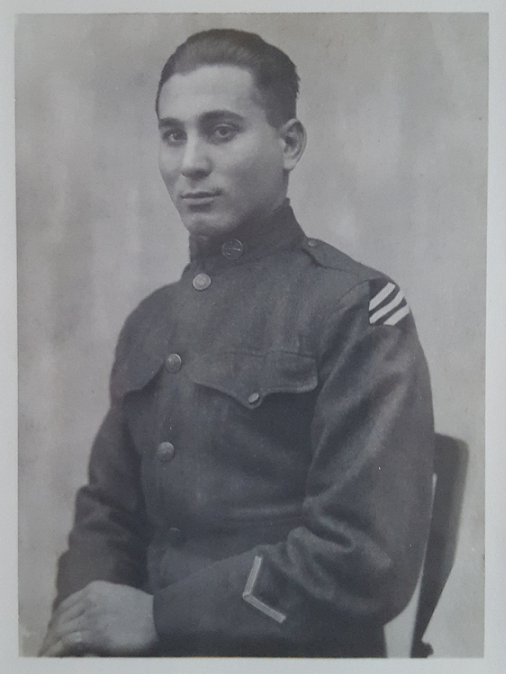 He received his Army training at Camp Green, which was established at Charlotte, North Carolina in 1917. The 3rdDivision, currently known as the 3rd Infantry Division (Rock of the Marne), was first organized and assembled at Camp Green several months before joining the Doughboys already on the Western Front. He told me it wasn’t always a pleasant experience being an Italian immigrant and training in North Carolina, but he knew the call to fight for peace, democracy, and economic stability was greater than any personal sacrifice made during the process of attaining these common objectives of that time and place in history.

His unit, Machine Gun Company, 7th Infantry Regiment, is credited with WWI Campaign Participation at Aisne Defensive; battle of Château-Thierry; Champagne-Marne; Aisne-Marne; St. Mihiel; and Meuse-Argonne during his tour of duty in France. He took great pride in his WWI Service and kept his Machine Gun Company Unit Roster safely stored and frame protected until his death on 1 May, 1984. The framed WWI Unit Roster was given to me by my paternal Grandmother, Adele Iossa, while I was on active military duty. It has been proudly displayed in his honor on the living room wall of my home for many years. 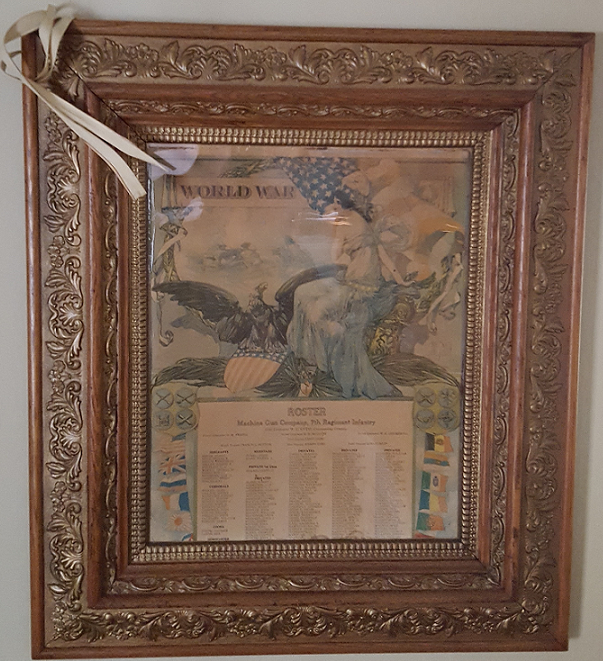 Upon his return from the Great War, he pursued a vocation in the crafts as a brick mason. Shortly afterwards he married my Grandmother, also an Italian immigrant, originally born 2 November, 1902 in Nola, Italy. Together they raised a family of four Sons (Peter, Ralph, Angelo [Jr.], and Frederick) and two Daughters (Francis and Jenny) in Madison, NJ. My Grandfather was especially proud of his Italian heritage, but placed his American Citizenship and WWI Veteran Status on a pedestal. As far back as I can remember he had an American Flag displayed on the front porch of his home and participated in Veterans Day and Memorial Day parades and activities. And although my Grandparents spoke in the Italian dialects of their place of birth, the English language was spoken in their home.

As I look back at my own life, it is apparent that my Grandfather’s sense of commitment to the United States and its Allies during WWI had a very strong influence on each successive generation of the now extended Iossa Family. His sense of duty, selfless service, and dedication to Family, Faith, and Country was the cornerstone of his home and a manifesto for how he raised his children. He worked hard to provide for his wife and family and in the process was instrumental in building schools throughout New Jersey between the World Wars and the Baby Boom years, and like many immigrants of his day, left a proud legacy of brick and stone that still exist across the Garden State.

His values and example were emulated by each of his children during the atrocious years of WWII. Three of his four Sons honorably served in the United States Army (Peter, Ralph, and Angelo Jr.) during the Second World War and the youngest son, Frederick, served between the Korean and Vietnam Wars. Both of his Daughters married WWII Veterans (Francis to Ralph E. Piano, US Army and Jenny to Tony Marcantonio, US Navy).

Family, Faith, and Country were fundamental values for his children as they started their own families after WWII. The majority of children lived is such proximity of their parental home they could also be recognized as next door neighbors. They flew Old Glory at their homes, they attended the same church, their children spent time playing in the same house their parents had been born in, and they shared the garden grown vegetables, fruit, and the homemade bread and wine that were always available at my Grandparent’s home.
Angelo Iossa’s example of Service to Country continued to manifest itself in subsequent generations as if it were part of their DNA. Four of his Grandsons served during the contentious Vietnam War Era; three of his Grandsons served during the Cold War Era; one of his Grandsons served during the Gulf War Era; and more recently, two of his Great Grandsons, one a pre-9/11 Veteran, and the other a post- 9/11 Ensign, who graduated from the United States Naval Academy in the Class of 2016, continue the family tradition of Service.

I could not be prouder of what my Grandfather started nearly 100 years ago when he entered the United States Army to fight in WWI. I also feel blessed to be able to trace my Italian heritage back to Italy, but I know deep in my heart, like my Grandfather before me, I would never trade anything for my American Citizenship and the opportunity to serve this Great Nation.

In retrospect, my Grandfather was the most patriotic American I have ever met. As I was leaving for a tour of duty at Camp Darby, Italy in March of 1984, he spoke to me about his WWI service on the Marne River for the first time. Just Grandfather and I sitting on the front pouch of his house with the American Flag slowly moving in the spring breeze. The same house that my Father was born in, that I played in as a child, and that my son played in as a child. He explained to me how the German soldiers attempted to cross the Marne River continuously for several days and how his unit continued to engage them with machine gun fire. He also explained to me that the logistics system of the day to replenish ammunition to the machine gunners included donkey drawn wooden carts. They must have been crude and barbaric battles, which I’m sure is why he never spoke about them to me before I was going overseas again. He also probably knew his time was limited as he suffered with bone cancer, which he would eventually succumb to.

It would be the last conversation I had with him, but one that will resonate in my mind whenever I think of him. I still love and miss my Grandfather every day and if I could speak with him now I would thank him for everything he did and the patriotic example he set while he was alive.