When I was about 10 years old, living in the house in Fair Lawn that my parents bought from my grandfather when he retired to Cape Cod, my brother and I one day unearthed in the attic my grandfather’s Army jacket (with the insignia still attached), his hat, and the medal issued to everyone who served in the war. Not yet realizing the historical importance of these items, we enjoyed putting on these relics and marching around the house – and out in the yard – pretending we were soldiers. Unfortunately, although these garments survived World War I, they didn’t survive the Bostock boys. But they piqued my interest.

Years later, on a visit to my grandfather, I asked him about his service in France during the “war to end all wars.” Like most veterans who have seen the horrors of war, he was reluctant to share much of his experience, except to remark on how friendly the French people were. But he did tell me one typically self-deprecating story.

One day he was asked to step in and serve as a substitute aerial photographer for a reconnaissance flight over German lines. He had never been aloft in an aeroplane, and hadn’t been 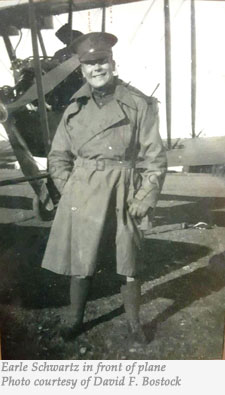 trained in aerial photography, but with the bravado of youth he willingly accepted the challenge.

Sitting in the rear of a dual-cockpit, open-air biplane, he was soon airborne, and after a while they were over the enemy lines. The pilot signaled it was time to start taking pictures, so my grandfather leaned out the side of the cockpit, lifted the camera over the side, and promptly had it ripped out of his grasp, where the slipstream carried it down to the ground. He had forgotten to put the camera’s strap around his neck.

The pilot, seeing what happened, was spitting mad. All they could do was turn around and make their way back to friendly territory. When they landed, the pilot made very clear, in language that turned the air blue, just
how angry he was that the perilous flight was a waste and how thoroughly incompetent he thought this idiot Schwartz must be. My grandfather took his dressing down manfully, until tired of the lecture, he said, “Well, maybe the camera killed one of the enemy when it hit the ground.”

After he finished relating the story, I asked him how he could have dropped the camera. He replied, “I’d never been on anything moving faster than a street car, so I had no idea how strong the wind would be.” I didn’t press him any further, but still I wondered why he couldn’t hold onto a simple camera. 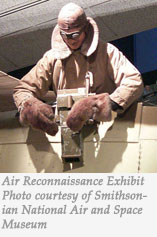 It wasn’t until years later, when I was visiting the National Air and Space Museum in Washington, DC, that the story finally made sense. The museum had an exhibit on the history of aerial reconnaissance. Included in the exhibit was an aeroplane of the type my grandfather flew in, with a mannequin of the pilot and another of the photographer, leaning over the side pointing the camera toward the ground.

Much to my surprise, the camera was huge, bulky, and heavy (depending on the model, these cameras weighed anywhere from 20 to 35 pounds), as the picture below of the exhibit makes clear. And as you can see, the dummy has the strap around his neck. I finally understood why my grandfather couldn’t hold onto that camera – that big, cumbersome camera. 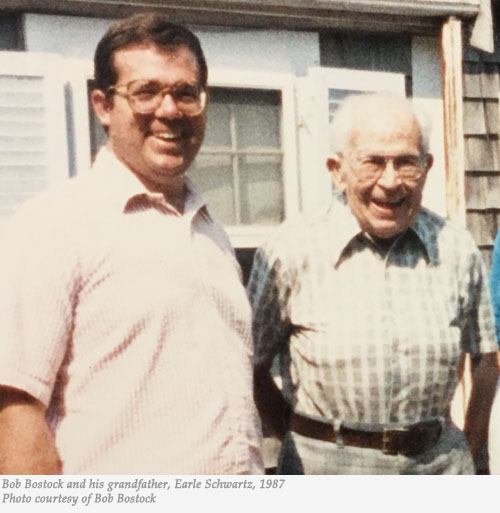 Bob Bostock is the proud descendant of Revolutionary War and World War I soldiers and the even prouder father of LTJG Robert M. Bostock Jr., USN, who is currently on active duty.

For more information about aerial photography in World War I visit: http://www.westpoint.edu/cegs/siteassets/sitepages/research%20ipad/origins%20of%20aerial%20photographic%20interpretation_2008_jan_77-93.pdf