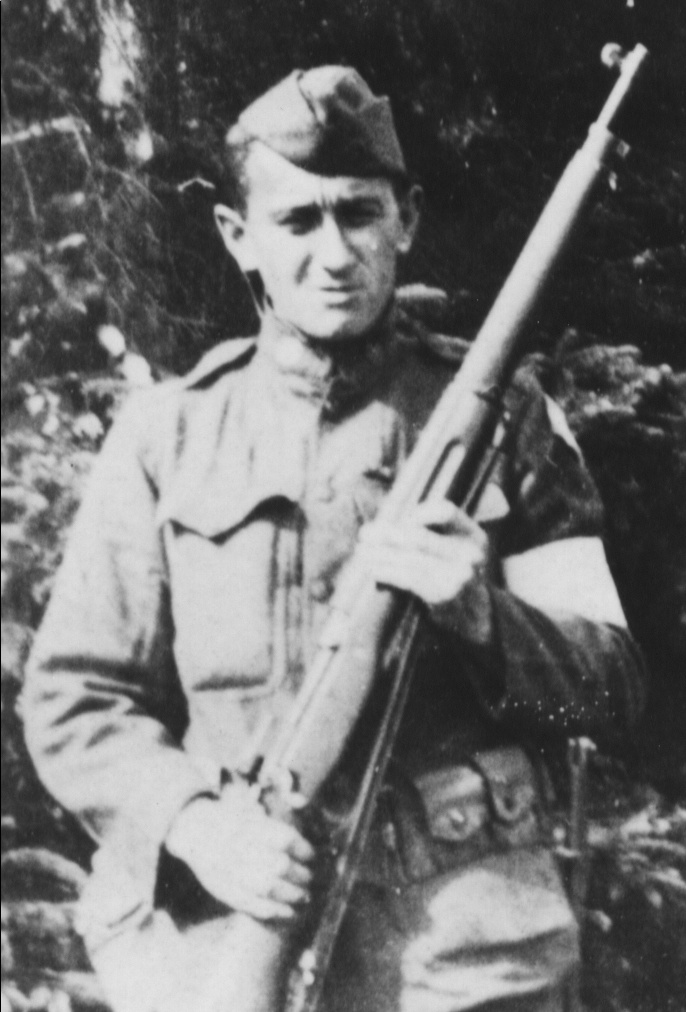 In England, the 4,284 officers and enlisted men of the 339th Infantry, plus the 1,200 men of the 1st Battalion of the 310th Engineers, the 337th Ambulance Co. and the 337th Field Hospital of the U.S. Army's 85th Division were organized as the American North Russia Expeditionary Force (ANREF). After a month of training with British weapons, the ANREF boarded transport ships and on 22 AUG 1918, they sailed for Archangel, Russia, which they reached on 4 SEP 1918.

President Wilson had authorized sending US troops to Russia for the express purpose of preventing war material from falling into Bolshevik or German hands. However, immediately upon their arrival, the ANREF was placed under British command and spread out along five different fronts surrounding Archangel. Their orders were to replace the existing French and British troops of the Allied Expeditionary Forces who were engaging the Bolsheviks (Communists), Companies I, K, L and M of the 339th Infantry were assigned to the Vologda Railroad Front, including the HQ at Verst 455 and the front line at Verst 445. The Vologda Railroad Front was about 100 miles to the south of Archangel, near the village of Obozerskaya.

The conditions were miserable for the troops, the marshy terrain was flooded with standing water, and the first heavy snows came on 15 OCT 1918. On the afternoon of 4 NOV 1918, Company I found themselves under attack and outnumbered 6 to 1 by Bolshevik forces. Company I, along with an attached unit of French Artillery, successfully repulsed the attack. During the heavy fighting, one member of Co. I was killed and two others were wounded, one severely. Fourteen Bolsheviks were taken prisoner and the known enemy dead numbered thirty-four, with an estimated 100 to 150 wounded.

Clement Anthony Grobbel after receiving the Croix de Guerre in Siberia on Feb. 17, 1919.During the attack, Cpl. Grobbel moved his Lewis machine gun from its emplacement up onto the exposed railway embankment so he could more effectively direct his fire. In recognition of the role he played in repulsing the attack, Clem was awarded the Distinguished Service Cross and the French Croix de Guerre. I've attached a US Army Signal Corps photo taken immediately after the ceremony during which my grandfather and six other 339th Inf. Reg. soldiers received the Croix de Guerre on Feb. 17, 1919.  The ceremony was held at the Railroad Front HQ at Verst 455, which was 10 Versts (about 6 miles) north of the front lines.

On 11 NOV 1918, the World War in Europe ended with the Armistice, while in Russia, the fighting continued. By Nov. 18th, when the last of the 339th finally received their British-issued winter uniforms, temperatures were consistently below zero degrees Fahrenheit.

That winter was very difficult for the poorly equipped members of the ANREF. Their British commanders seldom ventured out into the field, thus they did not understand how inadequate their rations, weapons and winter gear were. There were regular engagements with the Bolshevik Army, but what resulted was basically a stalemate. Despite being ill-equipped and outnumbered, the 339th was able to inflict more casualties than they received in battle. However the bitter cold and sickness were also formidable enemies and 76 of their members succumbed to illness or accidents, in addition to the 134 who were either killed or missing as a result of hostilities.

By April of 1919, US Army General W.P. Richardson had arrived in Archangel and immediately began to visit the ANREF units out in the field, where he observed first-hand their deplorable situation. His report set in motion the removal of the ANREF, which began in June when they were replaced by British volunteers who continued the holding action until the British leadership gave up and totally withdrew from Russia in October of 1919. The main elements of the 339th arrived back in Detroit late in the evening of July 3, 1919 and were treated to a warm homecoming on the following day, complete with a parade and picnic on Belle Isle. The photo of Clem in uniform was taken on July 4, 1919 after the parade on Belle Isle.

At the same time that President Wilson sent the American North Russia Expeditionary Force (ANREF) to Archangel, Russia (a port on the White Sea), he also sent the American Expeditionary Force Siberia (AEFS) to Vladivostok, Siberia (a port 3,600 miles away on the Sea of Japan). While their missions were similar, there were no communications or coordination between these two Expeditionary Forces. The AEFS consisted of the 27th and 31st Infantry Regiments of the Regular Army. Upon their withdrawal from Vladivostok in 1920, the 31st Infantry became known as the "Polar Bear Regiment", not to be confused with the soldiers of the 339th Infantry who also adopted the "Polar Bear" name.

Soon after their return to the US, the ANREF veterans formed the Polar Bear Association and held reunions every other year beginning in 1922. While the majority of their dead had been returned to the US in 1919, more than one hundred bodies still remained because they had been buried in places that were behind enemy lines at the time of their withdrawal. It took a while, but the Polar Bear Association successfully lobbied government officials to allow a search team to travel to North Russia and recover many of the remains that had been left behind. They were able to recover 84 sets of remains, which were returned to the USA in Nov. 1929. 44 of them were re-buried at White Chapel Cemetery in Troy, MI on Memorial Day 1930. At the same time they dedicated the Polar Bear Monument, which is surrounded by their graves. Every Memorial Day for the next half-century, the Polar Bear Association members held a service at the Monument to honor their fallen.

Today, that Memorial Day tradition is carried on by the Polar Bear Memorial Association, of which I'm president. Our Association is an affiliate of the Michigan's Military and Space Heroes Museum in Frankenmuth, MI, which has an extensive collection of "Polar Bear" stories, uniforms, medals, diaries and related artifacts. My grandfather's uniform, medals and war letters are on permanent display at the Museum. I am also a member of the Museum's board of directors.

The Polar Bear Monument is shown on the map that is at the Michigan in World War I Places and our Museum will eventually be having our WW I related exhibits and events listed on the Michigan in WW I Events web page. 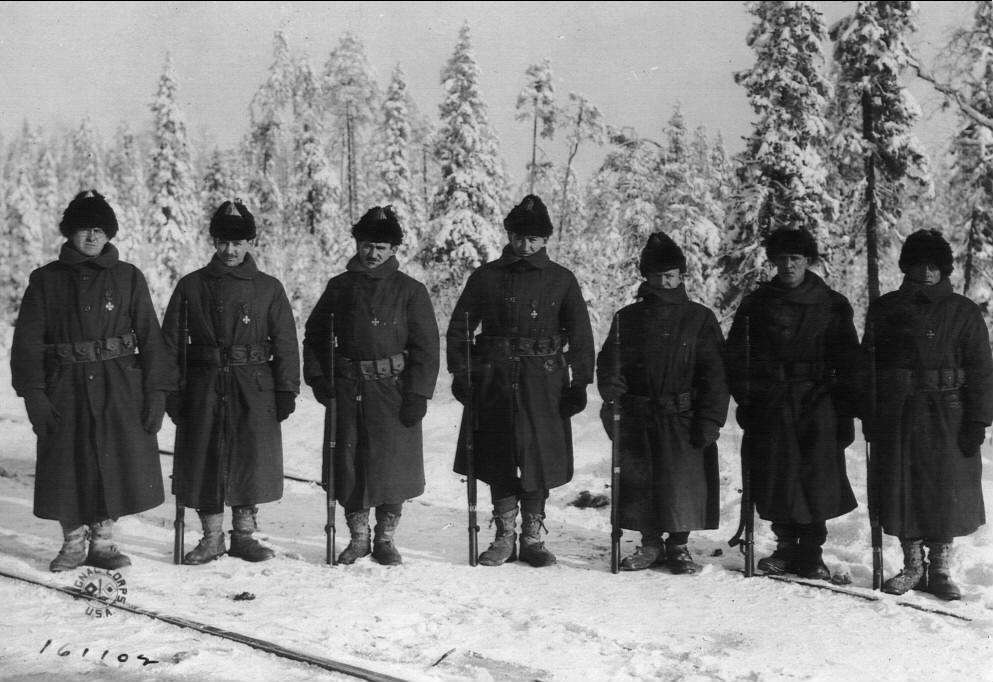 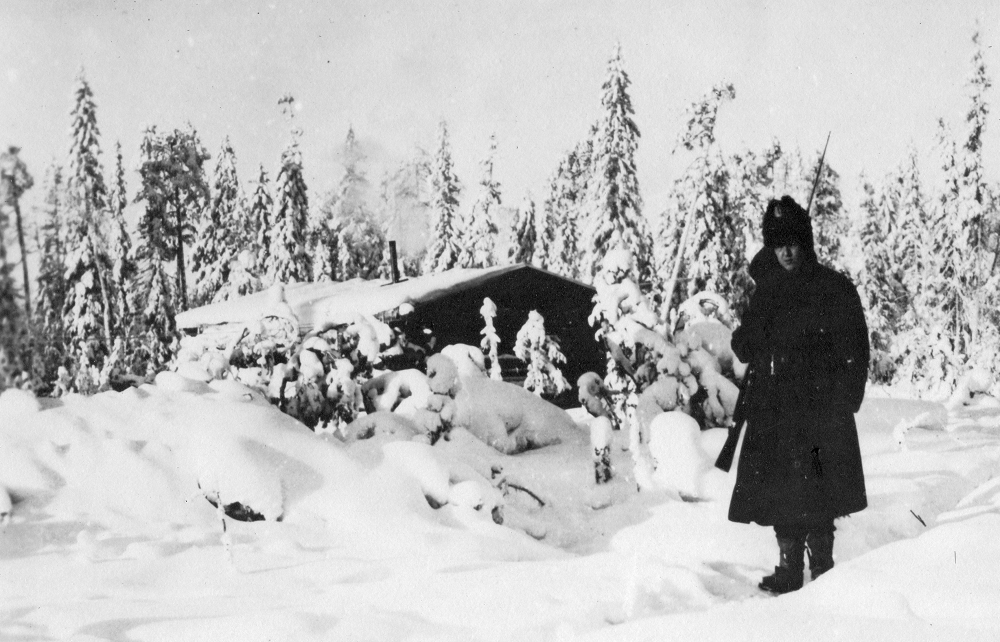 Blockhouse at Verst 455 surrounded by the forest, white with a new covering of snow. The picture was taken on one of the coldest days of the year when the temperature reached a point of fifty degrees below zero. The American soldier in the foreground is Cpl. Hearn of Company I, 339th Infantry Regiment, 85th Division. Location: Verst 455, Vologda Railway Front, Russia. Date: Feb. 17, 1919. 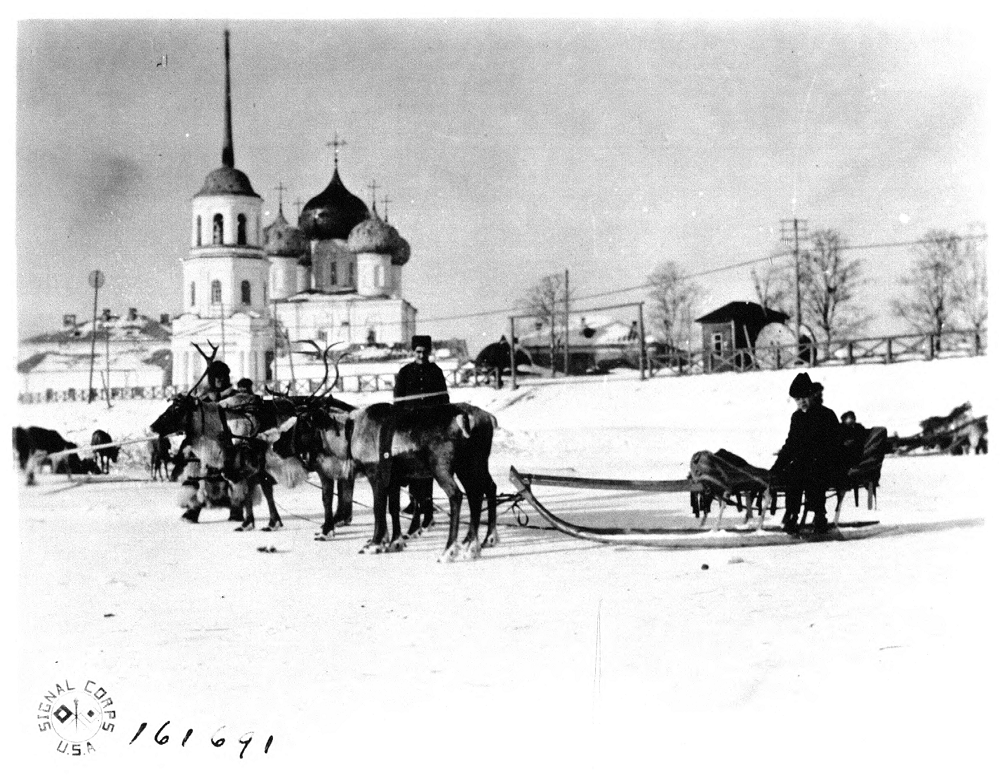 Reindeer teams. In the background is one of the churches of Archangel. March 7, 1919