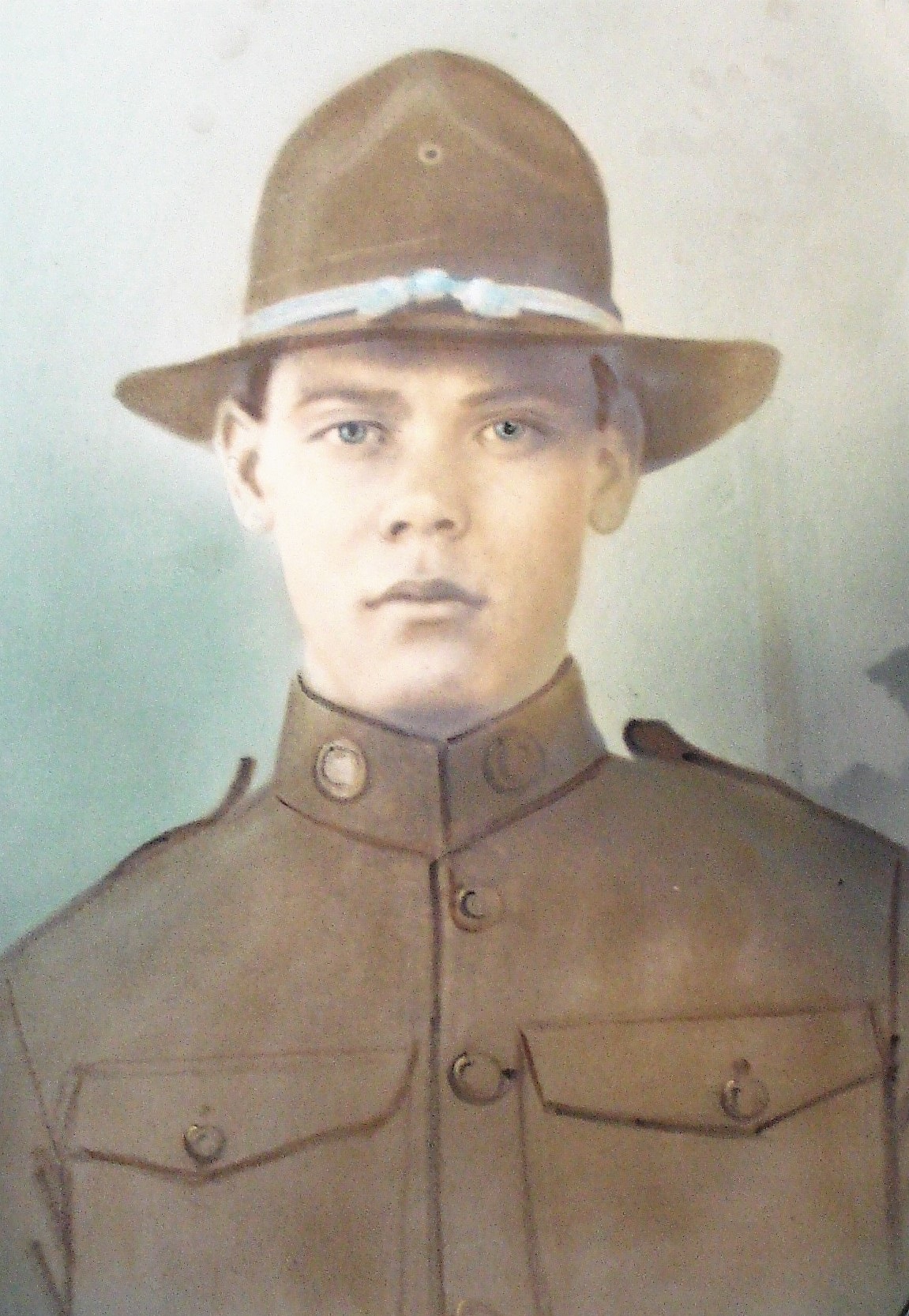 The 318th Regiment trained with the British Third Army and joined other forces on the front lines near the Artois sector in the Somme Offensive of 1918. Pvt. Schaffranek served in the Artois Sector near Arras from July 23 to August 18, 1918; the St Mihiel Offensive (318th Regiment was held in 5th Corps Reserve) September 12-16, 1918; and the Meuse-Argonne Offensives of September 26 to October 12 and November 1-7, 1918. On October 4-5, 1918, he was engaged in action against German units entrenched in the Bois des Ogons, north of the village of Nantillois, France. This frontal assault was particularly difficult and dangerous for the “Doughboys” due to heavy enemy fire from artillery units on their flanks, fire from machine gun units nested in the woods countering their forward advance, and the explosion of gas canisters over their heads as they maneuvered through rolling open fields toward the fortified German position. In a letter that appeared in the 80th Division Bulletin, the Commanding Officer of the Third Corps, to which the 80th Division was attached during the Meuse-Argonne Offensive, praised “…the gallant conduct of the Division in making three successive assaults with great bravery and finally taking and driving the enemy from the Bois-des-Ogons in the great battle of the Meuse-Argonne.”

During the Meuse-Argonne Offensive of November 1-7, 1918, Pvt. Schaffranek’s Company Commander 1st Lieutenant James A. Turner and 1st Sergeant George C. Schutte were killed near Buzancy, France. Lt. Turner was awarded the Distinguished Service Cross for extraordinary heroism for continuing, after being wounded on November 2nd, to command his company until he was killed by an enemy shell the following day. My father would also learn that Pvt. Matthias Popish (brother-in-law of his sister Bertha), who was serving in the 325th Infantry Regiment of the 82nd Division, was wounded in action near the St. Juvin-St. Georges Road, in France, and died on October 15, 1918. Once during his Army service in France, my father was called to Company Headquarters and asked how he felt about fighting against his former countrymen to which he replied that he was an American now and proud to serve his country. Pvt. Schaffranek was awarded the rank of Private 1st Class on December 6, 1918. He departed from Brest, France, on May 17, 1919, on board the USS Maui and arrived in the port of Newport News, Virginia, on May 27. He survived the war without suffering any wounds or incurring any potentially debilitating effects of noxious gases used during the war. He was honorably discharged on June 4, 1919, and recognized as being of excellent character in his military discharge record. Pfc. John Schaffranek was awarded a WWI Victory Medal and service ribbon with two bronze stars.

In 1926, my father married Mary Margaret Gresh, the daughter of an immigrant family from Slovakia. John and Mary lived for a short time in a house owned by the coal company (known as a “company house”) for which he was again working. In 1930, he was able to purchase a small farm house and three acres of land at a Sheriff’s sale for $25 in a rural community of Portage Township known as Dutch Settlement because of the predominant German heritage of the people who settled there (the designation “Dutch” being a misnomer for “Deutsch”). He built a barn so he could raise farm animals and begin farming part of the land. He had a “green thumb”; he could make anything grow. He owned a pony that he used to cultivate and meticulously maintain fields of vegetables he planted. He was especially fond of pansy flowers, particularly yellow ones, and would diligently work on a flower bed he kept along a concrete walk in front of his house. He chewed Mail Pouch tobacco which helped mitigate the effects of coal dust he inhaled when working in the mine, drank his coffee cold and black from a large cup he stored, usually full, in a cupboard, made homemade wine from grapes he grew, and preferred Old German beer. He enjoyed trips to town on Saturdays to go to the Loyal Order of Moose, American Legion, or Veterans of Foreign War halls to visit the guys and “have a few beers.” He was a quiet, unassuming man who worked very hard on his farm and for more than 40 years in the coal mines to provide for his family. John and Mary raised a family of six children, four sons and two daughters.

Perhaps partly inspired by their father’s respect for duty to country through military service, all four sons and the husbands of his two daughters served in the military, one son-in-law in the Navy during WWII, one son with the Army on the front line in Korea, a son in Japan during the Korean War, a son-in-law in Germany, another son in Germany during the cold war, and a son Stateside during the Vietnam War. John Schaffranek died on February 25, 1979, six days after his 83rd birthday, in Lee Hospital in Johnstown, Pennsylvania. He is buried next to his wife Mary in Assumption of Blessed Virgin Mary Cemetery in Portage, Pennsylvania. The inscription on his cemetery marker proudly reads “CO. I 318 INF. 80TH DIV. U.S. ARMY.” The name of John Schaffranek is inscribed on Panel number 559 of the American Immigrant Wall of Honor on Ellis Island within the shadow of the Statue of Liberty in New York Harbor, by which he passed on two momentous occasions within his lifetime.

In April 2015, my nephew, his wife, and I visited the tiny village of Nantillois in northern France while retracing the path of my father’s 318th Regiment during the war. In the village, we saw the 80th Division monument on which is inscribed “This monument has been erected by the State of Pennsylvania as a tribute to the heroic service and notable achievement of the Eightieth Division American Expeditionary Forces.” The 80th Division engaged enemy units north of Nantillois in the Bois des Ogons following liberation of the village by the 79th Division. In recognition of this effort, the residents of Nantillois erected a display panel near the 80th Division Monument on which they attached a picture of our father and grandfather, Pfc. John Schaffranek, as a representative of the 80th Division. Our humble thanks go out to the residents of the village of Nantillois for this recognition and especially to local resident Marteen Otte for his efforts in honoring our father and grandfather in this way and for a picture of the panel.

God bless our freedom and those who fought and continue to fight to preserve it for us and future generations. God bless our father and grandfather John Schaffranek. Rest in peace Dad.