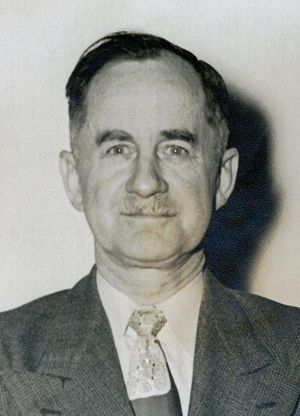 Salesmanship was not just a trait from the Maune side of the family. Gustave’s father-in-law, Ferdinand Marten (which later evolved to Martin), operated a hardware store in Ackley, Iowa and Ferdinand’s brother-in-law, William H. Goettel, operated the Goettel & Son General Store in the same town. The families of both gentlemen emigrated from Soldin, Brandenburg, Prussia in 1858, and settled in Thompson’s Corners (near Lansing), Iowa where they operated several farms. In 1899, Gustave purchased Ferdinand’s hardware store and coal business. After some success, Gustave sold the businesses in 1904 and moved his family back to St. Louis to join his father’s real estate company. Grandpa really enjoyed his 5 years in Iowa and kept in close contact with his cousins in Ackley, especially Karl Goettel, one of William’s sons. 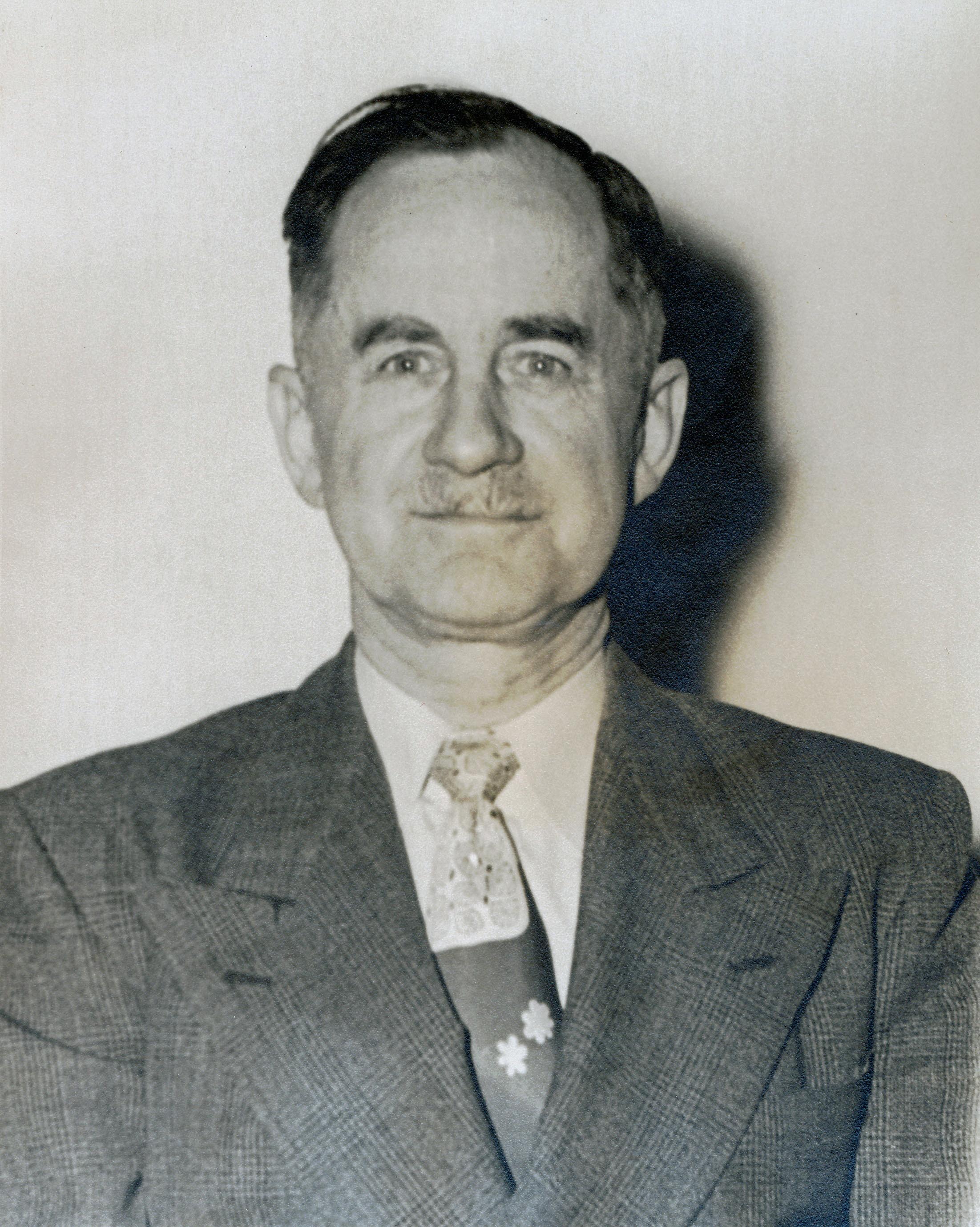 Martin Ferdinand Maune, a 3rd generation St. Louisan born in 1896, first served his country during the Mexican Border conflict from June through September 1916. While under the command of General Pershing in Company E of the 1st Infantry, Missouri National Guard, Martin attained the rank of corporal. After mustering out in Nevada after his 3 months of service, Martin returned to his job as a salesman for the Kieselhorst Piano Co. in St. Louis. But duty quickly called again and Grandpa enlisted on April 4, 1917, to serve in the Great War until April 27, 1919, when he again returned to selling pianos for Kieselhorst.

Like his grandfather, August, Martin initially performed guard duty around St. Louis in 1917. Eventually he was sent to Camp Doniphan, Oklahoma, for training. Known to sass authority if deemed incompetent by his standards, Grandpa remained a private for the duration of the war.

On May 11, 1918, Private Maune disembarked at Le Havre, France with the Headquarters Company of the 138th Infantry Regiment. During its first few months in France, the 138th set up headquarters near Dounoux, a farming community by the Moselle River. The men noticed the Frenchwomen working the fields. Being from the Midwest, the Missourians were aghast that women were doing such work. Eight hundred men volunteered to do fieldwork for these women (I like to think that Grandpa was one of them), receiving hearty homecooked meals in return before being called to the front.

The 138th and 5th Infantry Regiments were consolidated into the 138th Infantry Regiment of the Missouri National Guard which was federalized and served in Alsace, Saint Mihiel, and the Meuse-Argonne campaigns under General Pershing’s command. Since Grandpa never said much about his service I pieced together his movements through the trenches via the accounts of others, primarily those contained in Charles B. Hoyte’s “Heroes of the Argonne. An authentic history of the Thirty-fifth division”.
The most compelling account for me is about the heroic fight on the morning of September 26, 1918. That morning a thick gray fog filled a shallow valley through which the road to Cheppy lay not far from the river Aire. When the fog cleared, Grandpa’s HQ company of 12 officers and 200 men of mostly noncombatants, ended up being surrounded by the elite Prussian Guard. Many men fell there as machine gun fire swept the spot and shells pounded the road ruthlessly. Those that could took cover in a ditch beside the road.

Early in this barrage of fire, “two small French tanks came bowling over the hill. It was feared that an American might not be able to make the French tank crews understand the situation. Sargent Morel, the interpreter assigned to the regiment by the French army, took the job upon himself. Morel lifted himself out of the ditch and ran across the field, swept as it was by machine-gun fire from the whole woods across the creek. He sprinted in front of a tank and waved his arms and yelled. One tank stopped and the little trap door opened. Instead of the expected parlez-vous, an American soldier stuck his head out and asked calmly: “Well, what the hell do you want?” Morel showed where the enemy machine guns were hidden as they had ceased firing to avoid revealing their position. He then went back to headquarters in the ditch.” The effort earned Morel the Croix de Guerre.

Ultimately, the HQ company disintegrated down to two officers and 4 enlisted men over three hours without any ability to communicate with ot

her units. The wireless telegraph and radio systems had failed. Runners were tried, but their success was not known. Finally, 8 allied tanks maneuvered expertly into position on the road based on the good recognizance from the 2 earlier tanks. Squads formed behind these 8 tanks and they began to take out enemy positions. Grandpa and the 5 other remaining men from his company joined this operation that cleared the road to Cheppy.

Grandpa survived. In later years, he claimed to still have shrapnel in his body and to have permanent side effects from being gassed. He also told of the hunger and thirst he and his comrades endured in those last few months of the war. A memorial to the Missourians was erected in 1922 at the spot on the road to Cheppy known as “the three trees”. The image of these three shattered trees peering through the fog and damp mist was a poignant one for the men’s remembrance of their fallen comrades. September 26th was the opening day of the Allies’ decisive Meuse-Argonne Offensive, a 47-day all-out struggle that concluded with the armistice that brought WWI to an end.

Back in St. Louis, Grandpa returned to work as a piano salesman on “Piano Row” near the intersection of Olive and 10th, the heart of the city for any St. Louisan. The information about Grandpa’s work in the music industry was gleaned from the magazine, “The Music Trades”. One could say that music was an integral part of his life from an early age with his mother, Louise Caroline (Martin) Maune, being a piano teacher. Another musician in the family was first cousin, Arthur J. Wissmath, who attended Strassberger’s Conservatory of Music in St. Louis to train his vocal talent. In 1922, while working for Baldwin & Company, Grandpa organized a charity event for veterans that showcased performances on several Baldwin pianos. The money raised that evening probably helped fund the memorial to the Missourians near “the three trees”. Earlier in 1922, Grandpa was driving a Kieselhorst company car when he swerved to avoid a head-on collision and ended up in a shop window. That accident may have been the reason that he was with the competing piano company for the charity event.

With the decline in the piano business and the Great Depression, Grandpa moved west to Kansas City, married Marjorie Amelia Hansen, and started a family - a daughter and son they named Mallerd and Drake (aka., Martin Jr.). The 1930’s were difficult years with sporadic work. Martin raised vegetables in the vacant lot next to his house to help feed his family. Even in 1940, Grandpa was still a laborer for WPA projects. Eventually he had a career as a salesman with Sears, Roebuck & Company. The 1940’s were difficult too as his family had to split up due to his wife’s illness. Fortunately, his in-laws, Walter and Caroline Hansen, provided support in raising Mallerd and Drake for most of that decade in St. Joseph, Missouri.

Dr. Walter Joseph Hansen was also a WWI veteran having been a surgeon assigned to the 53rd Balloon Company at Ft. Omaha, Nebraska and then Camp Morrison, Virginia. Other WWI veterans in Grandpa’s family included his brother, Sgt. August Roy Maune, 161st Infantry Regiment, 41st Division, France; an uncle, 1st Lt., Dr. Ruben Ferdinand Martin, Medical Corp., Ft. Riley, Kansas; and a first cousin, 2nd Lt. Leonard August Maune, 16th Aero Squadron, Texas. Another first cousin, Arthur J. Wissmath, born in 1891, is pictured below in an army uniform. I like to think the others in the picture are Roy (b. 1891), Martin, and Leonard (b. 1894). However, I have not found Arthur’s enlistment record (he was living in Sioux City, Iowa in 1917). Arthur was a 1912 graduate of Washington University School of Law in St. Louis and Reuben was a 1912 graduate of St. Louis University School of Medicine. During WWII, Ruben was the camp physician at the U.S. Family Internment Camp, Crystal City, Texas (at the time, he went by the first name of “Robert” due to German sensitivities). Both Maune brothers (Martin & Roy) enlisted in WWII during the “old man’s registration” in April 1942. 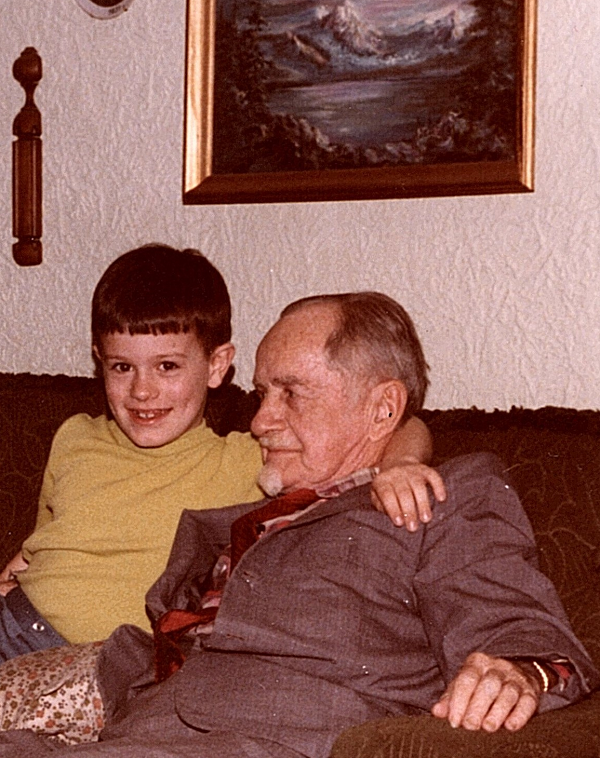 Grandpa and Douglas M. Frye 1972I would visit him during spring break every year before going to college. His mustache and goatee framed his persona as he smoked a cigar and exhaled perfect white rings while playing solitaire. After attending Sunday service at the Swope Park Baptist Church with a flower in his lapel and a fedora askew, Grandpa would take Mallerd’s and Drake’s families to dinner for some lively discussions. His eyes would alternatively glare and sparkle with some knowing insight of your foolishness. His nurturing side was most evident by his well-kept gardens. I remember the ripeness and delicious taste of the strawberries he grew in large quantities at 4407 Bales Avenue as well as the roses that bloomed at 8221 Mercier Street.

One time he pulled out his war medals (I don’t think they had ever been worn). I made pencil rubbings of all four (2 for the Mexican Border and 2 for WWI). His medal depicting winged Victory has three clasps across the rainbow-colored ribbon. Two of the clasps are labeled for the battles of St. Mihiel and Meuse-Argonne. The third clasp is labeled “Defensive Sector”. It is amazing to think what these medals represent. The image of the three shattered trees comes into my mind. At Grandpa’s funeral in 1986, the honor guard presented his son, Martin Ferdinand Maune, Jr., with the Stars and Stripes that had covered his casket. My Uncle Martin also had duty to country in his DNA having served in Korea.

Grandpa – your seven living descendants in this centennial year of 2017, are your grandchildren and great grandchildren, Douglas, Diana, Drake, Michael, Morgan, Abby, and Emma, and we thank you and your comrades for your service and sacrifice. Some of us plan to be in St. Louis this April to commemorate your enlistment in April 1917.