In 1898, as an Ordinary Seaman, Seach was in to China during the Boxer Rebellion. As part of the relief expedition of the Allied forces, Seach distinguished himself by meritorious conduct in a number of incidents, and was awarded the Medal of Honor.

William Seach as a sailor after the Boxer Rebellion.

After the torpedoing in 1918, Seach was held on the submarine with another USS Florida shipmate, Lt Edouard Izac, who would himself be awarded the Medal of Honor for his actions in escaping his German wartime captors.

Seach was evidently released back to the ocean by the U-90 crew later.

Lt Seach was wounded in the experience, and was later rescued by the French. Lt Seach's injuries were such that, following his identification from French Hospital, he was shipped to the Walter Reed Hospital.

My grandmother had just given birth to my father, William Seach, in August 1918, possibly earlier believing herself to be a widow.

At Walter Reed, the doctors' final counsel was that Lt. Seach was in such bad condition that he should be sent home "to die peacefully".

His USS Florida shipmate, the other salty sea dog, Lt Edouard Izac, also lived to be some 100 years of age.

Lt Seach, MOH, and Lt. Izac, MOH, are interred scant yards from one another at Arlington National Cemetery.

The rarity of being a recipient of the Medal of Honor surviving a torpedoing by submarine and thereafter being rescued to live to the century mark is achievement of almost mythical import. 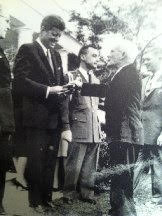 William Seach as an Honored Recipient at a White House Ceremony honoring the Centennial of the Creation of the Medal of Honor.Honors for Grandfather include the naming of The William Seach School in the Old Hometown of Weymouth, Massachusetts. Also, an additional honor was his attendance at the world premier of the classic war movie concerning the Boxer Rebellion, entitled "55 Days At Peking" and starring Charlton Heston, in Boston, Mass.

But, most significant honor of all was the selection of Lt Seach, MOH, to be on the Honor Guard in 1958 for the burial of the Unknown Soldiers from WWII and Korea.

Each Unknown was awarded The Medal Of Honor by President Eisenhower.

The funeral services held were duplicated for Lt Seach, MOH at his passing in 1978.

The William Seach military service continued with my father, William B Seach, a submariner and survivor along with my mother of the Pearl Harbor attack.

He served aboard the USS Tautog SS-199 which went on to sink more Japanese ships than any other during WWII, becoming nicknamed The Terrible 'T'.

The final William B. Seach military service was mine, serving an extended voluntary tour in Vietnam with my land legs, per the U.S. Army, beneath me, from 1970/71.