While the 20th Division did not deploy to Europe to face fighting in the Meuse-Argonne offensive, there were still deadly dangers even in the United States in 1918 and 1919. The most deadly risk for soldiers and civilians alike was the Influenza Pandemic of 1918-1919, which struck Camp Jackson with its first cases on 18 September 1918. Soldiers began dying of the disease within days. One thousand soldiers were hospitalized with flu in the first week. The situation is described by writer Carol Byerly:

“On September 19, 1918, 21-year-old Army private Roscoe Vaughan reported to sick call at Camp Jackson, South Carolina, feeling achy and feverish. He was promptly hospitalized along with eighty-two other soldiers that day. Influenza had reached the camp only the day before and would send 1,000 men to the hospital within a week. Medical officers at Camp Jackson implemented a special treatment program for respiratory diseases, holding sick call twice a day to examine the men for the flu and sending anyone with a temperature over 100 degrees to the hospital. Despite their efforts, influenza sickened more than 10,000 of the 38,000 men in the camp, killing 400, including five nurses who were caring for the soldiers. Private Vaughan was one of the unlucky ones who developed pneumonia; he died on September 26, just weeks after he had left home to join the Army. …

"Roscoe Vaughan was a victim of one of the deadliest disasters in human history. Coming on the heels of World War I (1914–1918), influenza followed wartime transportation routes across oceans and continents, sickening at least one-quarter of the world’s population and killing an estimated fifty million people in just eighteen months. This figure far exceeded the toll of twelve to sixteen million wartime casualties. The influenza outbreak devastated a world already struggling with the mass death and destruction wrought by more than four years of modern industrial warfare.

"The pandemic came in three waves, the first in the spring of 1918, the second and most deadly wave in the late summer and fall, and the third weakened but still lethal wave in early 1919. In the United States an estimated twenty-five million people became ill and 675,000 died. The disaster was so powerful in 1918 that it reduced American life expectancy statistics by almost twelve years.”

My grandfather continued to serve as a truck driver in the 20th Division until his discharge in February 1919, as the 20th Division was being deactivated. After discharge, he returned home to Minnesota and resumed work for the Greyhound Bus Company. After finding that driving required too much time away from home, his wife, and his growing family, he quit driving and returned to farming. He had farmed prior to becoming a bus driver.

The attached picture shows my grandfather and one of his matched pair of Percheron draft horses, Maud and Fanny, that he used for farming. 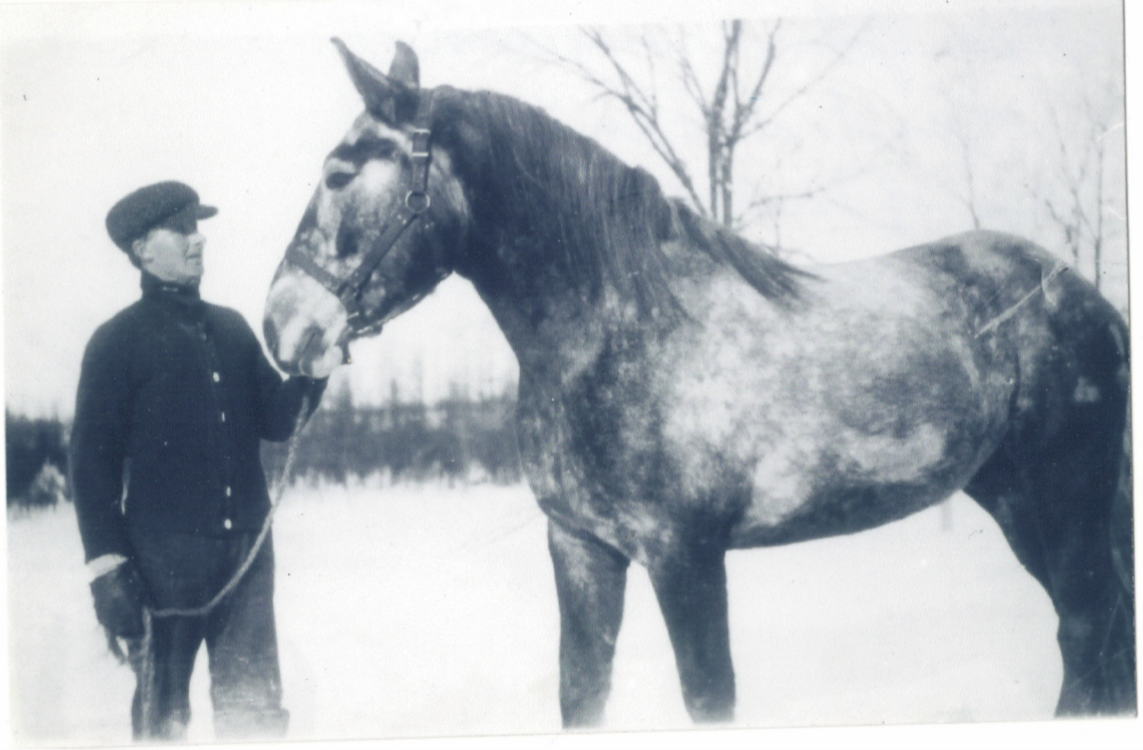