Melvin Grover Joyner born around 1887. Melvin Joyner served in World War 1 with the United States Army. The enlistment was in 1918 and the service was completed in 1919.

Melvin Grover Joyner was born in Nashville, North Carolina on February 10, 1887 to his parents Henry Lawrence and Nancy Vester Joyner. Henry Joyner died in 1894 and his mother Nancy remarried John Eason that same year. By 1900, the Eason and Joyner combined families lived in the Stony Creek township in Nash County, N.C. John Eason, who was a farmer and mechanic, had six children (Robert, Lotty, Willis, Johnnie, and Bennette) from a previous marriage, and Nancy’s children while married to Henry Joyner included Charles, Melvin, Patrick, and Lula. The large family worked either as farmer laborers or in cotton mills.

On February 14, 1906 Melvin G. Joyner married Maggie Batchelor (also from Nash County) and by 1910, Melvin lived and worked as a farmer with his brother Charles in the Mannings township of Nash County.

Melvin G. Joyner registered for military service in 1917, at which time he claimed exemption from the draft because of “bad health.” However, Joyner was inducted into military service at Nashville, N.C. on March 21, 1918. Joyner trained and served as a private with the 156th Depot Brigade upon enlistment until July 25, 1918, when he was moved to Company G, 53rd Infantry.

Melvin Joyner left to serve in the war on August 3, 1918. Joyner served in the trenches until July 5, 1919 and was discharged from active duty when he arrived back to America on July 19, 1919.

After that time, Melvin Joyner returned to live in Stony Creek with his mother and brother Jackson, and all three worked as farmers. On November 18, 1925 Melvin married for the second time, to Sadie Moss of Nash County. (It is unclear whether Joyner’s first married ended because of death or divorce).

By 1930, Melvin and Sadie Joyner lived in the Coopers township of Nash County where Melvin Joyner continued working as a farmer. Sadie predeceased Melvin Grover Joyner who died on March 17, 1973 from complications related to bronchopneumonia and influenza. Joyner was buried in the Oakdale Cemetery in Spring Hope, N.C 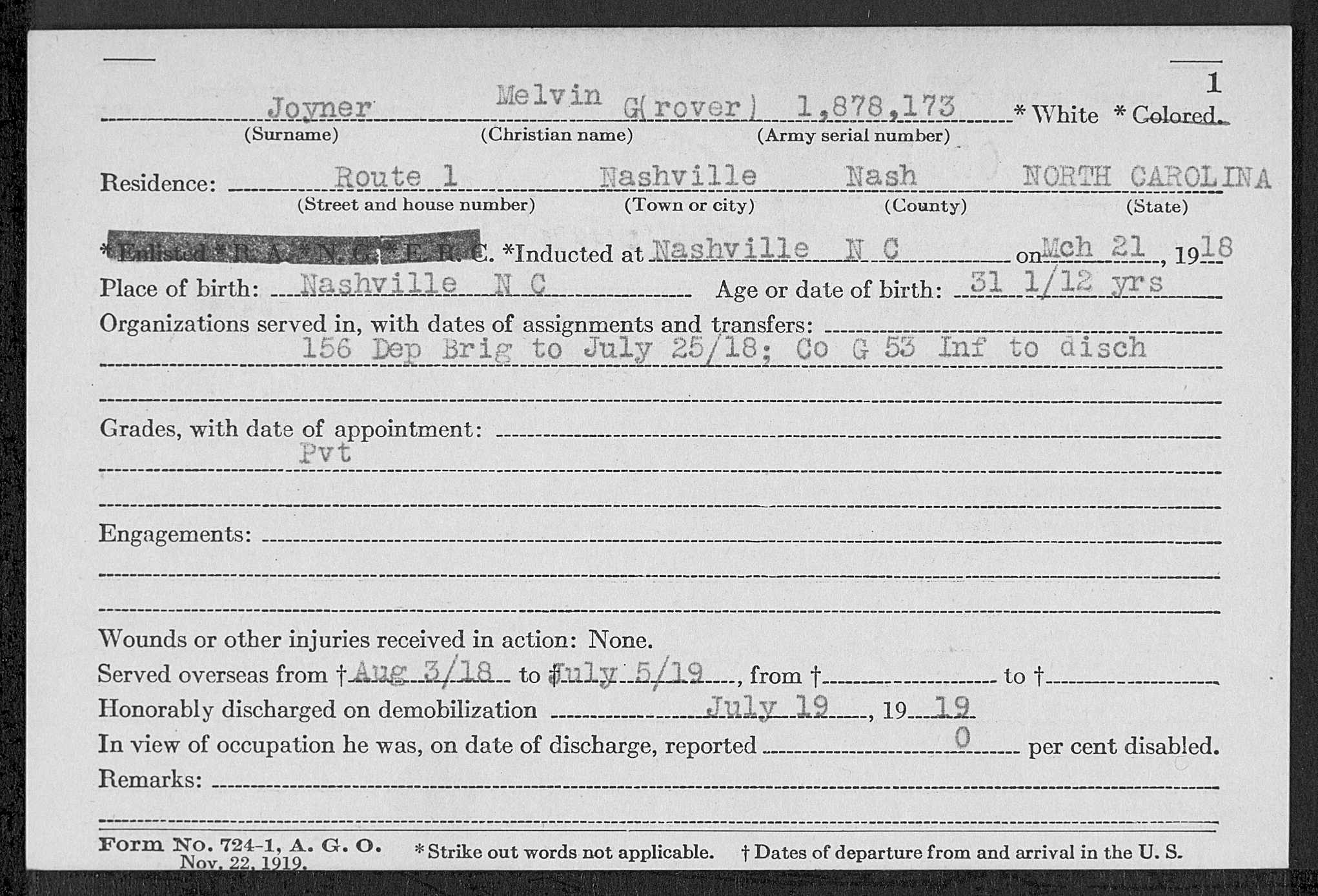