Malthus Reaumer Freeman born around 1888. Malthus Freeman served in World War 1 with the United States Army. The enlistment was in 1917 and the service was completed in 1919.

Malthus Reaumer Freeman was born on December 6, 1888 to his father Dr. Howard Franklin Freeman and mother Sally Williamson Freeman. Dr. Howard F. Freeman received his medical degree from the University of Maryland in 1857 and worked as a physician in Wilson County, North Carolina. Dr. Freeman’s former office was relocated to Bailey in the 1960s where it stands today as part of the collection of artifacts at The Country Doctor Museum.

By 1900, the Freeman family lived on a farm with two African-American servants in the small community of Old Fields, located in western Wilson County. Malthus Freeman worked as a farm laborer along with his elder brother who was named after their father. The Freeman’s had at that time six surviving children, from eldest to youngest: Addie, Fannie, Howard F. (“Frank”), Malthus, Sallie, and Fanny. One additional child apparently died in childhood.

Malthus R. Freeman attended the public schools of Wilson County and graduated from Warrenton High School in 1907. Malthus then attended the agricultural department of North Carolina State College (present-day North Carolina State University) from 1908 to 1911. While in school, Malthus continued to live with his family in the small community of Dry Wells in Nash County.

Freeman then entered the Medical College of Virginia, at Richmond, and graduated in 1913. For the following year, Malthus interned at the Virginia Hospital in Richmond, after which time he opened an office and started practicing medicine in Bailey, N.C.

Dr. M. R. Freeman registered for the military draft for the start of World War I on June 5, 1917. He was then called into active service as a 1st Lieutenant with the Medical Corps on September 7, 1917. Dr. Freeman received training at the Army Medical School in Washington, D.C. for two months and then transferred to Camp Custer in Battle Creek, Michigan. Freeman remained in Michigan until July 1918 when he shipped off with the 338th Infantry, 85th Division and landed at Liverpool, England later that month.

Dr. Freeman’s unit arrived on the French mainland to serve in the trenches around the first of August. Freeman fought in St. Mihiel, and then received wounds and was gassed in the Argonne Forest offensive. Dr. Freeman remained in Europe until April 28, 1919 and then received his official discharge at Camp Jackson in Columbia, South Carolina on July 21, 1919. At that time, Dr. Freeman was 20% disabled from his wartime injuries.

After the war, Dr. Freeman returned and lived as a boarder in Bailey. On January 24, 1920, Dr. M. R. Freeman married Pearl Miller in Richmond, Virginia. Miller was the daughter of John H. and Nora Bristol Miller, who attended the Davenport College of North Carolina. By 1930, Dr. Freeman and his wife continued living in Bailey with an African-American servant named Mildred Jackson.

Dr. Malthus R. Freeman lived in Bailey until he died on September 28, 1962, at which time Dr. William C. Hunter of Wilson, N.C. declared him deceased. Freeman was then buried in the Bailey Cemetery. 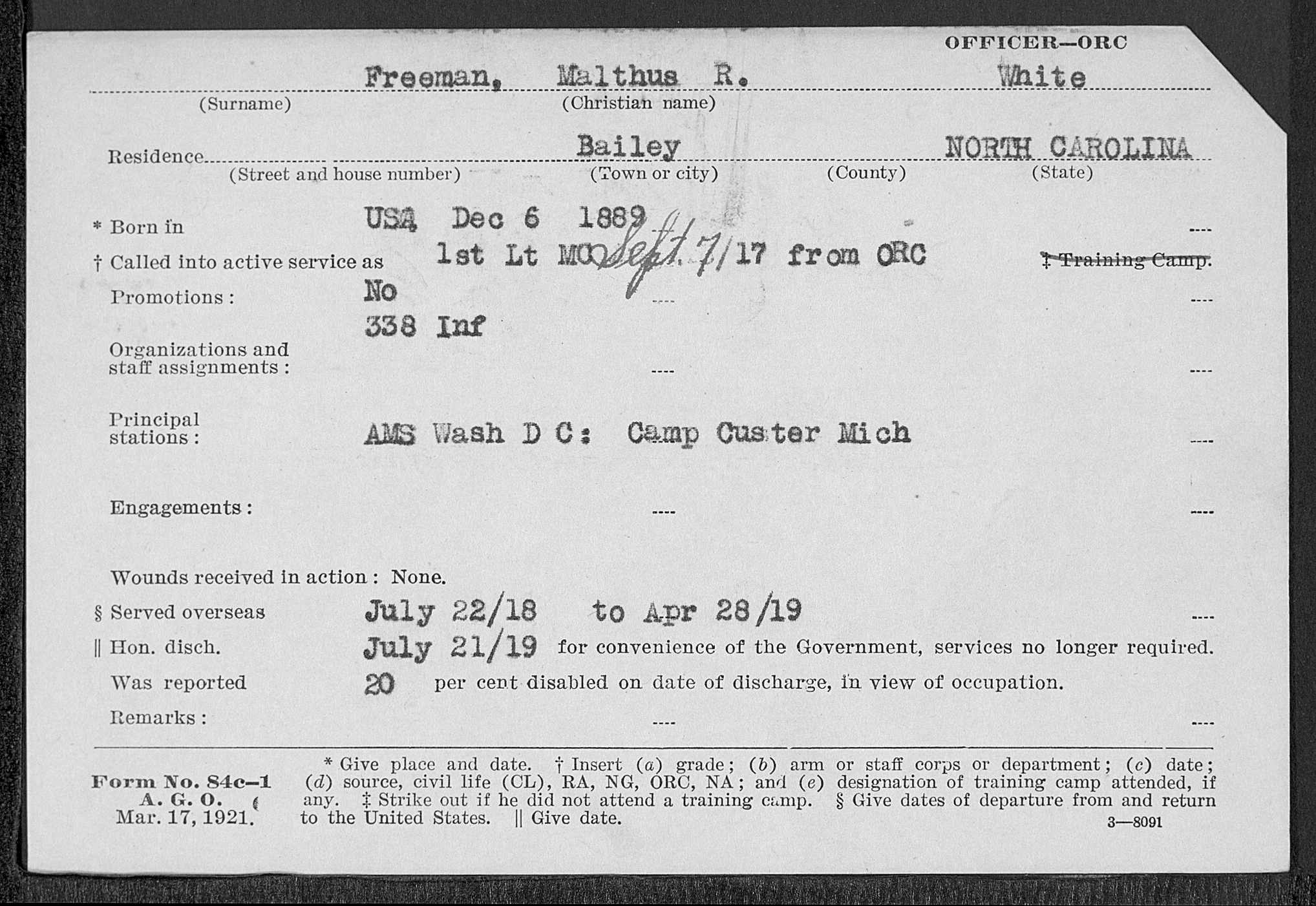