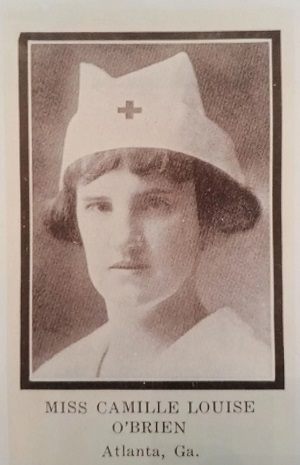 Unknown to the family, Camille's body was brought back to Georgia, in 1921 and placed in an unmarked grave, in Greenwood Cemetery, Atlanta. On April 18th, 2019, at 11am, I have put together a grave site memorial, for Camille. Thanks to Patterson & Son Funeral Home, Camille is going to finally have a beautiful gravestone. A WW1 Honor Guard will be present and a bugler, for Taps. Present at the site will be the grandson of Lt.Col. Edward Davis, the father of the Emory Unit, Ren Davis.

She joined the Army's Nurses Corps and in April of 1918, Camille was sent from St. Joseph's to the Emory Unit. She received training at Camp Gordon before being sent overseas. On the way to Europe, her ship witnessed three U Boat attacks. By August, Camille was at the Emory Unit, Base Hospital 43, in Blois, France. In her spare time she would visit battlefields. The Emory Unit chaplain stated she would come to work ill and after being told to rest, she would remark "I can not rest while we are taking in more wounded then we can bandage."

In January of 1919, the Emory Unit was relieved and brought back to the US. Camille and 40 other nurses volunteered to stay behind to continue to care for the soldiers. In April, of 1919, Camille was struck with Spinal Meningitis. She "scoffed at the idea of having doctors see her." On April 18, 1919, Camille passed away. She was buried in Blois, France with US soldiers and given a military funeral. According to Chief Nurse Caroline Dantzler, of the Emory Unit. "...the ravages of this war has brought a bond which is unexplainable and you can never realize what it meant to us to give her up."

When her body was returned to Atlanta, Georgia, Camille was in the local papers for three days. Many patriotic associations were at her funeral but she was left in an unmarked grave. On April 18, 2019, this Hero nurse will be remembered once again but this time with a beautiful gravestone. This memorial is open to the public.