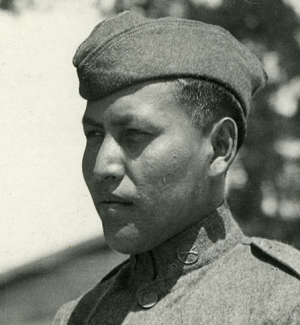 Juan P. Quintana, Jr. was born around 1899. Juan Quintana served in World War 1 with the United States Army. The enlistment was in 1917 and the service was completed in 1934.

The photograph by Joseph K Dixon is courtesy of the Mathers Museum Wannamaker Collection of photographs and letters documenting the service of Native Americans Indians. Juan was not a citizen but he became one June 2, 1924 when Congress authorized the Secretary of Interior to issue certificates of citizenship to Indians.

My father, Juan Phone Quintana was born on the Jicarilla Apache Reservation, August 24, 1899. He spent his first 16 years on the reservation helping his parents with the sheep. At the age of 9 he was finally caught by the Indian Agent and sent to school. He said his mother did not want the agent to find her children so she hid them.

At the age of 16 he decided he did not want to be a sheepherder, so he left the sheep and ran away. He caught the train to Durango, Colorado and joined the army. He lied about his age and no one asked for documents as world War I was in full swing. Although he was not recognized as an American citizen, he said it was his country to and he wanted to protect it and serve in the US Army.

Juan went to boot camp and served for 19 years. After boot camp he was shipped to Europe and France fighting under the command of General Pershing. He talked about fighting in or near the Argonne forest and other areas in Germany and France.

I recall one story he told of nearly being captured by a German soldier who asked him his nationality. Daddy Juan told him American Indian. The German soldier asked him why he was fighting a war that was not theirs. By some miracle the soldier let my father and another soldier go, I believe the other soldier was Franklin Torrez of Mescalero. There is a photograph of my father, Torrez and another soldier in the Mather Museum Wannamaker Collection. They remained friends after their return and visited each other.

Another story Daddy Juan told us is of a general who was totally shot. His troops were surrounding him he told my father, “Reach into my inside Pocket”, the general had lemon drops, which he asked my father to give those soldiers around him a lemon drop, then he died. To this day I still love to eat lemon drops and remember the story. He was gassed in the Argonne.

After the end of the WWI he remained in the army, one of the places he was stationed was West Point. as a guard when along comes General Douglas McArthur who was walking across the lawn which clearly had a sign, “Do not walk on the grass”, my father approached him and told him to get off the grass. The general was surprised but got off the grass and complimented my father for his fortitude to ask him to get off the grass. Into his late age he still kept the rule and admonished his children, grandchildren, and everyone else to keep off his grass.

My father in his later years of service was stationed in San Antonio, Texas. On furlough he traveled to Dulce, New Mexico to visit family. Upon getting off the train no one greeted him. He asked someone where was his mother he was told she had died while he as in Europe. No one contacted him as they didn’t know where he was. He turned around got back on the train and went to Espanola, New Mexico. He got a job at the Santa Clara Day School as a janitor. He had only a short while to complete 20 years in the US Army, but he chose to leave and marry my mother Manuelita Sisneros, she helped him with a discharge by purchase.

Soon after they moved to Dulce, located on his home, the Jicarilla Apache reservation. The first winter was very hard as they had to live in a tent. He begins working as a janitor for the Indian Health Service at the Indian Hospital. As his employment continued, he began performing other duties; grounds man, ambulance driver, interpreter and driver for the medical staff over and about the reservation.

One of his duties was to raise and take down the flag at the clinic and his children were all required to stand at attention until the flag was raised or taken down. We were taught how to fold the flag properly. He said a folded flag must never show red because it represented the blood shed from soldiers who passed away. He had a lot of respect for the country and his military service. He was very proud.

He also taught us to shine shoes the correct way, our shoes always had a military shine. He told us a lot could be known of a person by looking at their shoes. To this day I look at people’s shoes, especially if I am going to do business with them.

My father in his years of service never complained he always is his job to the best of his ability. He traveled to Santa Fe Indian Hospital many times (130 miles). No matter the weather. Many times, he delivered babies on the way mostly in the Navajo Canyon area. He took adults and children to Carrie Tingly Hospital, which was originally located in Truth or Consequences known as “Hot Springs” in the 40’s.

I recall a vehicle accident in the Stinking Lake area. It was a fatal accident & one of the survivors was pinned under the vehicle with his arm underneath the vehicle. The only solution was to cut his arm. Which my father did with the assistance and instructing of the doctor. That Jicarilla man lived.

Another time he was on the southern half of the reservation when a snowstorm occurred. He got stuck and couldn't get out so he started walking to the Otero Ranch where a policeman was stationed, Iskoteen Koteen. The weather turned really bad and he got lost in the storm. Because he did not return home at the time, he said he would be back a search party was sent out. Iskoteen found Daddy Juan nearly frozen. He took him to his house and notified everyone my father had been found.

Even though he did not have a medical degree he assisted the medical staff in many ways. In the late 50’s he was given a citation of outstanding work in Washington, D.C. by the U.S. Public Health Department. Daddy Juan was in service with the federal government from his enlistment in 1917 to his retirement form the Indian Health Service in 1964. 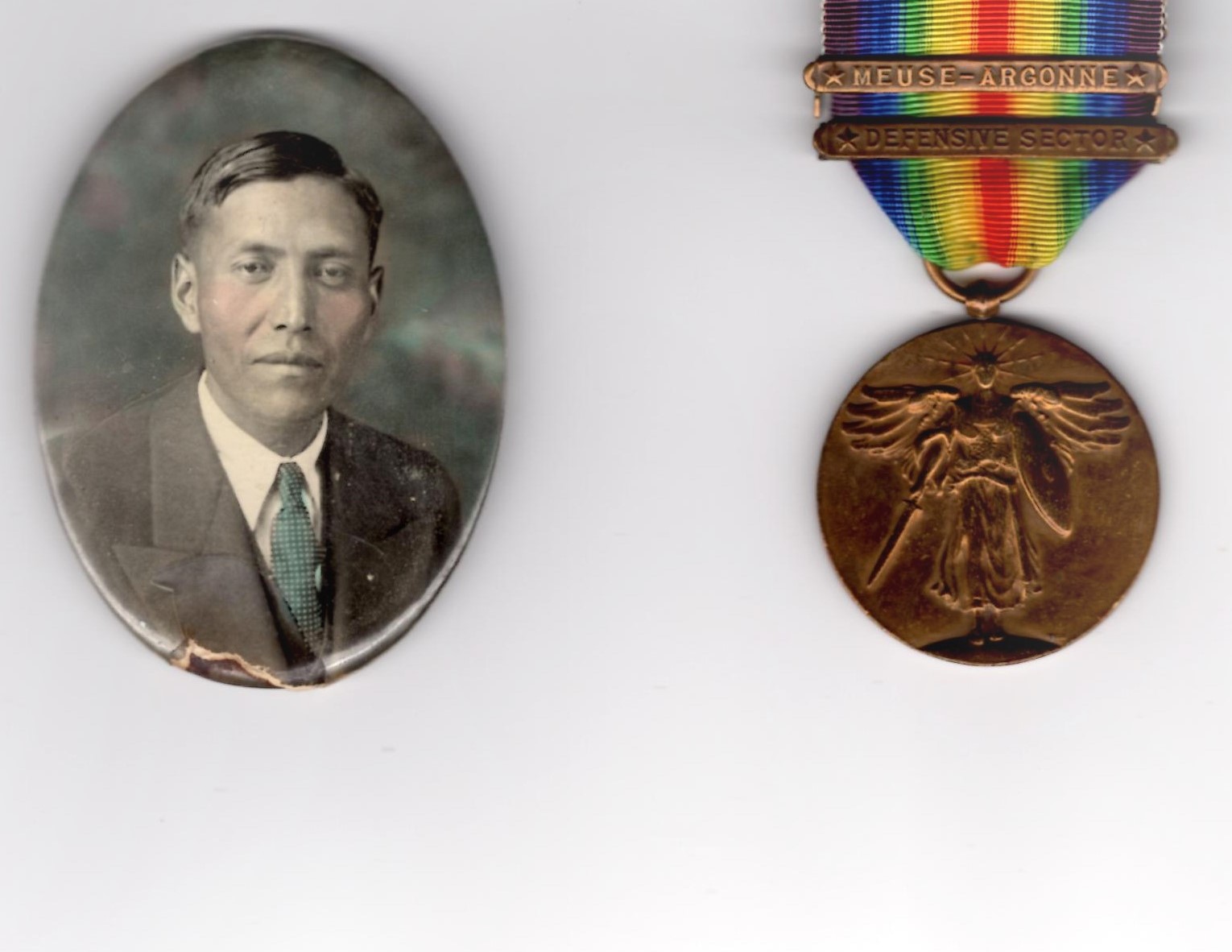 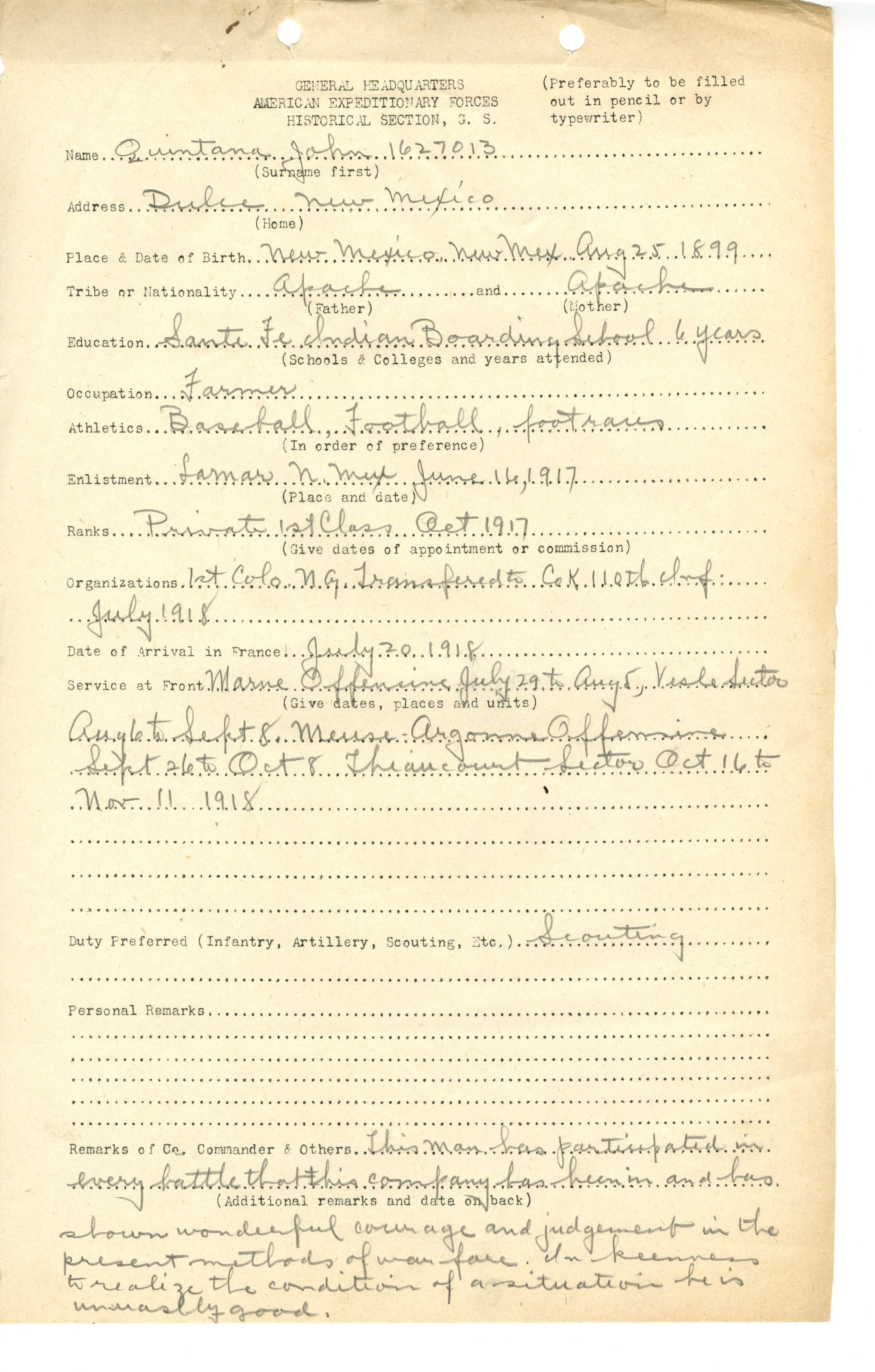 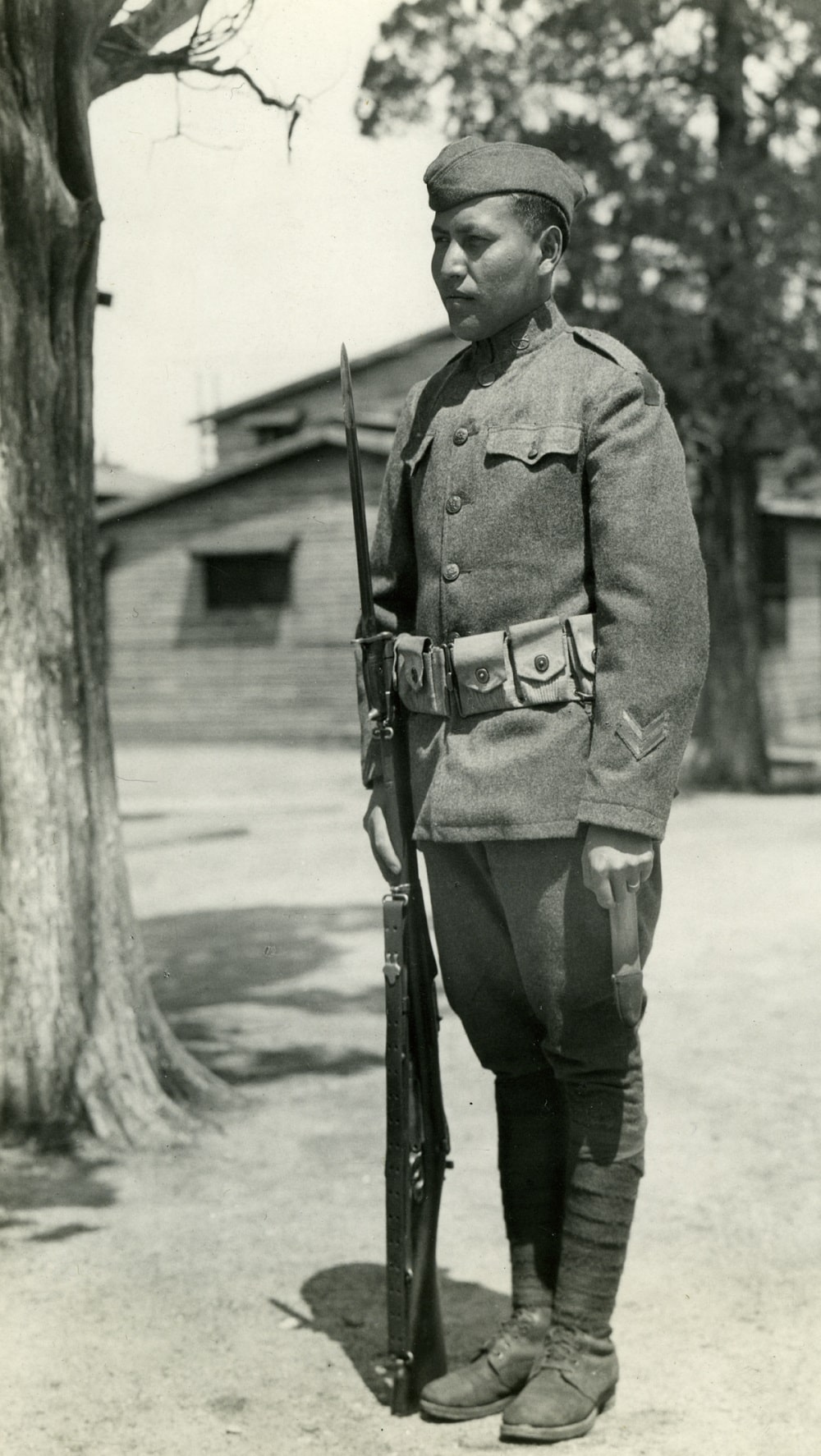