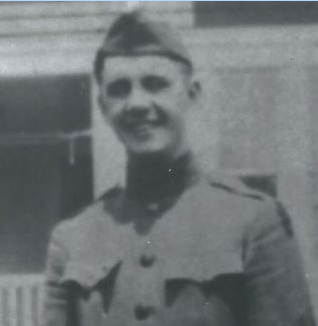 Raymond J Bobbin born around 1897. Raymond Bobbin served in World War 1 with the United States Army. The enlistment was in 1917 and the service was completed in 1919.

A significant centennial in our human history is upon us. In the second decade of the twentieth century, war on the Western Front in Europe had been sputtering and dragging along through an agonizing and bloody stalemate for several years. In 1918 when the fighting elements of the American Expeditionary Forces began to meaningfully supplement the efforts of the European Allied nations, momentum began to shift in opposition against Germany and its partner nations of the Central Powers.

In a description of one memorable moment while serving in Europe with Battery A of the 107th Field Artillery, 28th Division, Pennsylvania National Guard, one veteran soldier wrote late in his life, before his death in 1981, in scribbly and barely legible handwriting, that he "saw and felt more war on that one day, 10-30-18, than the other 3 months that we on the front [sic] (Aug. 13 - Nov. 11) R."

At that time, one hundred years ago, young Americans, likely many of whom had previously experienced geography extending no further, perhaps, than the environs of their American hometowns, farmlands, schools, shops and factories, shipped out across an unthinkable expanse of ocean. Many were going to the old countries of their immigrant forebears, to undertake an unimaginable challenge. It was a voyage from which many would not return. One among the fortunate who did return was Raymond Bobbin from Shenandoah, Pennsylvania. He reached his twenty-first year of age during his time serving in Europe.

Throughout their histories, for any number of reasons, veterans of the Great War recorded and chronicled, in varying details, their personal experiences while serving overseas. Raymond Bobbin was no exception, leaving behind a written passage that describes an unforgettable experience during his time in Europe. Ray prefaced his written account of that occasion stating that, “To start the day of Oct. 30, we must go back to Oct 29.”

He described being in the battle theater of the Western Front with his field artillery unit, positioning guns overnight, preparing for a morning attack, in a darkened European countryside. The weaponry used by the 107th was the French-produced 75mm field gun. This artillery equipment was widely deployed among the Allied forces, typically dependable, relatively precise, formidable, effective and lethal.

In late October 1918 the 107th, among several other AEF units, had already been withdrawn from the ongoing Meuse-Argonne offense, and were shipped by rail, safely back from the front, through France, into the Atlantic coastal region of Belgium. There they were deployed to support AEF infantry preparing to relieve wearied French forces in an ongoing western assault on the Germans’ gradually receding line. Recurring engagements in this region of Belgium came to be known as the Ypres-Lys offensive.

Situated in a Belgian landscape of farms and fields, establishing their positions the night of October 29, 1918, preparing for their artillery barrage, orders were received to reposition for a different angle of attack. “So we moved our gun about 25 yds. away, facing the new direction.” In this process of repositioning, Ray wrote that Battery A’s “#4 gun conked out – not badly but temporarily unusable.” He indicated the number four gun crew was ordered to abandon the weapon.

Ray then described how their fighting commenced that night, not necessarily as planned for Battery A. “A Jerry shell then hit the back space of the #4 gun. It would have killed the entire #4 gun crew, if they were still there and if not the #4 crew, our #1 gun if were where we usually [sic]. We fired our covering barrage then started to move forward, 50 yds. Between guns; 50 yds. between caissons.”

Circumstances continued to deteriorate for Battery A. “But then we stopped in a wide open Belgium Block road. We had gone ‘off the map’. We didn’t know where we were. It seems we were using a map of France that overlapped into Belgium; but when the staff decided to change direction of the attack, proved inadequate [sic]. So there we were; strung out on the open road when the Jerry’s [sic] started to shell us. … A shell would hit on one side of the road; then the other. It crept backward toward our gun. A shell on one side of the road, then the other about 30 yds. in front of our #1 gun, it hit the road.”

Ray described an extraordinary scene with friends and comrades struggling and suffering through gruesome and mortal wounds on that Belgium road. He described one of their wounded comrades attempting to hasten his own death with a rifle bayonet. Ray remembered his own fear at that moment and candidly wrote, “I heard them moan. I didn’t get up right away – I was afraid as I said.” When one of his comrades was hit and debilitated by shell shrapnel, Ray wrote, “I was about 15 yds. AFRAID! GROVELING! In a gutter.”

Raymond Bobbin wrote honestly of his vulnerability and humbly of his heroism. Eventually, mustering perhaps a spirit that lingered in most American warriors engaged in the tremendous struggle of that overseas war, Ray found it in himself to rise to the occasion. “But something in the brave blood of my ancestors + courage made me get up and run toward the two wounded. Sgt. Morris and I dragged them to shell holes aside of the road. It was still being shelled.”

Around three thousand five hundred miles from his peaceful Pennsylvania home life, Ray probably wondered how he might survive that deadly European battleground. Perhaps, he looked deep within himself for courage and confidence. Perhaps, he looked toward his faith, and to the sacrifice of his savior for strength. “Then the one stretcher was taken from the fourgon (wagon). It was brought into play. I might mention that a Medical private by the name of Maguire had administered to the wounded in the shell holes. Four of us, Frank Huffman (a 1920 Lehigh classmate of mine), Charley Heller and Blackie Swartz lifted Stevens to the stretcher and carried him ½ mile to the 1st aid station, over a still shelled road. Then back + the same shelled road journey was taken with Beltz.”

A spirit that descended from our early American revolutionaries was taken overseas one hundred years ago and proven to be formidable. Eleven days before the Armistice, when the guns were finally silenced in Europe, Ray and the warriors of the 107th Field Artillery triumphed over an unprecedented challenge and helped to deliver peace, through massive sacrifice, to people inflicted with years of warfare and suffering. A century ago, the American Expeditionary Forces, the comrades of the 107th, and Allied units serving on European fronts and across the globe prevailed in a great and victorious adventure against an oppressive aggressor and unrelentingly resilient foe.

Ray wrote that on the night of October 30, 1918, “5 of us slept in a pig pen with room for 4. Only I shivered. I put one of my hands on my heart ... I put my steel helmet over my face. Thus ended the most eventful day of my life.” He concluded the description of his experience with an accounting of great human sacrifice, "...Our division - the 28th PA National Guard had 35,000 casualties; 3,250 killed in action. Only the 1st, 2nd and 3rd divisions (regular Army + some Marines) had more. 1st had 50,000 casualties."

Fortunately, Raymond Bobbin, like many others, left behind a chronicle of his experience serving in the Great War one hundred years ago. Consequently, on this centennial of the 1918 Armistice, Americans will be reminded of the honorable efforts undertaken by the soldiers of the AEF and their noble ideals of patriotism, fortitude, selflessness and courage. Thankfully, a legacy of these ideals continues today as our American military proudly and ceaselessly defends a global perimeter of protection, preserving our American principals of democracy and freedom throughout the world. 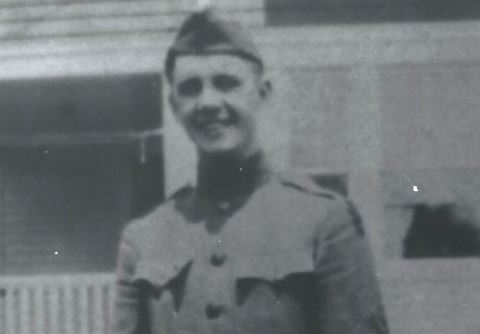