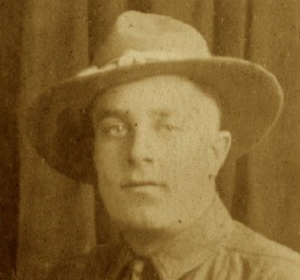 Maurice Herbert Roberts was born in 1900. Maurice Roberts served in World War 1 with the United States Army. The enlistment was in 1917 and the service was completed in 1918.

In gazing at the serene visage of Maurice Roberts, one gets the impression of a young man who has wisdom beyond his years. Just eighteen when he volunteered for the Army, Maurice had seen his mother Carrie pass away at age 39 after a long and painful fight with uterine cancer. As his unit was preparing for overseas movement at Camp Syracuse, New York, he would learn of the death of his nineteen year old sister Melissa from tuberculosis.

In spite of these tragedies, or perhaps because of them, Roberts would fight with reckless abandon on the Western Front. He would be cited twice for bravery by the French government, a very rare distinction for a lowly enlisted man, before being killed in action during the opening stages of the Meuse-Argonne Campaign.

Maurice Roberts was born in Derry, New Hampshire on May 2, 1900, to Albert B. “A.B.” Roberts, a shoemaker and town selectman and the former Carrie E. Nutter. The family made their home at No. 2 McGregor Street in Derry. In addition to Maurice and Melissa, A.B. and Carrie had two older children, Rena and Alvin. Alvin, who preferred to be called by his middle name Burton, also served in the war. He would see heavy fighting while assigned as an artilleryman with the 103rd Artillery Regiment, 26th “Yankee” Division. Burton survived the war, but would die three years before his fortieth birthday. Maurice, a student who probably never held a full time job, enlisted in the Army at age 18 and was given serial number 39184. His stateside training would eventually take him to Camp Syracuse, a mobilization camp located four miles outside the city. Here, he would be assigned to the 9th Infantry Regiment. The 9th Infantry was, and remains, a distinguished regular army unit. They are known as the “Manchus” a nickname they earned during the Boxer Rebellion in China where three of the their members had earned the Medal of Honor.

Before the regiment moved to the mobilization camp in New York, they had been stationed in Fort McIntosh in Laredo, Texas, where they helped support General Pershing’s Punitive Expedition to Mexico. The regiment had also participated in the Battle of San Juan Hill as well as the Philippine-American War. It was while stationed at Camp Syracuse, that Melissa Roberts passed away on July 5, 1917. She was known to one and all as a very attractive and lovable young lady. Maurice’s father was frantic to find him, but didn’t know where he was stationed. Finally, after firing off a number of telegrams to the War Department, he located Maurice in Syracuse. Maurice was granted a three day furlough and was able to attend his sister’s funeral. He had no way of knowing that he too would be dead in a little over a year.

The 9th Regiment deployed to France from Hoboken, New Jersey on September 7, 1917 aboard the U.S.S. Pocahontas. Somewhat ironically for soldiers about to make war on Germany, the vessel that carried them overseas was launched in Stettin, Germany. Christened as the S.S. Prinzess Irene, it served as a passenger liner for the North German Lloyd Line. The ship was seized in New York Harbor when war was declared. Re-designated as the Pocahontas it was quickly pressed into service as a troop carrier.

Upon arriving in France, the 9th Infantry was assigned to the 2nd Division and embarked on an intense period of training before being committed to the trenches. During this time, Maurice was selected be an automatic rifleman and issued with the ungainly and inelegant French Chauchat machine-gun. Referred to as the “sho-sho” by the troops, it was notoriously unreliable and prone to jamming. Nevertheless, in the hands of a skilled soldier, it could be used to devastating effect. It was while equipped with the Chauchat, that Maurice would earn one of his two citations for bravery. One of these citations was mailed to A.B. Roberts by the War Department after the armistice. The envelope contained a French Croix de Guerre medal with silver star (signifying a mention in dispatches at the division level) and an award certificate. The citation was re-printed in a local newspaper and reads as follows:

Having delivered the medal and certificate by registered mail, the adjutant general insisted on requesting a signed receipt.

The struggle for Vaux was one of the culminating actions of the Aisne-Marne Campaign. It was described in one unit history as “a perfectly executed tactical operation to close-out 2nd Division operations around Chateau – Thierry.” The 9th Regiment would next be committed to the battle of St. Mihiel before taking part in the grueling and war winning Meuse-Argonne Campaign. It was in this latter cataclysm, on October 9, 1918, that the young student from Derry would be killed in action. The war would end a month later on November 11, 1918.

Roberts was buried in an American Cemetery in France. At this father’s request, his remains were disinterred and returned to the Unites States. His body journeyed home on the U.S.S. Wheaton. The vessel departed Antwerp, Belgium on August 6, 1921 and arrived three weeks later in Hoboken, New Jersey from whence Roberts had departed for the seat of war just two years earlier. Earlier in June of that year, this same vessel had brought home the remain of Lester Chase, Derry’s first battlefield casualty. His fellow veterans from the newly formed American Legion, now named after Lester Chase, took charge of the casket when it reached Derry and it was transported to the Legion Hall on Franklin Street.

There a funeral service was held on September 18, 1921. The Reverend Frederick I. Kelley from the First Parish Church opened the sad and solemn service with a scripture reading and went on to extoll the soldierly virtues of the young Roberts. It was during the oration that he made mention of Maurice receiving a second award of the Croix de Guerre, on this occasion with Palm. Reverend Kelley also read aloud a letter sent by Robert’s wartime chaplain, Monsignor Joseph A. McCaffery. McCaffrey, who was himself a recipient of the Croix de Guerre as well as the Silver Star, would one day succeed Father Francis P. Duffy of the famed “fighting 69th”, as the pastor of the Holy Cross Roman Catholic Church on 42nd Street in New York City. Known locally as “the Bishop of Times Square,” it would not have been lost on Father McCaffrey that in the Catholic tradition, Saint Maurice serves as the patron saint of the infantryman. The saintly Maurice was born in Thebes in ancient Egypt and joined a locally raised Roman legion where he rose to the rank of centurion. When his unit was called to reinforce the Roman Army in Gaul (present day France), he was martyred for refusing to pay obsequeties to the pagan gods of war.

Derry born Maurice was also called to France as a soldier, only to be martyred in attempting to make the world safe for democracy. Ironically, the men who took his life wore belt buckles adorned with the phrase “Gott Mit Uns” or “God With Us.” Echoing the deeds of valor spoken of by Reverend Kelley, the Father McCaffery’s letter also offered condolences to Maurice’s father. At the conclusion of the funeral service, a procession led by the Derry Brass Band playing a funeral dirge made their way to Forest Hill Cemetery. There, he was laid to rest next to his mother and sister. 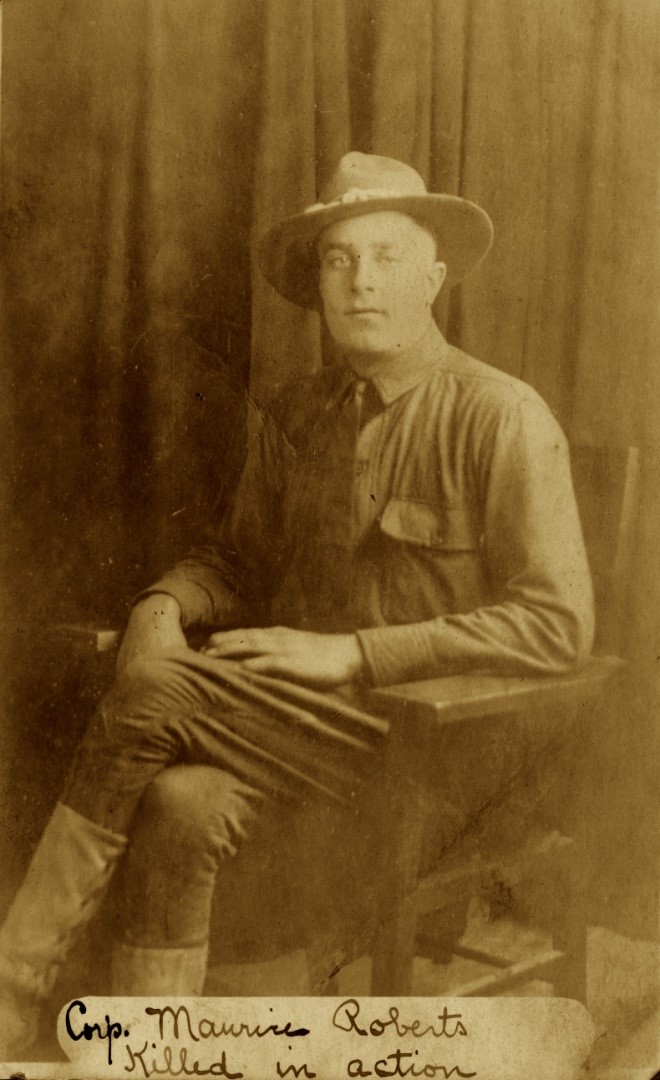