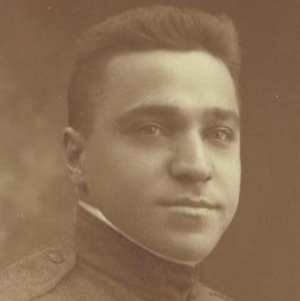 Terzo Cenci was born in 1890 Terzo Cenci served in World War 1 with the United States Army. The enlistment was in 1917 and the service was completed in 1919.

In 1903, Terzo, his uncle, Bernardino Formiconi, and Bernardino's new bride, Rosa Modestini, all came to the United States from Italy on the same sailing of the S.S. Prinz Oskar. Terzo travelled in steerage, Bernardino and Rosa did not. The ship left Naples, Campania, Italy on December 7, 1903, and sailed into New York harbor on December 26, 1903. Terzo was 13 years old. He arrived at Ellis Island with $20.00 in his pocket and was going to join his older brother, Dante, who was living at 112 Elmer Street, Trenton, NJ.

In April 1912, the Cenci Family moved north to New York City, residing for many years in what was then known as Italian Harlem.

Basic training for Terzo's outfit, the 77th Division, took place at Camp Upton (Yaphank), NY, a division comprised primarily of immigrants. A member of the 305th Infantry, Company L, Terzo was shipped overseas on April 16, 1918 aboard the Cedric, a White Star Line luxury ocean liner that had been retrofitted for use as a troop ship. According to Terzo's service card on file with the New York State Library at Albany, Terzo took part in engagements at Vesle, St. Mihiel, and Baccarat. He was wounded and mustard gassed in August 1918. In January 1919, Terzo was transferred to Salvage Company 21 Quarter Master Corps, and promoted to Private First Class in June of that year. He returned to the United States on July 19, 1919 aboard the Mallory and sent to Camp Merritt, Cresskill, New Jersey, as part of a convalescent detachment. Terzo was discharged on August 23, 1919.

In the Monday, December 9, 1918, edition of the Watertown Daily Times (Watertown, NY), Terzo is mistakenly listed as "died of disease" in an article entitled American War Losses.

According to US Army records, the 305th Infantry took part in the following campaigns: Oise-Aisne, Meuse-Argonne, Champagne and Lorraine.

Records of the Art Students League in New York City prove that Terzo was professionally trained. He began studying at the Art Students League in New York City in January 1920 and continued through May 1923. He also studied during the summers of 1920, 1921 and 1922. His instructors were George Bridgman, A Stirling Calder, Boardman Robinson and Leo Lentilli. During the summers he also studied with Duncan Smith and George E. Wolfe. Terzo was elected to membership on November 22, 1922, but was dropped for non-payment of dues in December 1932. (source: Art Students League)

On May 6, 1920, Terzo signed his Oath of Allegiance for United States Citizenship through the Southern District of New York. His citizenship process was accelerated due to his honorable service in World War One.

In the Polk's New York City Directory (Manhattan & Bronx) of 1925, Terzo's entry is as follows:

His brothers Elio and Gustavo are also listed as living at this address.

Also in 1925, as evidenced by a photo on the front page of the Sunday, April 5, 1925 edition of the Buffalo Express, Terzo was commissioned to make a statue of Mark Twain. The photo shows Terzo making a model of the sculpture of Twain standing, with Huckleberry Finn and Tom Sawyer sitting at his feet. It is unknown where the actual statue stands.

Terzo and his brother, Gustavo, are pictured in a photo in The Frederick Post (Frederick, MD) newspaper (February 18, 1928), with Rev. Lincoln Caswell, who bore a startling resemblance to his ancestor, President Abraham Lincoln. Terzo is working on a bust, and Gustavo on a painting. Also in 1928, Terzo created a sculpted plaque of Mrs. Irving Berlin and her baby. At the same time, he modeled a bust of Irving Berlin. (It is unknown how the association with the Berlins came to be; however, it is noted that both men served in the 77th Division during World War One.)

Terzo married Carmela Guarino on October 20, 1932 at New York City's Municipal Building. It was the second marriage for Carmela. They had one child, Madalena Alessandra, born at 2149 - 3rd Avenue, New York City on August 14, 1933.

After the war, around 1940, Terzo served as Commander of Italian World War Veterans of the U.S., Guglielmo Marconi Post 12, NY, NY.

In 1941, Terzo registered for the draft for World War Two (serial number U2662). He was 51 years of age, was living at 231 East 116th Street, New York City, and was working for the Pier 1 Manhattan Survey at Battery Place. Terzo did not serve in World War Two.

COAT OF ARMS: SHIELD: Sable, four bendlets wavy between an oak tree eradicated and the devil of Chateau-du-Diable, all argent.

CREST: That for the regiments and separate battalions of the Army Reserve: On a wreath of the colors argent and sable, the Lexington Minute Man proper. The statue of the Minute Man, Captain John Parker (H. H. Kitson, sculptor), stands on the Common in Lexington,
Massachusetts.

MOTTO: Second to None.

The four bendlets represent the four rivers in France where the regiment fought in World War I: Vesle, Aisne, Aire, and Meuse. The devil represents the Chateau du Diable and the oak tree the Argonne Forest, scenes of important actions in which the regiment participated.

DISTINCTIVE INSIGNIA: A black oak leaf (Quercus robur), stem to base in the form of a devil's tail, charged with four white wavy bendlets. The sample of the insignia was approved 4 November 1926. 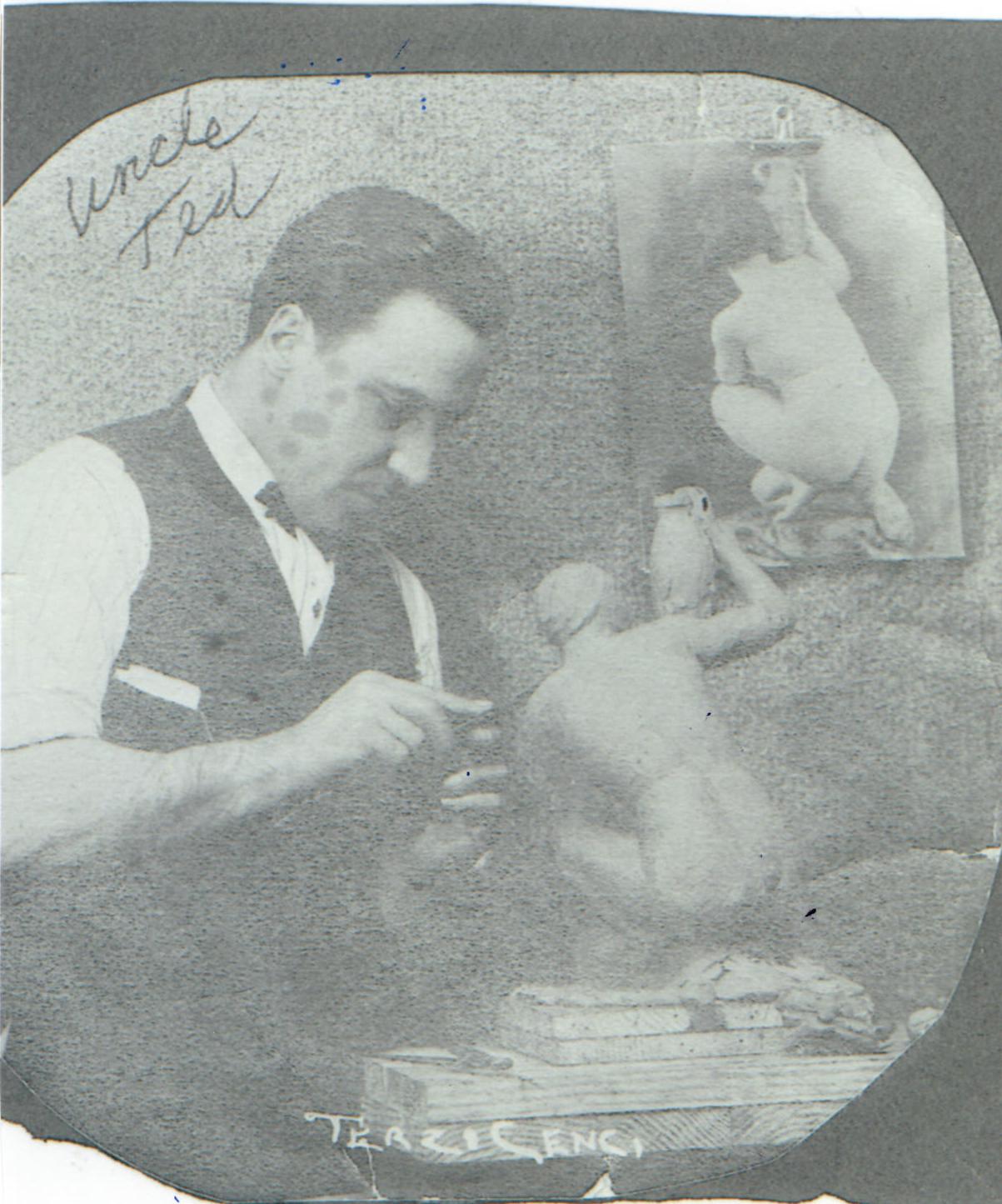 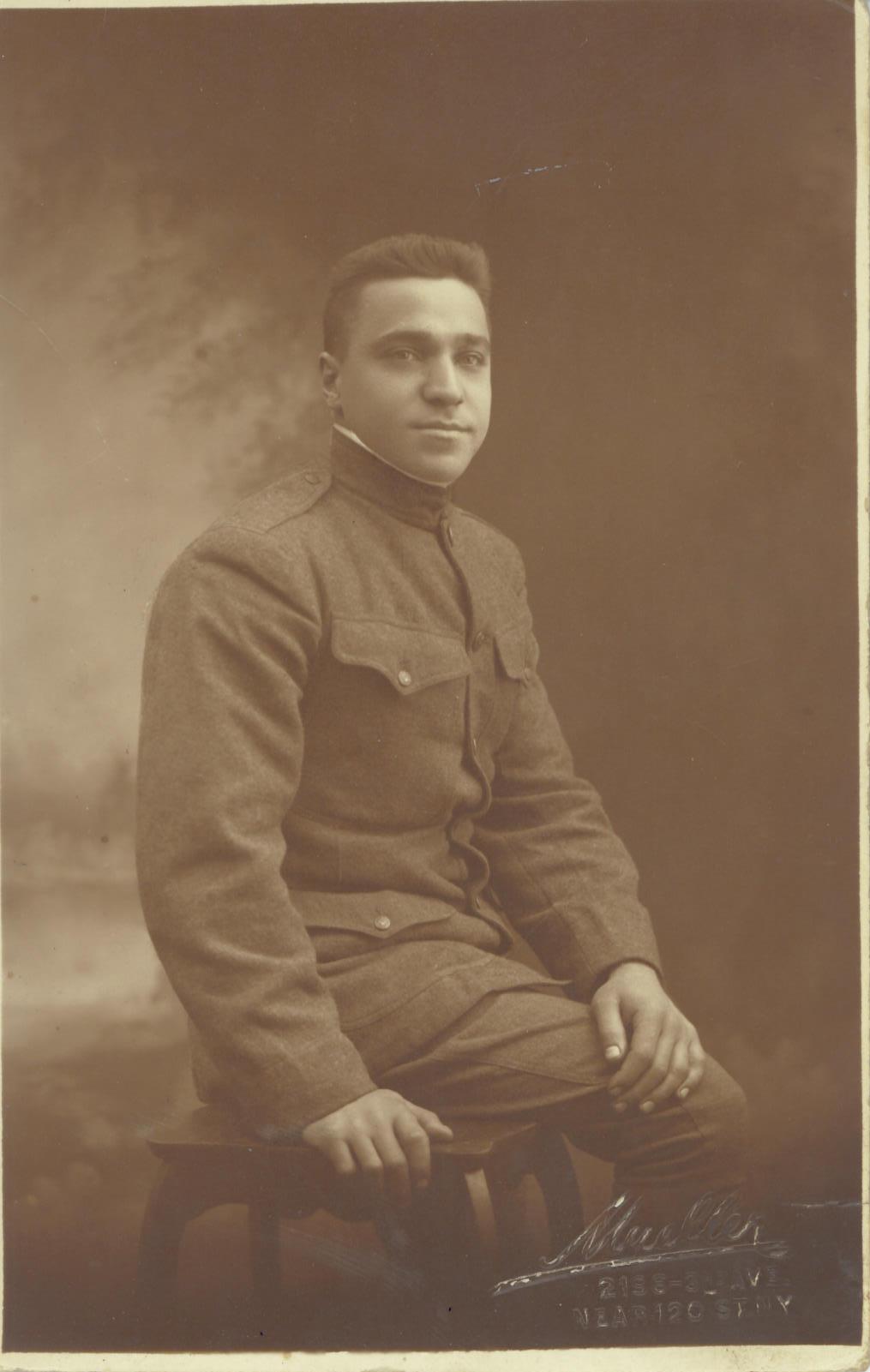