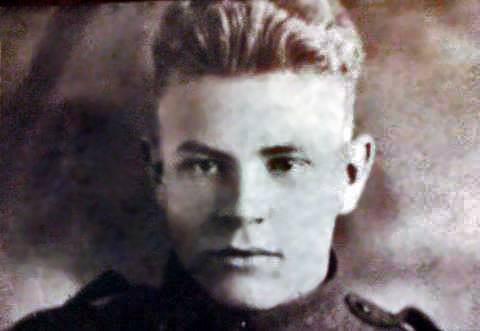 Paul Emerson Riege born around 1900. Paul Riege served in World War 1 with the United States Marine Corps. The enlistment was in 1917 and the service was completed in 1919.

This is a story of my grandfather Pvt. Paul Emerson Riege. He was born on 7 June 1900 in Brookville, OH, which is a small town about 15 miles outside of Dayton, OH. Farming was about all there was to do so when the United States declared war on Germany and officially entered "The Great War" my grandfather, along with many of the other young boys (who quickly became men) ran off to join the military. As the story was told to me by my grandmother, my grandfather's older brother Otto, who was 20, had told the Army Recruiter that his younger brother was only 16 and was too young.

On the next day, which was 19 April 1917, my grandfather visited the Marine Recruiter (by himself this time) and told them that his birthday was 7 June, 1898 therefore making him 18 years of age. Our country was in need of volunteers and my grandfather was a good size guy for his age and was accepted. He did his boot camp training at Quantico, VA and off to war he went. Little did he know that the unit he would serve in (The 1st Battalion/5th Marines) would go on to become one of the highest decorated units in Marine Corps History and would fight in what has become known as the most important battle in Marine Corps history, The Battle of Belleau Wood. He would also fight in the 2nd Battle of the Marne and was WIA on 4 October 1918 during the Meuse-Argonne Offensive.

I remember as a teenager and asking my grandfather why he volunteered, he didn't have to go he was only 16, and he said his country needed him and that he would do it all over again. He also told me that if I ever serve in the military I will understand what he meant. Well, I did serve in the military (8 years United States Air Force) and while my grandfather did tease me a bit about joining the "Boy Scouts" he was very proud of me. It was funny I had gone from calling him "grandpa" to calling him "Sir." That would always bring a smile to his face.

My grandfather was a very proud Marine and was my inspiration in joining the US Military. I would serve 8 years Active Duty in the Air Force. I have come to know how important the Battle of Belleau Wood is and have been told by Marines that from day one of boot camp they are taught of the original "Devil Dogs" of WW1. I was even told by a young Marine who served with the 1/5 in Iraq that my grandfather was (and I quote) "A Real Badass" I took that as such a compliment that the Marines of today hold those Marines of 100 years ago in such high regards and strive to be like them. My "Bucket List" trip would be to one day travel to the Belleau Wood Memorial and to walk in the same footsteps as my grandfather did.

My grandfather passed in March 1990 and is buried next to his wife (my grandmother) in W. Alexandria, OH. Another quick story too (sorry, I love to share stories) is last year I was so honored to have been able to accept my grand father's Purple Heart Medal on his and my families behalf. Since there was not a Purple Heart Medal during WW1, no one in the family knew if he ever tried to get his medal after it was established in 1932. Thanks to the organization Purple Hearts Reunited, I was able to receive a Purple Heart Medal engraved with my grandfather's name, Pvt. Paul Emerson Riege. 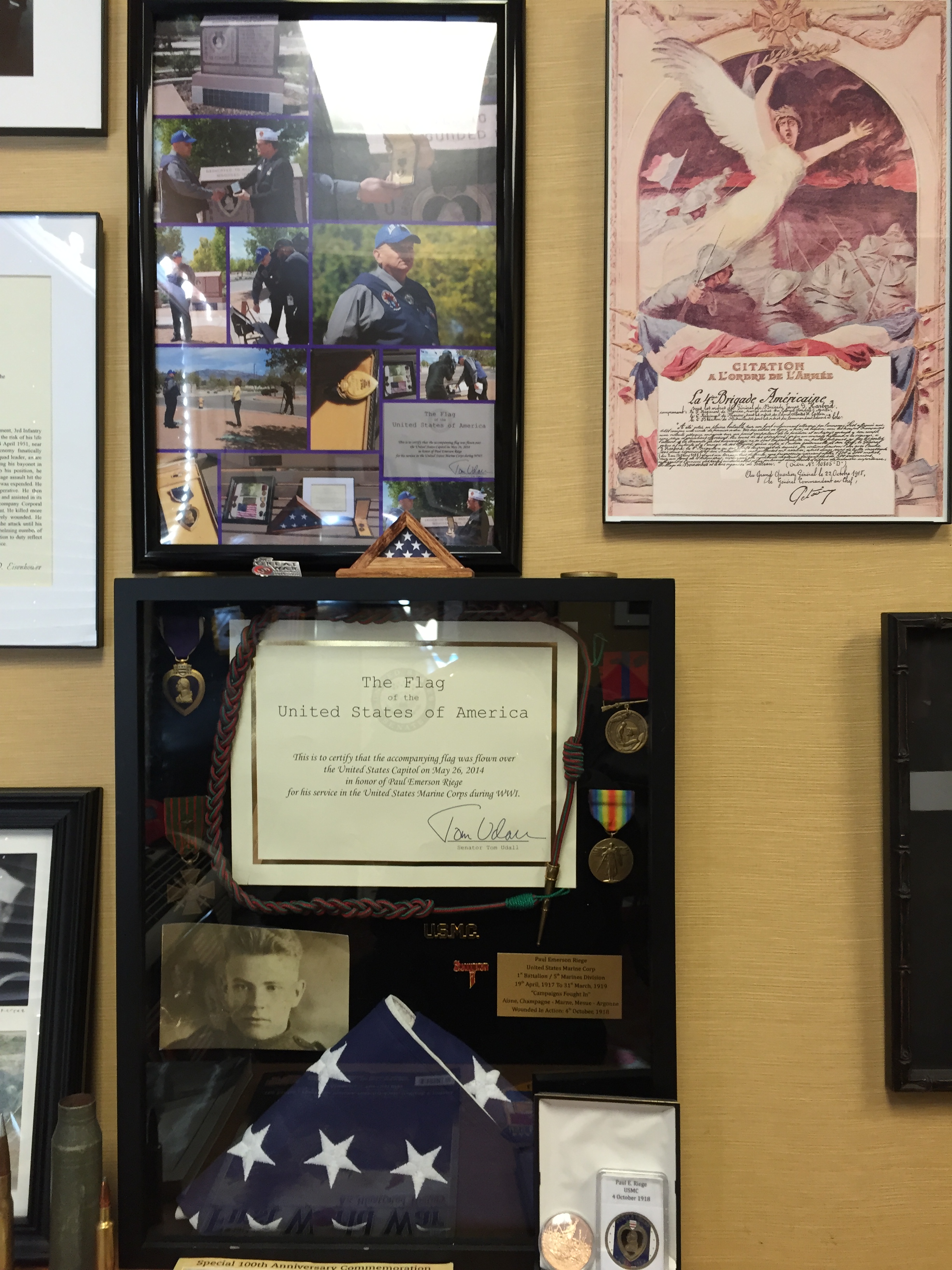 Well, in January 2019 I received a very interesting email from the American Battle Monuments Commission showing me an American Flag that was flying over the Belleau Wood Memorial in honor of my grandfather, Pvt. Paul Emerson Riege, and a few weeks later I received that very flag in the mail. WOW, talk about an honor. This beautiful American Flag, that now is proudly on display at the Comfort Suites in Gallup, NM, had flown over the Belleau Wood Battle Memorial in Honor of my Grandfather. I am so proud of his service to our great country and his place as a Bad Ass Devil Dog Marine. 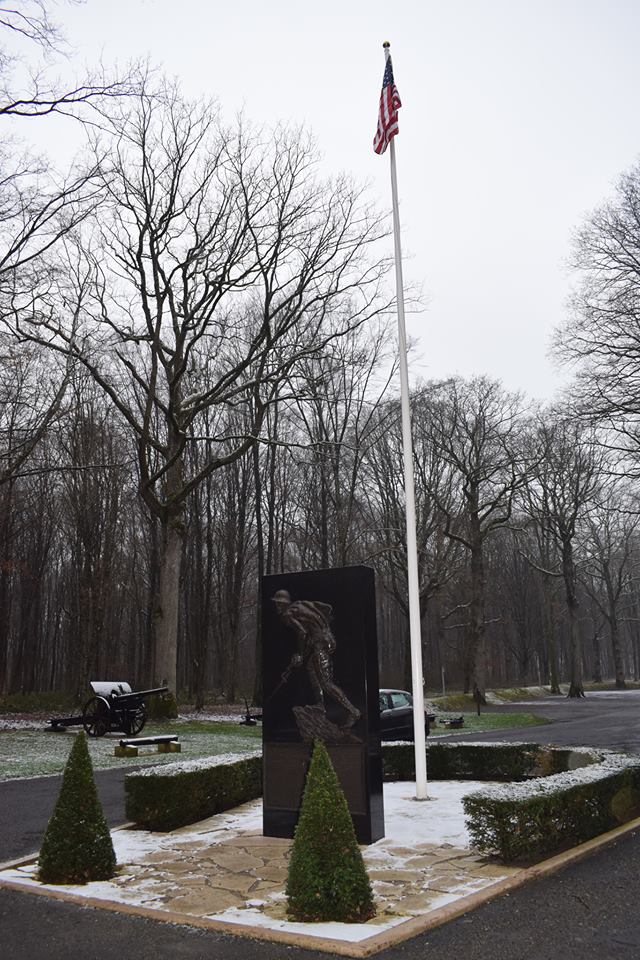 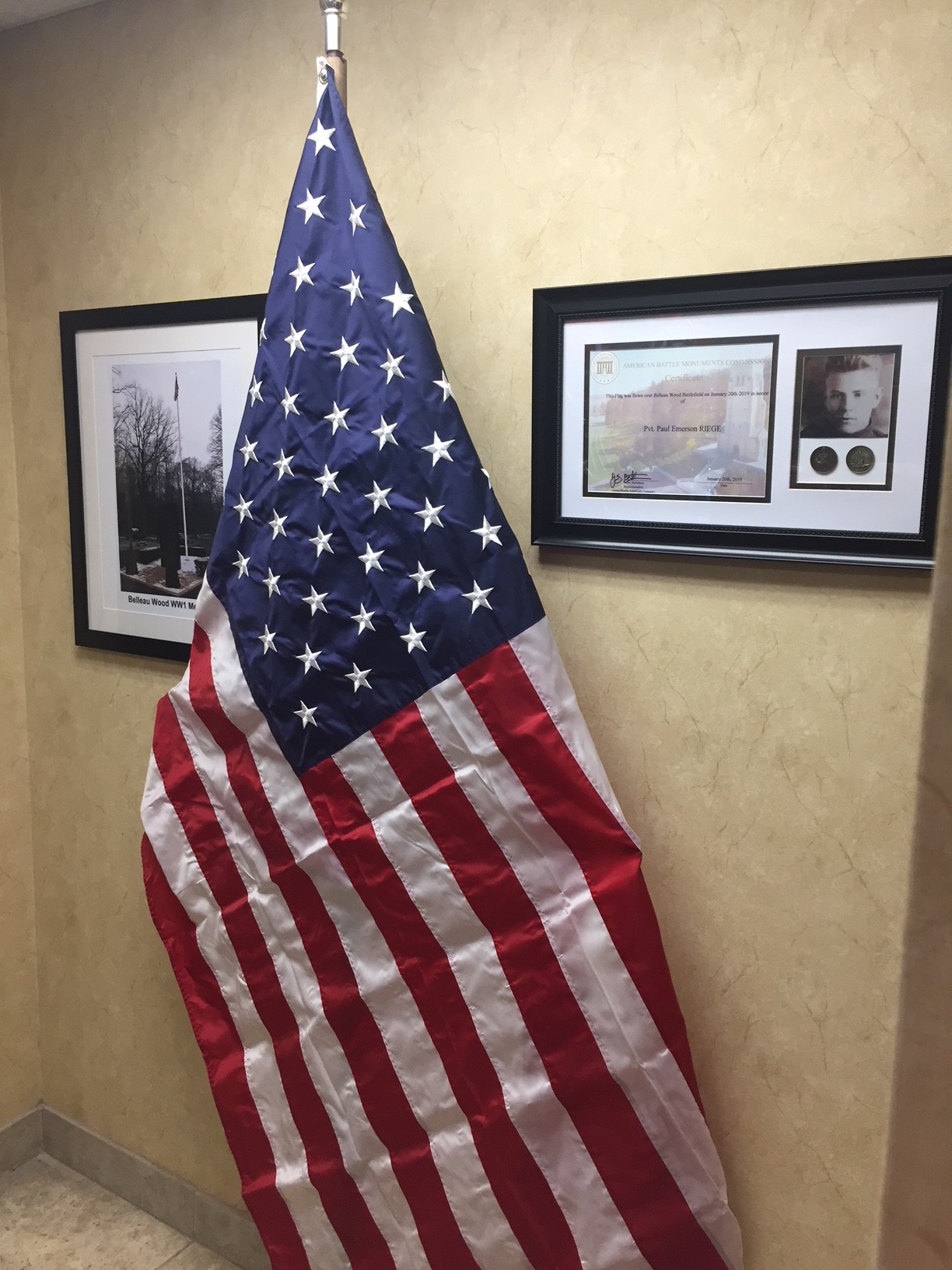 I wanted to add a bit to my grandfather's story if I could. Neither I nor anyone in my family had known that my grandfather had been listed as MIA. The letter below was sent to his mother, my great-grandmother. 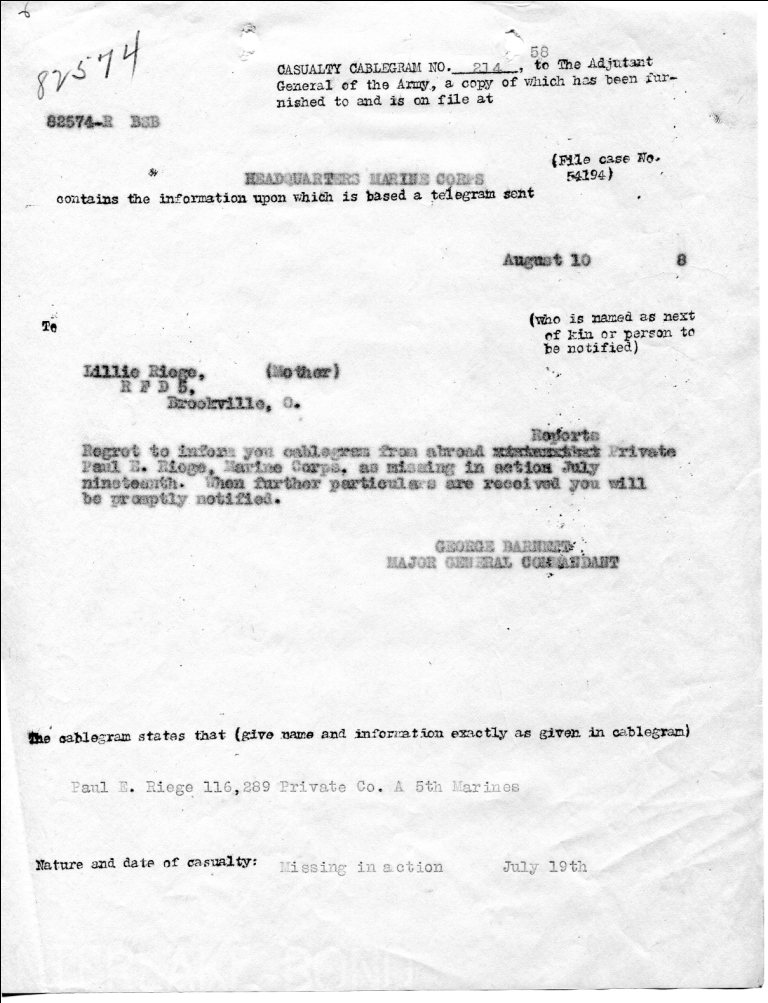 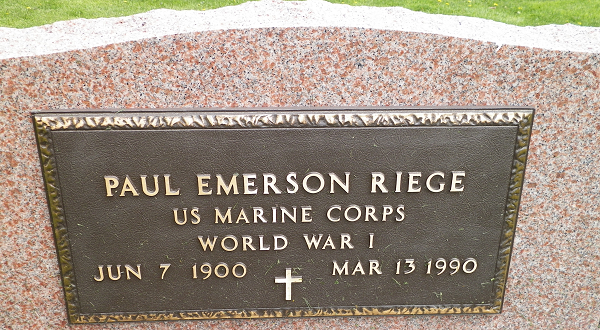 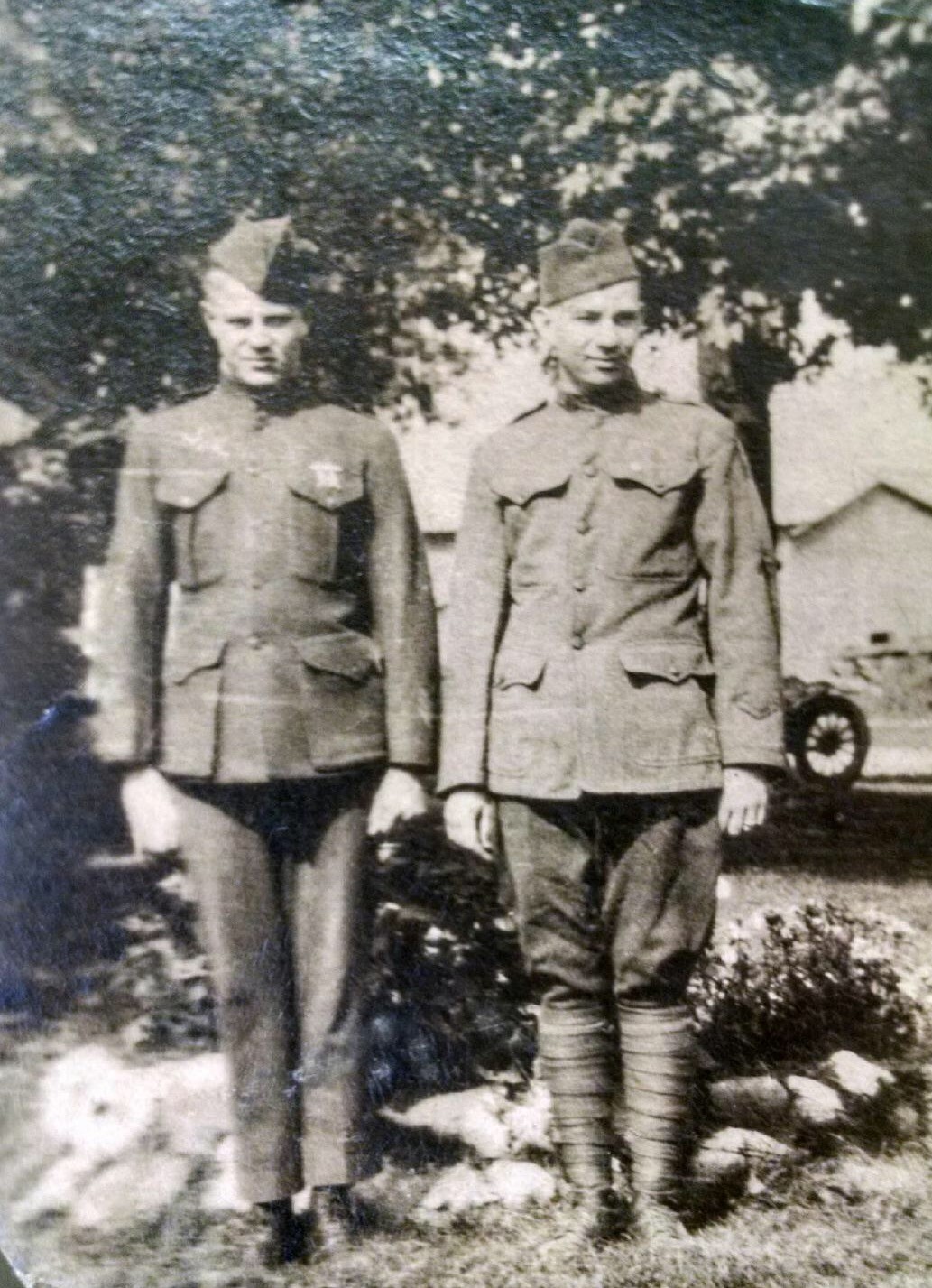