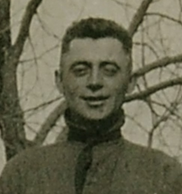 Glen wrote a letter to his sister, Gertrude, while in France but the exact date of the letter was not shown. The letter is as follows:

Somewhere in France
Mrs. Homer Coberly
Dear Sis and Folks,
I will write you a few lines to tell you I am O.K. I received your letters O.K. Sure glad to hear from you. Well Sis, we are going to enter a big drive before long. I think the war will be over by Christmas. At the present time we are on a pretty lively front. But even at that we don't stop for anything. We have good men and also good officers.
Well Sis, I sent the kids $75.00 for Christmas presents. Be sure and let me know if they got it. I sent it by a Y.M.C.G. man. I am sending you the receipt. If it gets lost you can trace it up. The first chance I get I will send some more.
Well Sis, at the present time I am feeling bad. I have been sick for eight days, but I think I'll be all right before long. I received a letter from Dolly Gilbert yesterday. John Saale is in the Hospital. Matt is sick also but not bad.
Well Sis, I will write you one week later so good bye. I send my love to all.
Your Brother, Sergt. Glen Humphrey.
P.S. I will send you a piece of German money I've taken off of one.

The Chillicothe Constitution-Tribune newspaper published an article on Thurs., Dec. 19, 1918, but includes an incorrect date for the death of Glen:

The casualty list for today contains the names of four Livingston county boys, Corp. Irl McClellan of this city, Sergt. Glenn Humphreys, Sturges, Private Clarence Schneider of Chula, and Ira T. Williams, whose address is given as Chillicothe….

Sergt. Humphrey's name appears in the list of those "killed in action." Official notice was received by his relatives from the war department last week informing them of his death in action on Sept. 29 in the same drive in which Corp. McClellan was wounded. He is a son of Joshua Humphreys, a well known farmer residing near Sturges.

Note: The others listed were wounded, not killed.

On Dec. 28, 1918, after the death of Glen, Gertrude received a letter from the American YMCA. The letter is as follows:

Mrs. Homer Coberly
Chillicothe, Mo.
Dear Madam
Enclosed is a Post Office money order for $35.26 which represent 193 francs. Glen Humphrey handed to us to forward to you. These 193 francs amounted to $35.41 less 15¢ charge for money order is $35.26.
As Glen is no longer connected with Co. C and not knowing his address, I kindly ask that you write me upon receipt of money order.
With new year greetings, I am yours respectfully,
Sgt. W. T. Meier
Co. C. 356th Inf.
American Et.

Glen Humphrey and Matthew F. Pendergast were among the first young men to leave Livingston Co., MO for duty in the World War I armed forces. They left together for Camp Funston near Fort Riley, KS and went on to France, serving together the entire time. Matt was with Glen the night he was killed. He sent a letter to Gertrude on Feb. 17, 1919, which is as follows:

Schweich Germany 2-17-19
Dear Friend
I received your letter you wrote the 12th of Jan. Got it last night and will try to answer. I know my letter telling you of Glen's death was a shock to you all, but I thought I might as well tell it for you would hear it anyhow.

Well Gertie, it was on the night of the 10th of Nov., the last battle. We crossed the Mein river in boats and the name of the town after we got across the river close to the place was Pouilly, France. After we got across we deployed and were ready to advance when a shell hit close and there is the place Glen got killed and it was instant death. There were four others killed and several wounded in the same spot. Glen and I was with the 2nd platoon and I was within 20 feet of him. Our Lieutenant was wounded, so I got orders to head the platoon at once, so I didn't get to Glen but I knew it was over for him. It was a terrible night. We were facing machine gun bullets all night. The Germans were all around us. We reached our objective at day break. We dug in and that afternoon we heard about the armistice. We had about 65 German prisoners and maybe you think they wasn't a joyful bunch and we was too. And Gertie we stayed there three days, but couldn't go back. So I didn't get to see Glen any more. But he was buried close to the spot where he was killed and his grave marked with his serial number and name.

I sure was lucky for I wouldn't have given a dime for my chances many a time. I was hit once on the head by shrapnel, knocking me down, and putting a hole in my helmet. If it hadn't been for my helmet I don't expect I would be writing today.

Well Gertie, we are up in Germany in the Army of occupation, but I think we are going to be relieved soon and maybe get started back to the U.S.A. How is your father, Homer, and the children? Give them my best wishes. Hoping to see you all soon. I am sure getting tired of this life over here. We drill almost every day. Took a hike today.

And maybe you think I don't miss Glen. Him and I always went together in the drives and I sure felt bad and will feel worse when we start back without him. Not only I felt bad, but the whole Company did, for Glen was a fine soldier and liked by all who knew him. Our Lieutenant told me he was going to write and tell you all the particulars and perhaps you have got his letter since you wrote. Hoping this finds you all well. I will close.
With my best wishes to all
I am as ever a friend.
Sgt. M. F. Pendergast, Co. C 356th Inf., American E. F., A.P.O. 761

Thirty one soldiers from Livingston Co. MO died either from disease or fighting in France during WWI. In 1921, Glen's body was returned to the United States and he was buried at the family burial site in May cemetery. The Thursday, April 14, 1921, Chula News contained the following article:

The funeral of Sergeant Glen Humphreys, killed in France on November 10, 1918, while engaged in the final battle of the World War, was brought back from France and laid to rest in the family burial ground at the May cemetery. The funeral was conducted by Rev. Warren P. Clark of Chillicothe at the Centenary church Sunday afternoon at 2:30 o'clock. Appropriate music was rendered by a male quartette from Chillicothe. Prayer by the army chaplain. Lesson was read from John, 14th chapter, and portion of 14th chapter of Revelation.

The appreciation of the service this gallant young soldier rendered in behalf of his country was shown by the large attendance at the last sad rites, the largest crowd of friends and relatives that ever assembled together at a funeral in this county. The procession was over three miles long - one continuous line of automobiles.

The final service at the grave was conducted by his comrades with military honors. The whole community feels sad at the loss of the best of young manhood who gave their best service and their lives for their country of which they served. May the blessings of God rest on the family and the whole community of which he was a part. 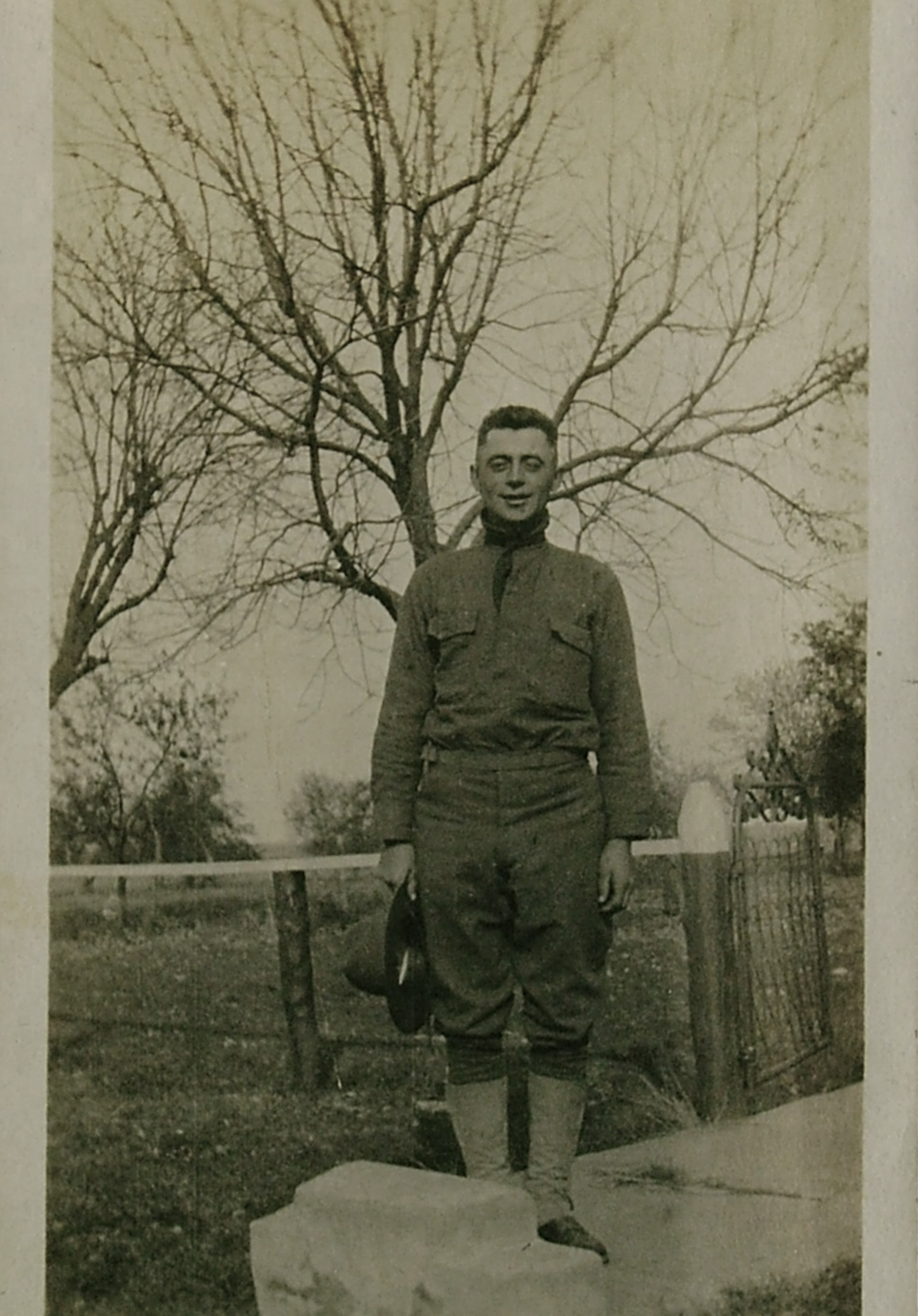 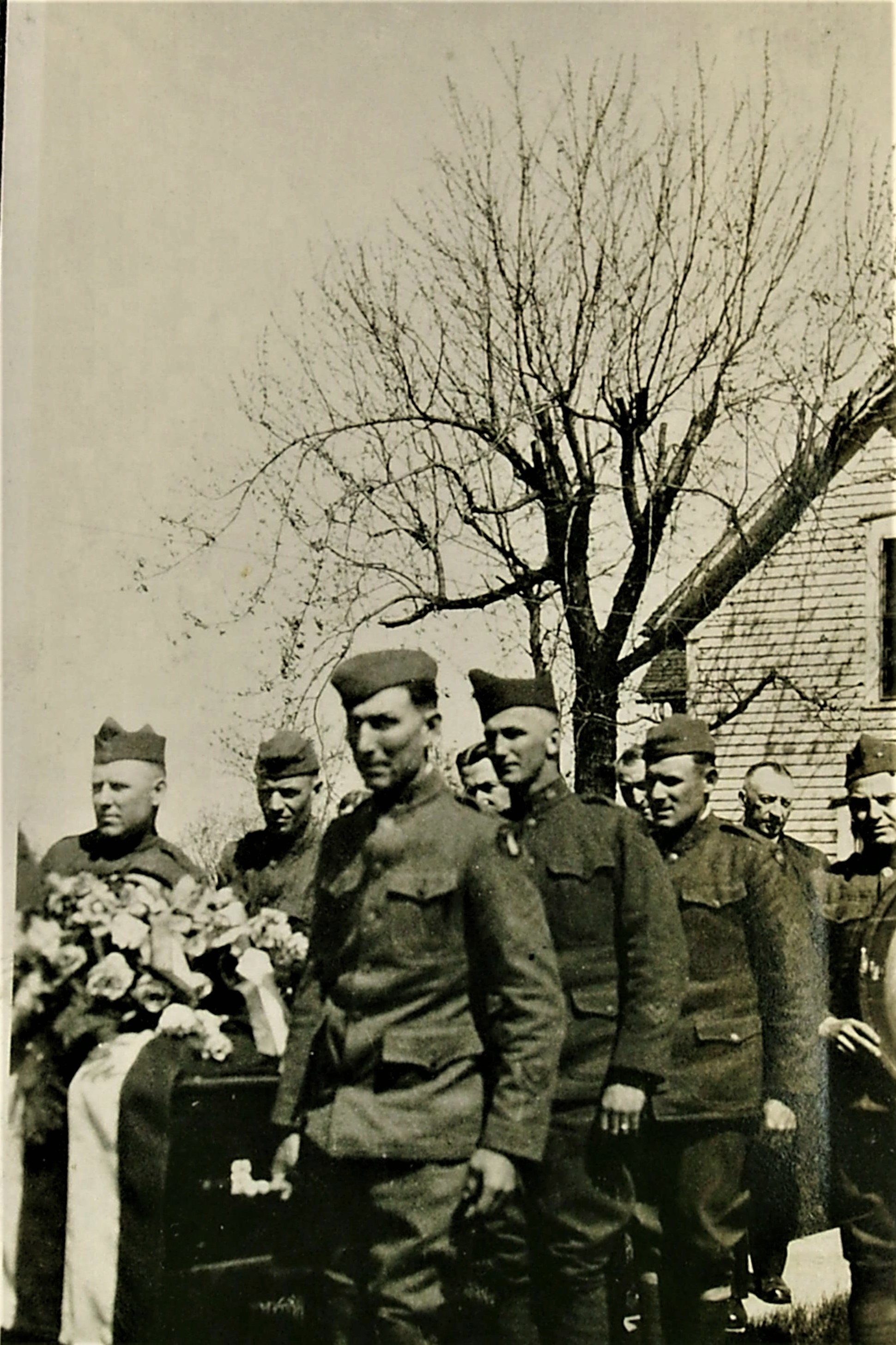 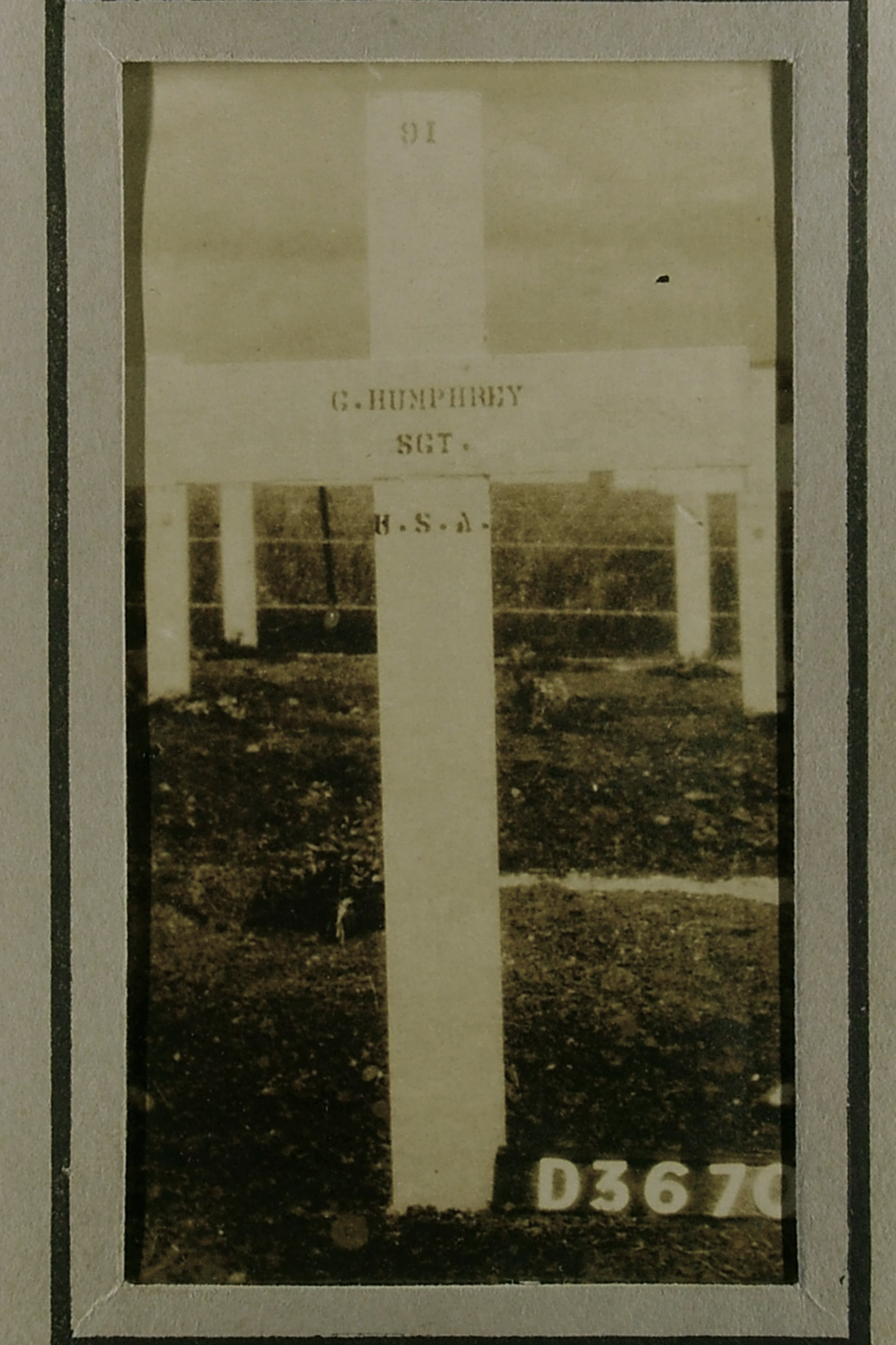