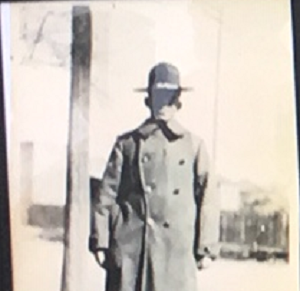 On 27 January, 1880, his employer’s wife died. He said he had been working for 2 ½ years for the man at that time. His boss had to leave to get help in rearing small children, so August was able to buy everything. August was a shoe and bookmaker until he died in 1902. I see many articles in the early 1890s advertising his store, which was partially destroyed by fire in 1896.

Mrs. Emma McNitzky, a native of Berlin, Germany, arrived in Denton with her uncle on 26 Aug, 1883. She lived with her uncle and aunt, the late, Mr. and Mrs. Ernest Mentzel on Bolivar Street until her marriage to G. A. McNitzky in Dallas, Texas on 8 Oct, 1885. They had five children; one of which, William H. McNitzky, started The McNitzky Press in Denton, while still in school. The company was later sold to Mr. Wheeler.

The name McNitzky appears to have been changed by August McNitzky after he left Breslau, probably on the boat coming over, as the name of Klara Machnitzki has turned up in Breslau, although the source has not been verified.
I can’t find any information about Arthur O. McNitzky. I can find him in the census, but in 1910 he is 20 and has no occupation listed. His name does not appear in the newspaper until 1918 and then it’s because his case was dismissed in civil court; the charges were “gaming.” There are several other men listed, so they must have been gambling and having a good time before war. A draft registration card filled out in 1917, lists his occupation as “Pool Hall Employee” employed by E. L. Alexander in Denton, Texas – which is probably where he got a taste for gaming. The card lists him as a having a medium build, with a medium frame, gray eyes, and sandy colored hair.

Arthur was the first Denton County boy to die in WWI. He was buried in the McNitzky family plot in the I.O.O.F. Cemetery and shares a headstone with his father. Emma McNitzky is reported in the Denton Record-Chronicle that she and her daughter, Rosa, traveled to France to claim Arthur’s body. During the Great War, the McNitzky house at 210 S. Elm Street, was subjected to stoning and abuse when some people realized that she was German, a story which is unverified.

He enlisted on 30 Jun 1917 in Denton, Texas and was listed as a Private in Company M, 142nd Infantry Regt., 36th Division, U.S. Army. He was killed in the Argonne Forest battle in St. Etienne, France. The Battle of the Argonne Forest, “also known as the Meuse-Argonne Offensive and the Maas-Argonne Offensive, was a major part of the final Allied offensive of World War I that stretched along the entire Western Front. It was fought from September 26, 1918, until the Armistice of 11 November 1918, a total of 47 days.” [Wikipedia: https://en.wikipedia.org/wiki/Meuse-Argonne_Offensive]

Arthur O. McNitzky enlisted in Denton, Texas, and went to Fort Worth to train at Camp Bowie with the 36th Division, Company M, 142nd Infantry. He was awarded the Croix de Guerre. Before his death he had been “promoted to mess sergeant, and when he reached the front, he was told he had no business being there. McNitzky refused to leave, advancing with the company, and while firing from inside a hold, he was struck in the forehead (by a machine gun bullet) and died instantly.” [Gregory W. Ball’s “They Called Them Soldier Boys”]

“Official announcement of the death in action of Sergeant Arthur McNitzky in France on Oct. 8 was received Friday night by his mother, Mrs. August McNitzky, removing the last hope that the report previously received had been a mistake. Young McNitzky, who was a mess sergeant of Co. M, 142nd Infantry, 36th Division, although not listed as a combatant, took his rifle and went over the top with the other heroes of Co. M. and was the first Denton boy to make the great sacrifice in battle. The message from the War Department was brief and gave no new particulars to those given by Lt. Colonel Alvin M. Owsley in his letter of condolence to Mrs. McNitzky.” –DRC 16 Nov, 1918

From a “Brief Record of U.S.A. Combat Divisions.” [DR-C, 30 July, 1919]
Thirty-Sixth (Panther) Division
The 36th Division, composed of Texas and Oklahoma Guard troops, was organized and trained at Camp Bowie. The division went overseas in July of 1918 and was engaged in the Champaign battle of October 1918. The division was composed of the following units: 141st, 142nd, 143rd, 144th, Infantries. 131st, 132nd, 133rd Field Artillery Regiments. 131st, 132nd, 133rd Machine Gun battalions and the 111th Engineers and auxiliary trains. The insignia of the division, the letter T upon the arrow head is emblematic of the states of Texas and Oklahoma, the home of the division.
Thirty-five young men of Denton County died during WWI: nineteen were killed in action and the other sixteen died of disease of accident while in service. Another sixty boys were wounded. 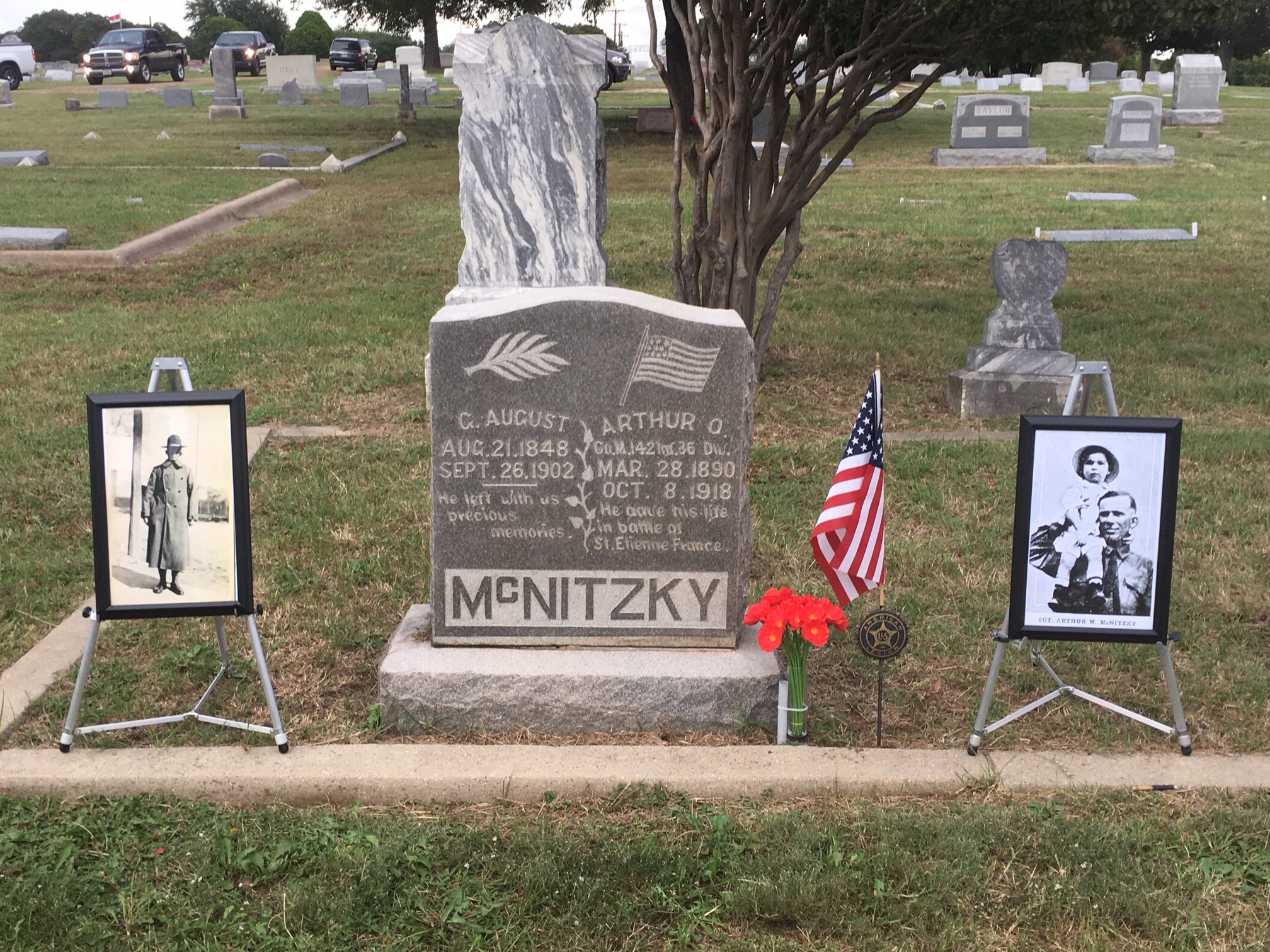