Like it or not, young Ernest was a full-fledged American Doughboy assigned as a regimental runner assigned to Company I, 60th Infantry, 5th Division. Ernest Wrentmore aka Henry E. Monroe was a foot soldier tasked with carrying important military messages during the First World War. Ernest was taking on one of the most dangerous jobs on the battlefield, exposed to snipers, poison gas clouds, machine gun nests, strafing biplanes, and rolling barrages from enemy and friendly artillery.

Thanks to his running and fighting skills, the teenage courier was initially able to avoid injury and death while entering the battlefield and traveling through enemy territory. Earlier in October 1918, Ernest Wrentmore aka Henry E. Monroe had taken what he described as “burst of bullets” in his chest as he was in the middle of a run. The impact of the bullets stunned Ernest into falling, but as he lay on the ground, he realized that the gas mask that he constantly wore around his neck took the brunt of the bullets. The unwieldy contraption was shredded to bits, but he was unscathed.

However, the German soldiers were stepping up their scheduled release of poison gas and Private Wrentmore was not able to procure a replacement mask in time to protect him from the next attack. Made unconscious by the poison gas cloud, Ernest runner was removed from the battlefield by the stretcher bearers to a nearby field hospital, where a shell burst struck down one of the bearers and Ernest was bloodied by a shower of shrapnel. According to his sister, Mrs. Josephine V. Thomas of Akron, Ohio : “...and the next we heard from Ernest was a letter from the base hospital where he was recovering from gassing and wounds.”

Following his recovery, Private Wrentmore returned to service as a runner at the warfront, where he was again gassed and received bayonet wounds in hand-to-hand combat. In 1918, he was discharged at the rank of private at age 14. The gas attacks would result in Ernest’s loss of the use of one lung, leading to recurrent bouts with tuberculosis which led to a 25 month stay at a sanitorium in North Carolina, and his eventual death at age 79 in 1983.

Never one to admit defeat, Ernest took on the challenges of his health and with his lifelong campaign to win recognition from Congress to make him a late recipient of the Medal of Honor for his valorous acts in October 1918 during the Great War. Ernest had been awarded the Purple Heart, along with other medals and citations. According to Ernest’s son Ernest Wrentmore III, Captain Edward C. Allworth, (his captain at Meuse-Argonne) had spoken at one time about recommending him for the Distinguished Service Cross and the Medal of Honor...but the paperwork was never filed or it was lost.

The press loved to follow the latest news surrounding Ernest, including one San Francisco Examiner article on him dated Saturday, June 13, 1931 on his receiving an appointment to the Army School of Aviation at March Field, Riverside. Whether he was being introduced on a 1937 taping of Ripley’s “Believe It or Not” radio show or mentioned in newspaper articles, the title “the youngest soldier in the American Expeditionary Force during the World War” would invariably follow his name.

When America was on the brink of entering yet another world war, every newspaper across the country published headlines like this one in the Oct 17, 1940 edition of the Arizona Republic (Phoenix, Arizona): “World War Youngest Registers for the Draft”. Ernest, born in 1904 was still eligible for the draft as he “would be turning 36 on the 9th of November and was looking forward to serving his country again.” Ernest's Registration Card D.S.S.Form 1 shows that he and his wife (at the time) Roma Carmelita Wrentmore were residing in Redwood City, in California At that time, Ernest was employed by the Electrolux Corporation. This time around, in World War 2, he served in the U.S. Air Force.

In 1981, Representative Gene Chappie (R-Roseville) introduced a bill on Oct 5 to authorize a Medal of Honor for Ernest who was now residing in Penn Valley, in Nevada County. Unfortunately, Ernest didn't receive the Medal of Honor, although he also had other medals including the Purple Heart.

Before the youngest World War 1 veteran "headed West", he managed to publish his memoirs in 1958, entitled "In Spite of Hell", and hosted a radio show as a pianist, composer and vocalist.

Like many of his fellow Doughboys who never recovered from the poison gas exposures, Ernest finally lost the battle to pneumonia in 1983, and he is buried in section 65 of Arlington National Cemetery where the inscription on both sides of his headstone reads as follows: 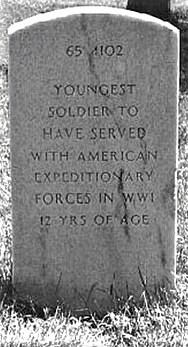