William F. Krone was born around 1893. William Krone served in World War 1 with the United States Navy. The enlistment was in 1918 and the service was completed in 1919.

My Great Uncle Bill...William Frederick Krone was born on May 5, 1893 in North Yakima, Washington to Friedrich and Fanny Krone, formerly of Hamburg, Germany who in October 1880 had sailed over 6000 kilometers to America on the passenger ship North Star, a vessel of English registry. They had come to the United States seeking land and opportunity, and wanted to try their hand at cattle ranching, or farming.

In fact, Great Uncle Bill’s World War 1 Draft registration card dated June 4, 1917 noted that he was 24 years old, unmarried and self-employed farmer on land that he had in Dilo in Dawson County, Montana. His description on the back side included “blue eyes”, medium build and height and dark brown hair.

Records show that in July 1918, WIlliam Krone had entered service in the Navy, and then was ordered to report for training at the Mare Island Naval Base in Vallejo,California as an Apprentice Seaman (AS). He was then assigned to serve on the troopship transport USS Leviathan, a former German luxury liner originally built as Vaterland that was seized by the United States Shipping Board when America declared war on Germany on April 6, 1917. She was re-designated SP-1326 and President Wilson renamed her Leviathan. Although the ship had been sabotaged by the German crew that had been stranded in America for three years because they were taking advantage of the protection of American neutrality, the ship was quickly repaired and refitted as a troopship that could take up to 10,000 Doughboys, per passage to Brest, France and the Western Front.

When Apprentice Seaman William Krone reported for duty on the Leviathan she had already been repainted in “dazzle camouflage” aka “razzle dazzle” (American term) in a complicated design of geometric shapes in contrasting colors that were not to hide or conceal,but to mislead the German submarines as to the heading of a ship’s course, its speed and range.As part of the ship's paint crew, Bill later helped to touch up the fading colors of the "dazzle camoflage" while the ship was docked in Brest.

Great Uncle Bill always looked forward to shore leave, and his visits to Pars and the countryside. He also liked to spend his leave in conversation with the Ambulance drivers, French nurses and with the Doughboys who visited the canteens and libraries. It helped to release the tension that would build up inside him when the SS Leviathan sailed through the dangerous waters where the unrestricted German submarine warfare would be unleashed on an unsuspecting ship like the RMS Carpathia.

Late in September of 1918, as the second wave of influenza started to decimate the armies on both sides of “No Man’s Land”...cases of the influenza started to cut a swath through the 9,000 soldiers aboard the SS Leviathan as she left New York Harbor for Brest, France. The sick bay on the upper level was overflowing with influenza victims. Numbers of the stricken soared from 700 to over 2,000 in 3 days.By the time the Leviathan was berthed at Brest the ship became a virtual petri dish of infections, and 80 nameless men had been buried at sea. As the rest of the sickened men were carried off the Leviathan by stretcher bearers to the base camp, the vile mess left behind by the influenza patients had to be mopped up by the lower echelon seamen, including Apprentice Seaman William Krone. He wore protective clothing and a mask as he helped to bag the bloody sheets from the saturated cots, and cleaned down the filthy floors and walls sprayed with blood and mucus. Bill took frequent breaks topside to clear his lungs and to cleanse the gruesome sights from his memory.

A few more voyages passed without incident. As the anticipated armistice approached in November, the Leviathan had been readied to take the first of the doughboy troops to return to America. With the free time on shore, Bill concentrated on another goal he intended to meet before he was finally back home with his discharge papers in his hand : to bring back a war bride! There was a French nurse he had met a few months ago by Notre Dame in Paris. Her name was Therese Nataline Brondolo and she had also been taking a short leave from her nursing duties to stroll through Paris.. Bill was looking for an adventurous wife who could settle down with him on his homestead in Dilo, Montana. Nataline (she preferred to be called by her middle name) was amenable to marriage and raising children in Montana.

So the war ended, and everyone looked forward to the return home on the troopships. In mid-October 1919, Apprentice Seaman WIlliam F. Krone and his bride-to-be, Nataline, were soon to join his shipmates on the SS Leviathan as the troopship was headed home to America before the U.S. Navy retired the SS Leviathan on October 29, 1919. On December 21, of that year, WIlliam Krone and Theresa Nataline Brondolo were joined in marriage before a Justice of the Peace in New York City and started to head back to Montana. BIll was mustered out of the Navy.

On the trip home, Bill became sick, and instead of taking his new bride to live with him at his homestead in Dilo, they headed out to the home of his sister, Carrie in Billings where the main hospital is located. A quick, but joyous family reunion took place and Bill introduced his new wife, Nataline. As a result,Bill started to feel a little better and he opened the door to bring in their luggage, At that moment, the enumerator for the 1920 census stepped onto the front porch.. When the census worker discovered that Bill and Nataline were staying at William L. John’s residence, he includes them in the record. The published 1920 U.S. Census District ED71 for household ID 48 reads:

William Krone was admitted to the hospital on the 19th of January 1920, and was given a bed as he had been diagnosed with the influenza. A different census worker for this section of Billings recorded Great Uncle Bill in the hospital enumeration which included all influenza patients. As a result, William Krone, guest at his sister’s home and William Krone,admitted influenza patient are listed on two separate census pages at the same time. Bill’s condition worsened and he died on January 20, 1920.

The funeral was held on January 23, 1920 at Smith’s Chapel where members of the American Legion acted as pallbearers. The Yellowstone Post of the American Legion took care of all of the funeral arrangements and military honors for Apprentice Seaman William Krone, including a 21-gun salute and a military headstone for his plot in Mountainview Cemetery in Billings, Montana. If it hadn't been for the intervention and support given by the Billings chapter of the American Legion to the remaining members of the Krone family in 1920, they never would have survived the next decade and I wouldn’t be here to tell Great Uncle Bill’s story of patriotism and courage.

I owe it all to my Great Uncle Bill and the Centennial celebration of World War 0ne. He inspired my establishment of the Idaho World War 1 Centennial Commission back in 2017, and fuels my continuing interest and research of Idaho and Montana Doughboys during the Great War. 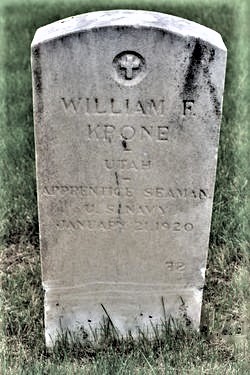