Submitted by: John A. Urbanski {Grand-Nephew}

Joseph Urbanski born in 1895. Joseph Urbanski served in World War 1 with the United States Army. The enlistment was in 1918 and the service was completed in 1918.

Joseph Urbanski was born in Schenectady, N.Y. in 1895 to Prussian immigrants, John Urbanski and Stanislawa Wozniak, and was their fourth of twelve children. According to his siblings, he was strong and would often settle disputes among kids in the neighborhood. Prior to the war, Joe worked as an ice delivery man in the local area from a horse drawn ice wagon with his older brother.

When the US entered the war, Joe tried to enlist in the Army but was rejected because he had flat feet. However, after work he would go to the local recruitment location and would argue for enlistment. He was later drafted into the Army. My Father, who was the youngest child in the family, recalled that before Joe left for training he told his mother (my Grandmother) that he would bring the Kaiser home on a chain. This claim likely reflected my Grandparents known dislike of the Germans who occupied and controlled their region of Poland (Prussia) before they immigrated to the U.S.

Joe was assigned to the 78th Division, 312th Infantry, Company M which arrived in France in mid-1918 and was engaged in battle at various times from September 1918 through the end of the war, including the Meuse-Argonne offensive in the fall of 1918. He was killed by a shell that landed near him on November 1, 1918. Figure 1 shows his service abstract retained in the New York State archives.

Based on the book “The Three Hundred and Twelfth Infantry in France”, compiled by the Three Hundred and Twelfth Infantry Association, published in New York, 1919, during the Meuse-Argonne offensive in late October 1918, the 312th Infantry had been attacking in and in the vicinity of Grand-Pre from October 16th to the 26th; under conditions that were described as severe. The 312th Infantry and is credited with capture of a key high-ground landmark in the town, the Citadel, which was heavily defended by enemy machine guns and artillery.

Following this, the depleted ranks of the 312th Infantry was relieved on October 26th and remained in reserve until November 1 when it again moved forward in support of the second phase of the Meuse-Argonne operation. In support of this effort, the 312th Infantry was ordered to move into Grand-Pre on November 1 and await orders to attack; once a hill on their right flank was cleared of enemy. The men of the 312th Infantry took cover in cellars, dugouts, and the Citadel as enemy artillery continued to bombard the town. It was during this bombardment that Joe was killed.

Word of Joe’s death had not reached home by the time of the Armistice on November 11th. For a short time following the Armistice, the Urbanski family must have felt joy and relief that the war was over and Joe would be coming home. However, a telegram (Figure 2) was delivered to his family on December 3, 1918 that stated he was killed in action.

The circumstances of his death remained unknown until 1919 when local men, who served with Joe in Company M, returned home and visited my Grandmother to tell of his death in France. Based on stories passed down to me from this visit, he was part of a group who raided the enemy before the attack November 1 and was involved in capturing a few prisoners. Consistent with the above summary of the activities of the 312th Infantry at that time, the visiting men also told that his unit was being held in reserve on the day of the attack. However, during an enemy artillery bombardment on November 1, a shell landed near him. He was severely wounded but was found to be alive. It was said that someone put a cigarette in his hand but he could only hold on to it and he died shortly thereafter.

His remains were transported to the US in 1922 and he is buried in Arlington National Cemetery. A photo of his grave stone is attached. There are no known photos of him. 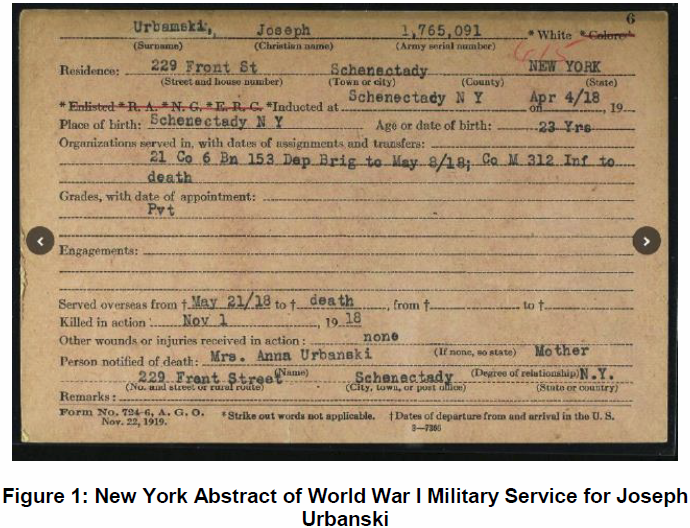 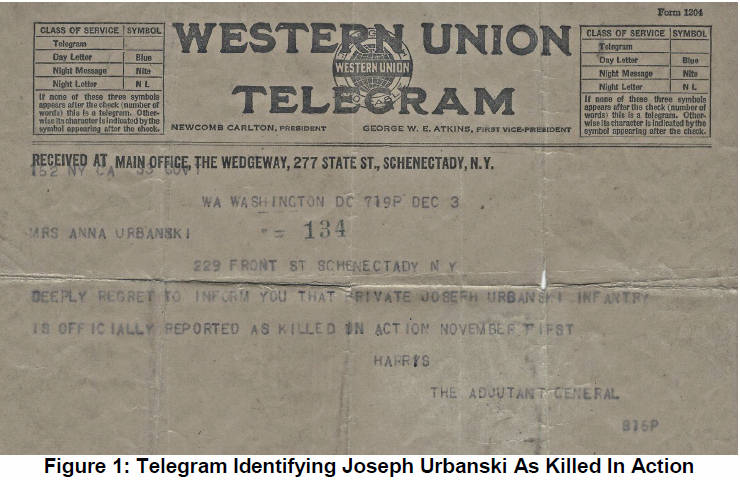 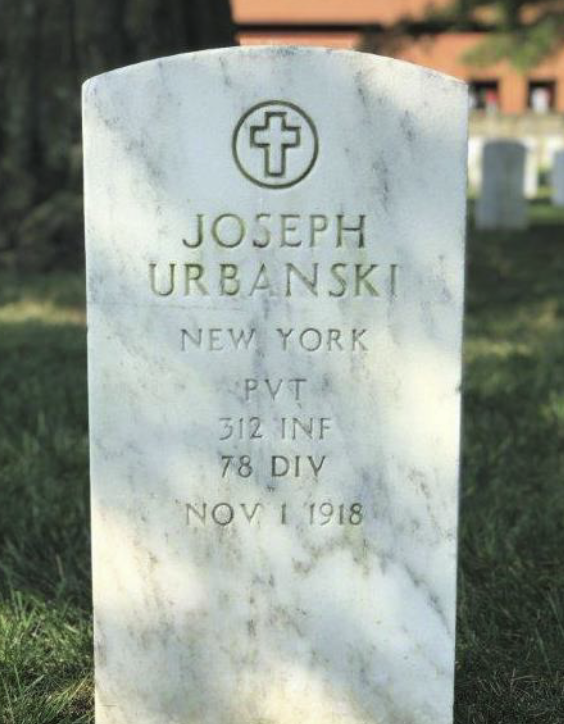