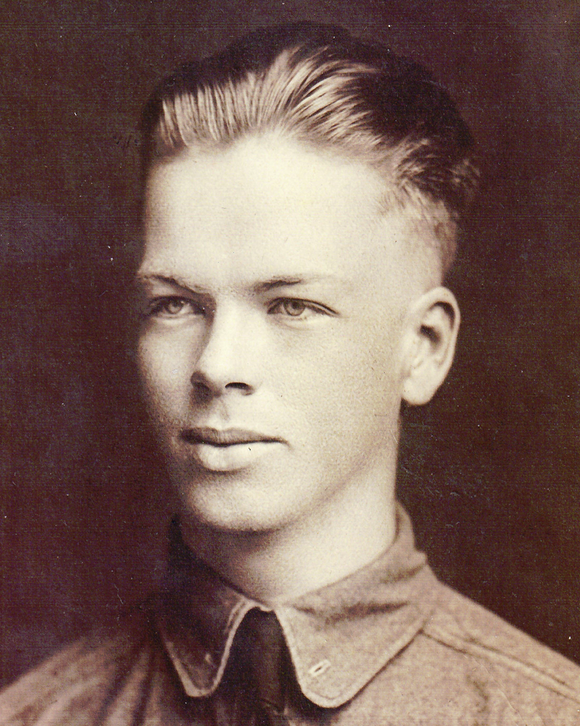 On May 25, 1917, just one week after Congress passed the Selective Service Act, but before the first draft, Lewis, aged twenty-two years, enlisted in the Texas National Guard in Austin. He listed his occupation as “actor”, a career he had begun in high school and continued on stage in local Austin theaters. On July 5, 1917, he was conscripted to Camp Mabry, near Austin. From there he was transferred from to Camp Bowie, outside Ft. Worth, Texas, and assigned to Truck Company #2, 117th Supply Train, 42nd Division. While there he began his “Dearest Mother” correspondence, which he continued faithfully throughout the war.

"Setting up camp was awfully hard, and fiercely hot … This camp is certainly not 100% finished, in fact, I don’t think it’s even 50% … big enough for 50,000 troops … As far as one can see it’s mess shed after mess shed … water is hauled in barrels for a distance of nearly 2 miles."

While stationed at Camp Bowie, Lewis Lacey was promoted to Corporal. On August 31, 1917, his company was shipped east. On a postcard he described the trip: “The train is fourteen coaches long, all Pullmans, carrying 500 men.” One can sense Cpl. Lacey’s pride in their arrival in Memphis, Tennessee, where they were ordered to de-train and to march to the Y.M.C.A. "...showing Tennessee what Texans look like. And believe me, 450 men marching in close column preceded buy the Texas flag, is a sight to behold."

Cpl. Lacey’s next assignment was at Camp Mills on Long Island, New York, where his unit joined with National Guard units from twenty-two other states to form the 42nd “Rainbow” Division. Serious training occupied at least eight hours a day as his company prepared for transfer across the Atlantic to face battle in France. Once aboard the transport ship, he wrote

"Dearest Mother, … when you receive this you will know that we have disembarked safely “over there” and that everything is fine … We are well quartered, well fed, and surprisingly comfortable …"

They landed at Brest, France, on Nov. 12, 1917, one of the first shipments of newly minted American soldiers to reach French soil. From there they were shipped in “... funny looking little train cars…” to Vaucoleurs, southwest of Nancy, in the eastern province of Lorraine. During that cold winter, Cpl. Lacey was billeted in barracks and farm outbuildings in the foothills of the Vosges Mountains of Eastern France, where knee-high boots were necessary in the rain and snow.

In January of 1918 he and a detail of seventy-five men received orders to proceed to the port of St. Nazaire on the Atlantic to meet a shipment of Packard trucks. After a seven day trip driving the trucks across France, they delivered them to the 2nd Division of the Regular Army. It wasn’t until mid-February that his own company’s trucks, 5-ton Pierce Arrows, arrived by rail. By February he wrote:

"I’m beginning to feel as if I’m fully qualified to write a little book, and call it ‘From Civilian to Soldier at the Front in Six Months - How to Do It.”

Later that month he wrote his mother that he was grateful to be a driver for the Supply Train Engineers. Official word had come to him and many of his company that had they not volunteered when they did, they would certainly have been drafted into the regular United States Army, destined to serve in the trenches. He described his truck in a letter:

"These big trucks, which are very slow moving, are very heavy (10,000 lbs.). If you can imagine a circus wagon, the Lone Star Ice Co. truck, and a prairie schooner all rolled Into one, you can get a correct impression of my dashing steed."

Even though France had an extensive system of tracks throughout France, the French trains were needed to ship food and soldiers to the Front, and to retrieve the wounded. Therefore trucks were a necessary extension for delivering armaments, weapons and other supplies over rough roads directly from the rail depots to the battle sites, often under cover of darkness, without even so much as a match to light the way.

Throughout his letters home in June 1918, Cpl. Lacey assured his family of his good health, and reported, “The Company is still intact, with the exception of a few transferred.” For safety, he now drove his heavy truck exclusively by night to the Front, so that the clouds of dust raised on dry country roads could not be seen by German planes and observation balloons. By July, he was completing “... twenty-five days of detached service at Div. Headquarters … hauling everything … Spectacular German air attacks continued, and the 42nd Division “ … has been cited by the French for valor, 3rd time.”

Reading articles from Austin newspapers back home that his mother sent him continued to cheer him up with their coverage of the support of local citizens for the war efforts. Cpl. Lacey congratulated his mother after receiving a clipping that described her involvement in Mothers Groups as well as in the suffrage movement.

By the end of summer 1918, the company was fully operational, delivering armaments and necessary supplies to the Front. Cpl. Lacey described in a letter how on one occasion his was one of seventy-five trucks returning from the Front “ … like a parade …” when they met with enthusiastic fellow Texans from the 36th Division. He felt the end of the fighting was coming soon.
Cpl. Lewis Lacey survived the war.

Following the Armistice on November 11, 1918, the six companies of the 117th Supply Train were sent to follow the German retreat through recently liberated sections of northeastern France and into Belgium and Luxembourg.

“ … The people in the towns through which we pass are wildly celebrating, and nothing is too good for the American soldiers.”

During that first post-Armistice winter, his company was billeted in Bad Neuenahr, a well known summer resort and health spa in northern Germany, where they were ordered to make deliveries of food, blankets and even horse shoes to headquarters. Then in March 1919, Cpl. Lacey left his Company and returned to France through a program of the French government, as one of only fourteen men and two officers from his division who were chosen to study French language and culture at the University of Alix-Marseilles. In a letter to his mother he wrote:

"There are less than a hundred American boys here … Tomorrow we are all to be received at the town’s largest hotel, and at the end of the week there is to be a dance for us … a select old gentlemen’s club is open to us, and we are received with a marked cordiality."

At Alix-en-Provence, Cpl. Lewis took every opportunity to delve into French academics and society. Additionally, he and the other soldier scholars were invited to weekend excursions with local families into the hill country outside of the city, and were even treated to an Easter vacation trip to the island of Corsica. While studying in Aix, Cpl. Lacey, who had written “actor” on his draft registration form, briefly exchanged his Army uniform for a civilian costume in order to act in a play.

At the conclusion of the term, Cpl. Lacey and the rest of the soldiers received formal diplomas. They traveled northwest to St. Nazaire, on the Atlantic coast, to await their places onboard a ship back to the United States. Separated from their own companies, which had already gone home, they remained “casual” soldiers, awaiting an opening in whatever company had space.

Here the letters from Cpl. Lacey end. He returned to Austin and to his family. Sadly, his father, Dr. Lacey, had died in May, so the family reunion Cpl. Lacey had dreamed of and written about was incomplete.

Within a few years Lewis Lacey headed up a theater troupe which traveled throughout the West, producing vaudeville show to enthusiastic crowds. By the 1930’s Lacey had a successful career in radio which led him to California. There he met and married Alice Freiermuth, and they had two daughters.

Lewis Lacey’s brilliant entertainment career was ended by his early death of a heart attack at the age of fifty-seven. Fortunately, his cache of “Dearest Mother” letters from World War I were safely stored within a big, black steamer trunk in the attic of the family home for future discovery.

As we honor the 100th Anniversary of the signing of the Armistice on November 11, 2018, let us salute Cpl. Lewis Lacey. 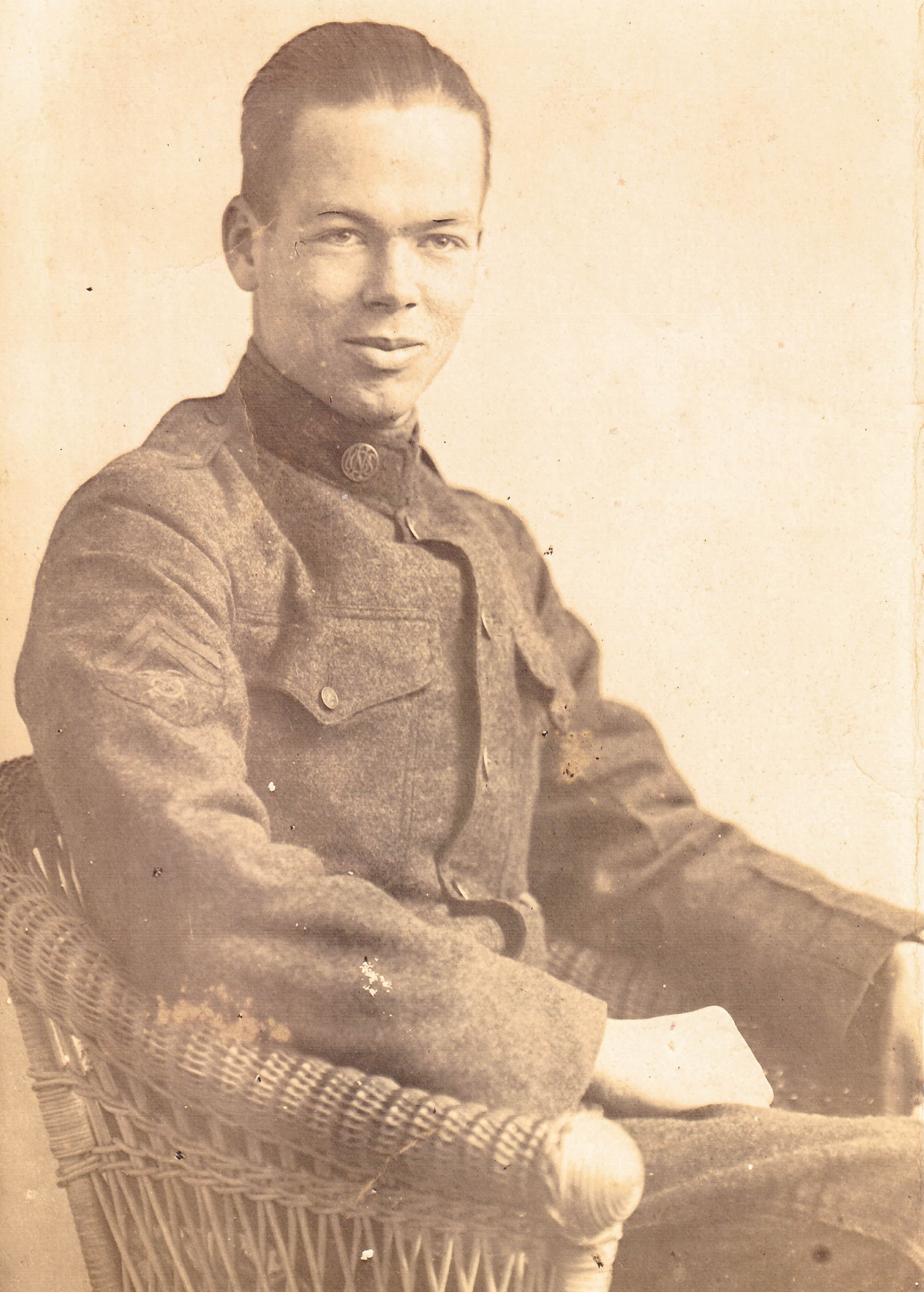