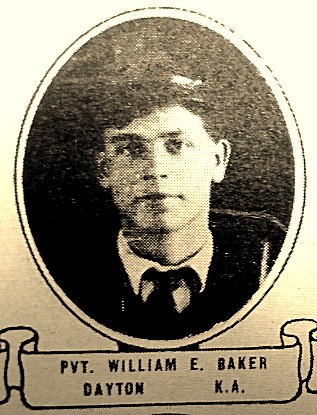 William E. Baker born around 1892. William Baker served in World War 1 with the United States Army. The enlistment was in 1918 and the service was completed in 1918.

I never knew much about my dad’s Uncle Bill, except that he was my Grandpa Baker’s brother and had dated my Grandma Baker’s sister and that he was killed in World War I in France. He had a gravestone in the Dayton, OH National Cemetery, but it was never clear to me whether his actual remains were in Dayton or still in France.

After being contacted by the Secretary of the American Legion Auxiliary, I learned that The William Baker American Legion Post 363 in Lucasville, OH, was named in honor of my Great-Uncle back in Feb, 1920. So I started researching.

William Edwin Baker was born in Nov, 1892, the fourth of five children of Charles & Mary Baker. The family lived in Scioto County, Ohio, at the time of William’s birth. Around the age of 16, William moved with his folks and younger sister to Jamestown, OH. Meanwhile, his oldest brother, George (my Grandfather), had migrated to Dayton. William decided to find out what big city life was like, so he followed his brother to Dayton, where he worked as a Janitor, a Packer, a Motor Assembler, and a Conductor on the Dayton Street Railway line.

Then came the Great War – fast & furious for America. William was inducted into the National Army, and on Apr 26, 1918, was taken to Camp Sherman near Chillicothe, OH for basic training. After only a month & 1/2, he boarded the SS Plattsburgh and sailed for France. More training then followed in France where his first 2 months were mostly uneventful. His Division was never on the front lines and served as a Depot Division.

But in mid-August William was assigned to the 30th Division as a Replacement for soldiers who had been killed. The 30th Division was a National Guard Division composed mostly of guys who had previously trained in the US as various state National Guards. Not so for William – he had no previous military training/experience.

The pace of life (and death) quickened in the 30th. Immediately upon transfer, William was thrust into the Ypres-Lys Offensive in Belgium. From there the 30th marched south into France and fought in the Somme Offensive of Sep 24 to Sep 30. They were able to push the Germans back behind their heavily fortified Hindenburg Line. So far, so good.

On Oct 5 William wrote his last letter to his parents – wish I knew the contents of that letter. Then on Oct 6 the 30th lined up for the next Somme Offensive. The front line of the Division was in disarray and needed to be straightened before they could advance. The straightening operation started early in the morning of Oct 7 – it was somewhat successful, but at a heavy cost in American lives, including our William. Thus, with the Armistice only one month and four days away, the Great War was over for William Baker. He was at peace even as his body lie sprawled on the French soil with a German machine gun bullet in him, awaiting proper burial.

In all my research, I did not find evidence that William Baker had saved any lives nor performed any heroic acts, other than the unspoken heroism inherent in all soldiers of war. His heroism was in being there because his country had called and in following orders, whatever they may have been. As one First Sergeant wrote, “We were having a number of casualties from machine gun fire but the men stood erect, rushing on, pausing only to fire.” The pure misfortune of a random machine gun firing just as William crossed its trajectory ended his life that day.

I didn’t know him, but I love him and thank him for being my friend, because as Jesus said “Greater love has no one than this: to lay down one’s life for one’s friends.” 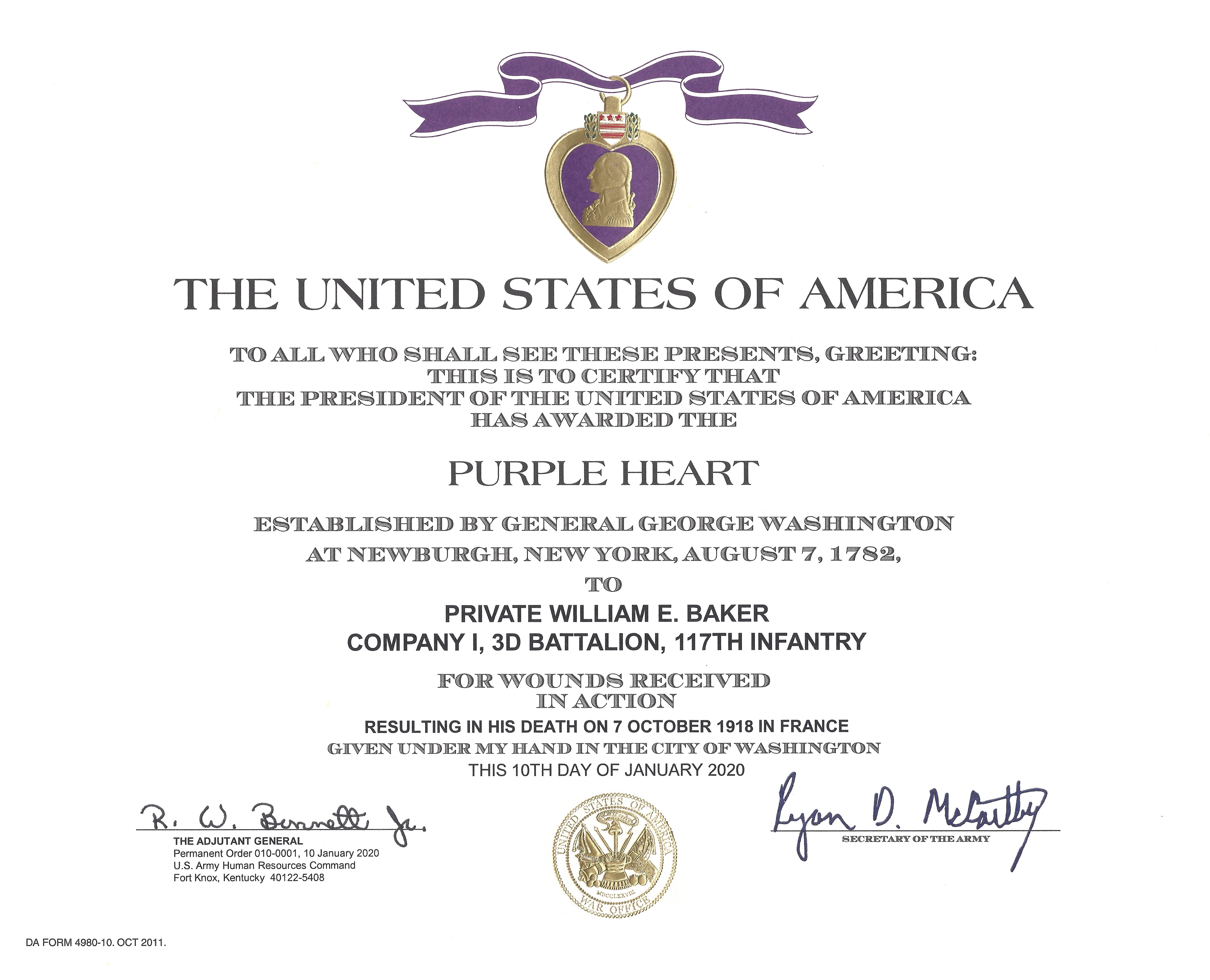