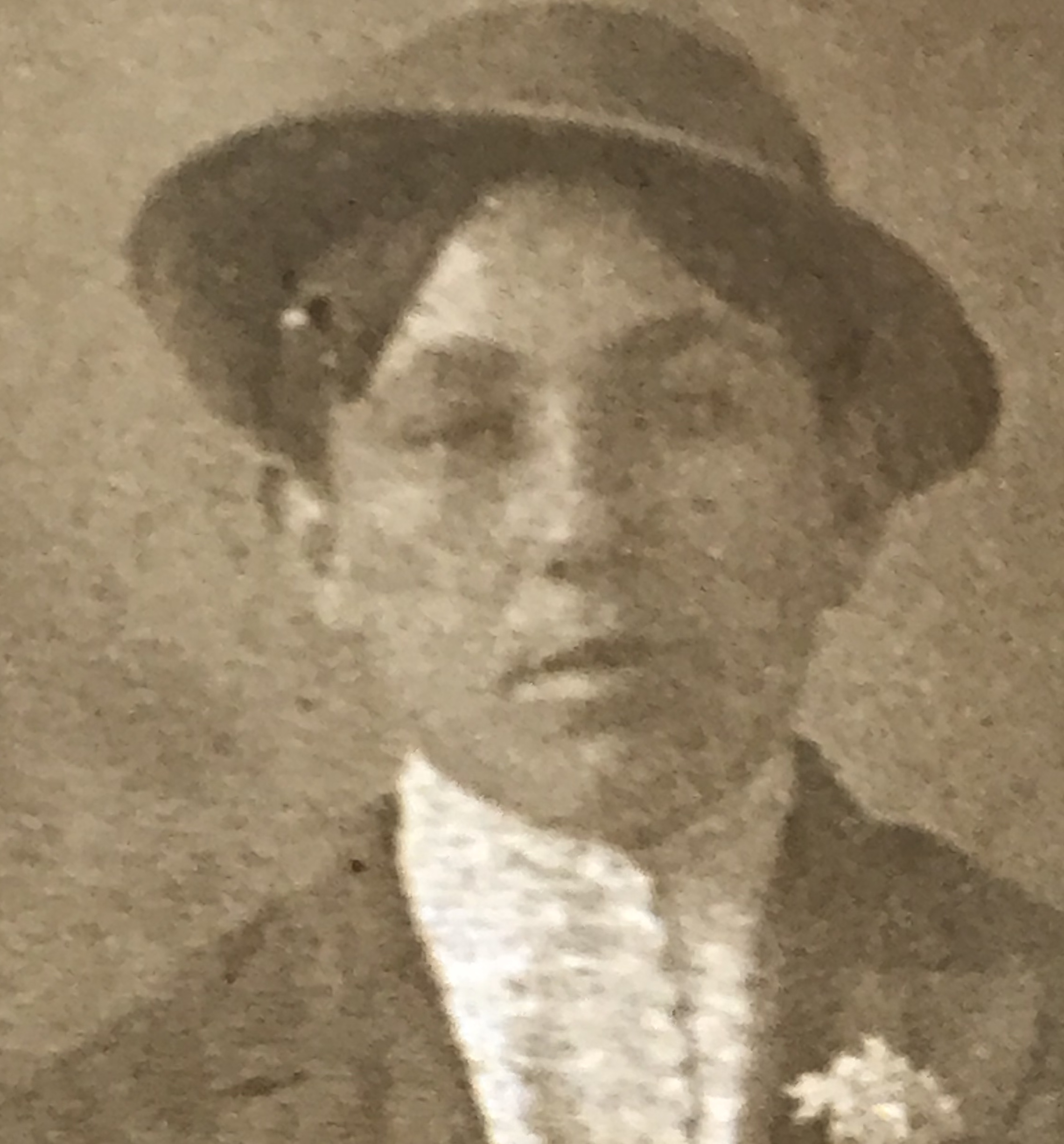 Around 2014, a cousin gave me a copy of a certificate of recognition presented to Fred’s father by the Metropolitan Life Insurance Company. It included his picture, enlisted date of service, branch of service, and that he died from wounds on 11/11/1918. The picture is the only one I have of him. I believe this information came from the Gold Star Records.

In 2016, on Ancestry.com, I came across a publication named “Ohio Soldiers in WWI, 1917-1918” that listed Fred’s death as November 1st and not November 11th. It showed the following:

Fred was living in Cincinnati when he was inducted at age 25. His draft registration card shows he was a cigar maker and shows a birth date of April 8, 1892. His Tennessee City Birth Records show April 14, 1893. The Gold Stars Records is the only document I have that shows where he went for training which was at Camp Sherman in Chillicothe, Ohio.

Per Fold3.com, he sailed from NYC on 9/2/1918 on the USS Aquitania as part of the Co. M 333 Infantry, 84th Division. It appears from the Ohio Soldiers publication that he was assigned to the Ypres-Lys AEF offensive on the same date. Per Gold Star records he arrived in Southampton, England on 9/7/18. On 9/11/18, he left Southampton on the USS Charles crossing the English Channel and probably landed either at Le Havre or Boulogne, France.

What is not known is where he was between 9/12/18-10/26/18. I could not find much information on the 333th Infantry of the 84th Division. Per the 84thrailsplitters.com website, the “84th served in France as a training center for replacements heading toward the Western Front during World War I, and then came home to be demobilized in 1919.” Per the World War I Centennial website, the 84th had formed in Kentucky, but finished its training at Camp Sherman. Per a web discussion group for WWI reenactors the 84th Division was skeletonized, and personnel was sent to the 1st Depot Division.

Per the American Battle Monuments Commission website, “The United States 37th and 91st Divisions arrived in mid-October to reinforce a further thrust across the Scheldt River south of Ghent [in Belgium] This crossing was successful, and the advance continued until Armistice Day.” This was to fight in the second battle of the Ypres-Lys Campaign.

On 10/31/18, fighting commenced. Fred was killed in action sometime on 11/1/18 per the Ohio Soldiers publication. I doubt that he died in Waregem since the 91st was closer to Ghent. He was probably buried in Flanders Field American Cemetery and Memorial in Waregem. Unfortunately, this cemetery does not have information on repatriated bodies.

The picture of his grave site in Belgium shows Co. M 333 Infantry. This appeared to me a temporary grave site. I am not sure why it did not show Co. F 363 Infantry where he was transferred. Though I have not confirmed where he died exactly, the Gold Records stated he was buried in an American cemetery in Waregem, Belgium. In the spring of 1921, Fred’s body was returned to Nashville, TN. He was transported from Antwerp, Belgium on 4/22/1921, and entered Hoboken, NJ, 15 days later, May 6, 1921, via the U.S.A.T. Somme ship. He was buried in Mt. Olivet Cemetery in Nashville on May 15, 1921.

Having no other documentation, in September of 2015, I went online and submitted a request for military records from the National Personnel Records Center in St. Louis. I was told that I had to pay a minimal fee for their research. Per their website, “Requests that involve reconstruction efforts due to a 1973 fire or older records that require extensive search efforts, may take 6 months or more to complete.” But the largest concern was that the Army records of personnel discharged from 11/1/1912 to 1/1/1960 were 80% destroyed in the fire. So, I was sure I would not obtain any data. But to my surprise, I was contacted months later, May 16, 2016, that they found only one document.

I could now submit documentation to the Veterans Administration to obtain his headstone. By October of 2016, the manager at the Mt. Olivet Cemetery let me know that he submitted all the paperwork to the Veteran’s Administration. By Veterans Day, 11/11/16, I received a call from him to tell me they had erected the headstone. I was so glad and asked how much they were going to charge me. But to my astonishment, the manager said it was free of charge because of Fred being a war hero.

Fred was two years old when his parents divorced on August 3, 1895. It appears he never saw his father again. I believe my great grandfather disowned him.

In 1989, when Fred was six years old, his mother married a Martin Givens. Unfortunately, Fred’s stepdad died four years later in a drowning accident in 1902. Fred was 9 years old.

When Fred was 11 years, his mother die at age 31 on November 20, 1904. He then went to live with his mother’s sister, Susie Homan, in Cincinnati, Ohio. And this is where he was eventually drafted. 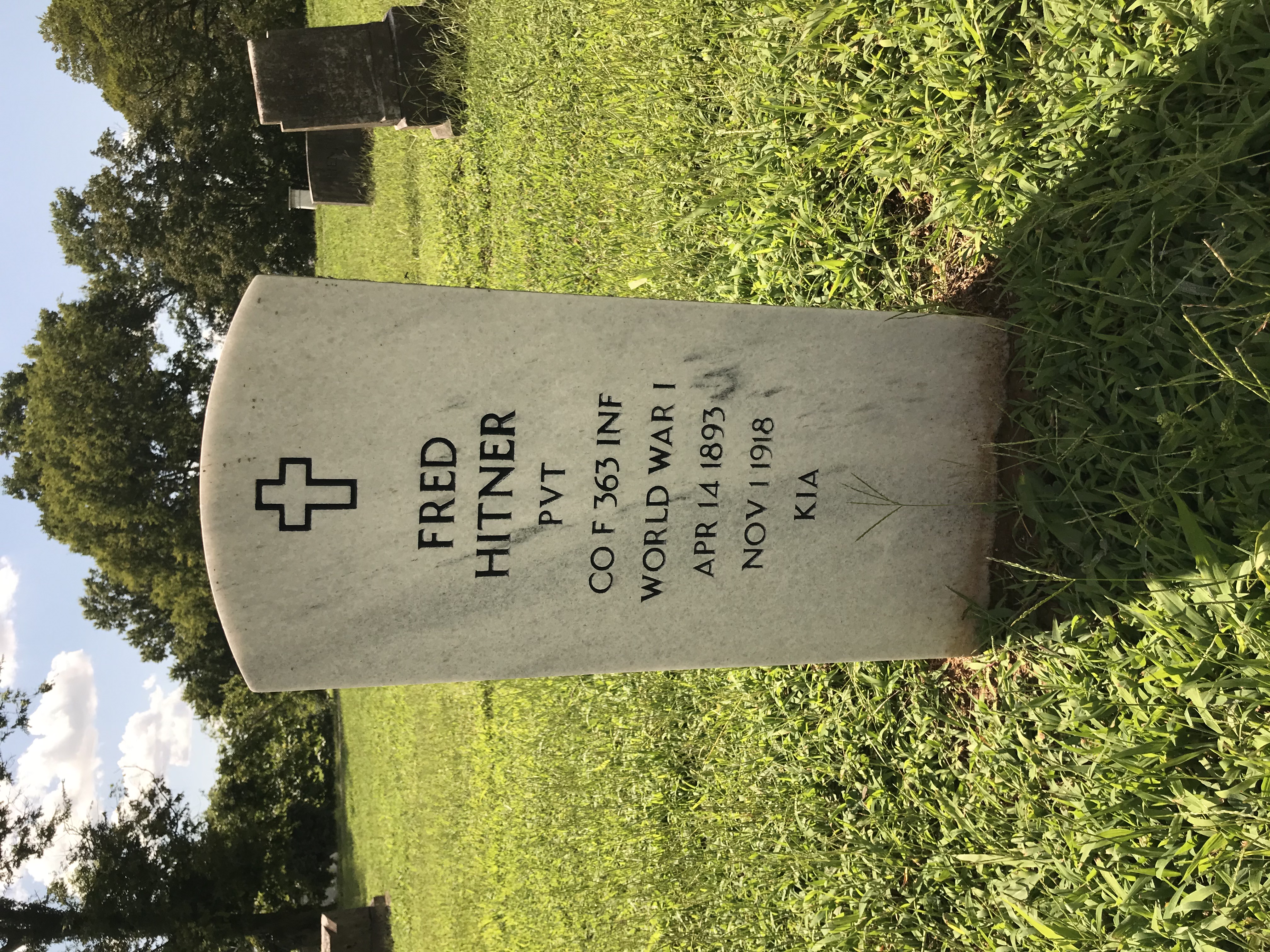